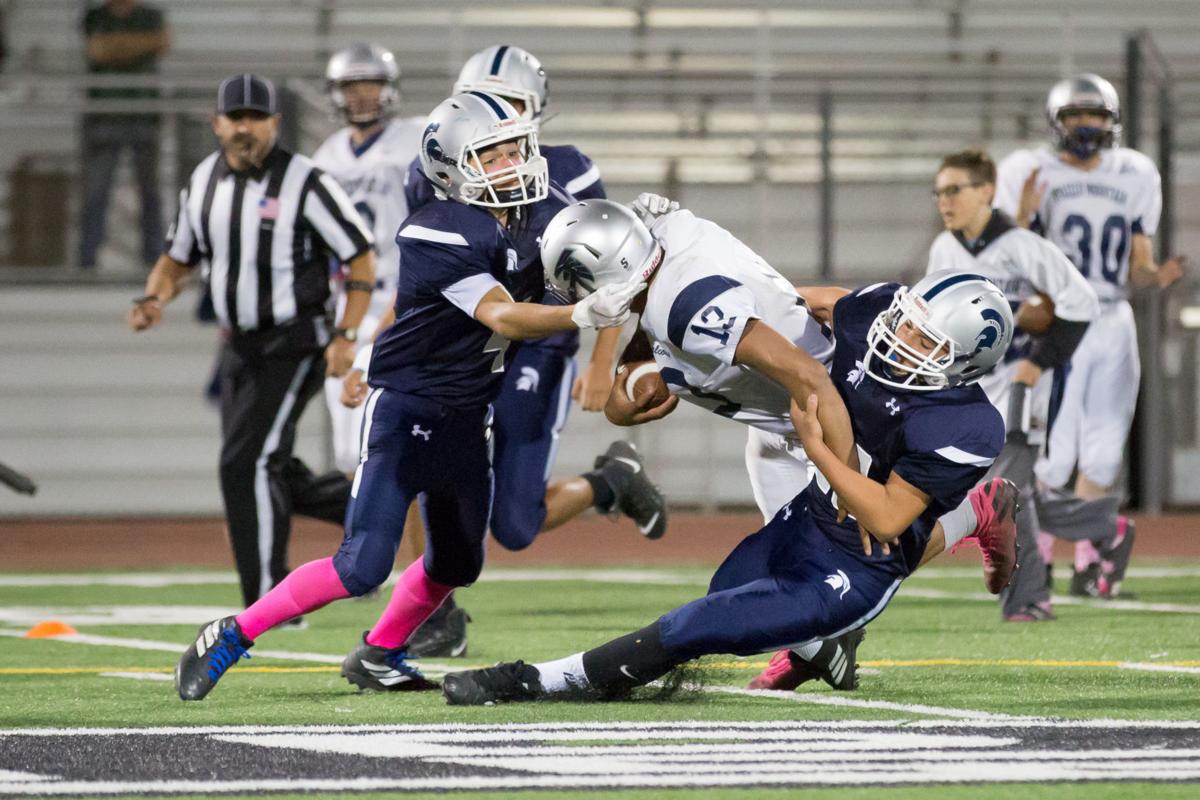 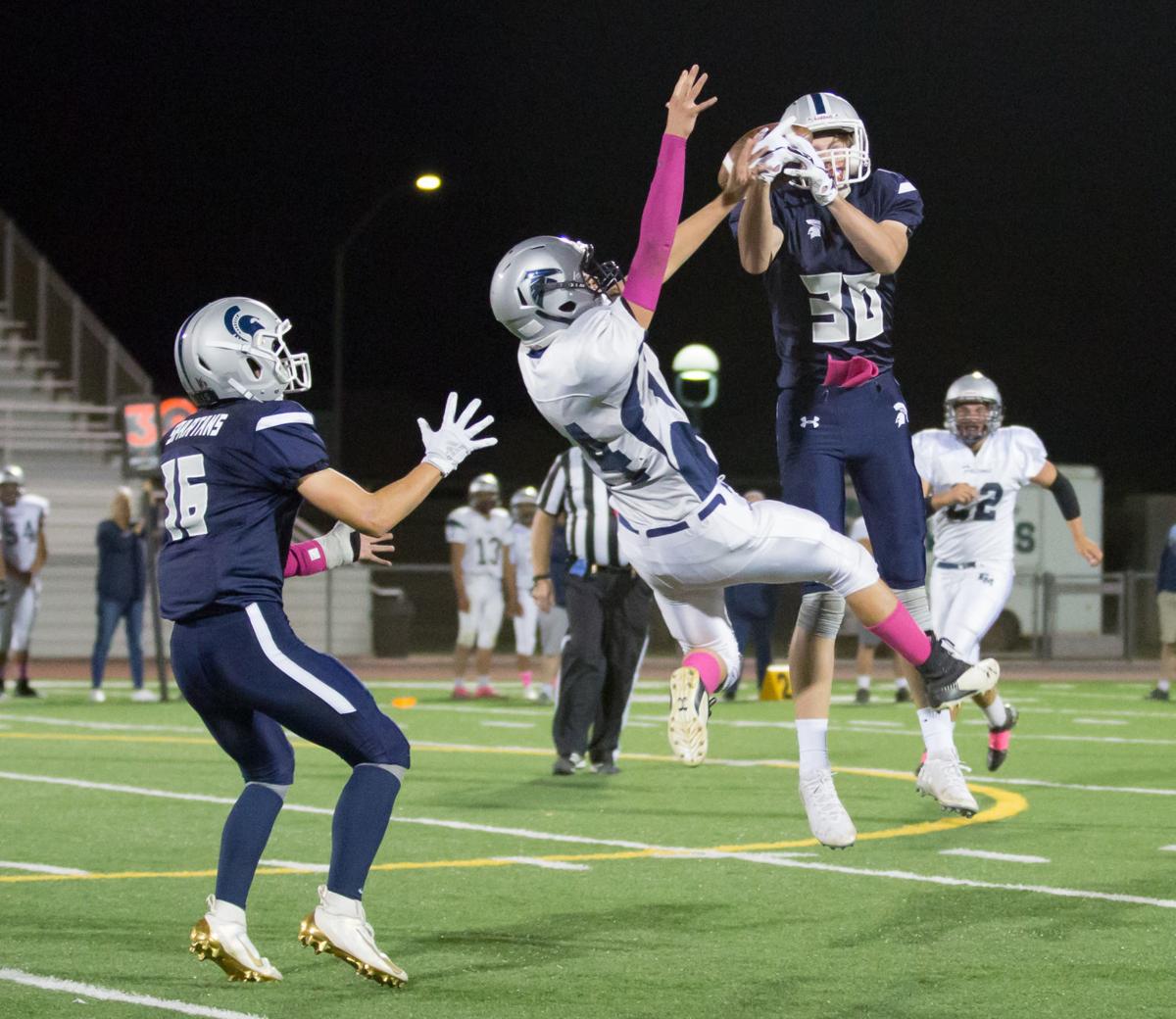 The Orcutt Academy Spartans kicked off their Homecoming weekend in style.

It was the Spartans’ (3-4) third straight victory, improving their league record to 2-0.

Donavan Miller starred on both sides of the ball, rushing for 132 yards and three touchdowns on just six carries.

Prep football: Week Seven scores from around the Central Coast

On defense, Miller had three of the Spartans’ five interceptions.

“But he didn’t get a pick six. He’s going to hear about that from me,” said Orcutt Academy head coach Gabe Espinoza. “But what a great game – three touchdowns and three interceptions. That’s got to be some kind of school record.”

“Orcutt Academy is a tough team. Due to several circumstances, we were only able to get in one hour of practice this week. It’s not an excuse but it did hurt us,” said Frazier Mountain head coach Roger Sumpter. “We should have adjusted sooner. We saw we could get our tight end open but we waited too long to take advantage of that.”

The Spartans defense was stifling, giving up a total of 145 yards – 37 rushing yards on 25 Falcons running plays and 108 yards through the air with 50 of those on a pass from Chris Burket-Thoene to Justin Blessly, setting up Frazier Mountain’s lone score late in the fourth quarter.

Orcutt Academy running back Alex Sutton gained 48 yards on four carries. After injuring his knee on a two yard run, Sutton played sparingly on offense although he did remain one of the defensive cornerstones.

Cooper Wood gained 40 yards and scored once on eight carries and quarterback Bryce Cofield picked up 28 on nine carries.

Cofield didn’t have to throw very often, completing two of nine for 62 yards, including a 28 yard touchdown to Cameron Carpenter.

The Spartans took the opening kickoff and marched down field. Sutton’s injury appeared to take the steam out of the drive which stalled at the Falcons’ 14.

After both teams failed on fourth down plays, Frazier Mountain was back on offense when Connor Adams picked up Orcutt Academy’s first interception, picking off Burket-Thorne at the Frazier Mountain 33.

Two plays later, Miller broke through the line, kicked it into a higher gear and ran through the defense on a 22 yard touchdown run for a 6-0 Spartans lead.

Four plays later, the ball was back in Miller’s hands, this time with his first interception.

A Miller 25 yard run got the Spartans out of trouble, setting the Spartans up for Cooper Wood’s 8 yard TD run.

Josiah DeBruno’s point after kick gave Orcutt Academy a 13-0 lead with 1:03 left in the first quarter.

Miller continued to be a thorn in the Falcons’ side, intercepting another Falcons pass on the first play of the second quarter.

And three plays later, Miller was gone again – this time on a 40 yard romp through the Falcons’ defense to give the Spartans a 19-0 lead.

Late in the half, Miller came down with his third interception.

This one led to Carpenter’s 328 yard touchdown catch with 8.4 second left in the half.

With DeBruno’s PAT, the Spartans were firmly in control, leading 26-0.

But Orcutt Academy’s half wasn’t done.

On the final play of the half, Carpenter got the team’s pick six, intercepting Burket-Thoene at mid-field and returning it for a 40 yard touchdown and a 33-0 halftime lead.

DeBruno kicked the point after for the final point of the half and then was named Homecoming King minutes later during a special halftime program.

Miller scored near the end of the third quarter to give the Spartans a 41-0 lead and Burket-Thoene scored for the Falcons late in the fourth quarter.

“The team is going in the right direction,” said Espinoza. “When Alex was injured it really hammered the message that we can’t rely on just one player and the team responded. Donavan really kicked his game up to a different level tonight. When he can get into high gear, he’s hard to race down.”

Orcutt Academy is on the road next week against the other 2-0 Sierra League team, Riverdale Christian.

It marks the second straight win for the Knights after a three-game skid.

Darien Langley scored on a 20-yard touchdown pass from Hunter Barnhart for the go-ahead score. Devin Guggia then tacked on a 25-yard touchdown run for some insurance.

Langley also had a 92-yard touchdown return and an interception and Patrick Heard had a touchdown reception from Barnhart.

Quarterback Tyler McCoy threw for 275 yards and running back Matt Holihan rushed for 118 yards in the loss.

Hannah Montalban, with an assist from Elizabeth Aldana, tallied in the 54th minute for Hancock.

Growing up in their native Bolivia, brothers Andres and Sebastian Taborga had not so much as seen an American football game on television. 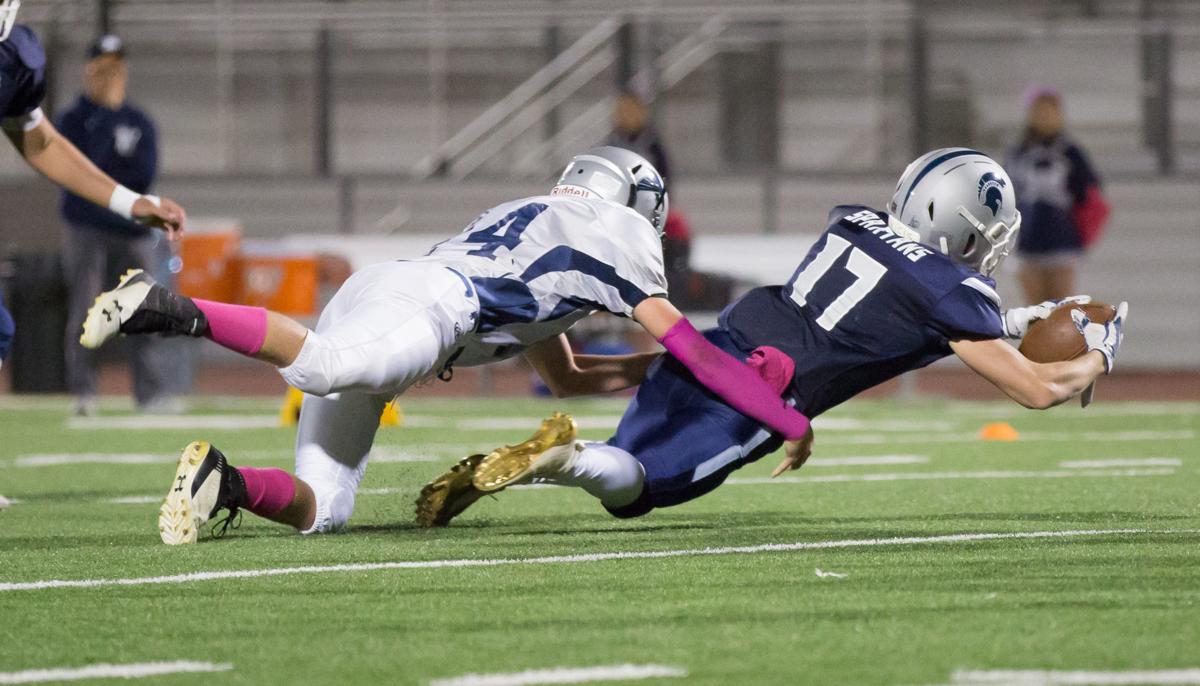