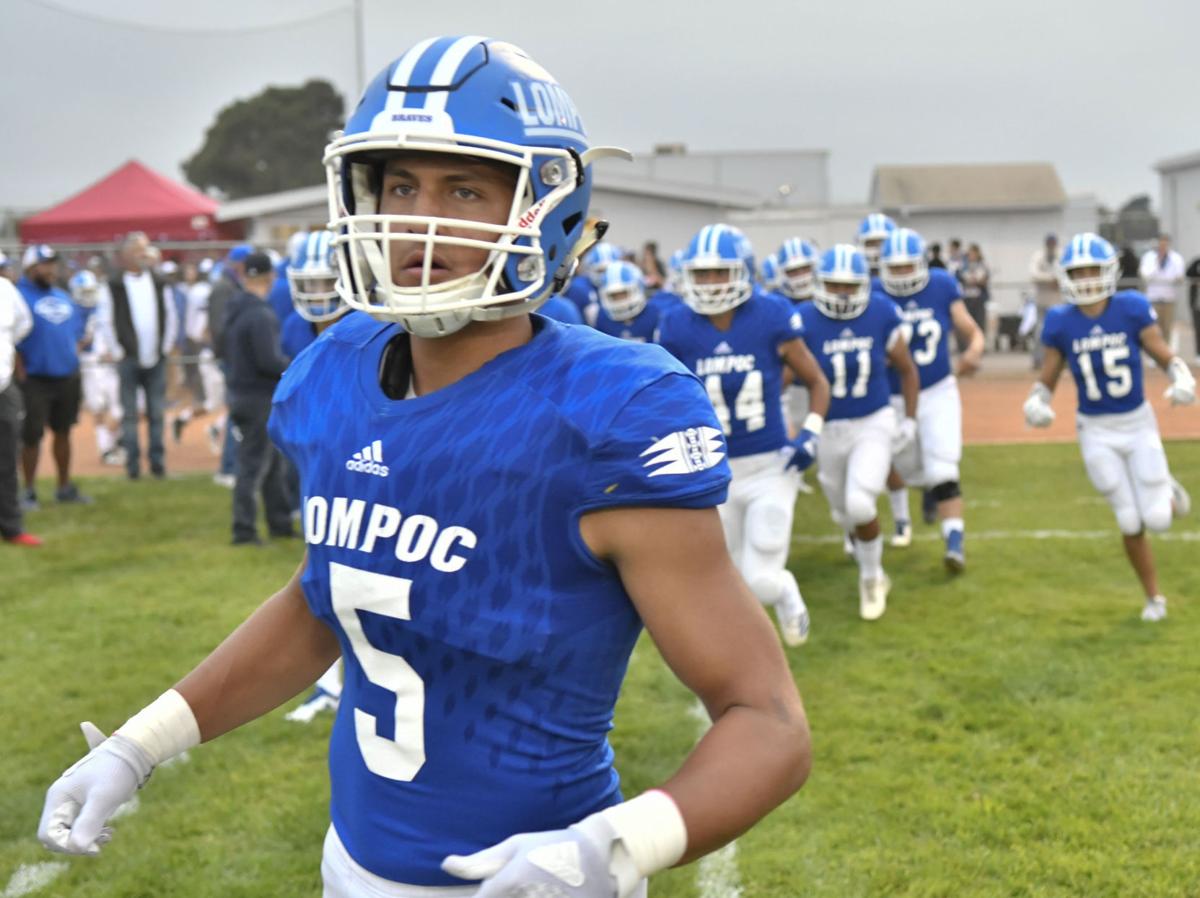 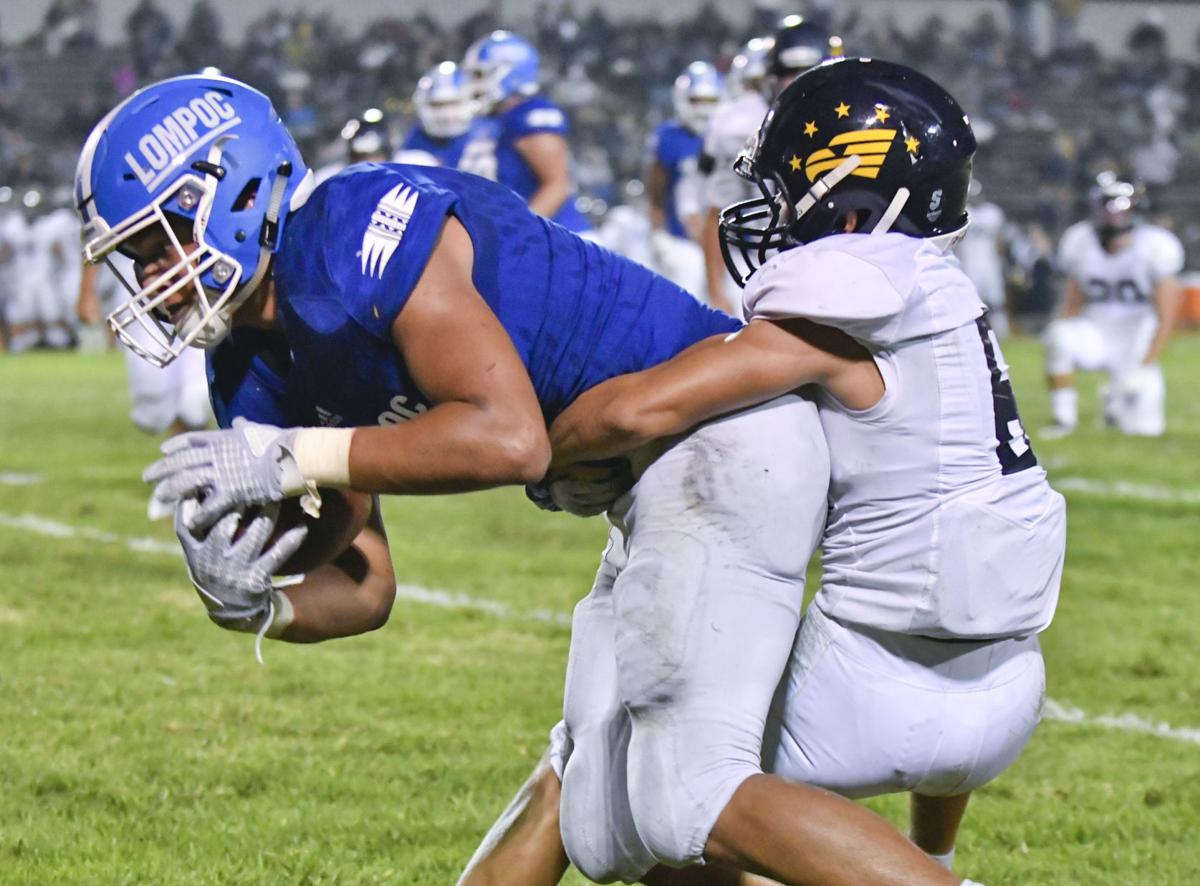 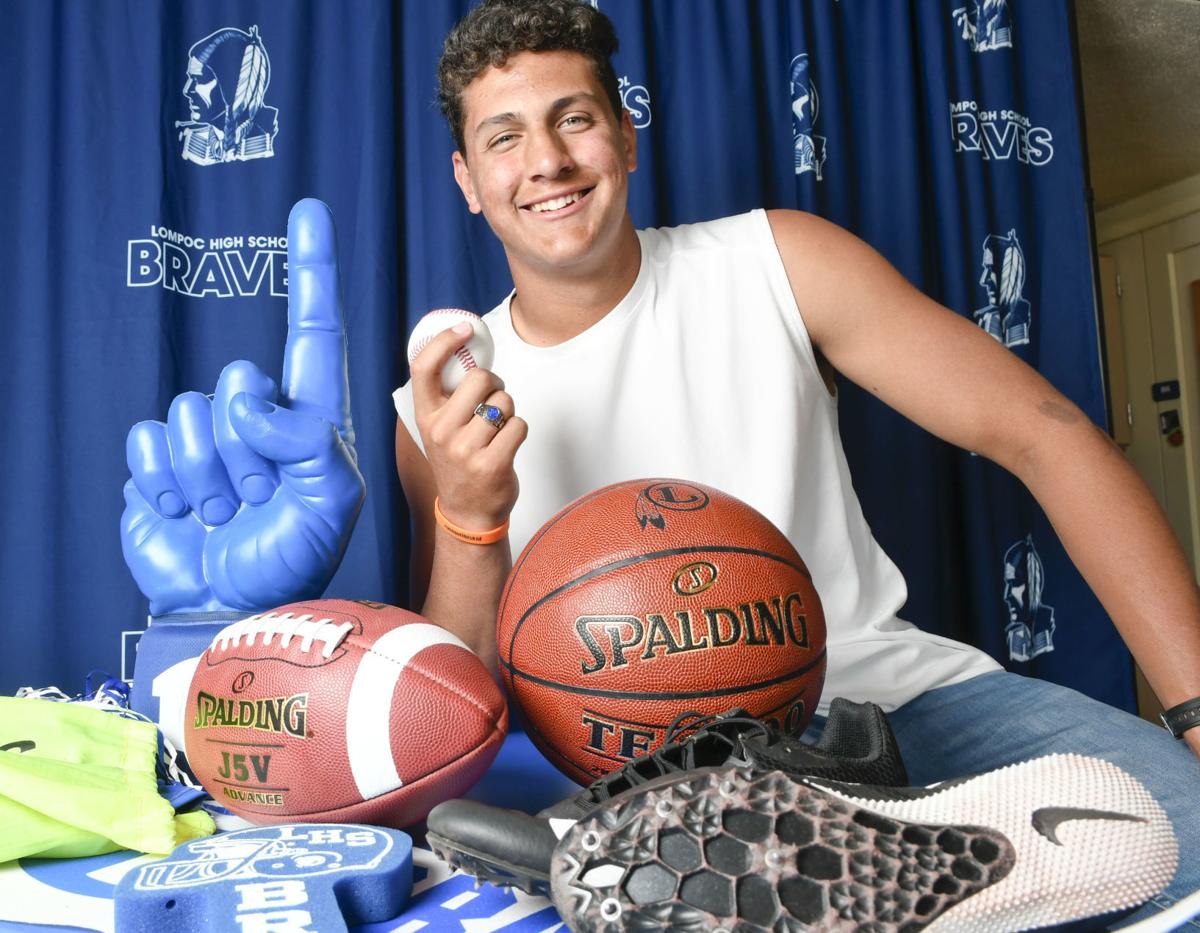 Lompoc High School junior Ryan Morgan is a rare 4-sport athlete who, for the third year in a row, is trying to juggle baseball and track and field, after finishing football and basketball seasons. Morgan now tells The Times that he's been offered football scholarships from Wyoming and UNLV of the Mountain West Conference.

Ryan Morgan went from being offer-less, to wondering if his broken collarbone from last season would hold him back, to now landing two scholarships in fewer than 24 hours.

After much anxiety following the completion of three seasons on varsity, the Lompoc Brave wide receiver and defensive back says that Wyoming and UNLV of the Mountain West Conference have offered him scholarships – arriving to him on Sunday and Monday, respectively.

“It’s been a wild couple of days,” Morgan said by phone on Monday afternoon.

His Wyoming offer arrived on the USC campus – as the 6-foot-3, 210-pounder took part in the Trojans’ 2019 Rising Stars camp.

Morgan described how he impressed the Cowboy coaches with his route running during a competitive seven-on-seven drill against the other camp attendees hailing from Southern California. Morgan caught the attention of head coach Craig Bohl and tight ends/fullbacks coach Shannon Moore, he says.

“It was more toward the end of the 7-on-7s. I just ran a route and ended up talking with the head coach and tight ends coach,” Morgan said. “Then I spoke with coach Bohl – and he said they were going to offer me.”

Morgan described it as a frozen-in-time moment for him, saying the Cowboys’ offer left him speechless.

His Rebels offer arrived during practice on Monday, as his mother – LHS athletic director Claudia Terrones – got him to take a quick break during reps.

“I was in the middle of practice. My mom pulled me aside and said ‘You have to talk to UNLV.’ They told me they were going to offer me,” Morgan said.

Now comes the next part: Planning potential trips to Laramie and Las Vegas. Morgan says his unofficial visit to UNLV could be sometime before June ends, while the Wyoming trip may arrive later in July.

The four-sport athlete Morgan – who has a collection of All-Los Padres League, All-Area and All-Channel League accolades in football, basketball, baseball and track and field – calls this moment a sigh of relief, plus the realization that college football programs are indeed interested in placing the Brave in their 2020 recruiting classes.

“Honestly, I’ve waited for this moment since youth football,” Morgan said. “I wasn’t sure (if I would get offers right away) because of my broken collarbone injury. These offers fill me with so much joy.”

Zo's Gold Mines: These Santa Barbara County football prospects are who to look at during the NCAA Spring Evaluation Period

I’m using this column to assist college coaches and area high school programs with an important April event going on across America.

Heading to the land Down Under: Lompoc High grad Julie Shepherd to take part in Australia meet

On the 805 recruiting trail: Lompoc's Cameron Iribarren aims to be next Brave, and from his family, to play college ball

“My brother Willie told me to excel in school, find every opportunity, seize the moment, believe in yourself and be confident with your decisions,” Iribarren said. Now, the southpaw quarterback is hoping to be the next from the Iribarren household to find a future college home, plus become the next Braves’ signal-caller to compete collegiately – joining a lineage that includes Xavier Nix, Boo Jackson plus Iribarren’s head coach Andrew Jones.

On the 805 recruiting trail: Lompoc's Ryan Morgan commits to Wyoming

Ryan Morgan will go from Lompoc to Laramie soon.

Lompoc High's Ryan Morgan came to an unexpected fork in the road and found himself facing a decision he never thought he'd have to make. Before his senior season began, the athletic tight end landed two offers: From UNLV and Wyoming.

Lompoc High School junior Ryan Morgan is a rare 4-sport athlete who, for the third year in a row, is trying to juggle baseball and track and field, after finishing football and basketball seasons. Morgan now tells The Times that he's been offered football scholarships from Wyoming and UNLV of the Mountain West Conference.