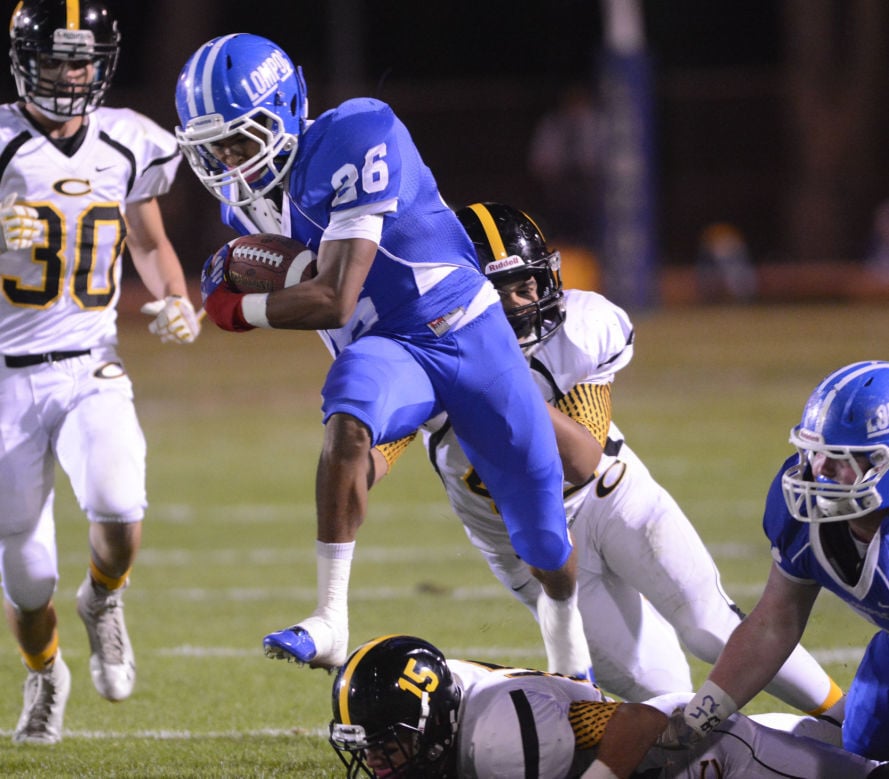 Lompoc running back Derrick Portis, seen in this Nov. 7, 2014 photo, went on to play college football at Upper Iowa and Ferris State. Portis had 2,600 rushing yards and 35 touchdowns in two varsity seasons at Lompoc. 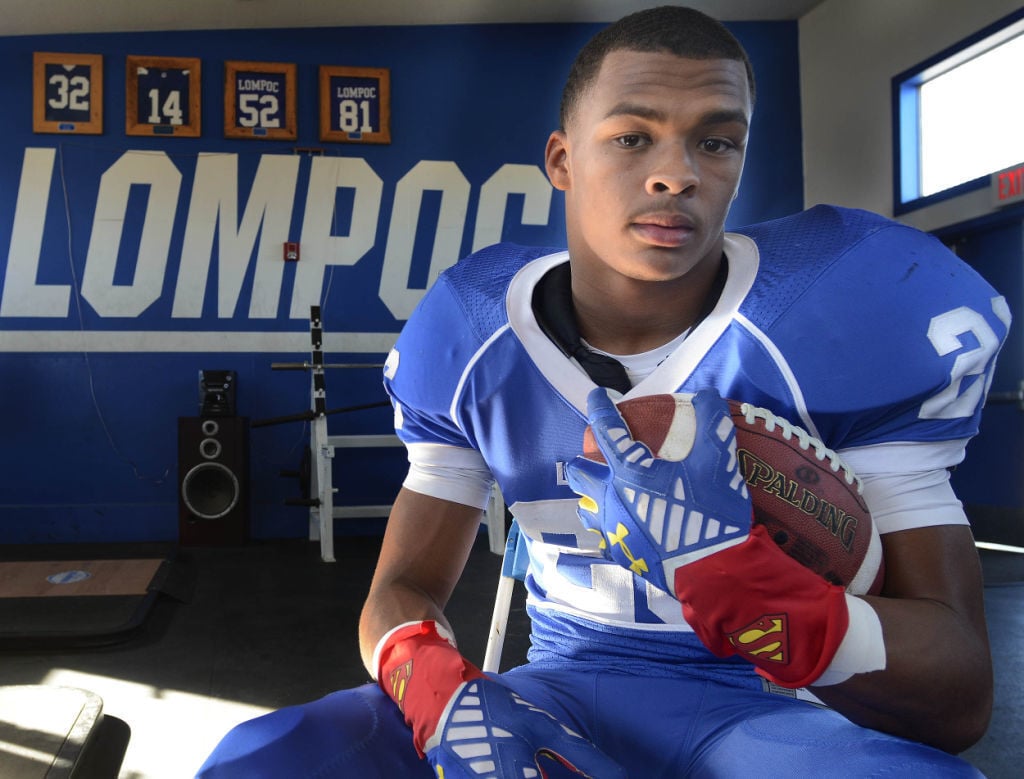 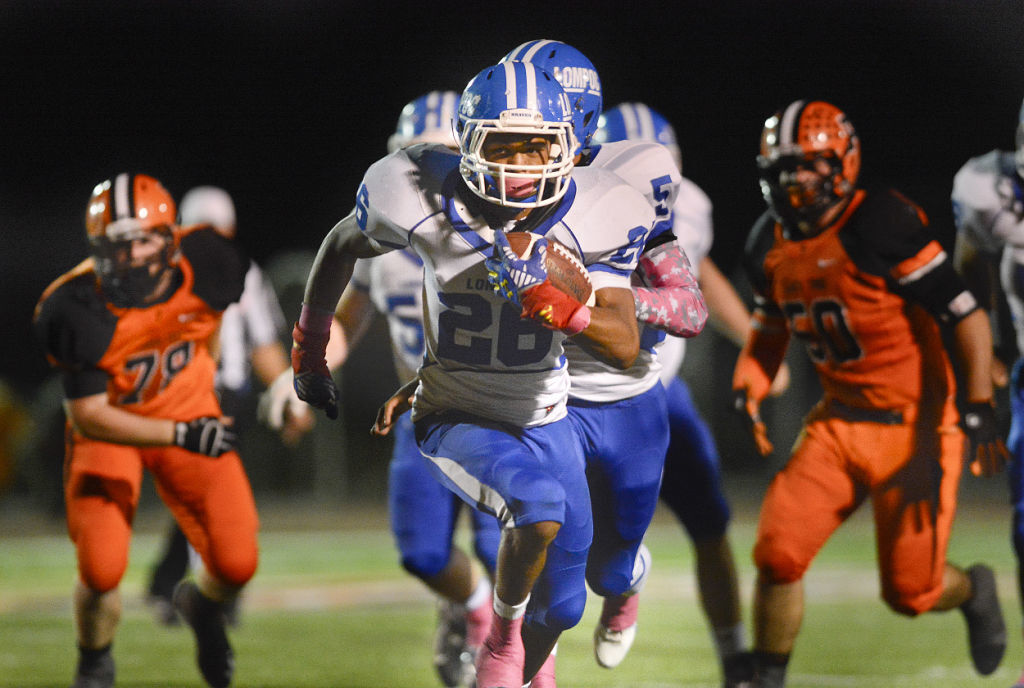 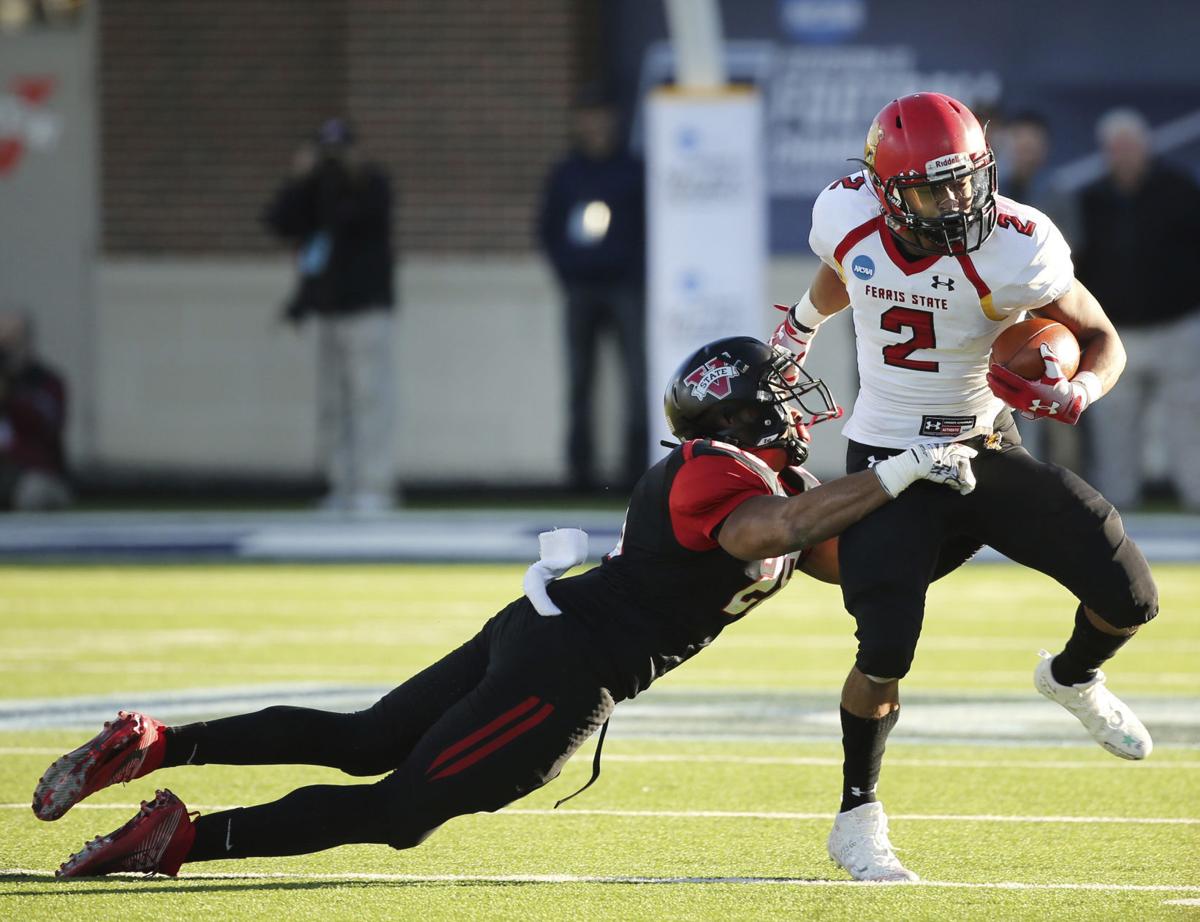 Lompoc High grad and Ferris State running back Derrick Portis (2) runs the ball against Valdosta State defensive back Raymond Palmer (28) during the first half of the NCAA Division II championship in McKinney, Texas, Dec. 15, 2018.

I've mentioned time and again how many talented athletes come out of the Lompoc Valley and how easy it is for a great one to get overlooked.

Portis was always one of my favorite players. Not just for his on-field exploits either. He was a great kid in my interactions with him and one who overcame a tough upbringing before he hit high school football stardom.

Portis came out of nowhere during Lompoc High's 2013 season.

No one was quite sure who would take over the reins of Lompoc High's vaunted rushing attack after the graduations of lead backs Marcel Blow, Nikko Hayes and Lavon Coleman in the years prior.

But Portis didn't hesitate to take over.

As an unheralded junior in 2013, Portis had a highlight reel season. He started his varsity career against Arroyo Grande, rushing for 151 yards and a score on 23 carries in a 28-16 win. Portis would rush for at least 100 yards in the first five games of the year. He had 145 against Bakersfield Frontier, 104 vs. Pioneer Valley, 196 against Dos Pueblos and 107 against Morro Bay. His 100-yard streak ended, though he did have four carries for 72 yards and two scores in a 49-0 romp over Templeton in the sixth game of the year.

Portis likely would've topped 100 yards in the first 10 games of the year, but he was just needed for two carries in a 51-7 win over Santa Maria. (He did get 44 yards and a score on those two totes).

Portis was needed more in a 64-3 win over Santa Ynez, carrying the ball 10 times for 122 yards. In the next week, in an 80-28 win over Nipomo, Portis had 11 carries for 247 yards and three touchdowns. In the regular season finale vs. Cabrillo, Portis had eight carries for 104 yards and two scores in the Big Game win over the Conquistadores.

Lompoc started the 2013 playoffs with a 38-7 win over Los Angeles Cathedral where Portis had 10 carries for 33 yards. In the 42-10 win over Santa Monica in the quarterfinals, Portis carries the ball 12 times for 131 yards and a touchdown. The Braves were knocked out of the Western Division playoffs in the semifinals after a 49-14 loss at West Hills Chaminade. Portis had 76 yards on 19 carries in that game.

In his junior season, Portis finished with 161 carries for 1,532 yards and 21 touchdowns. He averaged 9.52 yards per carry. Portis also played some strong defense for the Braves as Lompoc finished 11-2.

Portis was just about as good during his senior year, though he didn't carry the ball quite as much. Portis had 136 carries for 1,054 yards and 14 touchdowns in 2014. He also had three touchdown catches that year and made 55 tackles with three sacks and an interception on defense.

Portis' numbers are great, but what made him one of my favorite players was his ability to always make the right play at the right time. Portis had a penchant for breaking off big touchdown runs in a big spot or blocking a punt or making a special teams play. Portis played with this quiet intensity and really matched his athletic ability with an intelligent style to his game.

"He leads by example," Lompoc coach Andrew Jones once told the late sports writer Brad Memberto. "He's a hard worker, has a refuse-to-lose mentality and is someone we will really miss, because he was so valuable on each side of the ball."

A pandemic hasn't been able to knock the Y off its path.

Portis went on to play at Upper Iowa, before transferring to Ferris State, a Division II program. Portis nearly won an NCAA Division II title with the Bulldogs in 2018 as Ferris State lost to Valdosta State in the championship game. Portis had 87 carries for 532 yards and four scores in his final season at Ferris State.

Portis' career at Lompoc is being highlighted as part of our "The Other Guys" series, which aims to feature standout football players who may have been overlooked during their careers. Submissions for athletes to be feature as part of the series can be sent to the author.

Lompoc running back Derrick Portis, seen in this Nov. 7, 2014 photo, went on to play college football at Upper Iowa and Ferris State. Portis had 2,600 rushing yards and 35 touchdowns in two varsity seasons at Lompoc.

Lompoc High grad and Ferris State running back Derrick Portis (2) runs the ball against Valdosta State defensive back Raymond Palmer (28) during the first half of the NCAA Division II championship in McKinney, Texas, Dec. 15, 2018.