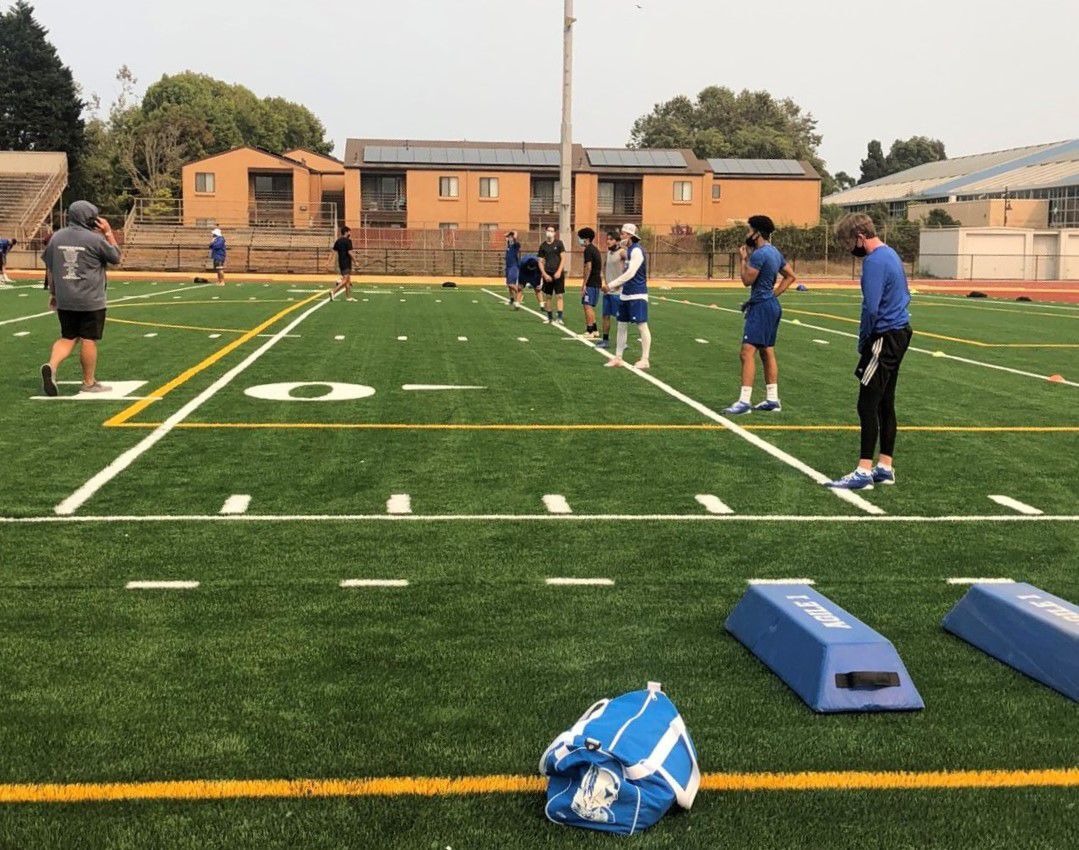 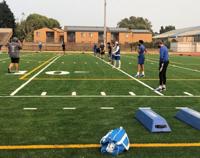 Members of the Lompoc High football team work out on the new Huyck Stadium turf in September. After announcing school workouts would be halted on Wednesday, Lompoc Unified School District announced Thursday that it would resume those workouts. 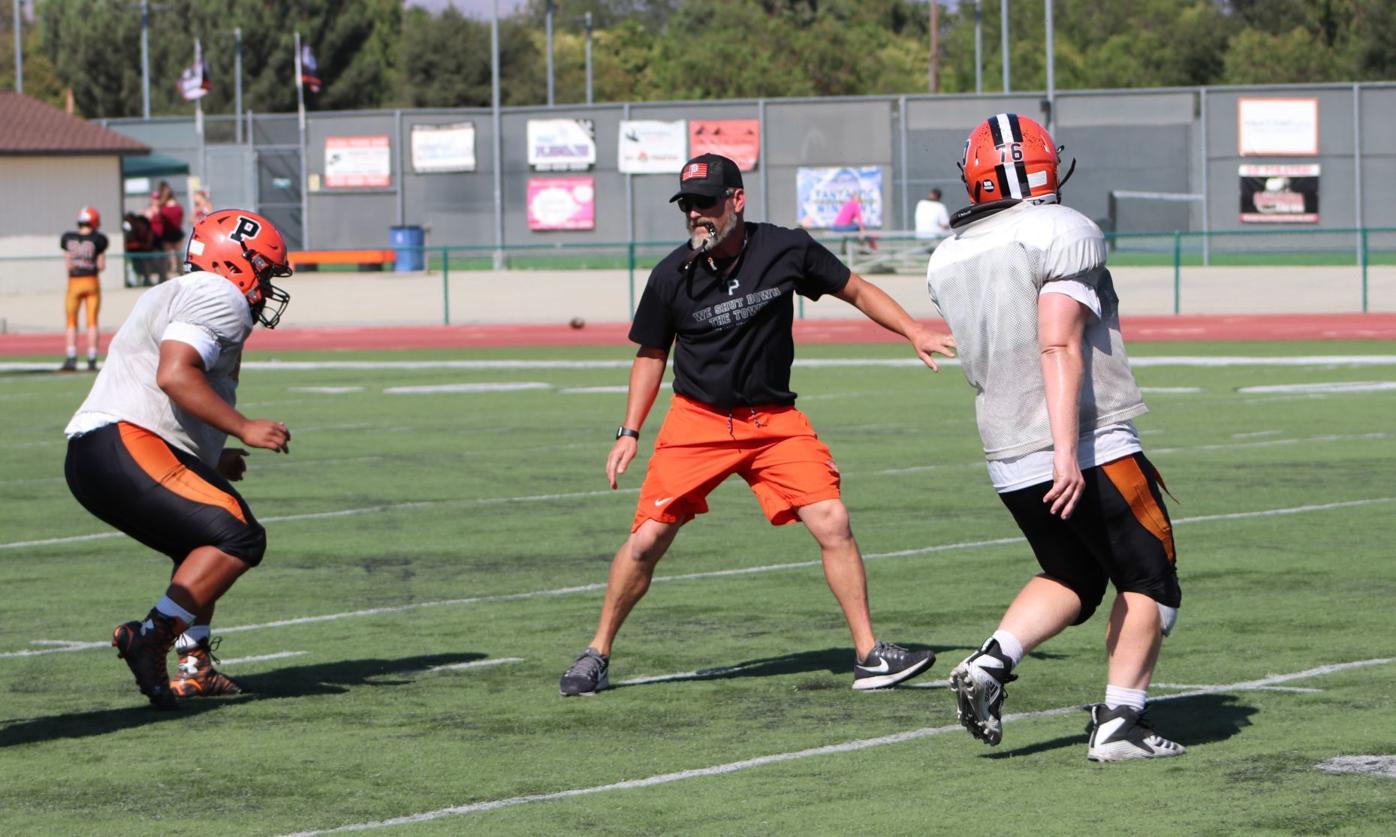 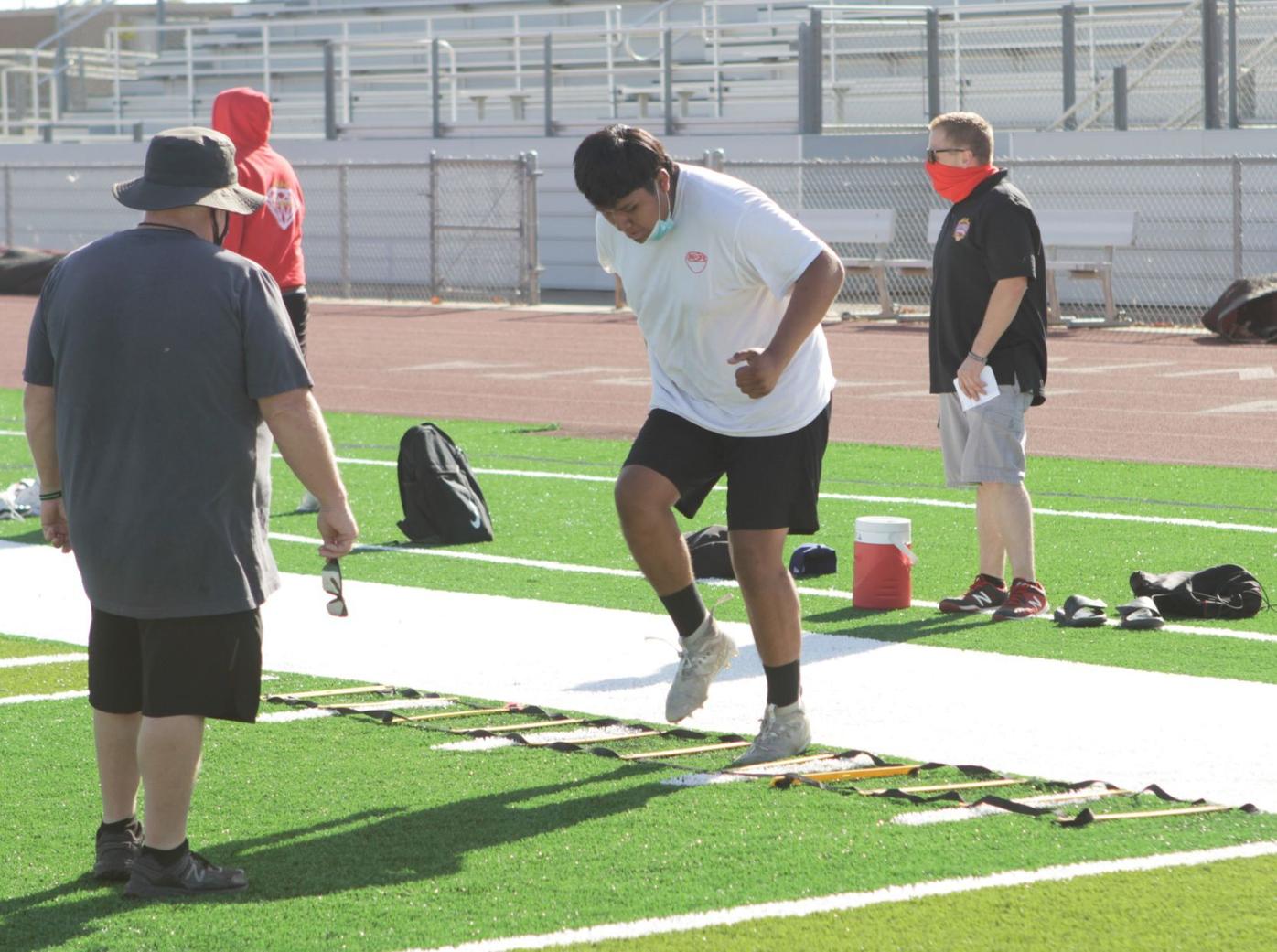 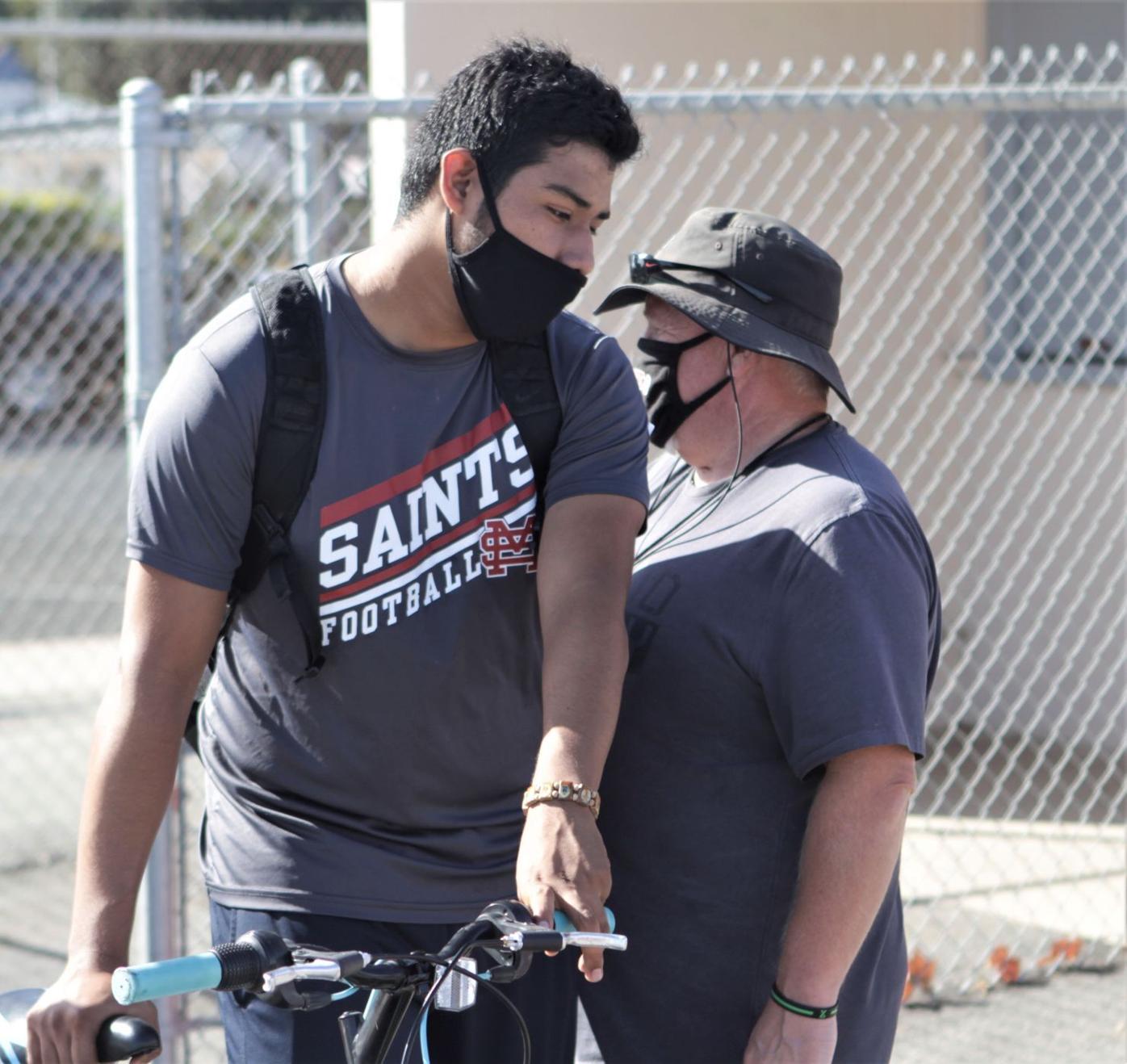 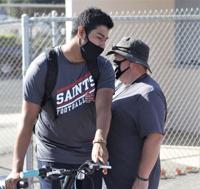 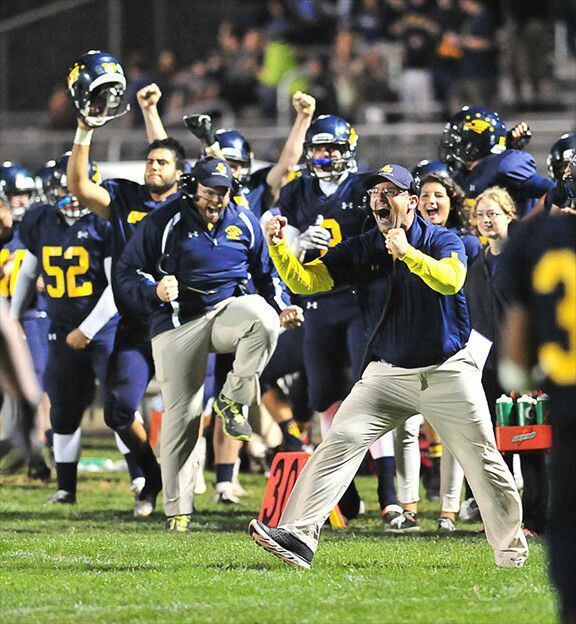 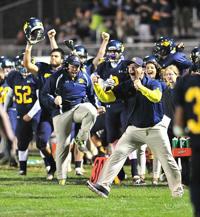 Arroyo Grande head coach Mike Hartman is hopeful a full football season will happen in 2021, but understands there's some frustration in coaching circles derived from a lack of communication from the state's decision-makers. 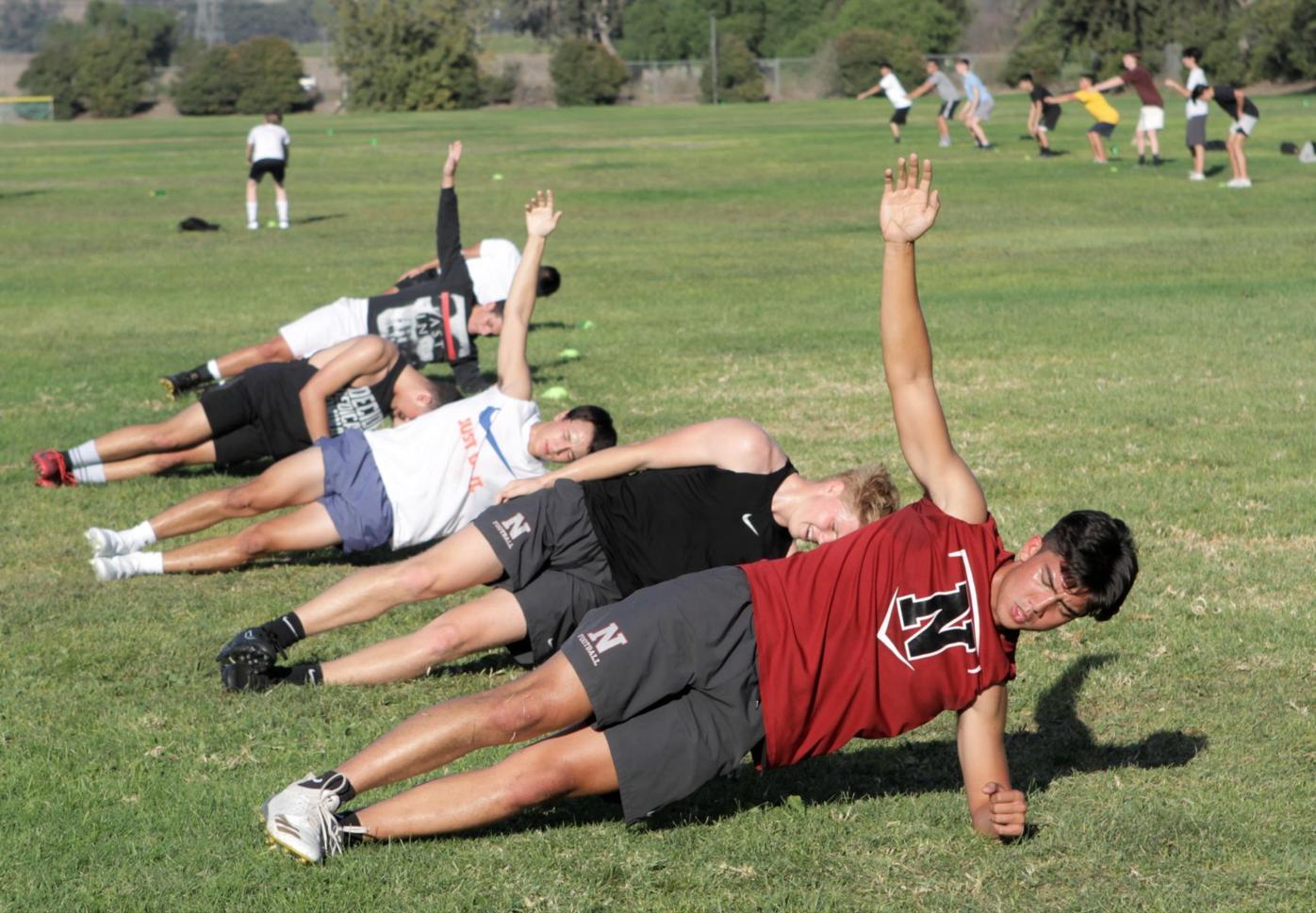 Justin McKee, front, leads Nipomo football players in a planking drill during a conditioning session this week on campus in October. McKee and his teammates returned to campus on Oct. 5. The players cannot begin full practices as scheduled on Dec. 7 without further guidance from the state. 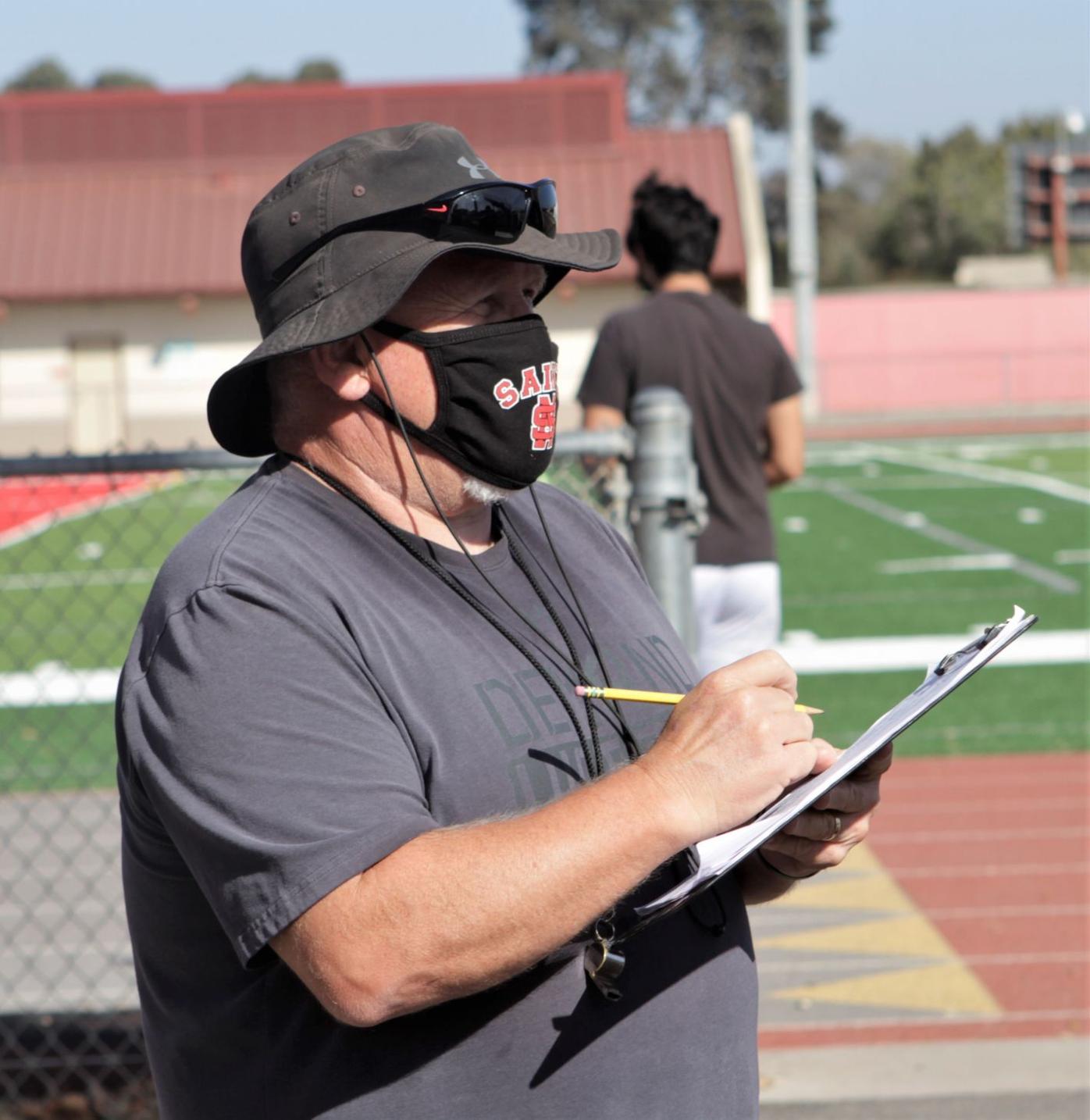 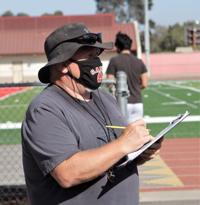 Members of the Lompoc High football team work out on the new Huyck Stadium turf in September. After announcing school workouts would be halted on Wednesday, Lompoc Unified School District announced Thursday that it would resume those workouts.

Arroyo Grande head coach Mike Hartman is hopeful a full football season will happen in 2021, but understands there's some frustration in coaching circles derived from a lack of communication from the state's decision-makers.

Justin McKee, front, leads Nipomo football players in a planking drill during a conditioning session this week on campus in October. McKee and his teammates returned to campus on Oct. 5. The players cannot begin full practices as scheduled on Dec. 7 without further guidance from the state.

In less than two weeks, the calendar will read Dec. 7. That date is an important one on the area sports calendar.

For high school athletic programs in the California Interscholastic Federation (CIF) Central Section, that's the date that football teams are scheduled to start full practices for a season set to start the first week of January.

For CIF Southern Section programs, such as Valley Christian, Lompoc, Cabrillo and Santa Ynez, the date is Monday, Dec. 14 to prepare for a season that starts Jan. 8.

What are area football coaches feeling with those dates fast approaching? Mainly frustration, brought on by uncertainty.

You see, although the CIF sections set the dates for a sports season amid the coronavirus pandemic, schools cannot begin practicing and preparing for a January season without more guidance.

Where does that guidance come from? The state, particularly Dr. Mark Ghaly, Secretary for California's Health and Human Services Agency.

During a Nov. 10 meeting on the coronavirus pandemic, Ghaly said that his department was "working closely with CIF and other youth sports leaders to ensure that we are aligned in the guidance. It will provide clarity as to when competition can take place.”

Ghaly said on Nov. 16 that the announcement of those guidelines has been postponed. During another conference on Nov. 24, Ghaly did not bring provide any updates on the high school/youth sports guidelines.

Just weeks away from those important dates, most area athletic leaders are in the dark about what will happen with high school and youth sports amid the pandemic. A football season could be pushed back or shortened, or, perhaps, be outright canceled.

"Our best bet would be to postpone it and cut our games down, so at least the kids can have a some kind of season."

No major high school or youth sports competitions have happened in the area since March.

A winter surge in cases

Last week, Santa Barbara and San Luis Obispo counties joined 39 others by dropping into the purple or "widespread" tier in Gov. Gavin Newsom's reopening plan. That news and a month-long limited stay-at-home order didn't stop the conditioning programs most high schools are in the midst of, but did halt most indoor training.

As of Tuesday, a total of 45 counties were in the state's purple tier.

In a Nov. 16 briefing, Ghaly announced the release of updated athletics guidelines has been delayed, forcing the CIF state office to announce that "the current guidance remains in effect, and CIF competitions are not allowed until new guidance is provided."

It appears the state is taking a wait-and-see approach to resuming high school sports, which is understandable. California's 14-day COVID-19 positivity rate is at 5.4%, a 2% increase from the prior period. There are over 5,700 patients hospitalized with the virus in the state. Ninety-four percent of California's population is in the purple tier. As of Saturday, there were 18,643 deaths from COVID-19 in the state.

Longtime Santa Ynez coach Josh McClurg is particularly frustrated by seeing football programs at California universities practice and play games while high schools are unsure of what will happen to their seasons.

Cal Poly's football team has run a full fall camp to prepare for a season starting in February. Fresno State, UCLA, Cal, San Diego State and other public universities in the state have started full-fledged football seasons. Other states in the nation have played full high school football seasons.

California universities are scheduled to start basketball seasons this month.

"The solution is to look at the 38 other states that are playing high school football and take what they've done," McClurg said. "Our universities are practicing and playing football. It was great to see Cal Poly get their guys out there and start practicing two or three weeks ago. If the NCAA schools are allowed to practice, I don't see the difference in high schools getting the same opportunity."

McClurg knows first-hand what high school kids have gone through these last seven to eight months and what losing a season would do to them. He has twin 17-year-old sons, Canyon and Cash, who are on the Santa Ynez football team.

Losing a season would be disastrous, he said.

"It would be devastating to the kids. It's something we don't talk about with the players," McClurg said. "I don't even entertain it. We preach taking it day-by-day. I've never been a guy to look ahead. If it's week one, we don't talk about who we're playing in week five. That's the same approach here. Just focus on what we can control."

Mike Hartman, Arroyo Grande High's head football coach, has taken a similar approach within his program, telling his players to pour their energy into productive endeavors. But he noted that he wished there were some line of communication with the state's decision-makers.

"One of the biggest sources of frustration is the lack of communication and guidance form the state," Hartman said. "The state issued guidance on youth sports back in the summer and they've gone incommunicado since. In the absence of communication with the state, imaginations are starting to run wild. It's not a good thing for our kids. I can see that being a source of frustration. For me, a monthly check-in to keep us updated on what's happening and to let us know they're still paying attention to us would be great."

What will happen next?

There's still some hope the current athletic calendar stays in place. Ellington feels his players would need the full month of acclimation and practices to be ready for a season in January. McClurg said "I think we could do two weeks."

Ellington said keeping his 75 or so students attached to the football program is better than the alternative.

"Does (canceling the season) stop the kids from hanging out outside of practice?" he said. "Instead of canceling, can we all try harder to put in place testing and safety protocols that would allow them to compete?

"My biggest concern is we are out here building a team and the kids are as motivated as ever to play," Ellington added. "If they cancel their season, that would be hard on them, especially after all they have gone through this school year."

McClurg thinks the state has updated guidelines prepared but is waiting to release them.

"They have new guidelines and it would be nice to see them and give us some hard dates to work with," McClurg said. "But instead, right now, we're just in limbo."

At Arroyo Grande, Hartman isn't sure what the future holds, though he's not wasting much energy on worrying about it.

"That's above my pay grade," Hartman said when asked what he thinks will happen. "That's part of the frustration coaches are feeling now. This is not up to them and you can feel powerless. As a head coach, you're pretty much the person that makes all these decisions and now you don't get to make those decisions."