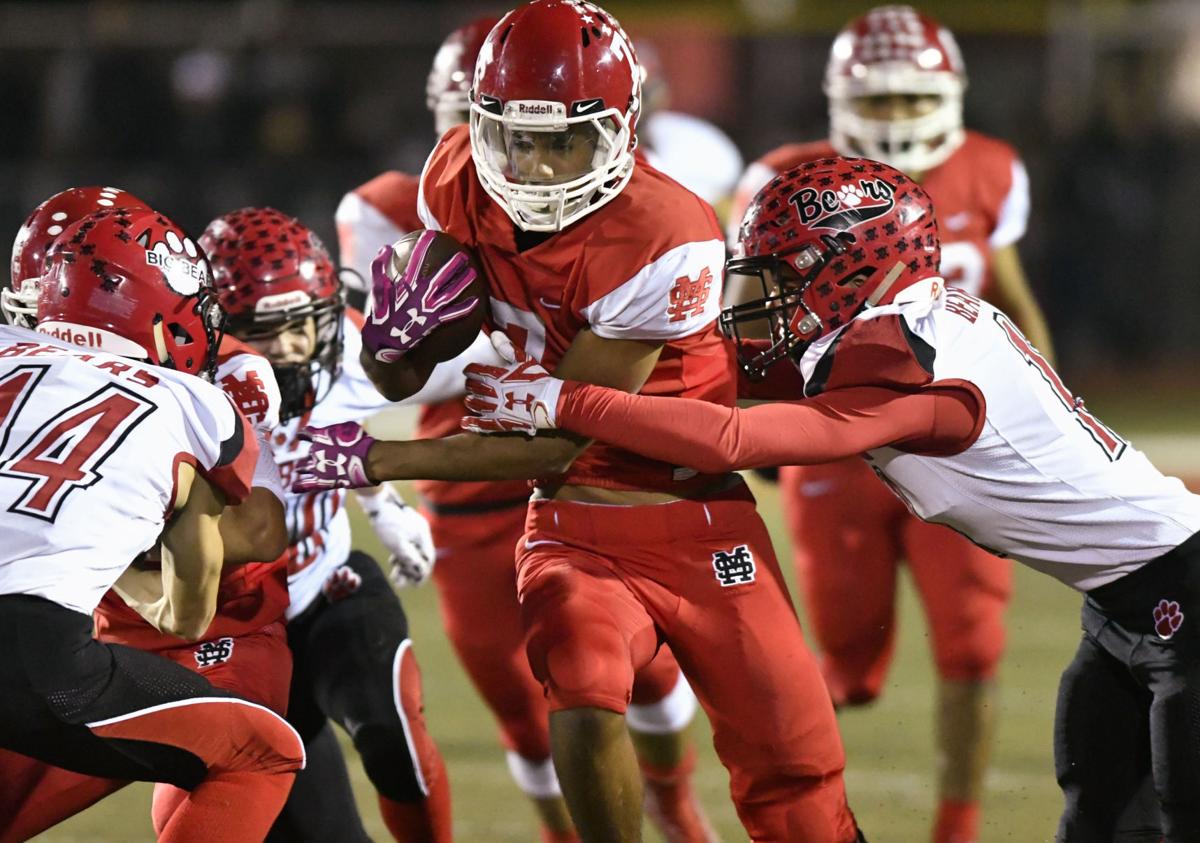 Santa Maria's Jonathan Ramos runs after catching a pass against Big Bear during the CIF-SS Division 12 championship game in 2017. 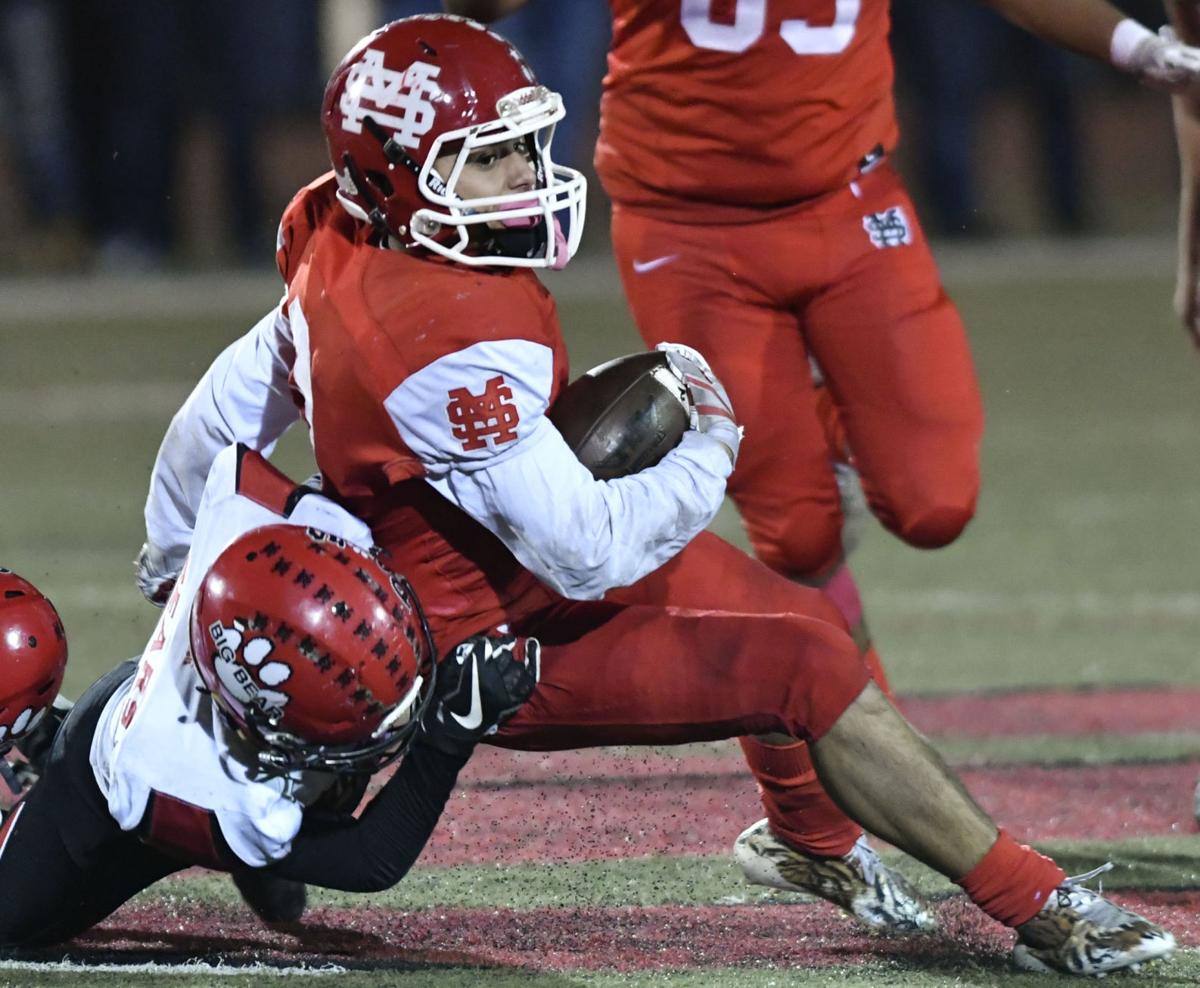 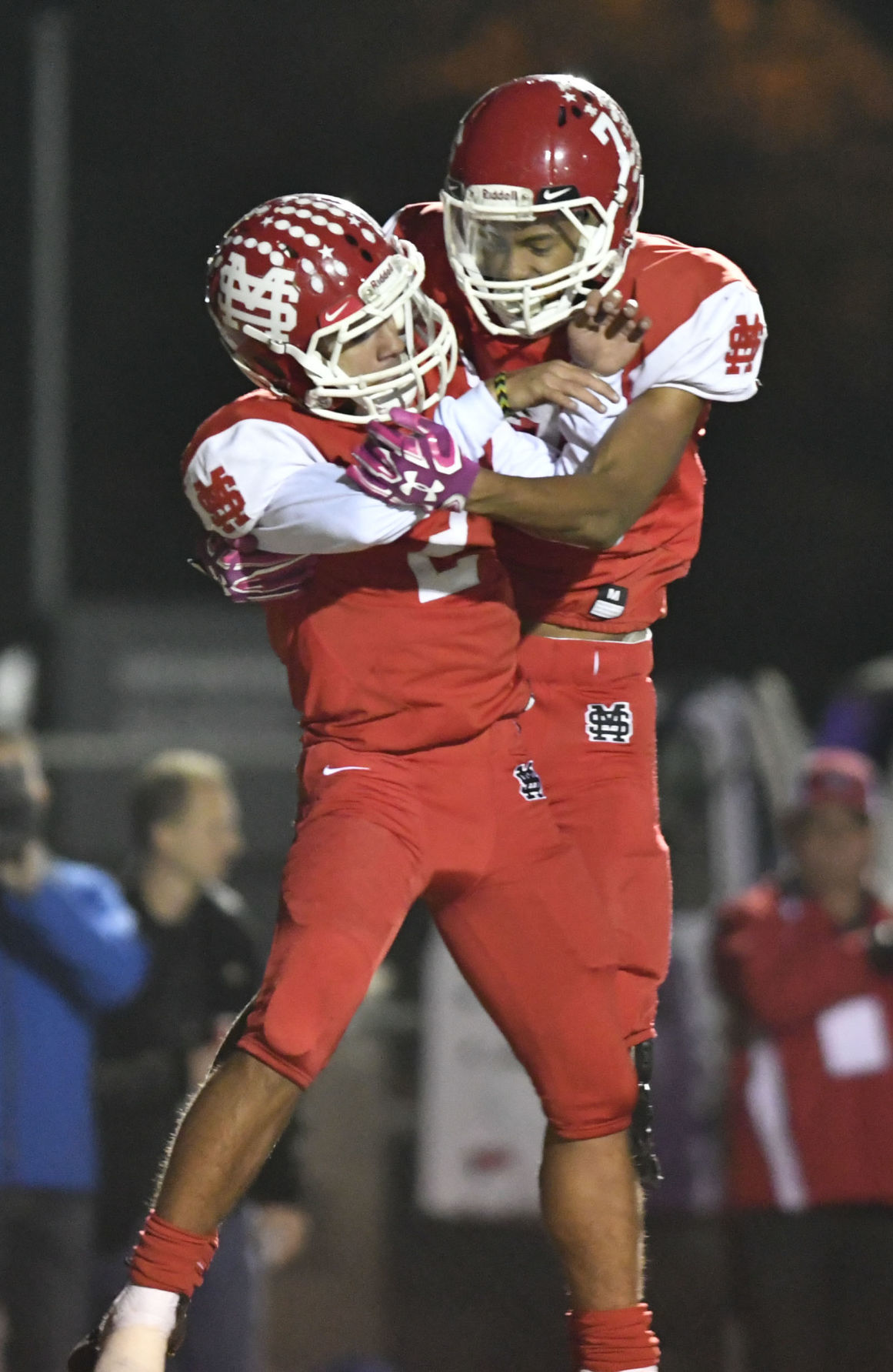 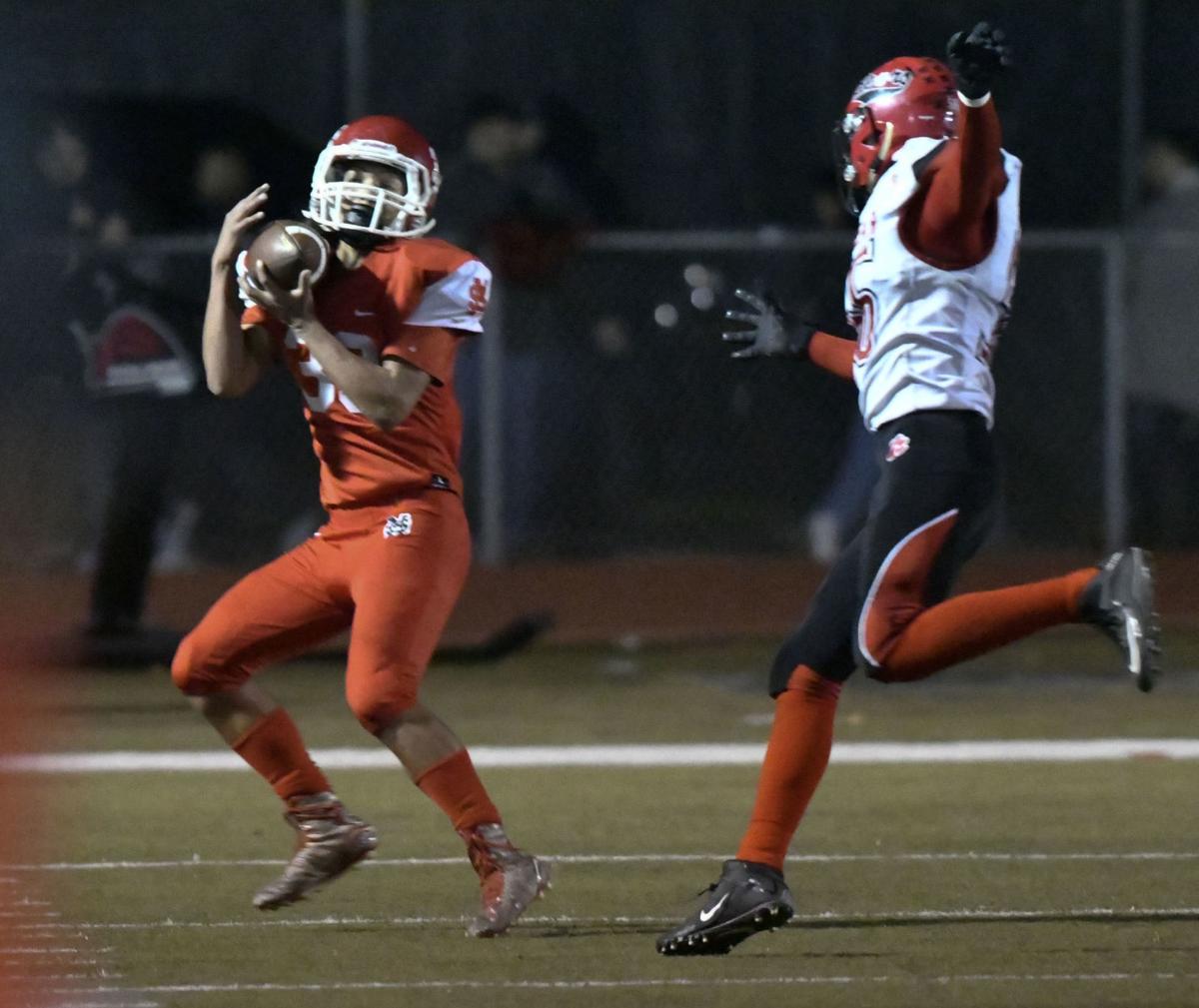 Santa Maria's Phillip Becerra makes a long catch to set up the Saints' final touchdown during the 2017 CIF title game against Big Bear. 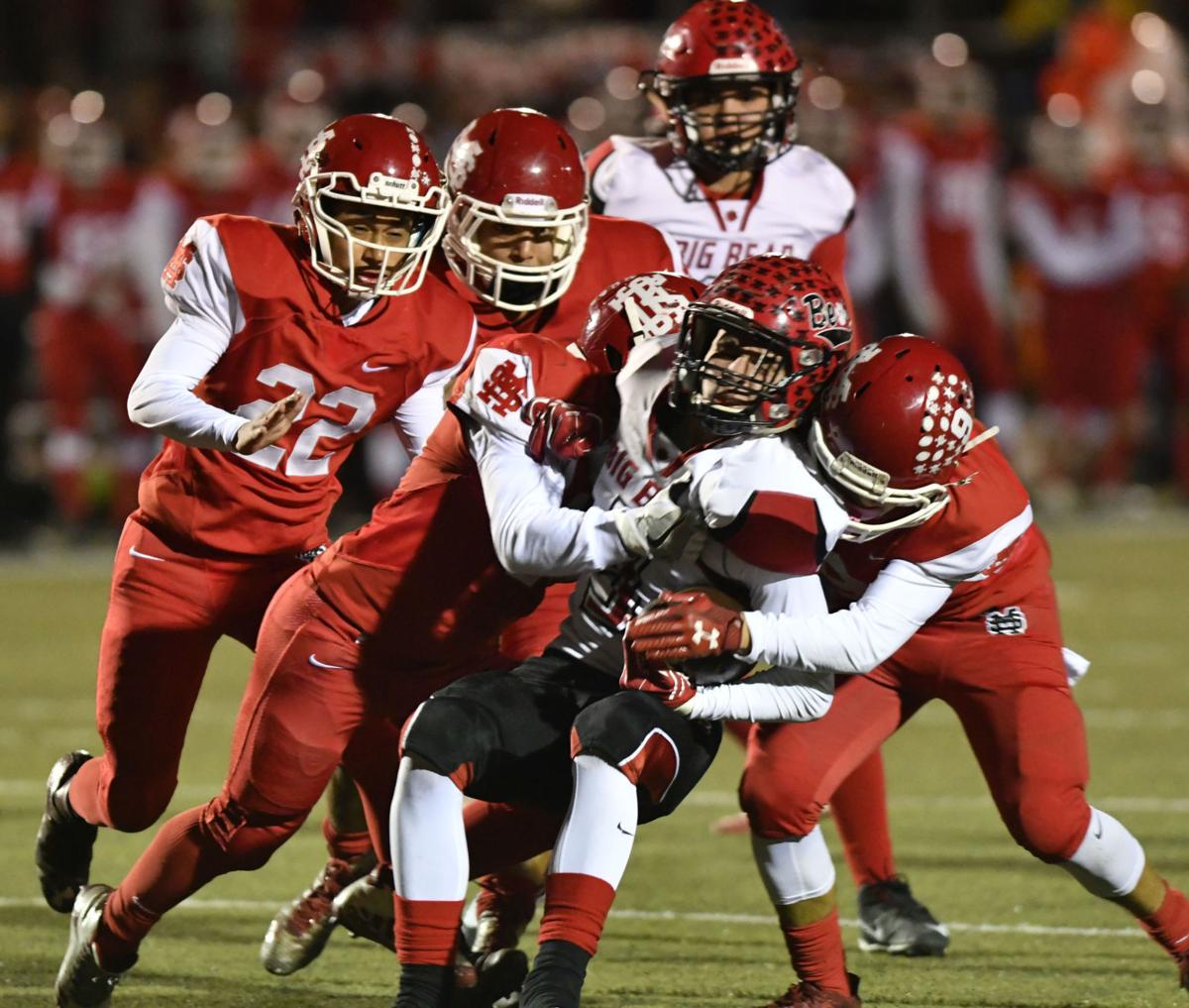 Santa Maria defenders stop Big Bear's Isaiah Manos for a loss during a CIF-SS playoff game on Dec. 2, 2017. Players getting injured with concussions is a growing concern. On Saturday, Dignity Health Centers is hosting a symposium at Arroyo Grande High School to educate athletes and others about the problem. 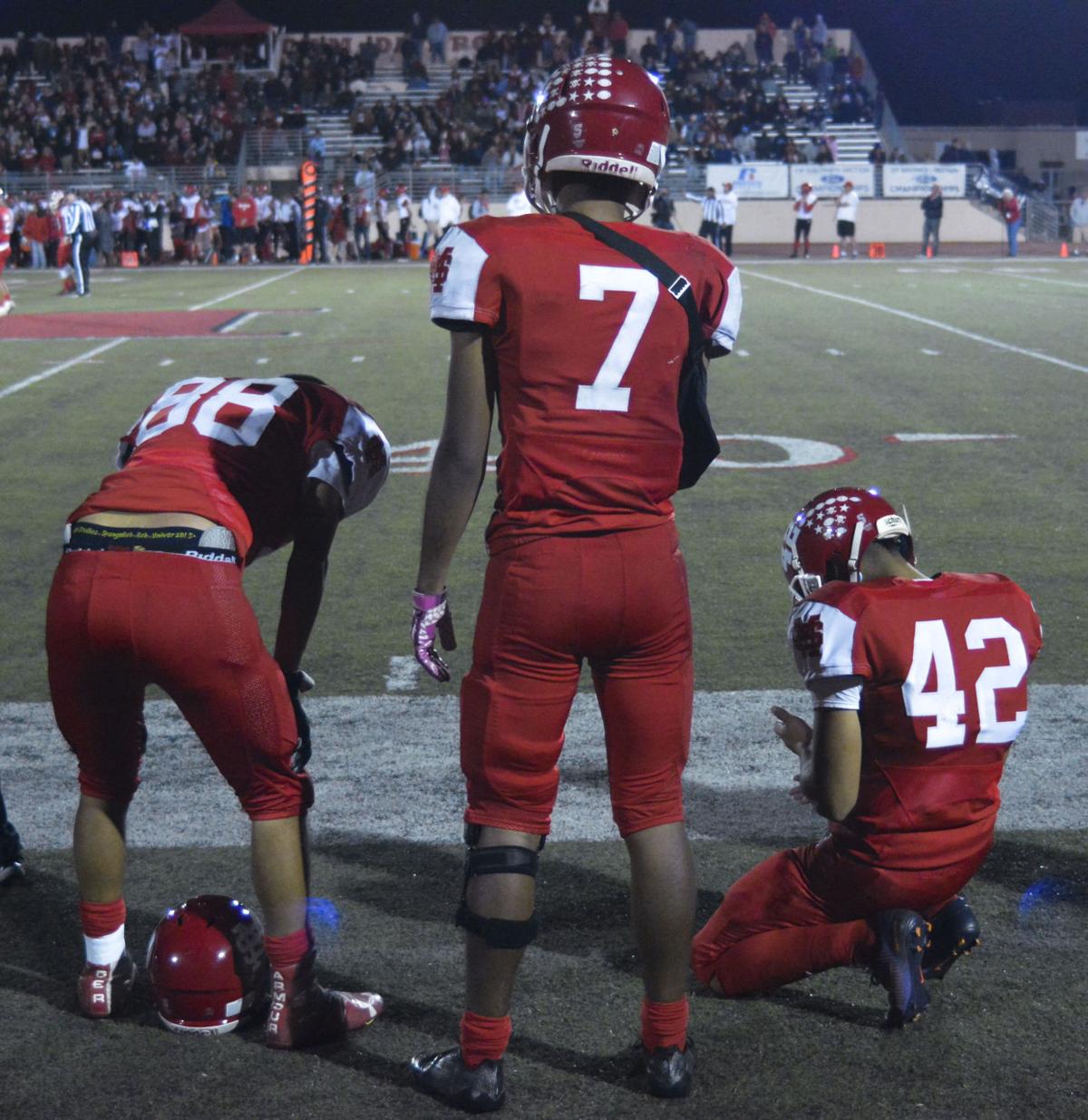 After a solid 2-1 start, the Saints had lost three straight including 49-12 to Santa Ynez in their most recent game. Besides, the injuries were mounting.

They had seen a second-half lead, and a chance to beat crosstown rival Pioneer Valley for the first time, slip away in a 32-28 loss.

Then came Santa Maria's bye week. Some teams don't like the bye week. Turned out, it came at a perfect time for the banged-up Saints.

"It gave us a chance to heal," said Santa Maria coach Dan Ellington as the Saints were rolling in the post-season.

Zane Sheckherd wraps up another productive season at Sonoma State

“I was a starter my freshman year,” at Sonoma State, Sheckherd said. “My sophomore year, I was one of the first players off the bench.”

Several Santa Maria starters who had been out gradually returned to the lineup as the wins kept piling up.

The Saints rebounded so well after the bye week that they won seven straight then hosted a divisional title game for the first time.

Big Bear beat Santa Maria 37-23 in the CIF Southern Section Division 12 final in front of an overflow crowd at Ralph Baldiviez Stadium on the Santa Maria campus. Still, the electric atmosphere made for an unforgettable night for the Santa Maria faithful.

After the bye week, quarterback Blake Truhitte and back Robert Ruiz, behind a solid offensive line, sparked a revved up running game.

Mora has indeed earned straight A's during his time at Santa Maria. He carries a 4.38 GPA. Mora was the SMHS nominee for the Northern Santa Barbara County Athletic Round Table Male Scholar Athlete scholarship honor.

Truhitte, the All-Area MVP that year, racked up 2,026 yards rushing and 31 touchdowns in the Saints' option offense. Ruiz ran for 1,094 yards and eight scores.

Santa Maria also had a dependable short-yardage back, Frank Lopez who averaged 4.5 yards a pop during his 90 rushes.

John Rojas blossomed into a solid secondary receiver, with 458 yards in receptions and six touchdown catches on the year.

Besides his work at quarterback, Truhitte helped anchor the Santa Maria secondary. He was also the team's punter.

With Gabriel Bravo and Gerardo Zul, the Saints had a strong pass rush. Zul racked up 16 sacks. Bravo had 14.

Santa Maria began Los Padres League play by breezing past Templeton then beating Morro Bay 40-19 in a tougher game for the Saints than the score indicated it was.

Ellington's squad scored a decisive 41-25 win at Nipomo in the league championship game. Santa Maria kicker Diego Villagran helped cement the win when he recovered his own second-half onside kick.

The Saints eased past Carpinteria in the first round of the playoffs then shocked top-ranked Montebello Schurr by scoring the last 28 points in a 42-21 win. Up 21-0 at halftime in its semifinal, the Saints withstood a third-quarter threat and won 35-14 at South El Monte.

As the Santa Maria wins kept growing, so did the excitement in the school football community. Santa Maria fans started filing in hours before the start of the divisional semifinal.

The divisional championship game was an occasion.

The start was pushed back to 8 p.m. on a Saturday night because of the annual Santa Maria Christmas Parade that same night. Santa Maria students, fans and alumni started rapidly filling the stands well before kickoff.

"When I heard we were in the championship game, I just had to get my butt up here," a Santa Maria alumnus told a reporter after he had made the drive from San Diego.

In the championship game, "We didn't do enough on defense to win," against a Big Bear triple option offense that just about never went to one particular option, the pass, said Ellington.

The Bears recovered a fumble at their 1 in the fourth quarter and on the next play, Zachary Bernard bolted 99 yards to put Big Bear up by two scores and seal it.

Still, it was an unforgettable year for the Saints. "We have a lot to be proud of," said Ellington afterward. "We accomplished a lot."

For today's Classic, we take a look back at the Saints' CIF run were they transformed from a 2-4 team into a squad with a spot in the Southern Section championship game at their own stadium.

Kenny Cress: Racing not the only reason a lot of people will be watching the NASCAR re-start

After 61-plus years on the planet, I am still not sure of many things. I am certain of this though: A lot of people will be paying attention to what goes on as the NASCAR re-start progresses, and racing is not the only reason why.

Santa Maria's Jonathan Ramos runs after catching a pass against Big Bear during the CIF-SS Division 12 championship game in 2017.

Santa Maria's Phillip Becerra makes a long catch to set up the Saints' final touchdown during the 2017 CIF title game against Big Bear.

Santa Maria defenders stop Big Bear's Isaiah Manos for a loss during a CIF-SS playoff game on Dec. 2, 2017. Players getting injured with concussions is a growing concern. On Saturday, Dignity Health Centers is hosting a symposium at Arroyo Grande High School to educate athletes and others about the problem.