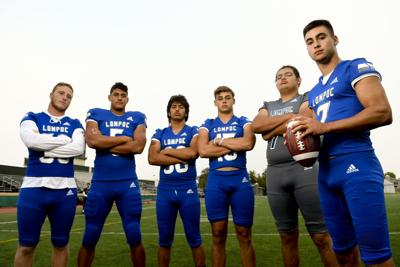 There's little question that Lompoc is the premier program on the Central Coast.

But the Braves have had back-to-back early exits in the postseason, getting knocked out in the first round last year and in the second round in 2017.

The Braves were on the brink of making the CIF-SS D4 title game in 2016, before falling to Corona del Mar 35-34 in the semifinals.

The biggest reason for the Braves' premature exit in the postseason the last two years? Mainly them playing in the third-highest division in the toughest section in the nation.

Now the Braves are in a much more competitive Division 5 in 2019 and they are, once again, loaded with talent.

There's little question that Lompoc is the premier program on the Central Coast. But the Braves have had back-to-back early exits in the posts…

With the expectations around the Lompoc High program, it's safe to say it's a title-game-or-bust type of season for the Braves.

Jones has also put together the best coaching staff in the 805.

He has former St. Joseph head coach Dustin Davis leading the defense and TJ Jordan, one of the top QB coaches around, leading the offense.

Longtime Hancock coach Ricky Aguilar, who also played at LHS in the early 2000s, is now on the staff. Aguilar was Hancock's defensive coordinator for six seasons.

Matt Sims, another LHS grad, has put together dominant offensive lines year after year. Harrison Keller, who coached at St. Joseph and spent time on Cal Poly's staff, is also at LHS.

On the field, the Braves return top starters at almost all the critical positions.

The Braves have a returning QB in Cameron Iribarren, the reigning Channel League Offensive MVP.

The biggest reason for the Braves' premature exit in the postseason the last two years? Mainly them playing in the third-highest division in t…

Ryan Morgan, a 6-foot-3, 190-pound safety/receiver, is committed to Wyoming.

The Braves have coaching, talent and experience and are in a good division for the playoffs.

"The expectations don't change," Jones said. "We want to compete for a league championship and try to make a run in this division."

Jones, himself a former Lompoc quarterback, has relied on talented QB play over the years, though Lompoc is renowned for its rushing attack.

Iribarren, a lefty, threw 13 TDs a year ago, against just four INTs. He did complete just 44 percent of his passes, though some of that can attributed to the inexperienced receiving corps the Braves featured.

There's little question that Lompoc is the premier program on the Central Coast. But the Braves have had back-to-back early exits in the posts…

Jones does want more consistency in the passing game in hopes of limiting the amount Iribarren runs in 2019.

"Cameron had a heck of a year last year. He's a dynamic player, the offensive player of the year in our league," Jones said. "This offseason he spent a lot of time with coach TJ working on the passing game. I think he seems more comfortable, more accurate. If he can get that going, we obviously have a lot of skill guys, weapons for him to throw to.

"If we can combine that, not be as one-dimensional as we were last year, I think we can be pretty dangerous."

"I can always work on the passing game, that's my main asset this season," Iribarren says.

The QB agrees that he has a lot to work with as far as offensive weapons go.

"I feel we're pretty stacked at the skill positions. We have a lot seniors there. We also have Joe Schumer out there," Iribarren said. "He's mainly a DB, but I feel he's going to be making a lot of big plays out there."

Jones also feels Cailin Daniels will be a player to shine in 2019. Daniels was up on varsity as a sophomore in his first time ever playing football. Daniels went on to have a stellar track season, competing in the long jump, triple jump and 4x100 relay, where he won league titles in all three.

"Last year was his first time ever playing and he's definitely made huge strides in the offseason," Jones said of Daniels. "Kind of an electric kid. We've got a slew of receivers working pretty hard. Joe Schumer, Leondre rotates back and forth, Christian Tenorio came up late last year and made some big catches for us. We definitely have more athletic guys returning than we do up front on the line."

Though the offensive line may lack experience, it does return star Jacob Nunez, who's committed to ASU. Nunez relishes his role as a nasty lineman who just plays.

"I feel like I'm under the scenes, working hard. Offensive linemen don't need interviews, don't need any of that," he said. "They're all strictly about the game, playing hard and protecting the quarterback."

Nunez has played on varsity all four years.

"I've developed a lot, mentally, physically and overall as a player and human being. I'm definitely a team player," Nunez said.

Jones said the biggest question mark on the defense is the front three after they lose Juan DeLuna and Geovany Lucatero to graduation.

"Just about everyone returns with the back guys," Jones said. "...We're going to be fast athletic, running to the football, if we can just find the three down guys I think we can be pretty good defensively."

Leondre Coleman (RB-LB) may be the most talented player in the area. He could probably go D1 at running back, receiver, linebacker, safety or even defensive end. The big question around Coleman, now a senior, will be has he developed everything off the field? Particularly his leadership skills. If Coleman puts it all together, everyone better look out and you better look to see him at a D1 program in 2020.

It's been awhile since a Lompoc-Righetti game has been a marquee matchup. But that's what this early-season game will be when the Braves host the Warriors in the second week of the season. Righetti made the CIF-CS D2 title game last year. Lompoc dominated the Channel League, but was knocked out in the first round of the CIF-SS D3 playoffs a year ago. This will be a big one.

More in Collection: 2019 High School Football - See all of our season previews, power rankings and player profiles right here! (9 of 17)

For the 2019 Orcutt Academy girls tennis team, there have been two partings that have been all sweetness and no sorrow.

The Spartans have departed from the CIF Central Section's Division 1, veteran coach Art Lopez said, and from the Mountain League. They will not miss either one.

The 2019 edition of the Righetti-Santa Maria football rivalry will take place at 7 p.m. Friday at Santa Maria's Ralph Baldiviez Stadium.

Cress Pass: Which HS football teams could make a run at a state title in 2019?

If the pre-season Maxpreps.com football rankings hold, the odds of some of the top football teams in the area having decent playoffs runs are …

Lompoc girls volleyball has a number of new players

The Lompoc Braves' girls volleyball team is in a rebuilding mode.

Lompoc Valley football: Can Braves get back on track against Bishop Diego? Will Cabrillo win at Rio Mesa?

A bad quarter of football Friday night cost Lompoc the game and a 2-0 start to the 2019 season. 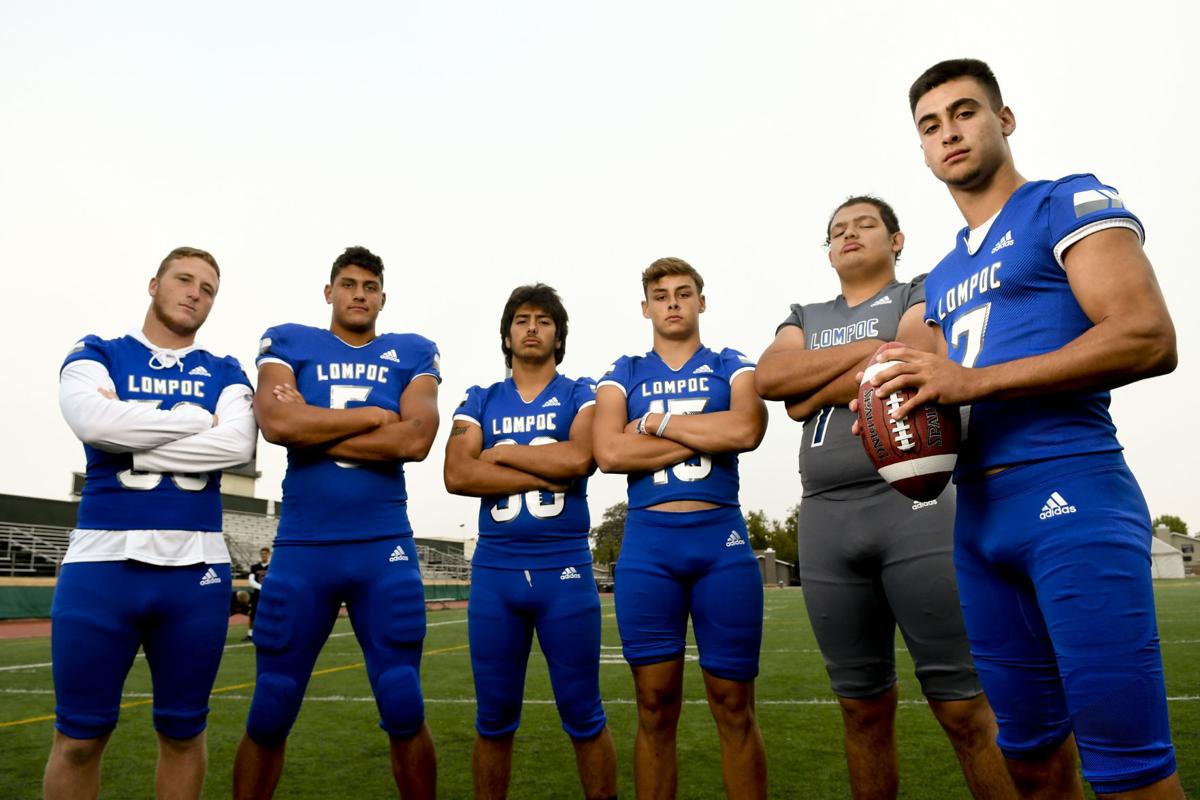 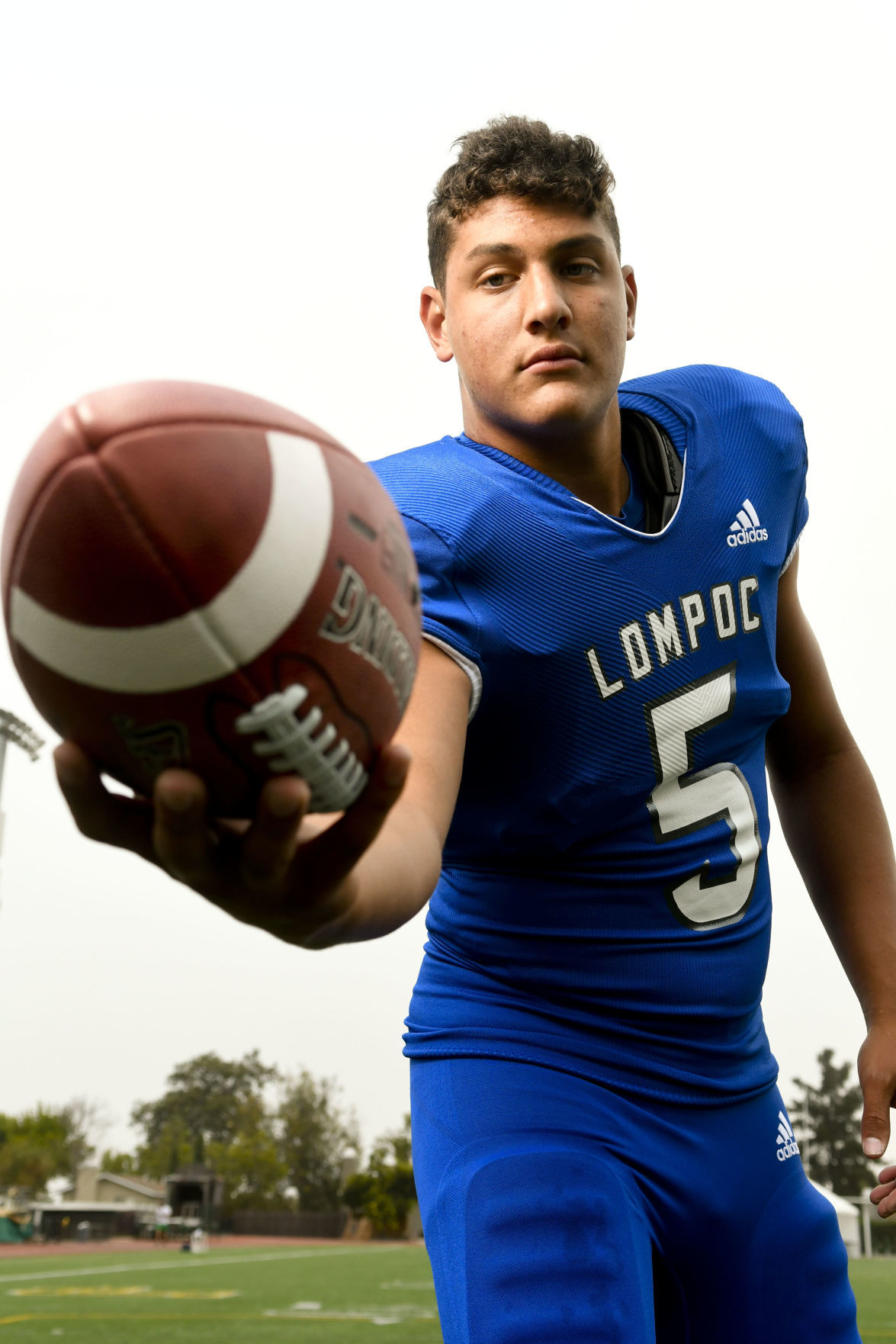 Ryan Morgan, Lompoc High School senior safety and receiver, is back on the field after missing most of last season with a broken collarbone. Morgan has committed to play for Wyoming.