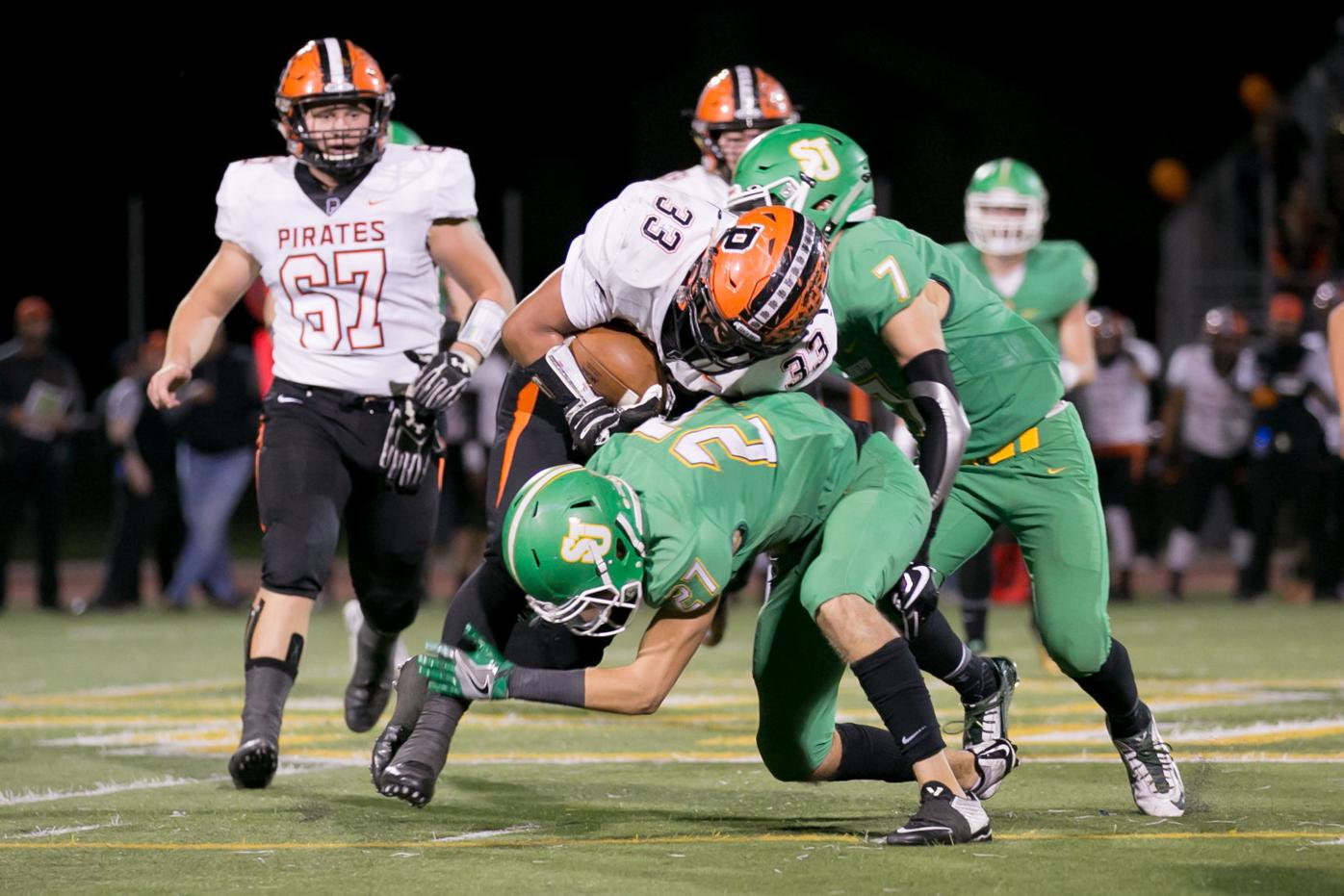 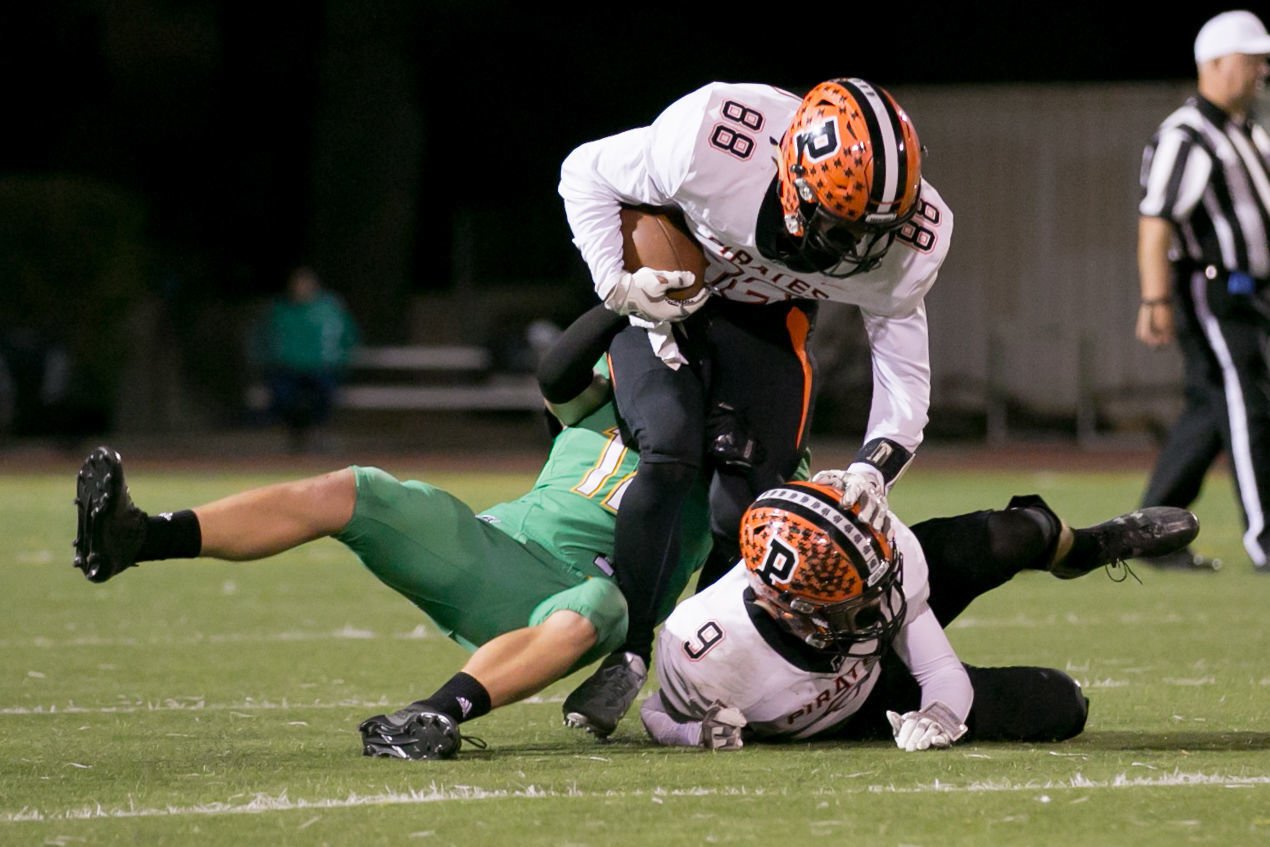 As the high school football season draws near, members of our sports staff is reminiscing some of their favorite football games from years past. Today, we look at the regular-season finale between St. Joseph and Santa Ynez, where the Pirates hoped to end a playoff drought.

The three-season stretch from 2015 to 2017 is a tough one to bring up for Santa Ynez fans.

The Pirate football team went 23-7 in that span, with two eight-win seasons and a 7-3 campaign.

What did the Pirates get to show for going 16 games over .500 in three seasons? Not a single playoff berth, thanks to a lop-sided league alignment and a bad-luck playoff division draw.

The Pirates' run was capped by one of the most noteworthy games this reporter has covered in 10 seasons of high school ball.

It was a Friday night in November of 2017 in Orcutt. The Pirates, sitting at 8-1 and chomping at the bit for a playoff berth and a big Los Padres League win, were playing at St. Joseph High School.

The showdown between Santa Ynez and St. Joseph had just about everything.

There was the bizarre first half where the Pirates' star quarterback threw five interceptions after throwing just three all season. St. Joseph turned those turnovers into only 14 points.

There was also a last-second finish. Santa Ynez, though, was unable to get off a last-second play and St. Joseph held on for a 20-14 win and a playoff berth.

The Pirates were once again on the outside looking in. There were no at-large berths available in Division 10 and for the third year in a row Santa Ynez was left empty-handed.

St. Joseph, meanwhile, got into the Division 5 bracket for sure. But not all was good for St. Joseph.

The Knights had to earn the win.

They led 14-0 at halftime, with Trevor Cole, Justin Wong, Tim Miller (twice) and Zach Miller all coming away with interceptions off passes thrown by Dustin Gregg.

Santa Ynez was down, but the Pirates received the second-half kickoff and marched 44 yards to paydirt, cashing in on a 1-yard touchdown run by Cash Transeth with 7:30 left in the third quarter.

But Wong, a St. Joseph senior, was ready to put his team on his back in the second half on senior night.

Wong caught a 38-yard touchdown pass from quarterback Dino Maldonado on a 3rd-and-21 play. Wong also had a 32-yard touchdown catch in the first half.

But Brock Marcois' point-after-try was blocked, meaning the Knights' lead stayed at 20-7.

The Pirates weren't out of it, though they were down 13 after three quarters. They marched down the field, mainly on the legs of Transeth, with some timely runs from Gregg.

Transeth ended the drive with a 13-yard touchdown run where it looked like he was stopped at the St. Joseph 6, but kept the pile moving into the end zone. Marcus Ray's kick cut St. Joseph's lead to 20-14 with 9:43 to play.

Teams exchanged three-and-outs before St. Joseph put together a drive. The Knights used Jayden Vargas to drive inside the Santa Ynez 30.

Facing a 4th-and-8 from the Santa Ynez 25, St. Joseph elected to go for it, with Maldonado throwing a pass near the end zone to Marc Rubalcaba. Santa Ynez defensive back Josh Patrick broke up the pass, resulting in a turnover-on-downs.

With less than 90 seconds left, Gregg attempted to lead the Pirates in a march down field. He hit Travis Vreeland for a 7-yard pass and a first down. Jasper Kadlec caught an 11-yard pass on 4th-and-9, moving the Pirates to midfield.

With no timeouts, facing a 1st-and-10 from the St. Joseph 44 and 20 seconds left, Gregg threw an out to Gabe Prendergast, who was tackled in bounds near the 38 with 15 seconds left.

The Pirates never got another play off.

They set and appeared ready to snap the ball but the head official held the play up, ruling the ball wasn't in play to be snapped.

The final seconds ticked off and Santa Ynez was left out of the playoffs for the third year in a row.

Wong had the best game of his senior season and, perhaps, his career. He had six grabs for 114 yards and two touchdowns to go along with an interception and handful of tackles and another two passes defensed.

Maldonado completed 20 of 30 passes for 228 yards and three touchdowns. Jayden Vargas, another St. Joseph senior, had 22 carries for 118 yards.

Friday night, McClurg was still holding out hope that his team could land an at-large bid for the playoffs. That hope was ultimately misplaced.

"We've been keeping track of all 36 divisional teams, win-loss record and place in their league," McClurg said. "There's actually four games tonight that could decide; there could be two at-large bids. I can guarantee you this: If there's one at-large bid we will get it.

"We may be traveling and we may play Pacifica, or a one or two seed, but the season isn't over yet in our minds. There's a somber mood but that's because they just lost one of the most heart-breaking games of their lives. My guys played with emotion and that's a testament to these guys and they bought into each other all year."

Instead, another stellar season went unfulfilled for the Pirates.