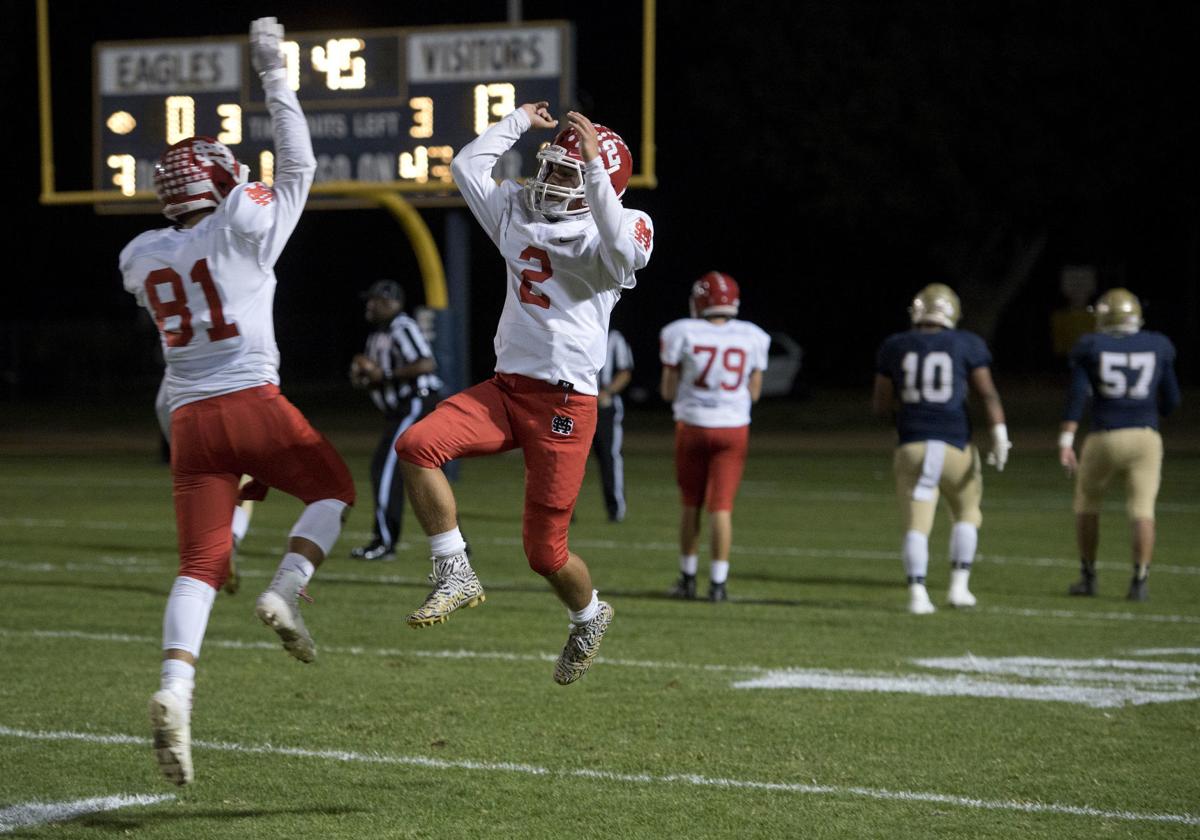 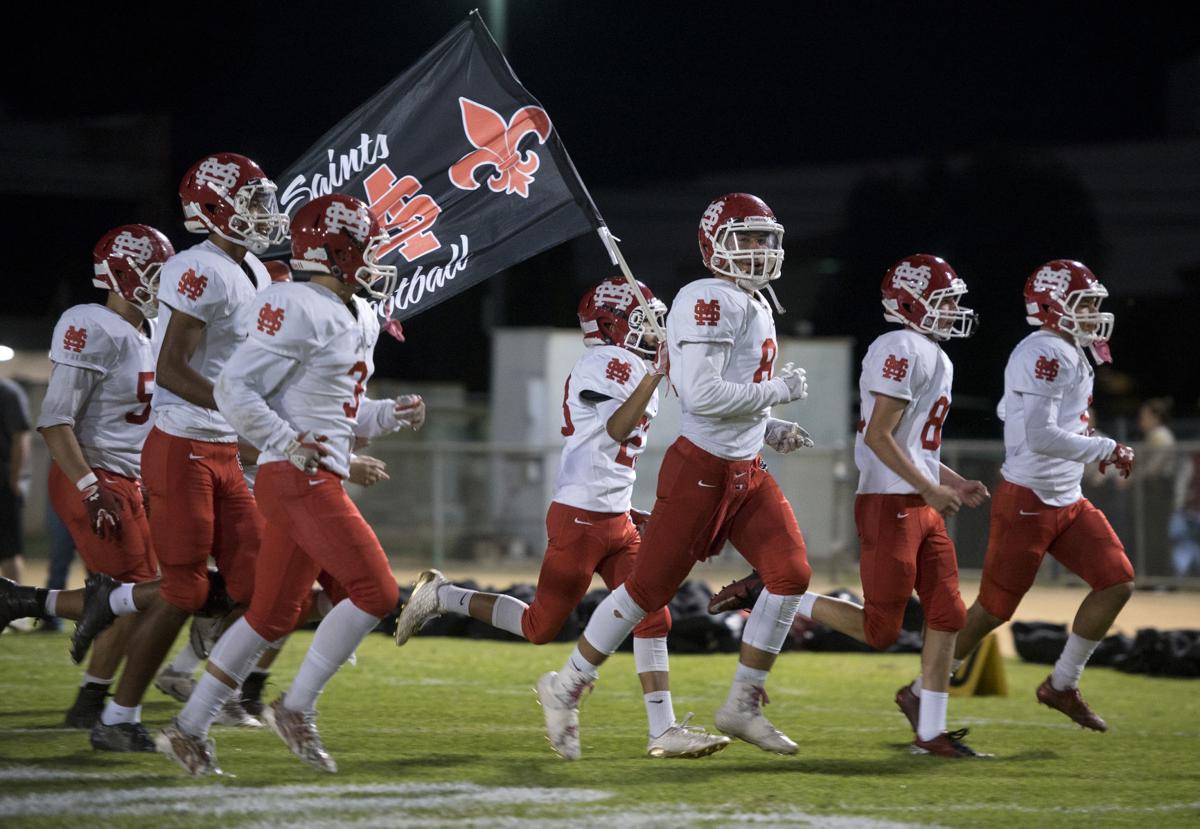 Santa Maria players run onto the field before the start of their CIF Southern Section Division 12 semifinal game against South El Monte on Nov. 24, 2017. 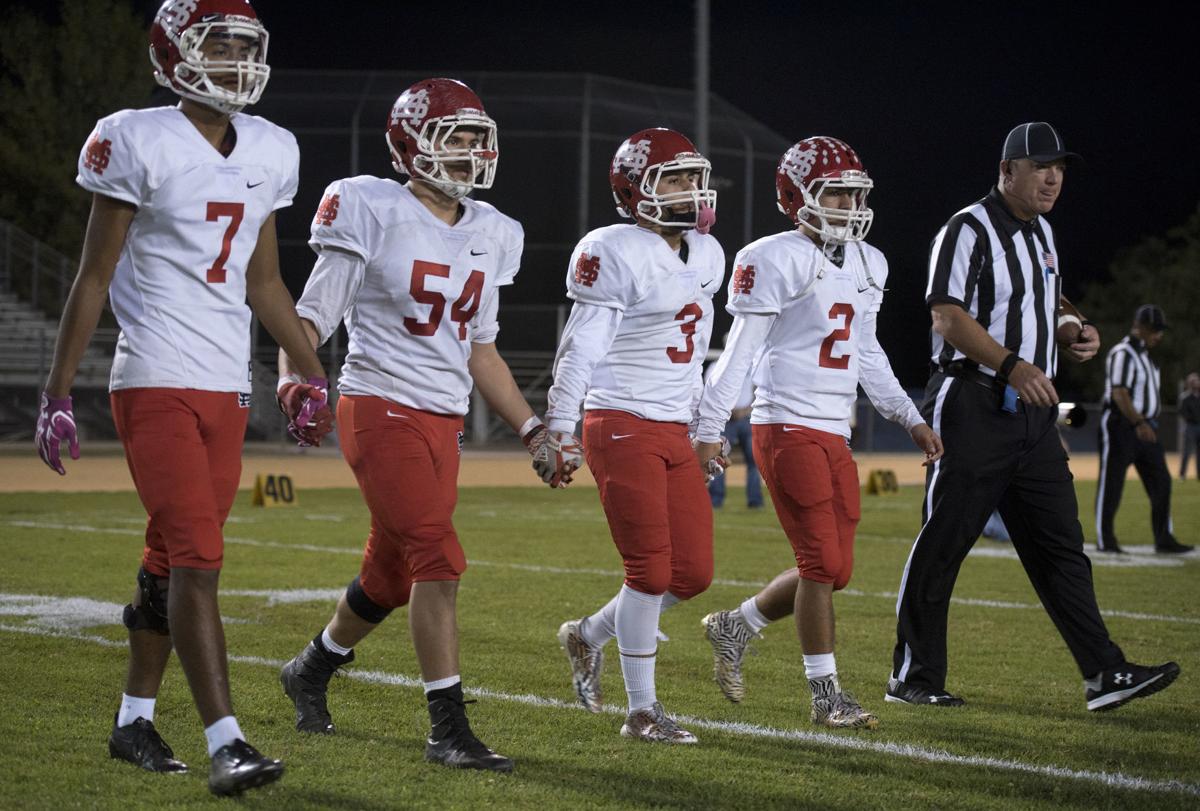 Santa Maria captains John Ramos (7), Gabriel Bravo (54), Bobby Ruiz (3) and Blake Truhitte (2) hold hands while they walk out for the coin toss before the semifinal game against South El Monte on Nov. 24, 2017. 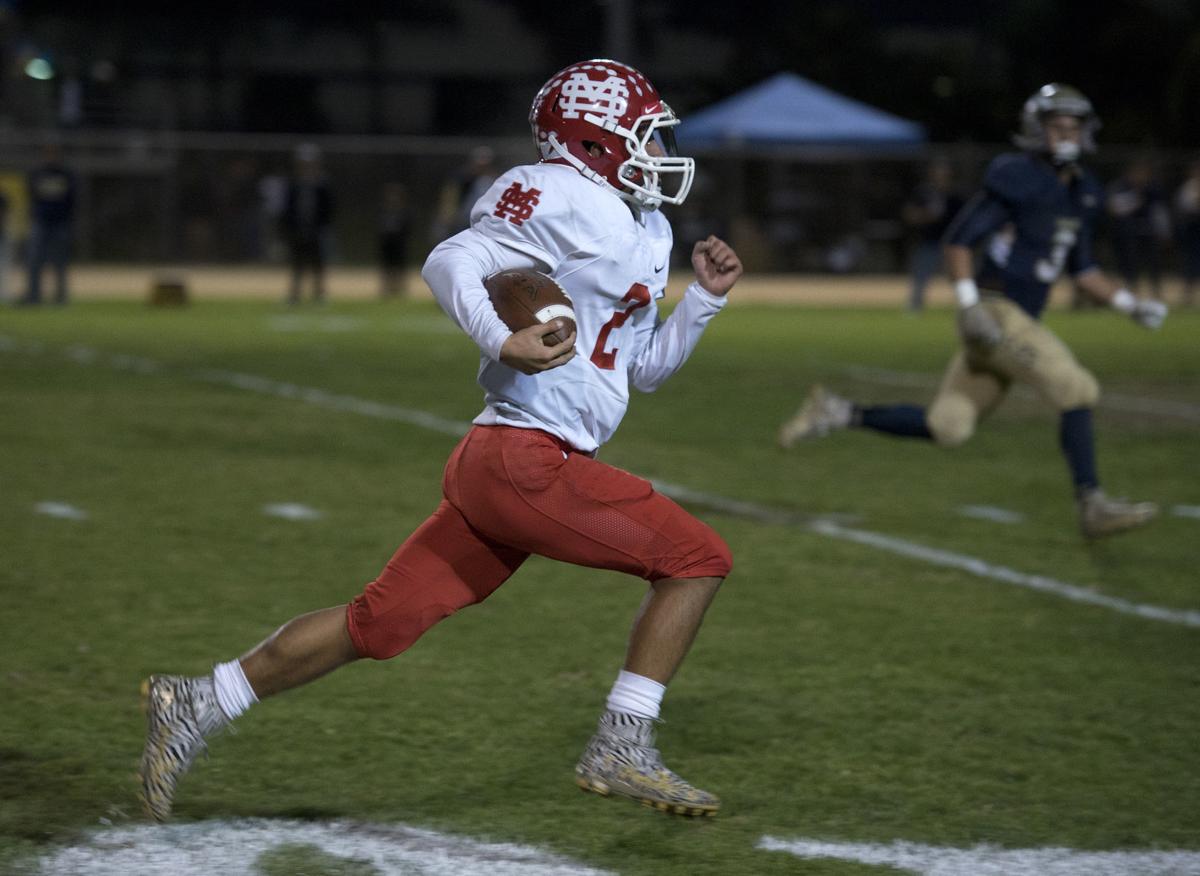 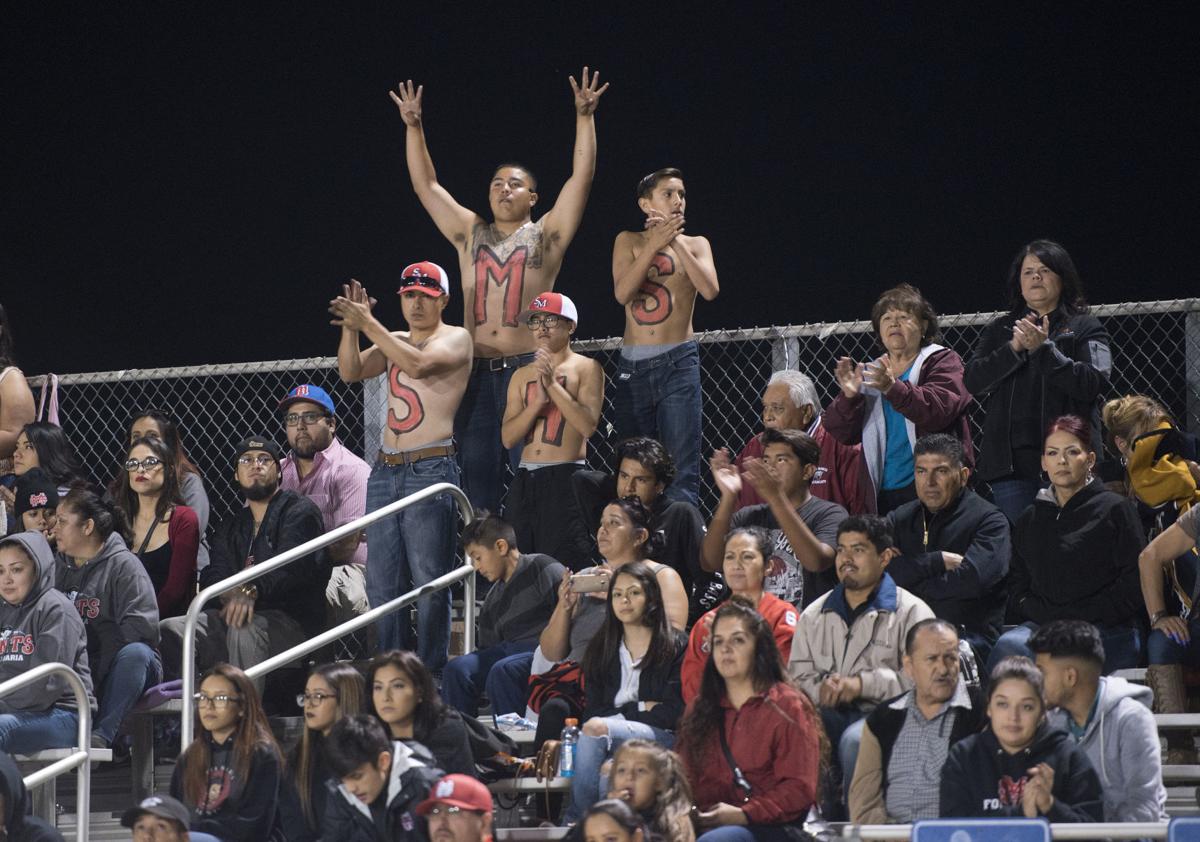 Santa Maria fans cheer on the Saints during their semifinal playoff game at South El Monte High School on Nov. 24, 2017. 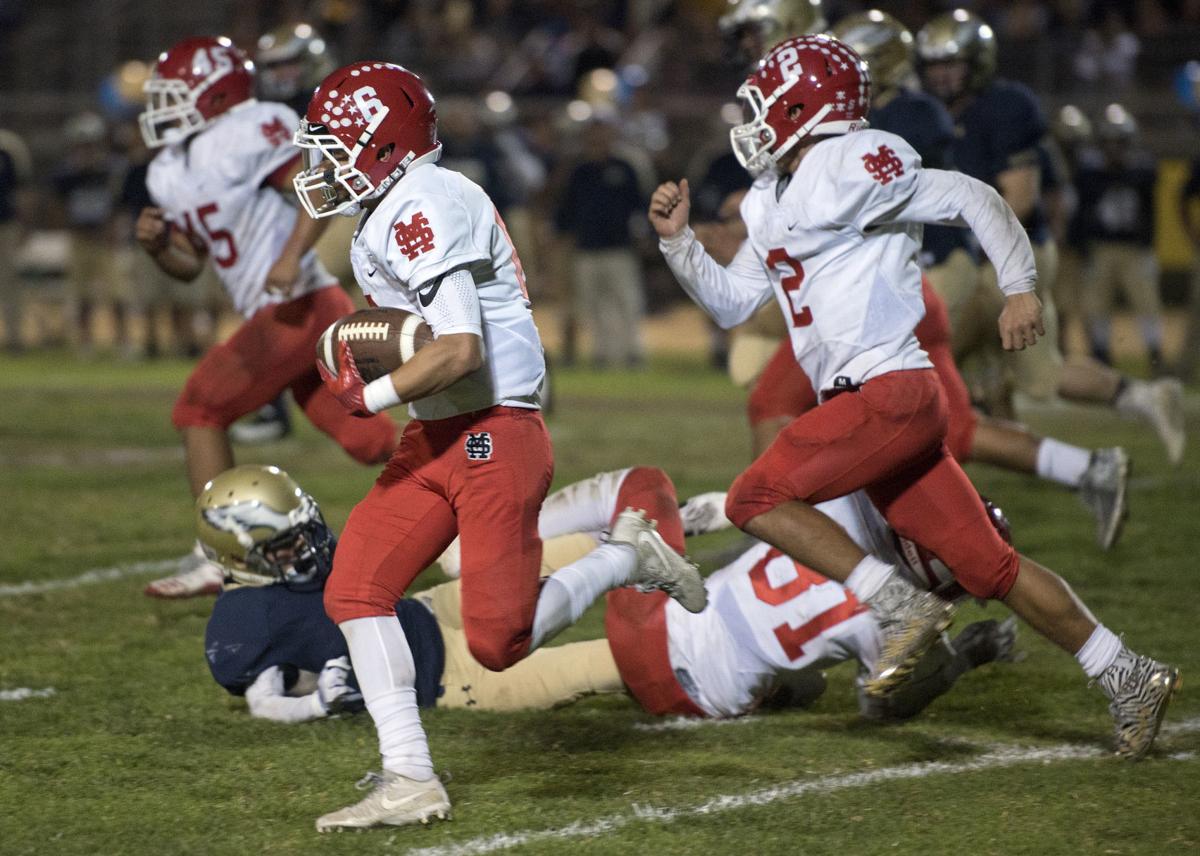 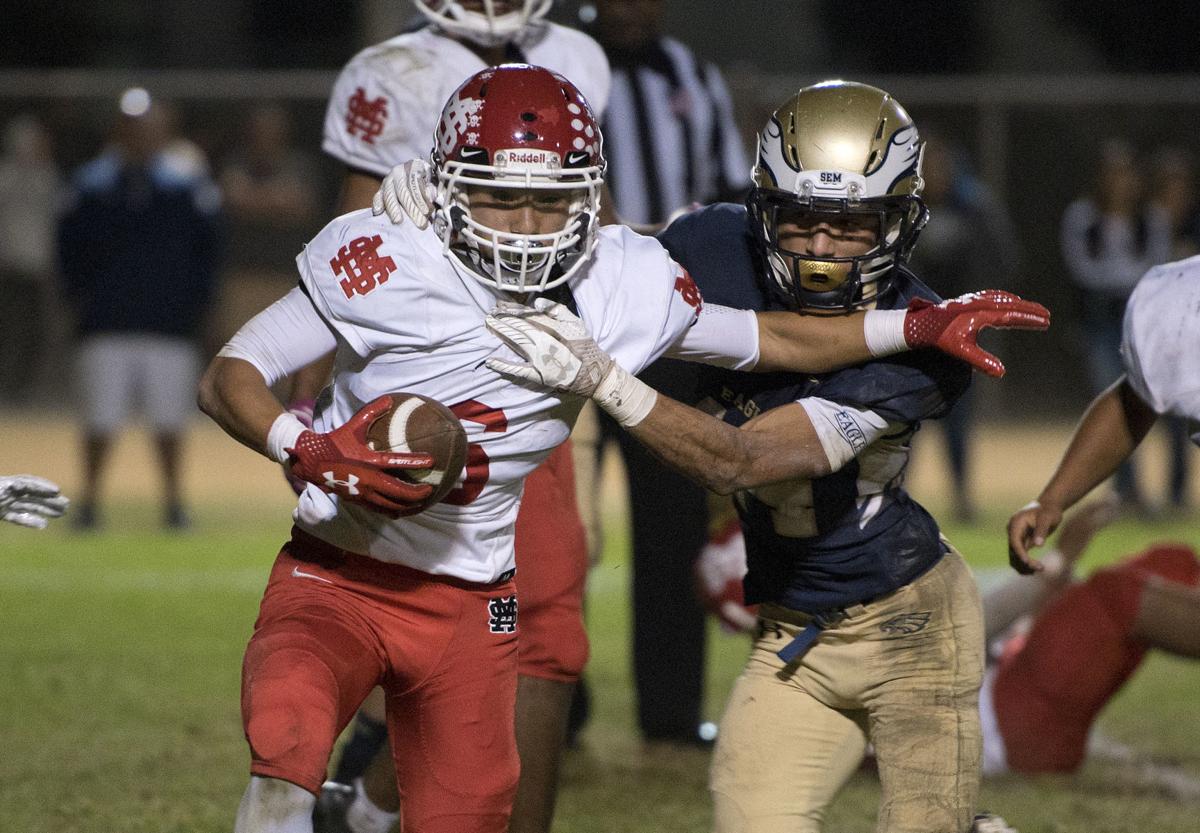 Santa Maria receiver John Rojas carries the ball during a game against South El Monte High School in the semifinals of the CIF Southern Section Division 12 playoffs on Nov. 24, 2017.

In 2017, a Santa Maria football team qualified for a sectional divisional championship football game for the first time this century.

To get there, the Saints scored a convincing semifinal win on the road.

Santa Maria fans started filing into the visitors side of the stadium hours before kickoff. After the game started, the Saints gave their fans plenty to cheer about.

“These kids just find a way to win,” Santa Maria coach Dan Ellington said afterward. “Our defense was playing great and our offensive line really opened some holes for our backs to run through.”

Santa Maria defensive linemen Gabriel Bravo, Jason Sanchez and end Gerardo Zul helped the Saints contain an offense that has been averaging more than 40 points a game for the second straight week.

Santa Maria defeated a higher seed for the second week in a row. The eighth-ranked Saints knocked out top-ranked Montebello Schurr the week before.

The Saints held star Eagles back Sal Tovar to 50 yards in the first half, but Tovar broke loose for a 58-yard touchdown run on the first play of the second half.

The Eagles drew within 21-14 when Daniel Olmos hit Jarvis Alexander-Godinez for an 11-yard touchdown pass late in the third quarter.

The Saints re-gained the momentum when they answered with a 67-yard scoring drive. Truhitte finished it with an 11-yard touchdown run.

The Saints forced the Eagles to go three-and-out the next series, Truhitte scored on a 17-yard run and the Saints were on their way.

Tovar rushed for more than 2,000 yards that year. The Saints kept him to a fairly quiet 134.

“It was just a matter of knowing the formations,” said Sanchez. “They’d go to the ‘I’, the single back. We knew what they were going to do.”

Bravo and others credited the scout team. “They gave us some beautiful looks in practice of what the opponent is going to do,” Bravo said.

Truhitte ran for 177 yards. Robert Ruiz had another 75. Jon Ramos had seven receptions for 110 total yards. He caught a 54-yard touchdown pass from Truhitte.

Santa Maria bolted to a 21-0 halftime lead in its first semifinal playoff appearance since 1988.

Truhitte scored from three yards out on the first series of the game, the Eagles went three-and-out then Truhitte sprinted into the end zone from 43 yards out. Ramos caught the big touchdown pass in the second quarter.

The defense kept the Eagles to 104 yards of offense in the first half. John Rojas blocked a 32-yard South El Monte field goal try shortly before intermission.

Next in our series of Central Coast Classics is the story of Santa Maria's CIF semifinal win over South El Monte in 2017. Blake Truhitte ran for four scores and threw for another as the Saints rolled into a CIF title game with a 35-14 win.

Santa Maria's football team has been able to adapt throughout its postseason run.

Saints' fans make the long drive to support their team

Santa Maria traveled well for the Saints’ first semifinal appearance in the football playoffs since 1988.

Can sports resume in some form this spring? Arroyo Grande and Nipomo highs still have some hope

In a recent social media post athletic directors Stephen Field and Russ Edwards stated, “per yesterday’s email, the Lucia Mar School District has not shut the door yet on returning to school this year.

“Although there is no immediate end in sight it is only April 9. The next school board meeting is April 21. The state of our local area at that time will probably be a huge factor in the school board’s decision process to keep the door open to possibly return to school at this point this school year or not. So let’s all continue to do our part to stay ‘social distanced’ and get this curve tracking downward.”

Running the anchor leg in the 4x100 relay at a Central Coast Athletic Association Meet on March 11, Langley took the baton with a three-meter deficit and turned it into a split-second victory, racing past some of the fastest kids in the area to give his team the win.

A few days later, though, the St. Joseph junior saw his season put on ice.

Santa Maria players run onto the field before the start of their CIF Southern Section Division 12 semifinal game against South El Monte on Nov. 24, 2017.

Santa Maria captains John Ramos (7), Gabriel Bravo (54), Bobby Ruiz (3) and Blake Truhitte (2) hold hands while they walk out for the coin toss before the semifinal game against South El Monte on Nov. 24, 2017.

Santa Maria fans cheer on the Saints during their semifinal playoff game at South El Monte High School on Nov. 24, 2017.

Santa Maria receiver John Rojas carries the ball during a game against South El Monte High School in the semifinals of the CIF Southern Section Division 12 playoffs on Nov. 24, 2017.