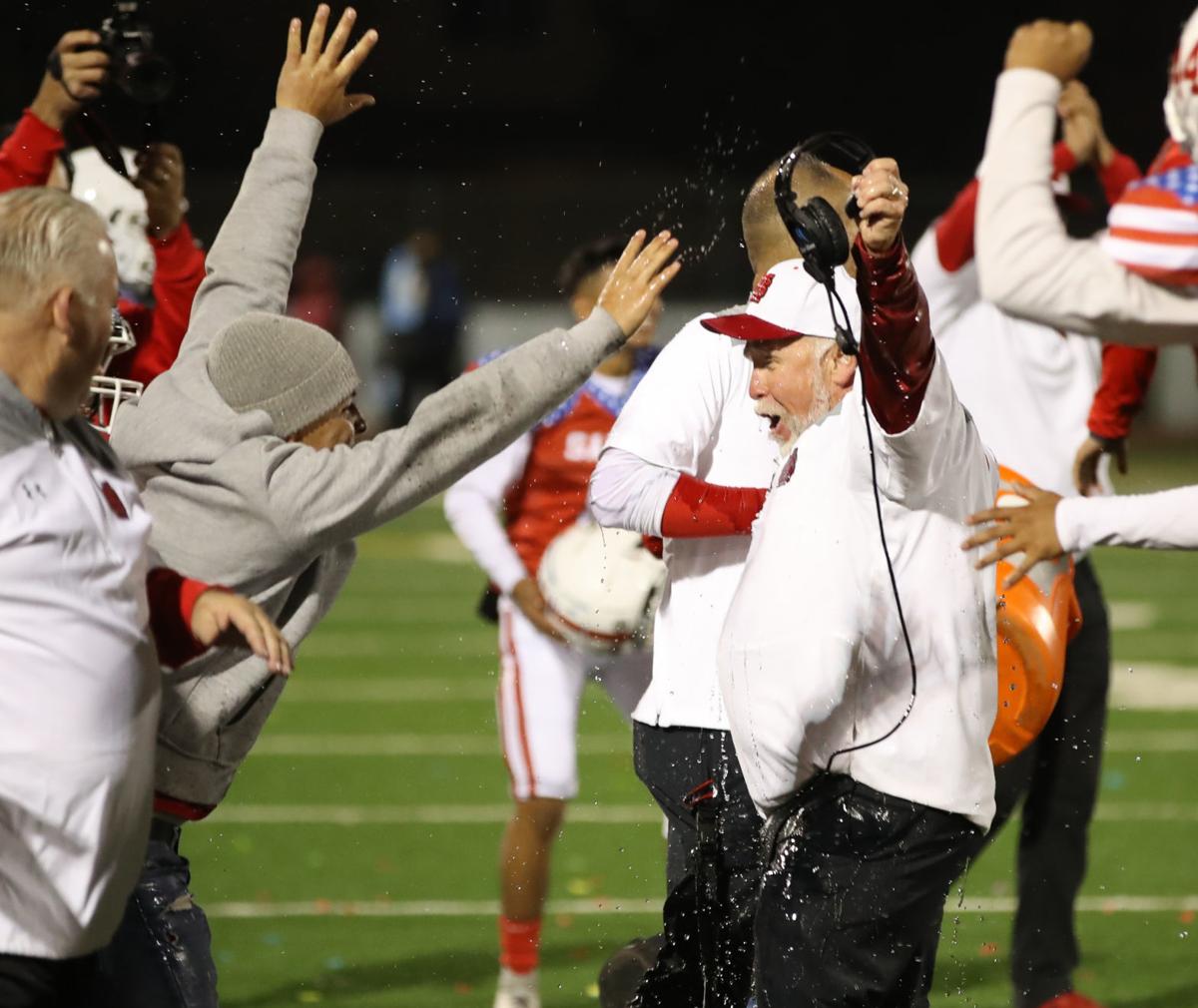 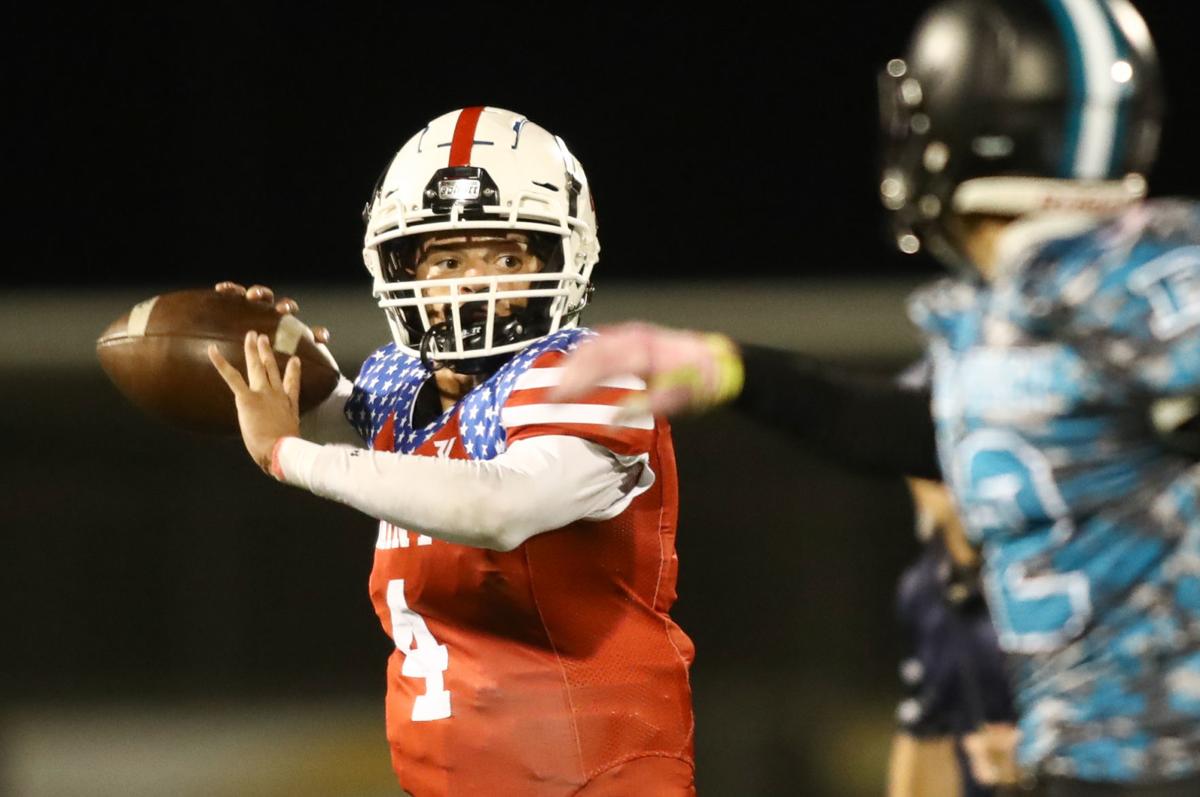 Santa Maria quarterback Dominick Martinez rolls out during the Main Street Classic game against Pioneer Valley on Nov. 1, 2019. Martinez scored the Saints' only touchdown in their 10-6 win over the Panthers, the school's first win over rival Pioneer Valley. 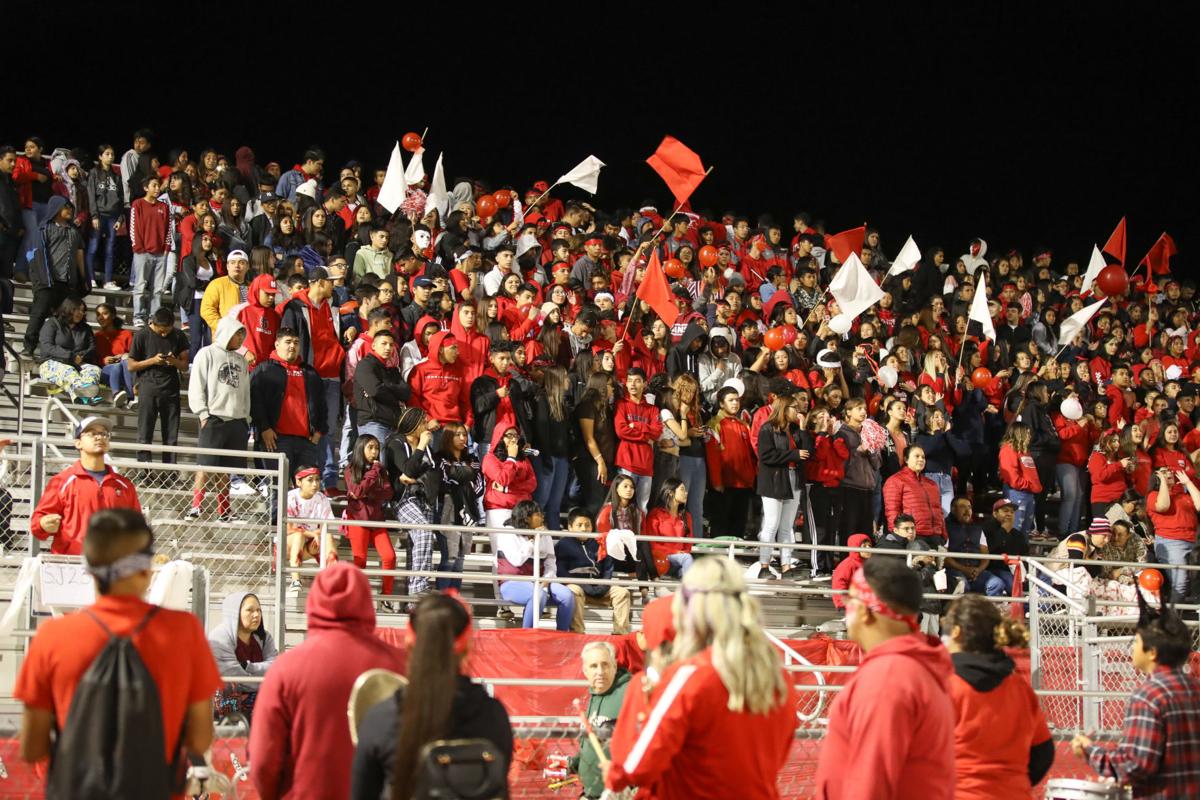 Santa Maria fans packed the bleachers at Pioneer Valley to support their team during the football game last November. 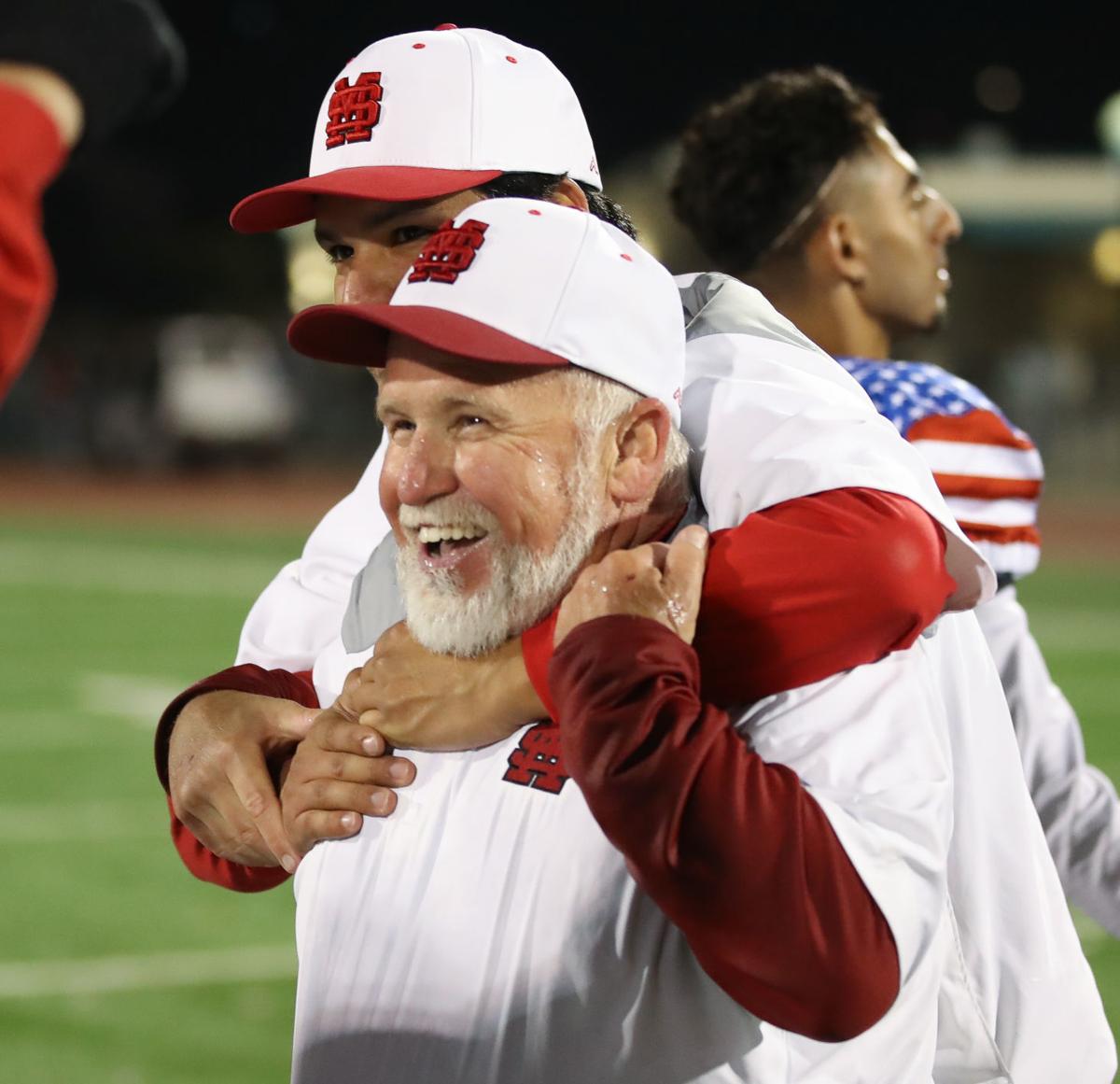 A jubilant Dan Ellington gets a hug from a member of his staff following Santa Maria High's first win of the yearly rivalry game against Pioneer Valley.

The Saints were either blown out, competitive or beaten in the final moments in their first 13 tries against rival Pioneer Valley. They finally turned the tables on the Panthers last November, coming out victorious in a gritty 10-6 victory to finally get that monkey off their backs.

The Saints' one big play from scrimmage on that chilly November night in 2019 in front of an overflow crowd at Pioneer Valley was enough. Quarterback Dominick Martinez sprinted around left end early in the third quarter for a 64-yard touchdown run, and the Saints edged the Panthers 10-6.

A holding call wiped out a would-be touchdown pass from Pioneer Valley quarterback Danny Martinez to Christian Morin near the end of the third quarter.

The win was especially sweet for Santana because, "It came against my old team," he said.

"I played at PV my freshman year. I got moved up to JV near the end of the year. My cousin (Pioneer Valley defensive tackle Tony Escobedo) was in this game."

Escobedo helped lead a defensive surge that kept the Saints to 26 yards in the first half and, save the Martinez touchdown run, checked the Santa Maria attack for most of the second, but it wasn't quite enough.

It wasn't quite enough because the holding foul cancelled the would-be Danny Martinez 26-yard touchdown pass to a wide open Morin.

A 13-yard Martinez to Morin pass on fourth down on the next play was shy of the first down, and the Panthers couldn't come close to scoring after that.

After the Dominick Martinez touchdown run, Andres Vargas kicked the eventual winning extra point for the Saints. Vargas also kicked a 25-yard field goal in the fourth quarter when a drive stalled at the Panthers 8.

Pioneer Valley led 6-0 at halftime. Danny Martinez connected with Elias Martinez (yep, another Martinez) for a 17-yard touchdown pass near the end of the first half to cap an 80-yard scoring drive. The PAT kick missed.

As the Panthers were trying to mount a last-ditch drive in the closing minutes, Danny Martinez, under a big rush, had to throw a pass that wound up well short of the line of scrimmage.

The subsequent intentional grounding call put the Panthers at second and 31 from their 9 and essentially sealed the outcome. The Panthers had to punt and the Saints, after getting a first down, ran out the clock.

The Saints were without Sammy Herrera, the second-leading rusher on the team behind Dominick Martinez and a big return man.

Herrera, who had a 99-yard kickoff return for a score that season, was out with a broken wrist.

With Herrera out, the Panthers usually stopped the Saints' prolific read option attack.

Dominick Martinez completed one pass, for 10 yards, and threw an interception.

He carried the ball 23 times for 127 yards unofficially, with 64 coming on the big scoring run.

Danny Martinez, with 59 yards, was the leading rusher for the Panthers who, unofficially, out-gained the Saints 225-145.

Delano Kennedy beat Santa Maria 40-28 the following week in the first round of the playoffs.

Delgado said he has been working out on his own, but has not been able to throw. "I am currently recovering from an elbow injury," he said.

Santa Maria quarterback Dominick Martinez rolls out during the Main Street Classic game against Pioneer Valley on Nov. 1, 2019. Martinez scored the Saints' only touchdown in their 10-6 win over the Panthers, the school's first win over rival Pioneer Valley.

Santa Maria fans packed the bleachers at Pioneer Valley to support their team during the football game last November.

A jubilant Dan Ellington gets a hug from a member of his staff following Santa Maria High's first win of the yearly rivalry game against Pioneer Valley.