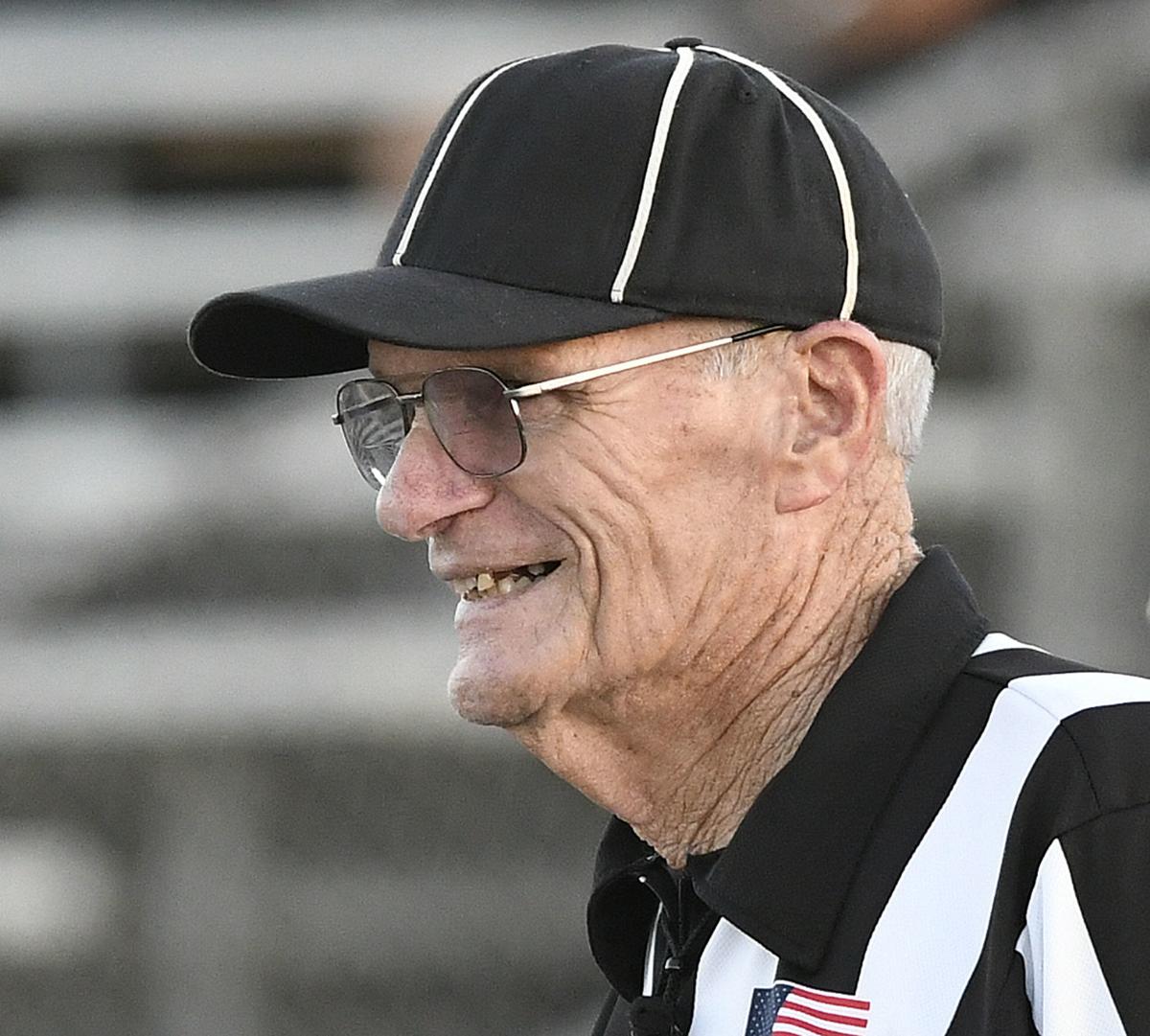 Line judge John Iribarren, who is in his 59th season of officiating, follows the action in Righetti freshman football team’s game against Paso Robles last fall. 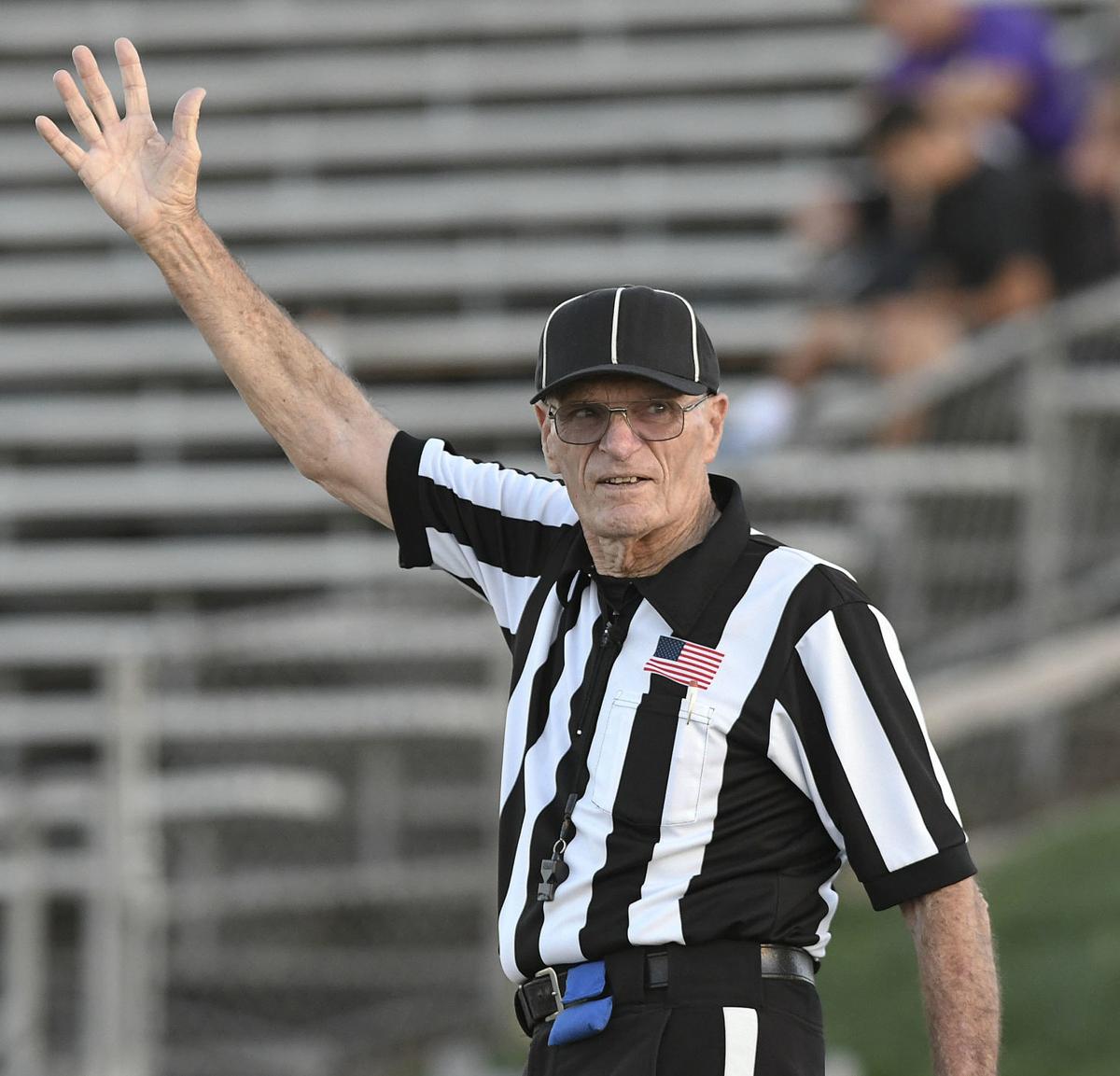 Line judge John Iribarren, who is in his 59th season of officiating, follows the action in Righetti freshman football team’s game against Paso Robles last year. 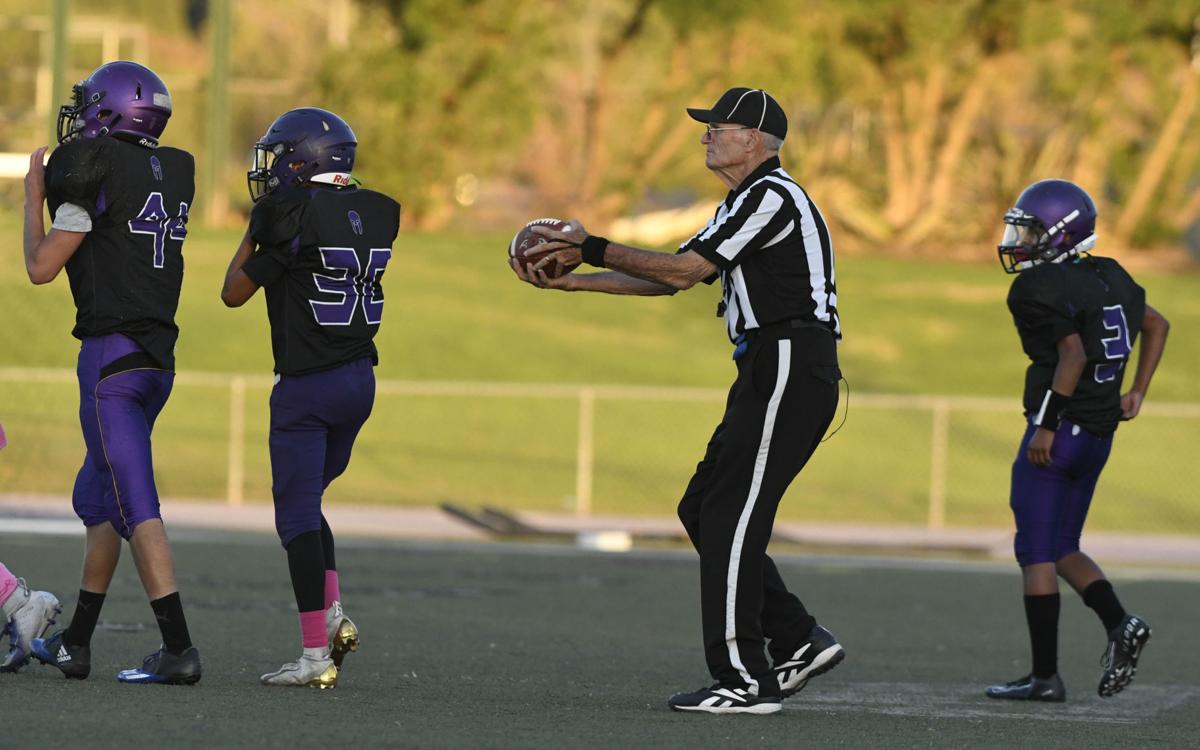 Line judge John Iribarren, who is in his 59th season of officiating, follows the action in Righetti freshman football team’s game against Paso Robles.

When John Iribarren walked off the Righetti High School gridiron on a Thursday afternoon in late October of last year, he was unsure if his 59th year as an official would be his last or not.

However, "I'm about 80 percent sure this will be my last year," Iribarren said days before he had worked the Paso Robles-Righetti freshman football game that night.

Fatigue was not the reason Iribarren, then 80, was mulling retiring from officiating.

"I still have a lot of energy," Iribarren said.

Iribarren said he got into the business because, "I wanted to stay in sports. I wanted to keep working with the kids. I got my start officiating Sunday fraternity flag football games at Cal Poly," where Iribarren attended.

He is the longest tenured member of the Los Padres Football Officials Associations (LPFOA). Iribarren also served as a teacher, coach and dean of students at Mission College Prep in San Luis Obispo. He retired from the school in 2012 after 50 years of service.

In our series looking at some of our top sports stories from the last 20 years, we take a trip to last year to remember the career of longtime area sports official John Iribarren, who was hanging up his stripes and whistle as the season was winding down.

"It was hard to leave teaching and coaching there after doing it for so long," he said.

Iribarren has officiated football, baseball and basketball games for the past six decades. His body of work has been good enough that he was selected 15 times to work NCAA Division I football bowl games.

John Iribarren, no relation to Willie and Cameron Iribarren who distinguished themselves as football players for Lompoc High School, has been long-time Central Coast official Mike Ostini's mentor.

"John was my mentor when I broke in," said Ostini, himself a 43-year veteran as an official on the Central Coast, where he is the high school football officials assigner.

"Mike and I get to talk about the new officials who are coming up, the young guys who are getting ready (to work varsity games)," said Iribarren.

"It's a hard thing for young guys to make that commitment, but overall we have had a real good year."

The seven-man crew Ostini, who also worked the Paso Robles/Righetti freshman game, put together had 283 years of combined coaching experience.

Iribarren was the line judge that Thursday night. Ostini was the umpire. The referee was Jerry Mrozek. The head linesman was Tom Lake, the side judge was Garold Shaffer, the back judge was Jim Gin and the field judge was Bobby Kennedy.

John Iribarren had a quiet night of officiating that evening. Much of the action was on the other side of the field from where Iribarren was stationed.

His signals were quick and concise, though, and he clearly let inquiring wide receivers know before the ball was snapped that, yes, they were onside.

At game's end, Iribarren held the ball aloft signalling, possibly for his last time in Santa Barbara County, that the game was over.

With a little extra time on our hands, we are taking a look into the past of prep sports on the Central Coast. Our sports staff has been going through our archives searching for photos and stories highlighting some of the most pivotal games area teams have played over the last two decades.

You can support the hard work of our local sports team by signing up for a News+ Membership.

A few weeks after the deadliest fire in the United States in a century, and the deadliest in California history, the 2018 Camp Fire, Hancock C…

Justine Roland and Mariah Cooks had a lot of big nights together when they played for the Righetti girls basketball team. One particularly big…

When John Iribarren walked off the Righetti High School gridiron on a Thursday afternoon in late October of last year, he was unsure if his 59…

The score was tied at the 2:34 mark of the second overtime period of this 2017 title game when Santa Ynez freshman Emily Cunningham uncorked a…

Cameron Walker had at least the most decorated career a Righetti High School basketball player has ever had. Walker was all-everything before …

The St. Joseph boys basketball team was riding high in 2016. Then along came No. 4 Playa del Rey St. Bernard and their dynamic senior point gu…

He was an All-Western State conference point guard during his freshman season, and Shane Carney’s Hancock College basketball career was rollin…

The Righetti baseball team’s first playoff game in the CIF Central Section, in 2019, was a success. It was a success because Ryan Delgado gues…

Hard-throwing Righetti senior right-hander Katie Chenault was the Santa Maria Times All-Area MVP in 2013, and she showed all of that when her …

In 2017, a Santa Maria football team qualified for a sectional divisional championship football game for the first time this century. To get t…

Current professional marathoner Jordan Hasay had a lot of huge moments when she ran for Mission College Prep High School. One of the biggest f…

Central Coast Classic: The Cassidys adopt Leza and Hosanna in a touching act of kindness

On July 5, 2011, the Cassidys formally adopted two biologically unrelated youngsters in Ethiopia who would eventually become Leza and Hosanna …

Bidding to become the first Santa Maria football team ever to beat a Pioneer Valley squad, the Saints held a slight third-quarter lead in this…

In order for the Hancock College football team to earn its second consecutive bowl win, all Bulldogs quarterback Matt Garcia had to do was lit…

The Lompoc Braves went 1-9 in 2009, playing in the tough PAC 7 League with the big schools in the area under legendary coach Robin Luken.

Righetti senior right-hander Matt Sauer had an ERA of just over 1 going into this 2017 CIF Southern Section Division 3 semifinal, and it figur…

The Saints ended a major drought in 2017. For the first time in 60 years, Santa Maria High School captured a baseball championship.

Go through other stories highlighting Prep history on the Central Coast

From the Vault: Brad Memberto's career as a sports writer

There are many debates to be had on things concerning the Central Coast. However, there's one topic that, frankly, is not up for discussion. T…

From the Vault: Mark Brunell's journey from St. Joseph to the Rose Bowl and then the NFL

Mark. Brunell. The most successful NFL player from Santa Maria.

The Kansas City Royals will kick off their 2019 season a week from today with a home set against the Chicago White Sox.  For the first time si…

From the Vault: Robin Ventura's days as a hooper at Righetti

One day after getting the jolting news that playing softball for her dream school, San Diego State, was no longer a possibility for next year, Righetti High School senior Mackenzie Kestler got busy putting her plans for college on re-start.

Line judge John Iribarren, who is in his 59th season of officiating, follows the action in Righetti freshman football team’s game against Paso Robles last fall.

Line judge John Iribarren, who is in his 59th season of officiating, follows the action in Righetti freshman football team’s game against Paso Robles last year.

Line judge John Iribarren, who is in his 59th season of officiating, follows the action in Righetti freshman football team’s game against Paso Robles.