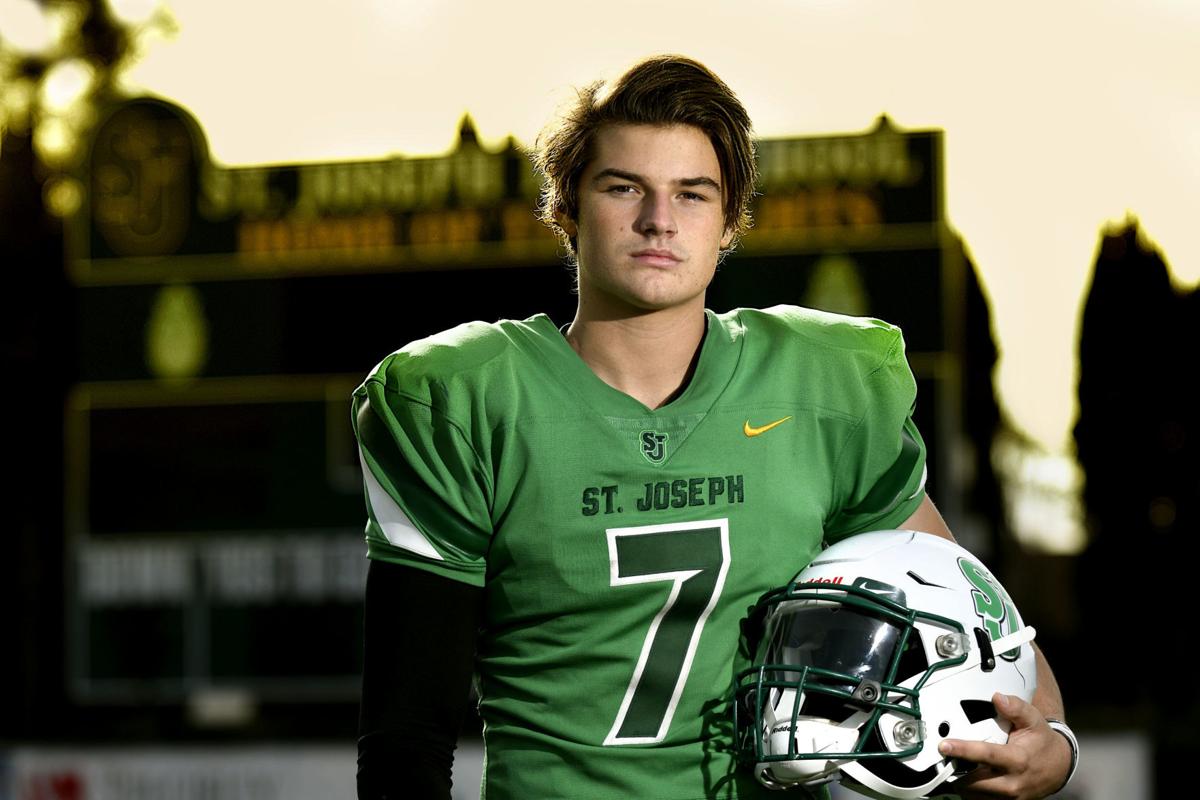 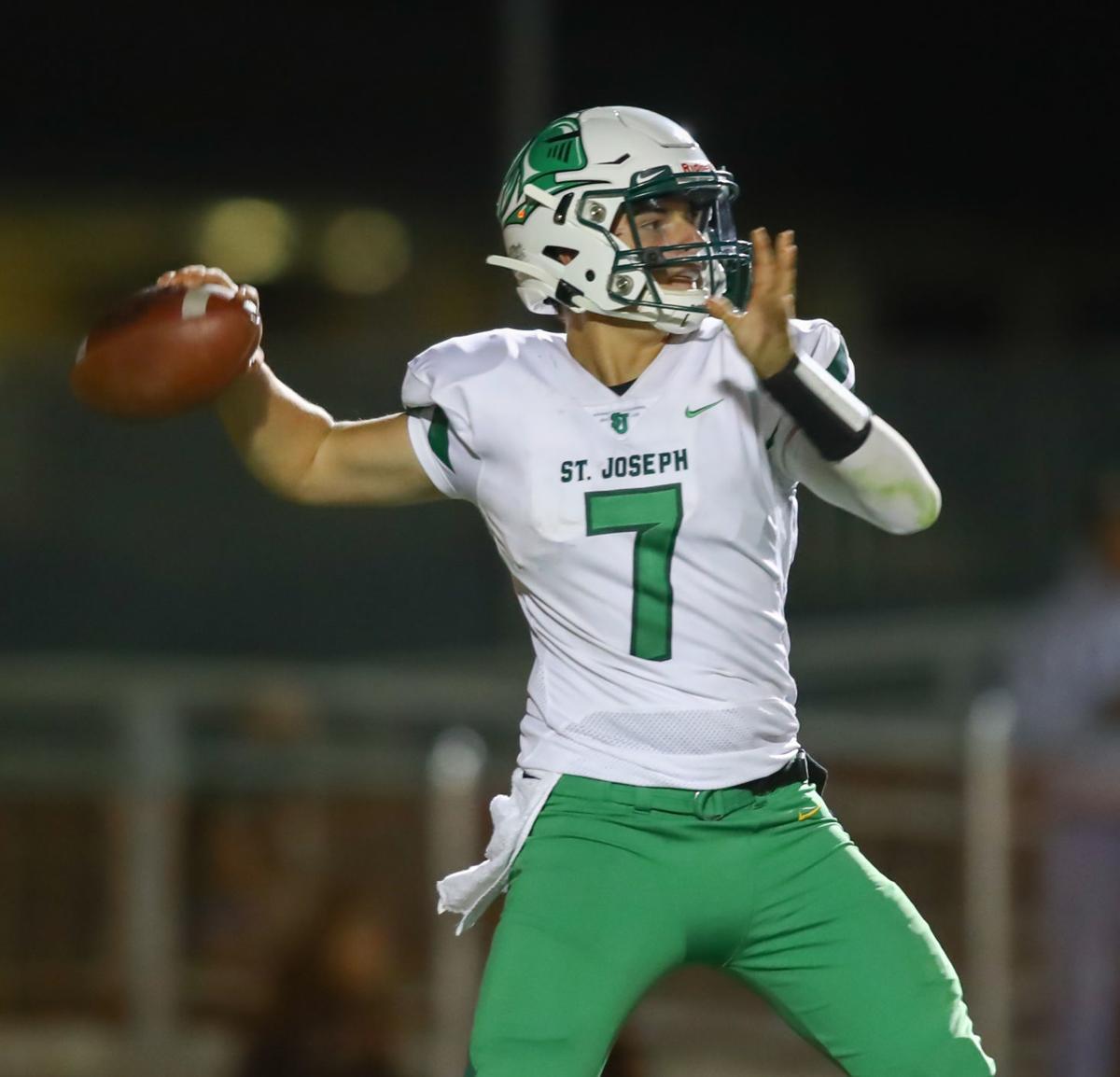 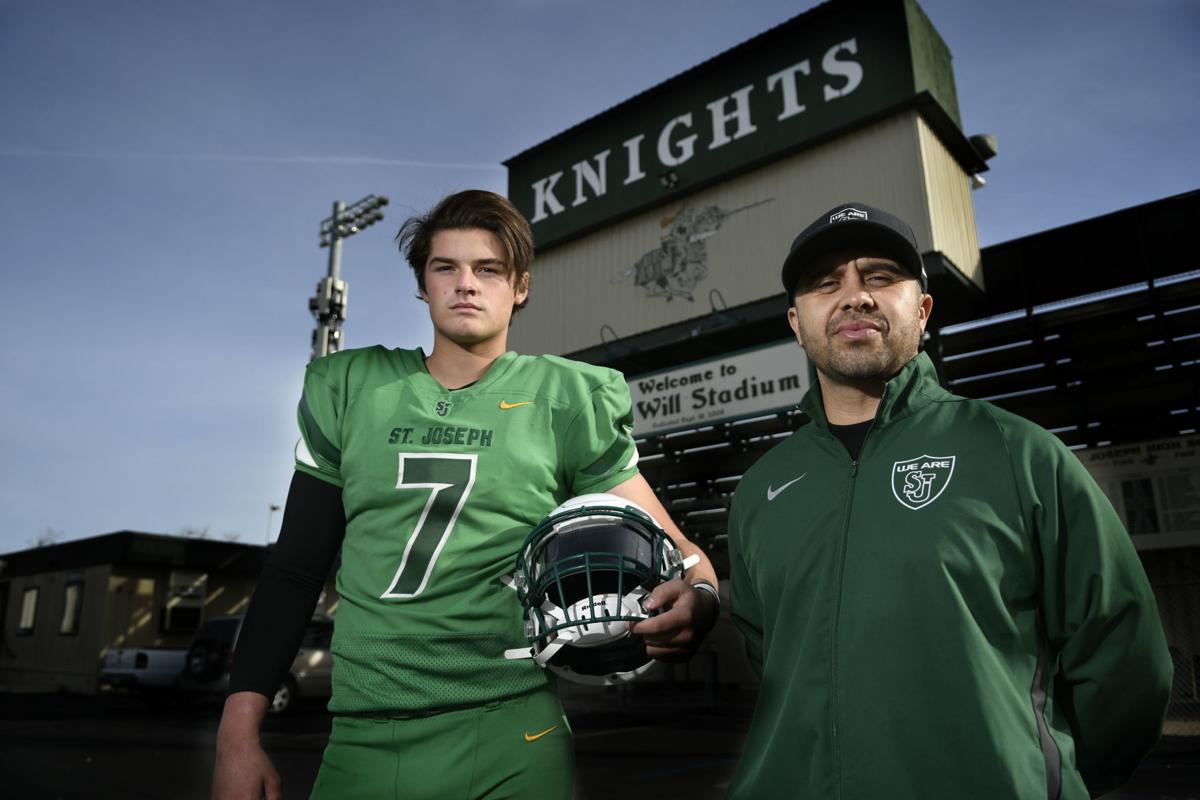 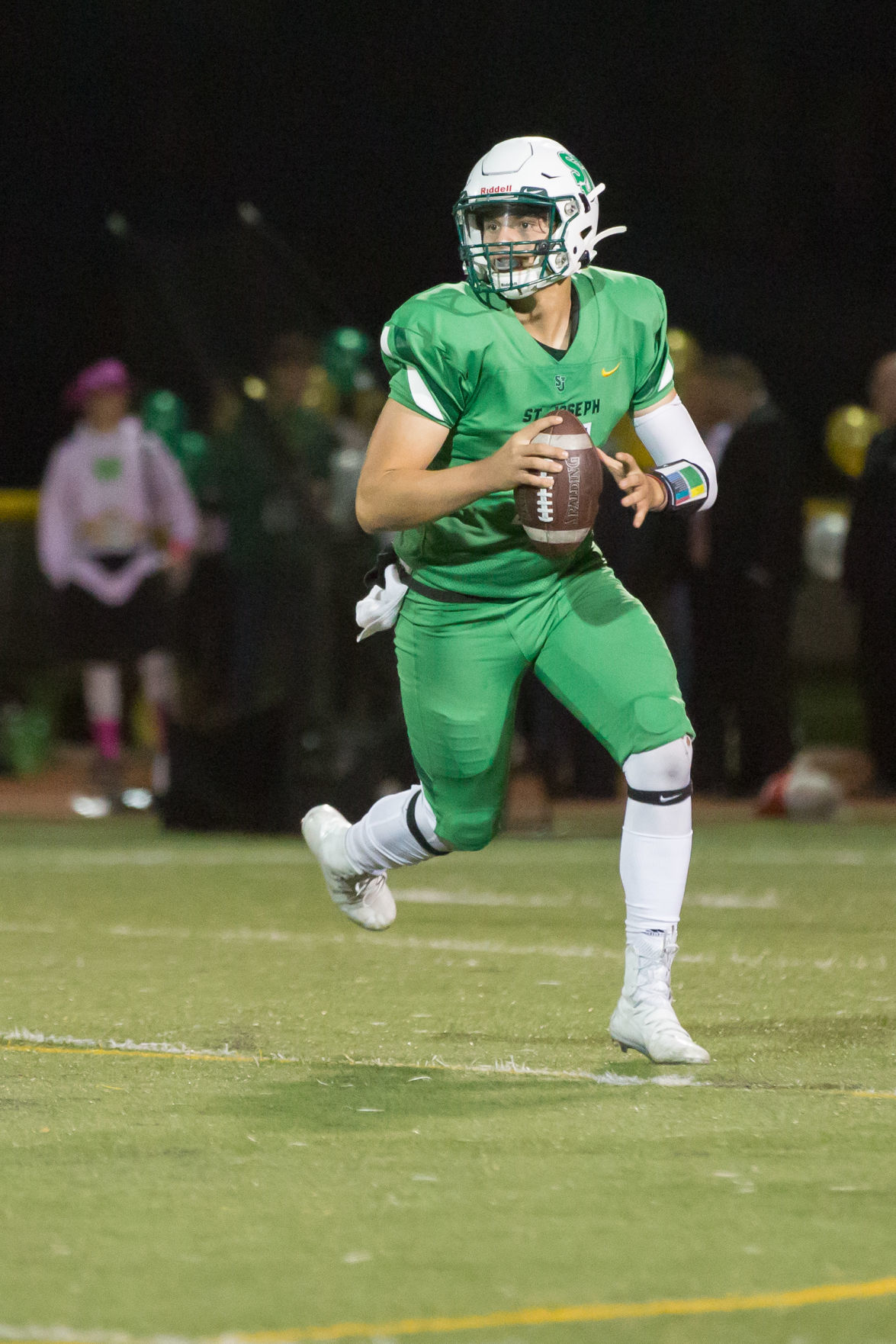 St. Joseph High quarterback Hunter Barnhart rolls out of the pocket in search of an open man during a game against Paso Robles on Oct. 18.

The odds were pretty low that Hunter Barnhart would be standing on the football field at St. Joseph High School in mid-December, wearing his shoulder pads and jersey while holding his helmet in what could be the final time he ever dons a football uniform.

Barnhart was there to talk about his team's successes, his Mountain League MVP award and to reflect on his senior season of high school football.

It was unlikely to find Barnhart standing there because he didn't know what kind of impact he'd be able to make for the Knights before the season began. The quarterback missed the first four games due to CIF transfer rules and the Knights lost his first start to fall to 2-3 on the season, culminating in a three-game losing streak.

Barnhart was also new to the program. He spent the first three seasons playing football at Paso Robles High and most of his free time went to baseball, where he's signed to play for Arizona State.

Photos: Check out our All-Area football covers, dating back to 1985

We have been picking All-Area MVPs for decades. Check out our front covers from our All-Area teams dating back to 1985.

But with Barnhart comes magic.

The naturally talented quarterback electrified the St. Joseph offense. With the swagger and charm the 6-foot-2 signal-caller provided, the Knights embarked on a seven-game win streak, an unbeaten run through the Mountain League and an appearance in the CIF Central Section semifinals.

Barnhart's biggest quality may be his laid-back attitude, which took some pressure off a team that was struggling when he became eligible.

"The biggest thing, for me, was just having fun," Barnhart said. "It was easy for me to come out here and gel with the team because it was so much fun. I just love playing the sport."

Barnhart certainly does love the sport, but now he must answer this question: Will he ever play it again?

"I haven't decided anything, but definitely baseball is the No. 1 sport so far," Barnhart said. "But I don't know what my future holds."

His coach Pepe Villasenor, the All-Area Coach of the Year, would like to see Barnhart's football career continue, but not at the expense of his future in baseball.

It hasn't taken Pepe Villasenor long to hit his stride coaching on the Central Coast.

Villasenor has trained NCAA Division I and NFL athletes, so he has a pretty good idea of the talent it takes to play at that level.

The Righetti girls volleyball squad's and the St. Joseph girls tennis team's respective 2019 seasons were marked with a lot of big accomplishments and a lot of heartbreak.

Barnhart does admit that baseball comes a little easier for him, but won't say which sport he enjoys playing the most.

"I think I have fun with both of them, but no comment on which one is my favorite," he said. "But I definitely have fun in both. Baseball is kind of the sport that comes naturally to me, the one that I love. Football is kind of the one I have to grind for."

Though Barnhart's physical tools set him apart on the field and his electric play ignited the team, Villasenor says there's a quiet hard-working side to the talented quarterback.

"I think what's visible to us as a coaching staff and to the players, which may not be visible to those on the outside, is that he is very talented, very athletic, but he has a great deal of humility and respect for his teammates," Villasenor said. "He came in and said that he would do anything to help the team, whether it was punting, playing DB, receiver, or what have you. It wasn't as though he came in and said he wanted to be the starting quarterback.

"That speaks volumes of his character and the respect he has for the young men he plays with."

Barnhart is the only St. Joseph player to win the All-Area MVP award this decade. The last All-Area MVP from St. Joseph was running back K.J. Cusack, who won in 2009 before playing for Cal Poly.

Up next: We'll publish our entire 2019 All-Area Football Team in Friday's edition of the Santa Maria Times.

Photos: Check out our All-Area football covers, dating back to 1985

We have been picking All-Area MVPs for decades. Check out our front covers from our All-Area teams dating back to 1985.

St. Joseph QB Hunter Barnhart speaks after guiding his team to a 21-14 win at Arroyo Grande. The Knights host rival Righetti next week with the Mountain League title up for grabs. #santamariatimes #StJoeatAGHS pic.twitter.com/ay3bR7Id3T

St. Joseph QB Hunter Barnhart is 7-1 as a starter for the Knights. He leads his team into Friday night’s CIF semifinal at Memorial in Fresno. #santamariatimes @SJKnightsFB @StJosephSports pic.twitter.com/xwvAx7Rlza

Opposing defenses often knew when Righetti quarterback Logan Mortensen was going to throw. They just had a hard time stopping him.

St. Joseph High quarterback Hunter Barnhart rolls out of the pocket in search of an open man during a game against Paso Robles on Oct. 18.