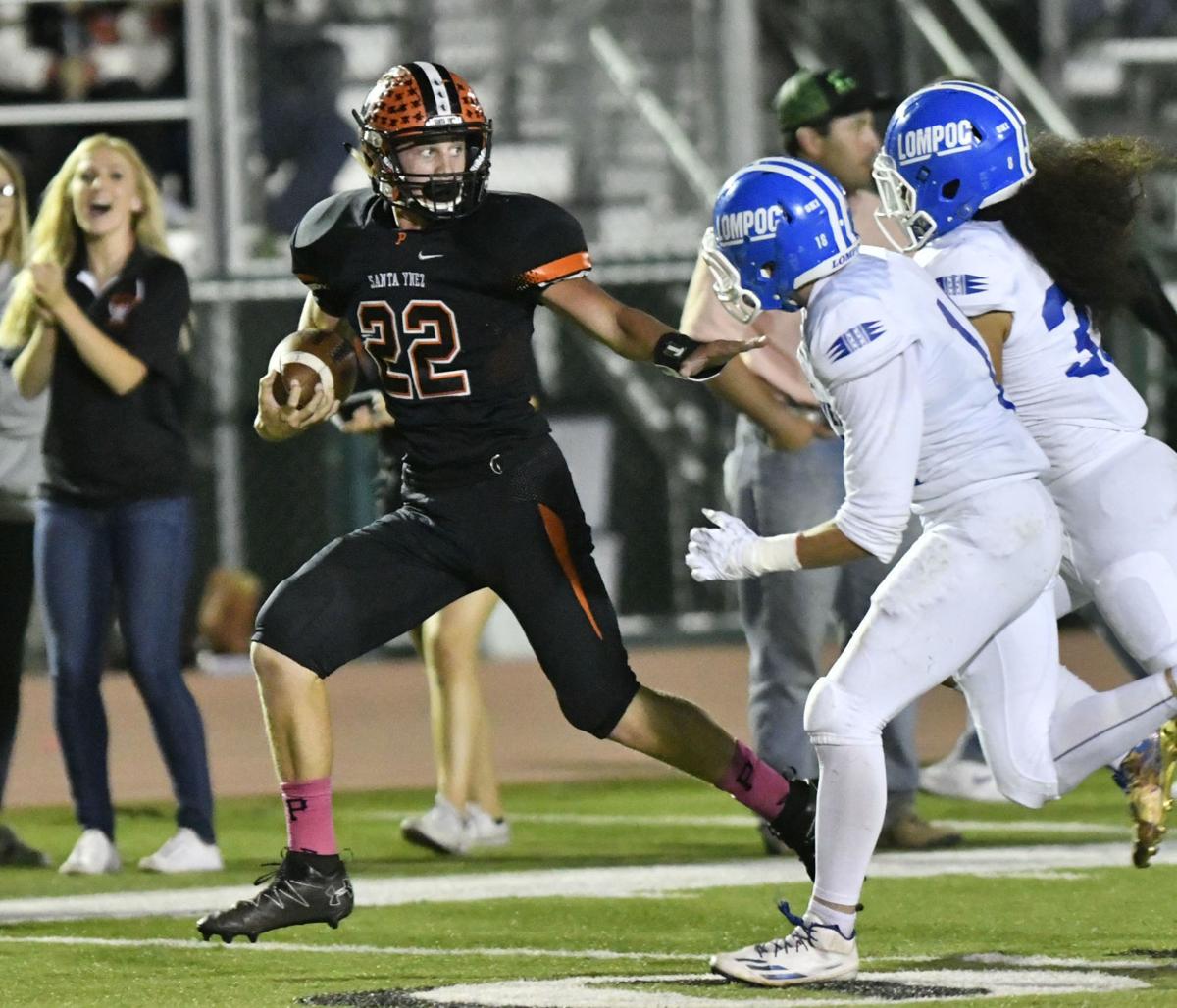 Santa Ynez' Travis Vreeland (22) tries to get away from Lompoc's Johnny Manzo and Toa Taua during the Oct. 21, 2016 showdown between the two undefeated teams. 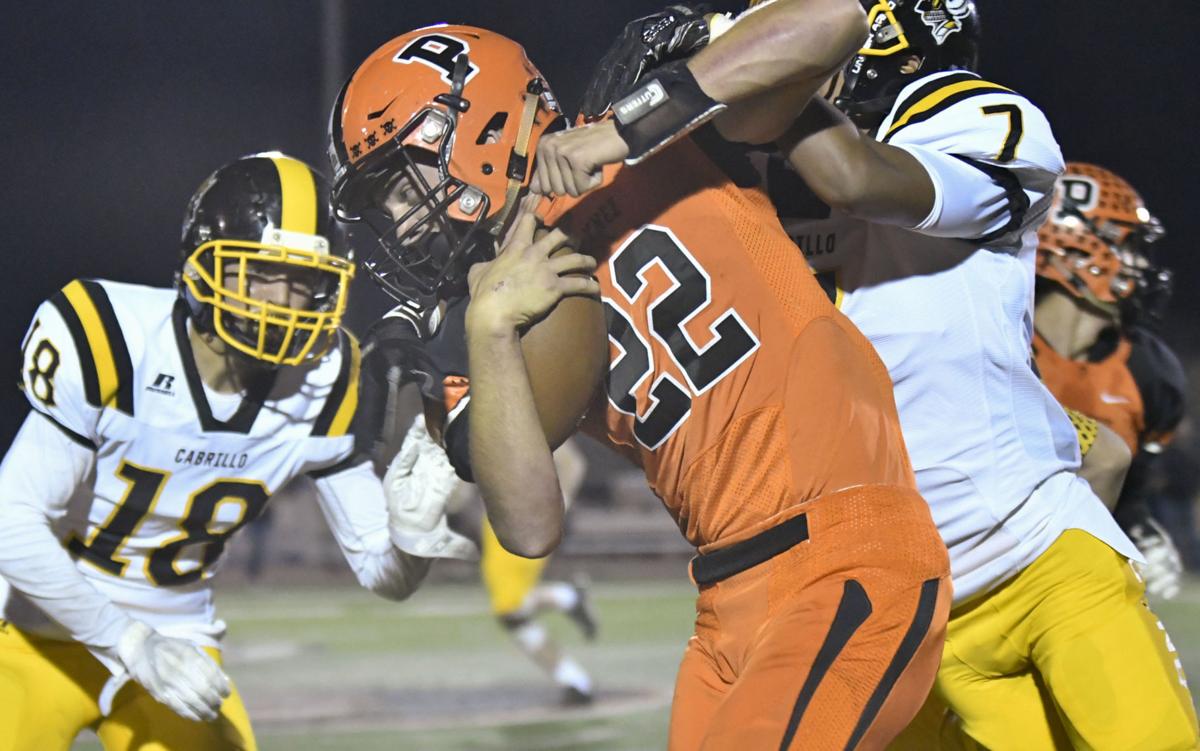 Santa Ynez' Travis Vreeland tries to shake off Cabrillo's Jordan Green, right, and Justin Palato, after catching a pass during a 2017 game. 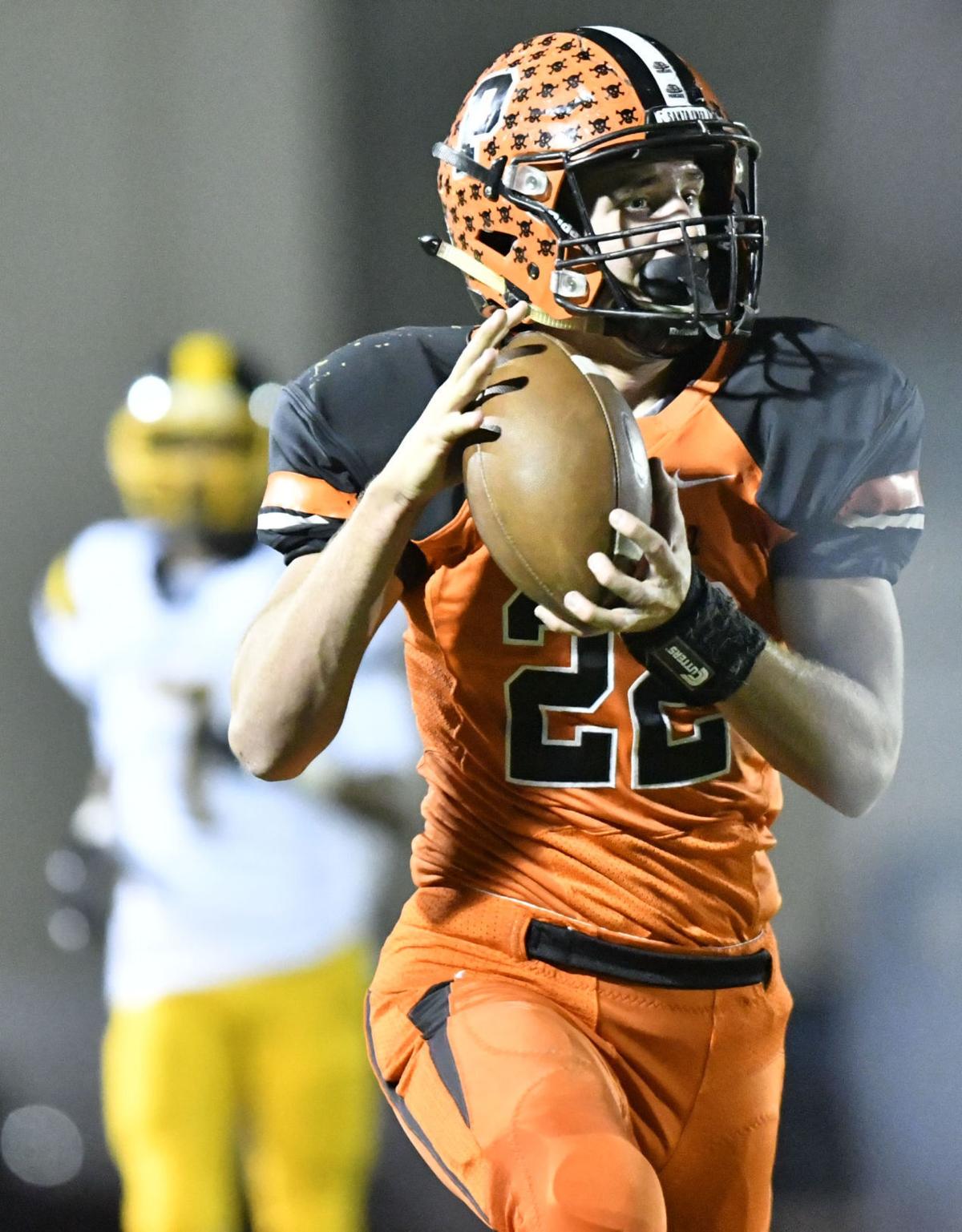 Santa Ynez' Travis Vreeland catches a pass and runs for a touchdown against Cabrillo during a game in 2017.

Travis Vreeland pulled off a rare feat during his Santa Ynez football career.

Vreeland, a three-year starter at linebacker, topped 100 total tackles in three straight seasons, doing so in 29 games from 2015 to 2017.

Vreeland recorded 109 tackles as a sophomore in 2015, then added 115 total tackles the following year before closing out his varsity career with a 106-tackle effort as a senior in 2017.

For his career, Vreeland compiled 336 total tackles, leading the Santa Ynez defense for much of his tenure. He didn't stop on that side of the ball -- Vreeland turned himself into a valuable offensive target as well.

After just catching one pass in his first varsity season, Vreeland caught 22 passes for 289 yards and five touchdowns as a junior in 2016.

The following year, as a senior in 2017, Vreeland upped his totals to 25 catches for 484 yards and seven more scores, averaging nearly 20 yards a catch. Not bad for a 6-foot-1, 210-pound linebacker who also was seen more as a blocking tight end.

One of Vreeland's most memorable games as a Pirate came in October of 2017. The unbeaten Pirates played at Lompoc and Vreeland finished the night with 25 total tackles in a 17-7 defeat, one of the toughest league games Lompoc played during its time in the Los Padres League. Vreeland also caught a team-high four passes for 56 yards that night.

During the end of his high school career, Vreeland went on a tackling tear. He had 13 tackles in a bitter 20-14 loss to St. Joseph that knocked the Pirates out of playoff contention. He had 12 stops in a 42-10 LPL win over Pioneer Valley after he had 25 tackles vs. Lompoc. Vreeland also had a 17-tackle game in a 49-12 win over Santa Maria. As a junior in 2016, Vreeland had a 21-tackle game against Pioneer Valley.

He finished his career with 776 receiving yards and 12 touchdowns.

Vreeland did not continue playing football after his prep career came to a close in 2017. Vreeland also played baseball and some basketball during his time with the Pirates. He was named a First Team All-Area linebacker as a junior in 2016 and earned Second Team All-Area honors as a senior.

Vreeland enlisted in the Marine Corps. in 2018.

Vreeland's career at Santa Ynez is being highlighted as part of our "The Other Guys" series, which aims to feature standout football players who may have been overlooked during their careers. Submissions for athletes to be featured as part of the series can be sent to the author.

Nipomo and Arroyo Grande high school student-athletes began voluntary on-campus workouts Oct. 5. This week, the athletes were finally able to use some athletic equipment. But they could never, under any circumstance, share that equipment with a teammate.

From the Vault: Duane Solomon went from a basketball dream to Olympic reality

Before Solomon would go on to win a state title at Cabrillo High, run for USC in college and finish fourth in the 800-meter Olympic final in 2012, Solomon was a standout basketball player in Lompoc's youth league at the Boys and Girls Club.

Santa Ynez' Travis Vreeland (22) tries to get away from Lompoc's Johnny Manzo and Toa Taua during the Oct. 21, 2016 showdown between the two undefeated teams.

Santa Ynez' Travis Vreeland tries to shake off Cabrillo's Jordan Green, right, and Justin Palato, after catching a pass during a 2017 game.

Santa Ynez' Travis Vreeland catches a pass and runs for a touchdown against Cabrillo during a game in 2017.