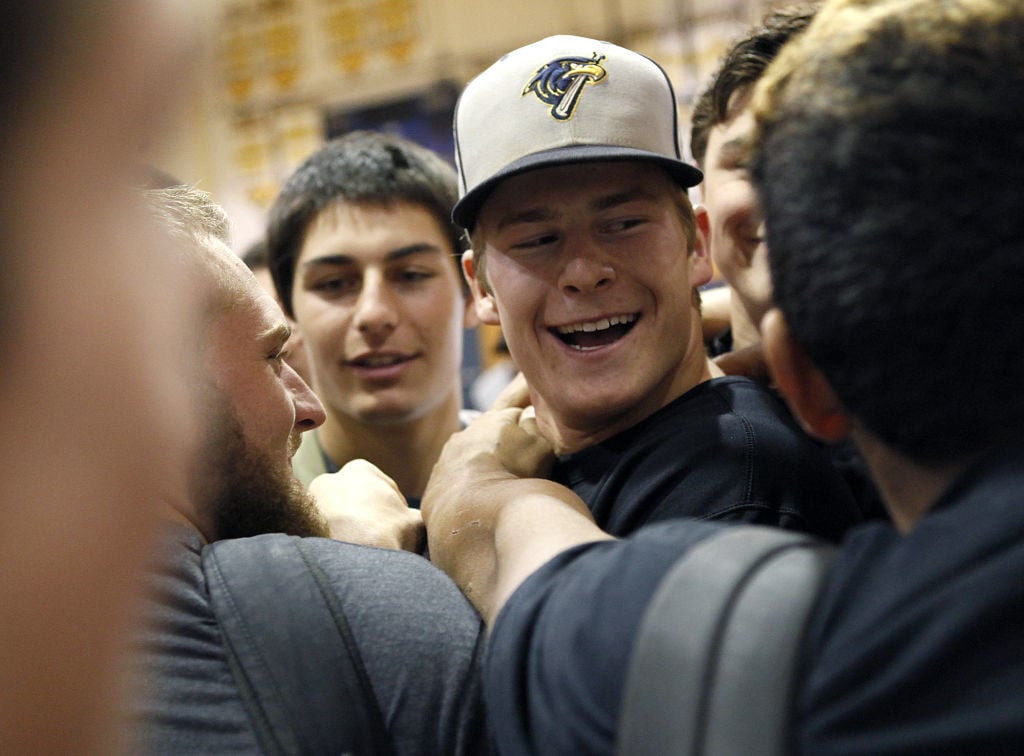 Arroyo Grande baseball player Ryan Teixeira smiles as he is hugged by friends and teammates before signing a letter of intent to play at Colorado Mesa University during a ceremony held at Arroyo Grande High School in November of 2014. 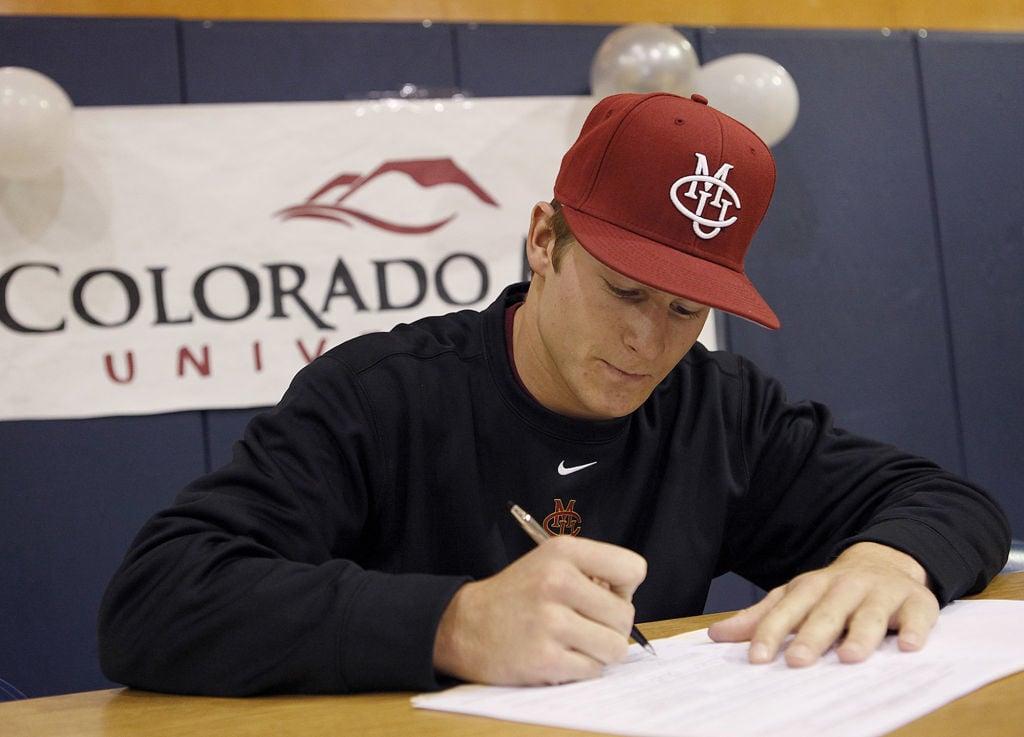 Arroyo Grande senior Ryan Teixeira signs a letter of intent to play baseball at Colorado Mesa University during a ceremony held at Arroyo Grande High School in 2014. Teixeira batted .438 as a junior for the Eagles. 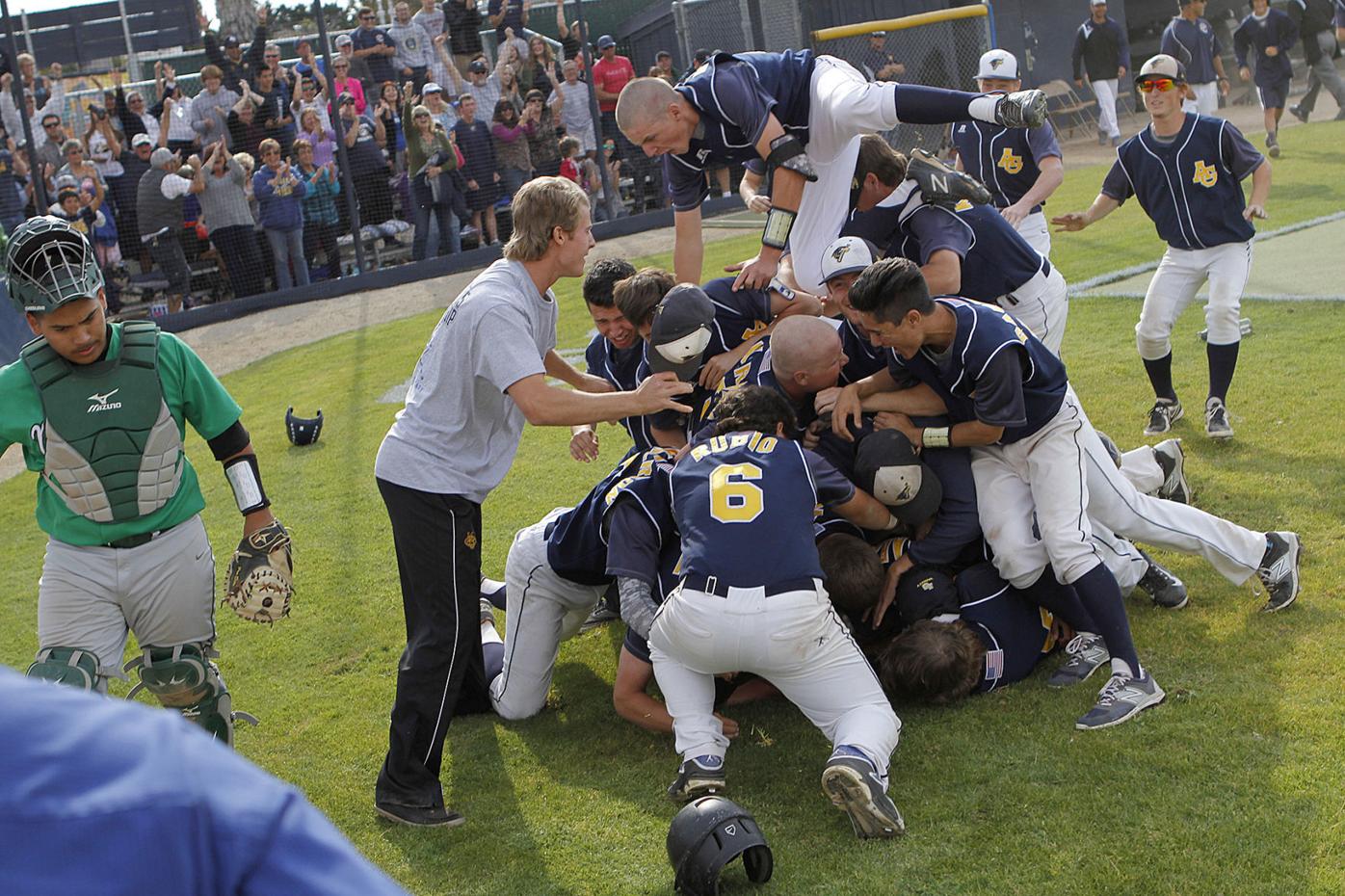 The Arroyo Grande High baseball team celebrates after defeating Nogales in extra innings in May of 2015 in the first round of the CIF Southern Section Division 3 playoffs. 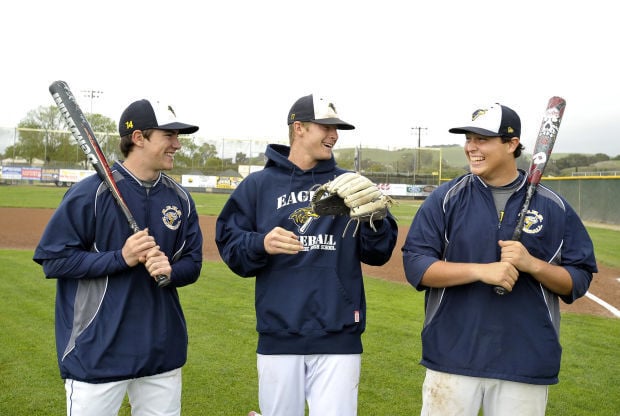 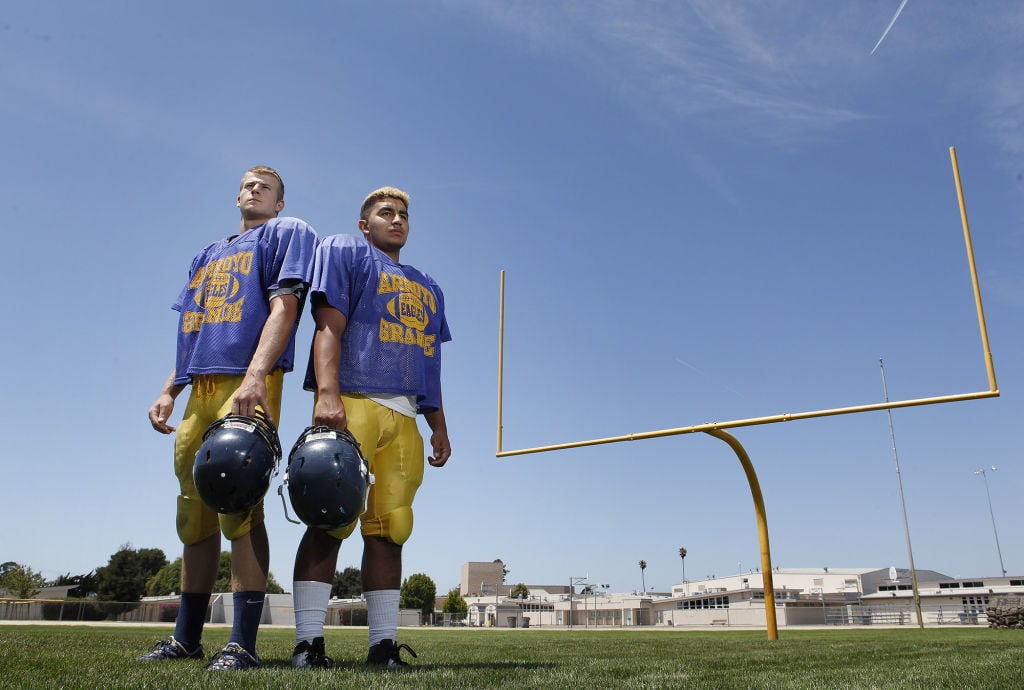 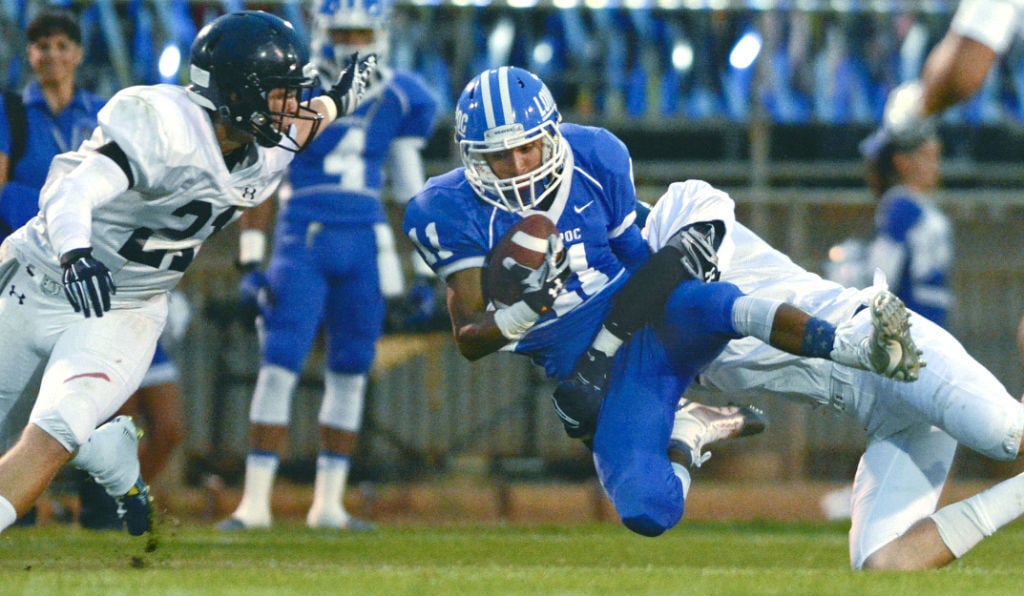 Lompoc's Richard Foster catches a pass under pressure from Arroyo Grande's Jordan Harrigan, left, and Ryan Teixeira during the Aug. 29, 2014 game at Huyck Stadium in Lompoc.

Arroyo Grande baseball player Ryan Teixeira smiles as he is hugged by friends and teammates before signing a letter of intent to play at Colorado Mesa University during a ceremony held at Arroyo Grande High School in November of 2014.

Arroyo Grande senior Ryan Teixeira signs a letter of intent to play baseball at Colorado Mesa University during a ceremony held at Arroyo Grande High School in 2014. Teixeira batted .438 as a junior for the Eagles.

The Arroyo Grande High baseball team celebrates after defeating Nogales in extra innings in May of 2015 in the first round of the CIF Southern Section Division 3 playoffs.

Lompoc's Richard Foster catches a pass under pressure from Arroyo Grande's Jordan Harrigan, left, and Ryan Teixeira during the Aug. 29, 2014 game at Huyck Stadium in Lompoc.

The Santa Maria Times is highlighting Central Coast residents who have made an impact in the athletic world. Today, we look at the life of Ryan Teixeira, a standout infielder and linebacker from Arroyo Grande High, who left a legacy of optimism and strength after his years-long battle with two forms of cancer ended with his passing in 2017.

Though it's been 3 1/2 years since his passing, there are still signs of Ryan Teixeira's legacy throughout the Central Coast.

It may be a 17 Strong sticker on a car at the grocery store parking lot or a neighbor wearing a 17 Strong hat, but signs of Teixeira's impact usually aren't too far off.

His most lasting effects can be found within his 17 Strong Foundation. The charitable organization founded by the late Teixeira aims to give people something he never got.

Teixeira was a star linebacker on the Arroyo Grande High football team set to graduate in 2015. But his top sport was baseball. (He wore the No. 17 in both).

Teixeira, an infielder with good hands and a heavy bat, signed to play college baseball with Division II power Colorado Mesa in November of 2014.

However, five months after signing with the Mavericks, he was diagnosed with Ewing’s Sarcoma as an 18-year-old.

Teixeira fought through the treatment and a major surgery to eventually enroll at CMU to fulfill his baseball scholarship.

Teixeira always looked forward to playing for the Mavericks.

"Absolutely great winning tradition, it feels like a great fit. Plus, we can go hunting and fishing on the weekends, hang out with my best friend (Garrett Ball)," Teixeira said at his signing ceremony in 2014. "It's great baseball, too. It's a very baseball-oriented school. From everyone I heard from, they absolutely love it there."

Less than a year after beating cancer the first time, however, Teixeira was diagnosed again, this time with a related form of cancer: Acute Myeloid Leukemia.

After a five-month stay in the hospital, the aggressive disease took his life on March 4, 2017, ending a two-year battle with two different types of cancer.

Players and coaches at Colorado Mesa fully supported Teixeira's battle. Days after Teixeira died in 2017, the team put Teixeira's name in the lineup with him playing third base and batting third. Teixeira's baseball profile at CMU lists the game as his only start with the Mavericks.

"Through it all, he never lost his sense of humor," Ryan's father Steve said at a celebration of life for Ryan in 2017. "Ryan reached more people in 20 years than some people reach in 80."

Due to Teixeira's age at the time of his initial diagnosis, he didn't qualify for a gift from the Make-A-Wish Foundation, which fulfills wishes of terminally ill patients up to 17 years of age.

Teixeira's family formed the 17 Strong foundation in response. The non-profit charity's goal is to fund 'Victory Trips' for young adults diagnosed with cancer and are too old for Make-A-Wish.

The group raised enough money to fund three Victory Trips within six months of its founding in 2017. In about three years, the group has funded 35 Victory Trips, sending recipients to 15 countries.

The celebration of life for Teixeira was held at Arroyo Grande High's football stadium as hundreds of guests attended, including members of the CMU baseball team who were on their way to Point Loma for a game. Dozens of former Arroyo Grande High teammates and classmates attended the ceremony.

Last year, the Friends of Ryan Teixeira (FORT) was formed by Tyler Auerbach, a friend and former teammate of Teixeira. That organization has held baseball fundraisers in Teixeira's honor.

After months of cancellations, Altheide was finally able to celebrate a bit. She certainly deserved it.

Bailey: College football is likely canceled this year. Will the NFL follow suit?

There are foundational differences among the two and, even as the college football season is almost certainly getting canceled, that does not mean there won't be NFL football this fall.

The people have spoken: Nipomo's Nick Kimball voted Player of the Decade after edging Mike McCoy in wild finale

That winner is Nick Kimball. The former Nipomo High standout has been voted the Player of the Decade.

They both became members of the CIF Fall All-Century Team. Kaufman was selected for his 1990 football season at Lompoc High School. Hasay was tabbed for her 2008 cross country season at Mission Prep.

From the Vault: Eddie Johnson starred as a Saint and a Ute

Here's what legendary coach Barney Eames had to say about Johnson as a youngster in 1982: "There's no doubt about it, Eddie's got a lot of potential," Eames told then Times sports writer Joe Dana. "He's definitely a dimension above the average high school back."

Cal Poly did not play any football games in 1918 due to the flu epidemic and in 1930 because of a polio epidemic, according to the school. The Mustangs also did not play any games in 1943 and 1944 due to World War II. In 2001, Cal Poly's game at Saint Mary's was postponed because of the events of 9/11. It was made up at the end of the regular season.

“I also received a few other scholarships to go to Tiffin,” including a 2020 President Scholarship, worth $13,000, because of her academic marks at Santa Maria, said Baez.

Player of the Decade: Two-time All-Area MVP Erin Jenkins will go down as one of the greats

Jenkins was named the Times' All-Area MVP in 2017 and 2018, after her junior and senior years at Cabrillo High. Aly Beebe (2010 and '11) and Meghan Gnekow (2001 and '02) are the only other two players to do that this century. Both Beebe and Gnekow went on to sign with Pac-12 schools, Beebe joining Stanford and Gnekow playing for USC.

One of the most irritating aspects of this game (besides the TV blackouts, labor disputes and overpriced hot dogs and parking), are the 'unwritten rules' that I hear so much about. (Also, if these rules are so important, why don't you all write them down?)

As a young coach, Reck took over the Santa Ynez girls basketball program in 1976. The ENTIRE program.

“I was the girls varsity and junior varsity coach,” Reck told the Times’ Joe Bailey before being inducted into Santa Barbara's Court of Champions in 2016.

Tickets can be purchased through Saturday, Nov. 7.