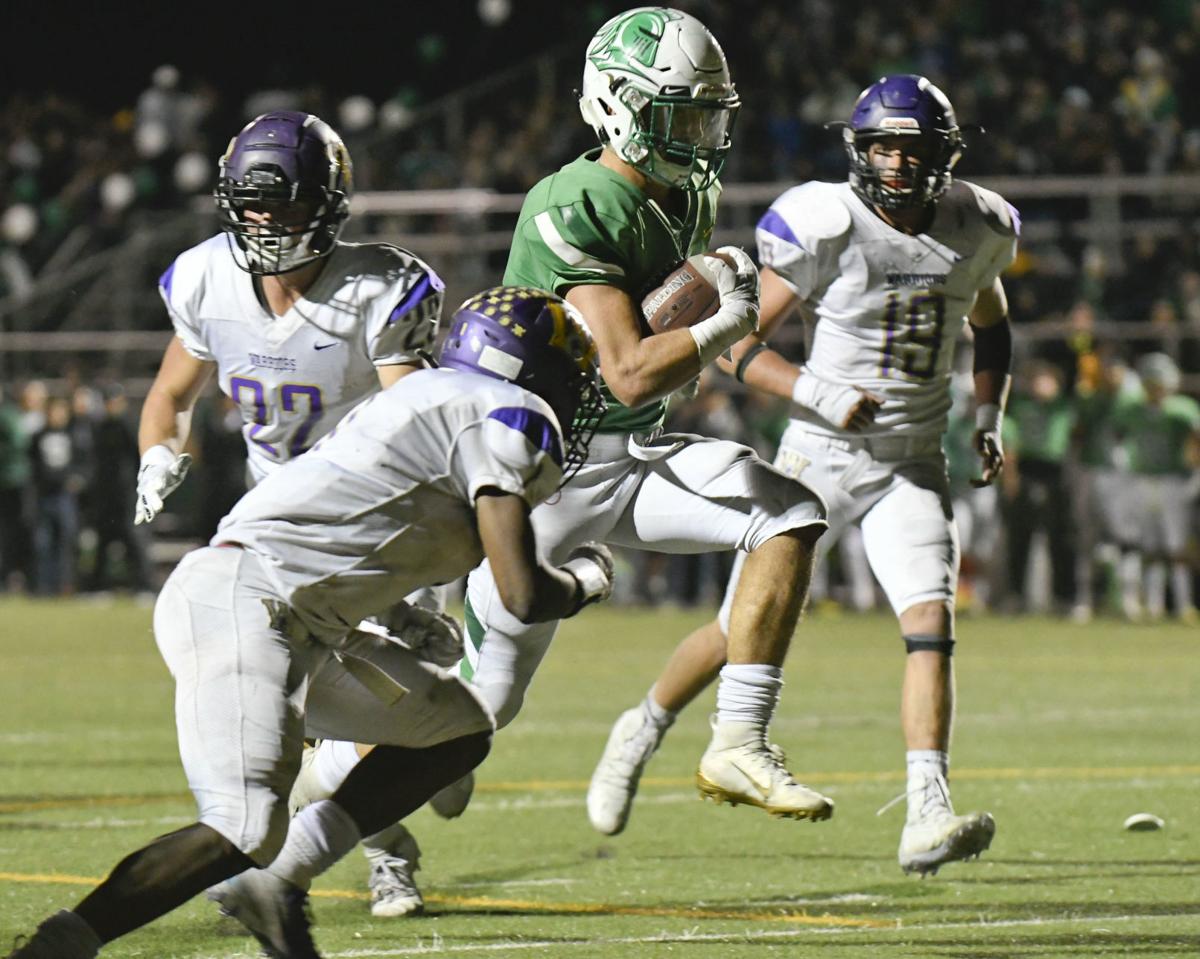 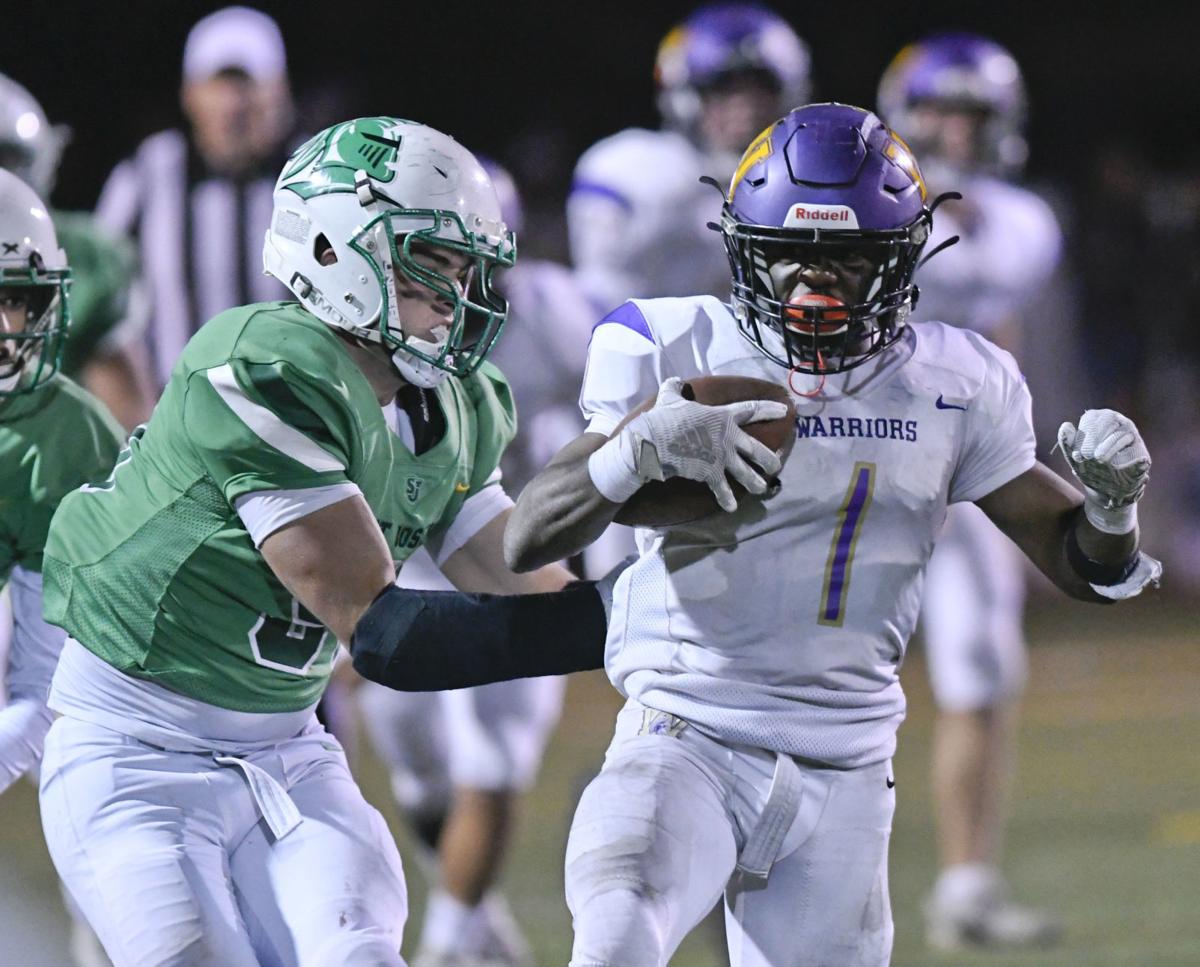 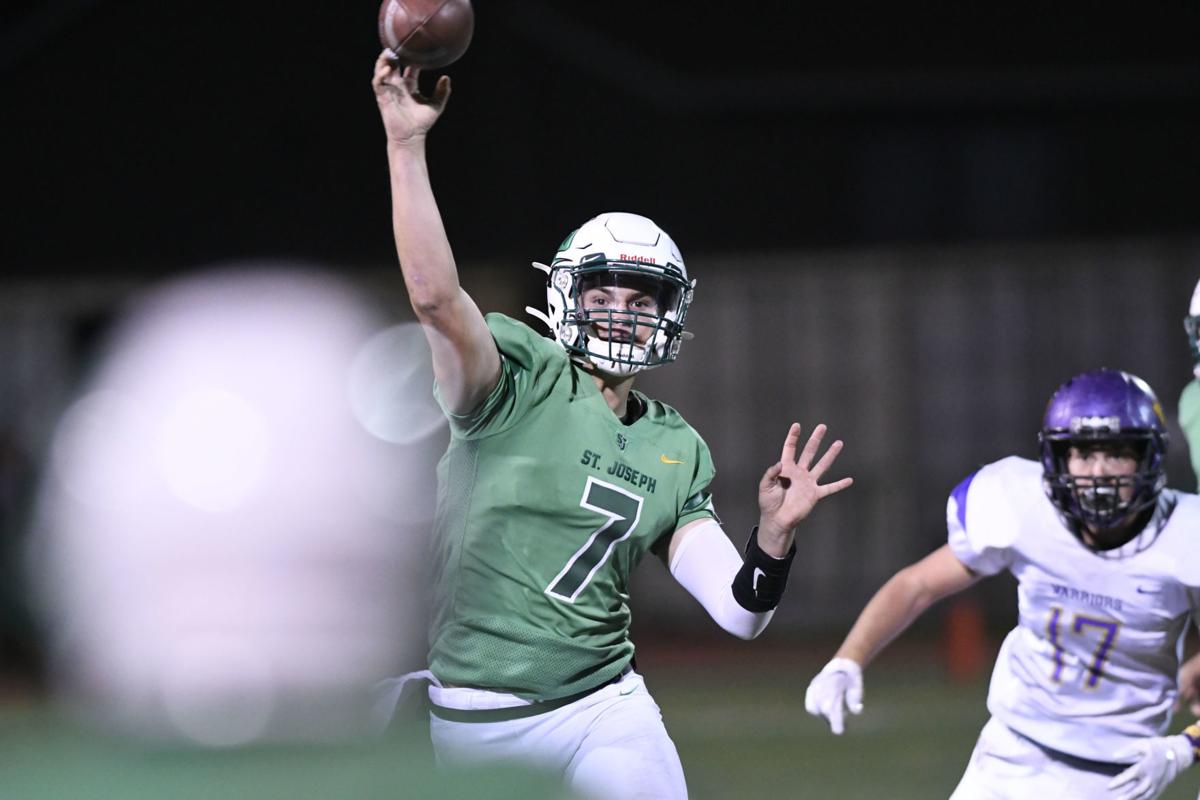 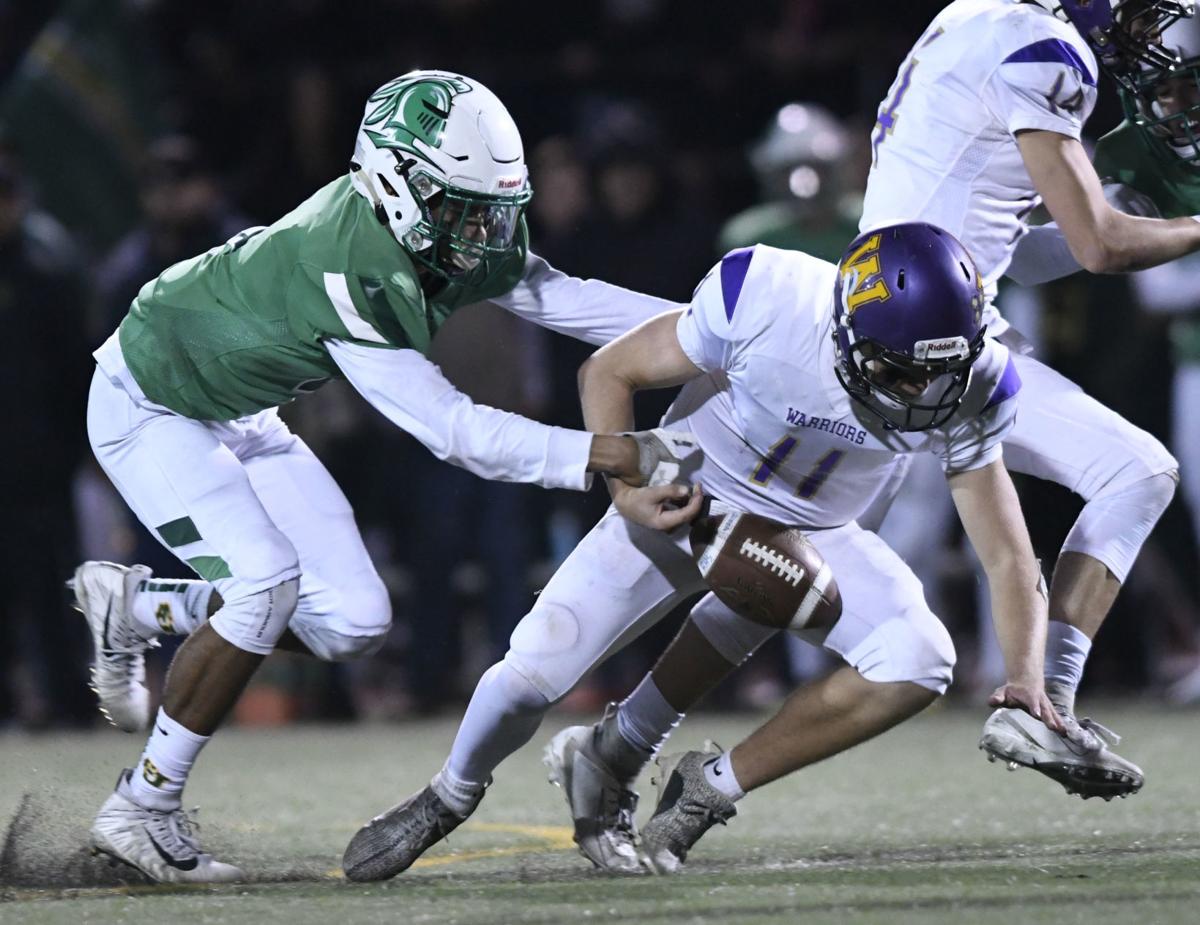 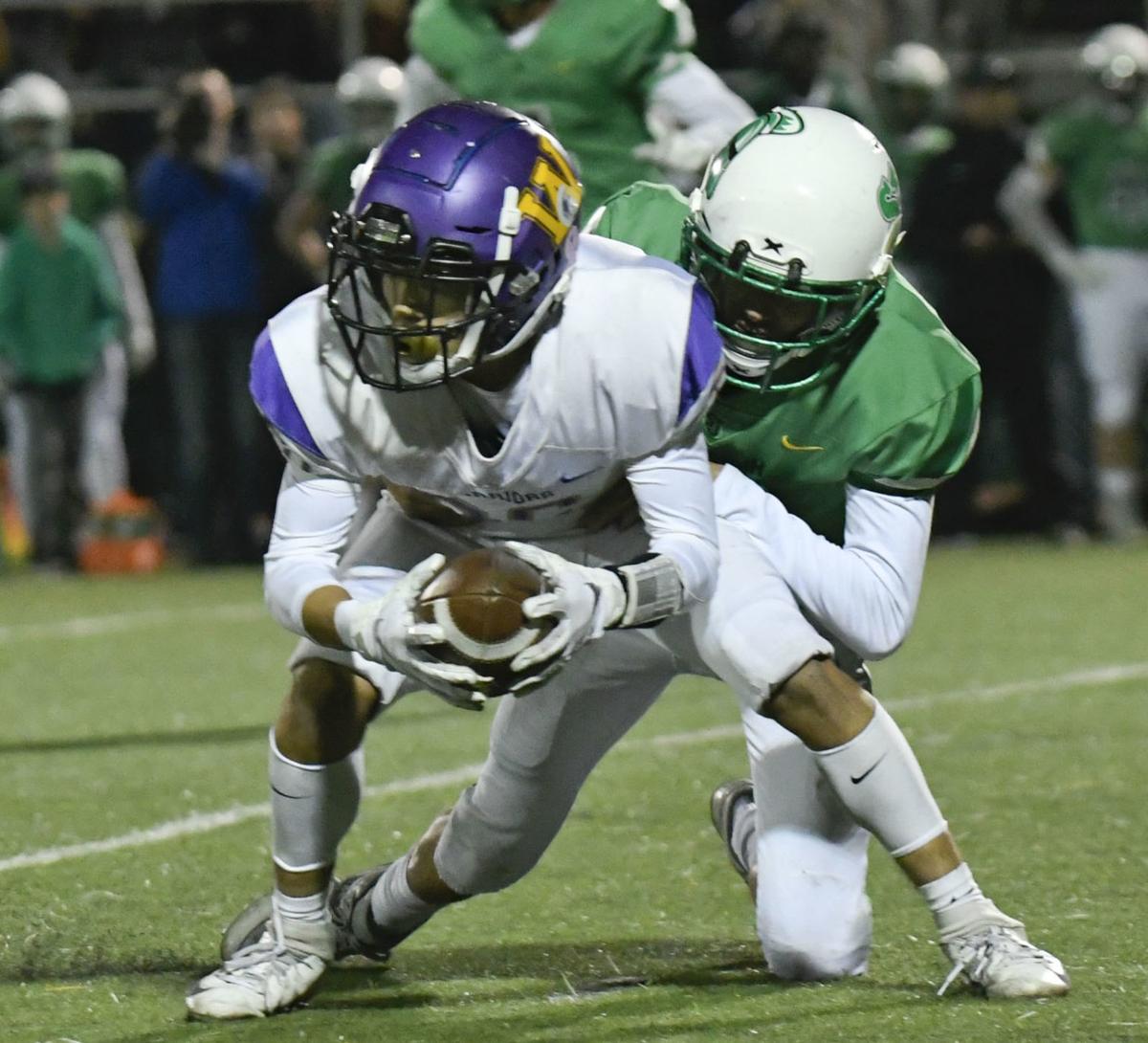 It wasn't always pretty, but the Knights got it done.

St. Joseph used an aggressive, stifling defense to beat rival Righetti 22-7 with a gritty performance Friday night in the game known simply as the 'Battle for the Shield.'

The Knights have won five straight over their rival Warriors and enter the playoffs riding a five-game win streak.

What's more, the Knights are Mountain League champions in back-to-back seasons, taking both titles with decisive victories over Righetti.

St. Joseph finishes the regular season with a 7-3 overall record after going 3-0 in the Mountain League. Righetti is also 7-3 overall, going 2-1 in league.

Just over a month ago, it looked unlikely that the Knights would be here standing with the league crown.

But they reeled off five straight wins. On Sept. 27, the Knights were 2-3 after suffering a 28-14 home loss to Lompoc. They haven't lost since.

Righetti is headed in the opposite direction. The Warriors started the season with six straight wins, but close out the year with three losses in four games.

The skid for the Warriors has coincided with the injury to star receiver/defensive back Jake Steels, who injured his ankle in the Dos Pueblos game last month. Steels suited up Friday, but didn't make an appearance in the game.

St. Joseph used its defense to smother the Righetti offense. Tyler Williams, a junior defensive back, made the game's first big play, intercepting a Righetti pass and returning it to the Warrior 11.

St. Joseph capitalized on the play with a four-yard touchdown pass from Hunter Barnhart to Noe Carlos, a defensive end used rarely on offense, on fourth down.

"It was a great feeling getting the offense on the field and it felt like they were on the field for awhile. I got the pick and put the offense in prime position to make plays and they did that," Williams said of his interception.

The Warriors responded though, with a 65-yard drive punctuated by Logan Mortensen's touchdown pass to Diego Macias for 13 yards.

The game was tied 7-7 at halftime.

But the Knights dominated the second half.

Galassi is 5-foot-6, 195 pounds, not exactly metrics associated with a defensive lineman.

"I used to play slot (receiver) and I try to use my speed to my advantage and get my positioning good and use my hands," Galassi said. "I do that every day with my teammates. We constantly work hours on end and it constantly pays off. Once you start getting the repetition it feels natural."

Tyler Williams got the Knights going in the first half with his big INT returned to the Righetti 11. Set up the game’s first TD. #santamariatimes pic.twitter.com/JU1EyKqou2

Devin Guggia scored two second-half touchdowns for the Knights. Noah Skarda, the holder on place kicks, picked up a bobbled snap and ran around the right end to score a two-point conversion that put the Knights up 15-7.

Guggia then scored in the fourth quarter to put the game away.

The game was a testy one. Righetti was called for numerous personal fouls and penalties throughout proved disastrous for the Warriors. Twice holding calls negated first downs and another time a long pass play.

Righetti lost one fumble, which was caused by a strip from Williams, in addition to Williams' interception. St. Joseph also fumbled once and missed a short field goal try, but was able to overcome.

Bryce Cofield, the Spartans' quarterback, rushed for 155 yards on seven carries with 2 touchdowns and two sacks on defense.

Cooper Wood added 71 rushing yards and a touchdown for the Spartans as Winston Harris carried the ball three times for 20 yards.

Connor Adams caught a 51-yard touchdown from Sutton. Cameron Carpenter led the OAHS defense with nine tackles a fumble recovery. Noah Nickell had two tackles and an interception on defense.

The road is ready. But who will make it to their desired destination? That's the question now.

St. Joseph football: Knights are on a roll after 'trusting the process'

🏈 Friday Football Central: Get scores, stats, and videos from the opening round of the high school playoffs here!