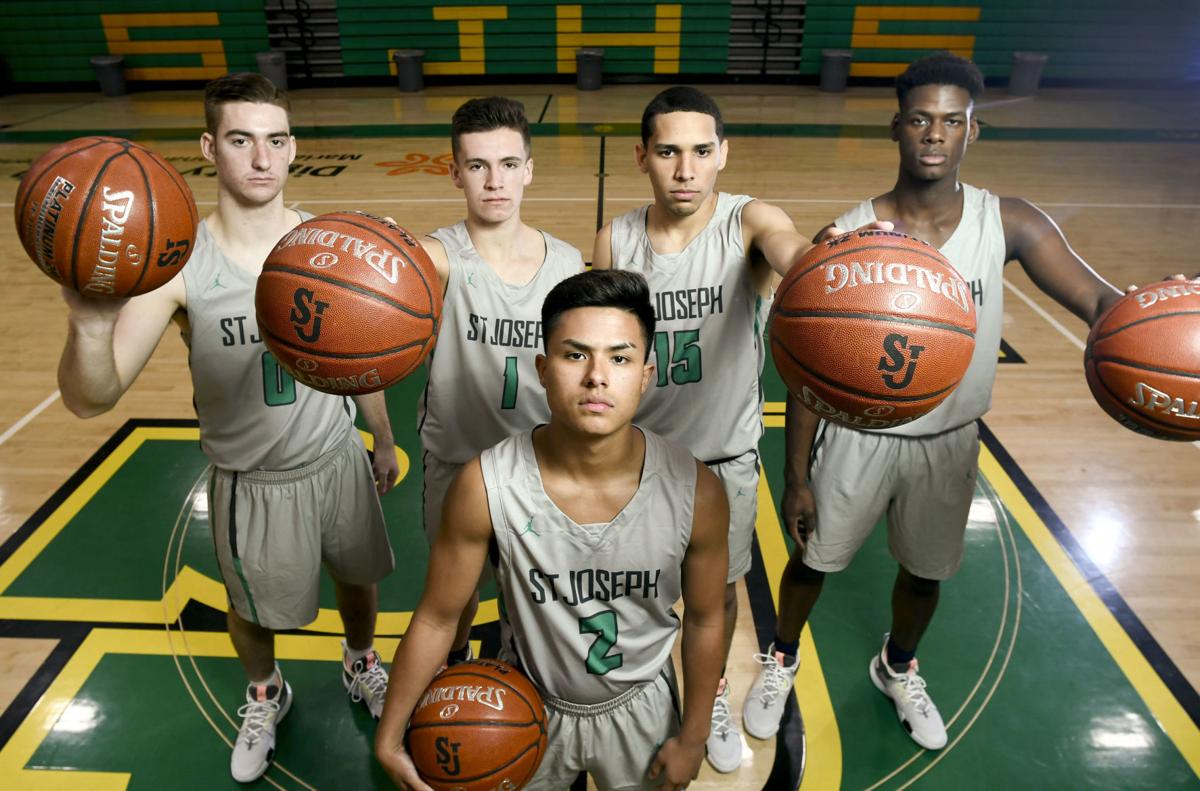 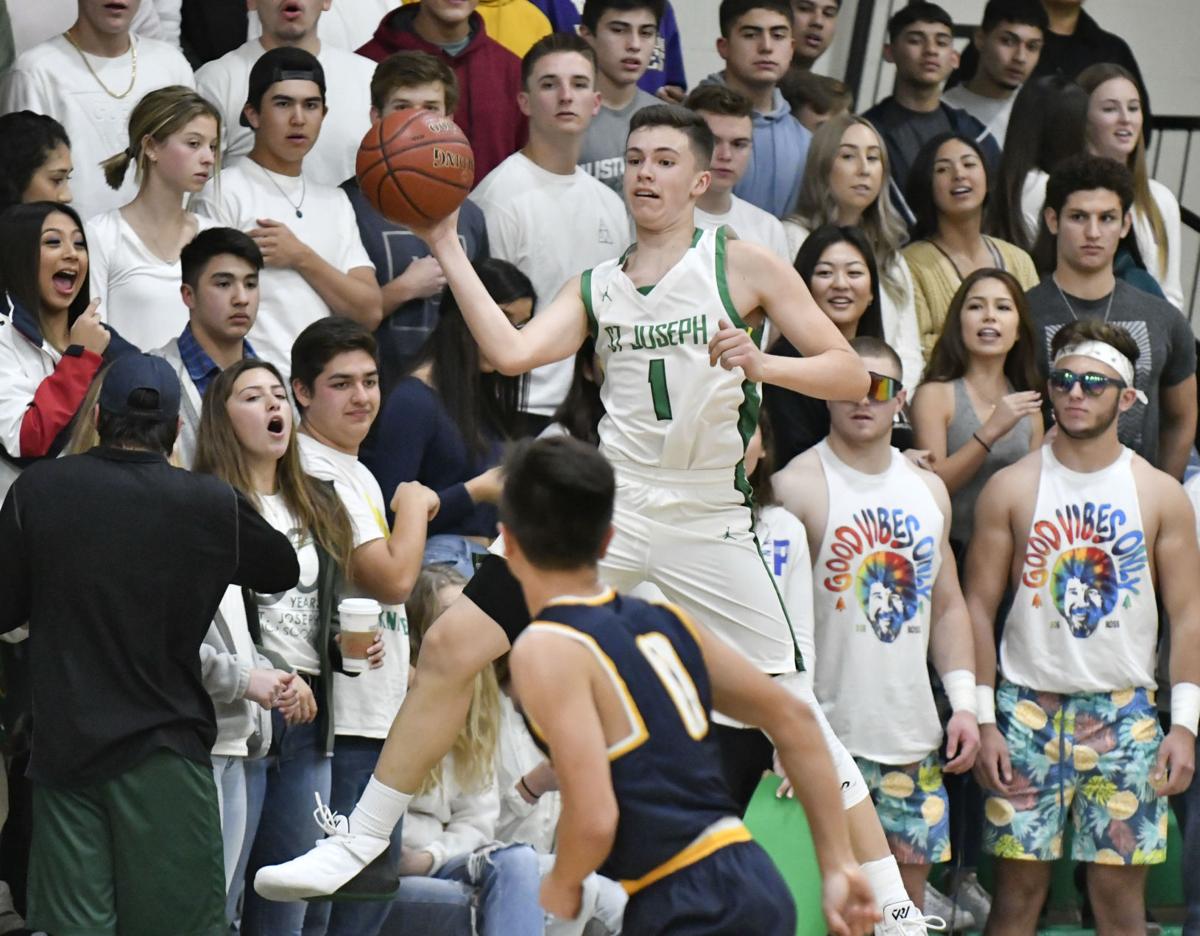 St. Joseph's Steven Vasquez goes into the crowd to save a ball against Arroyo Grande last season. 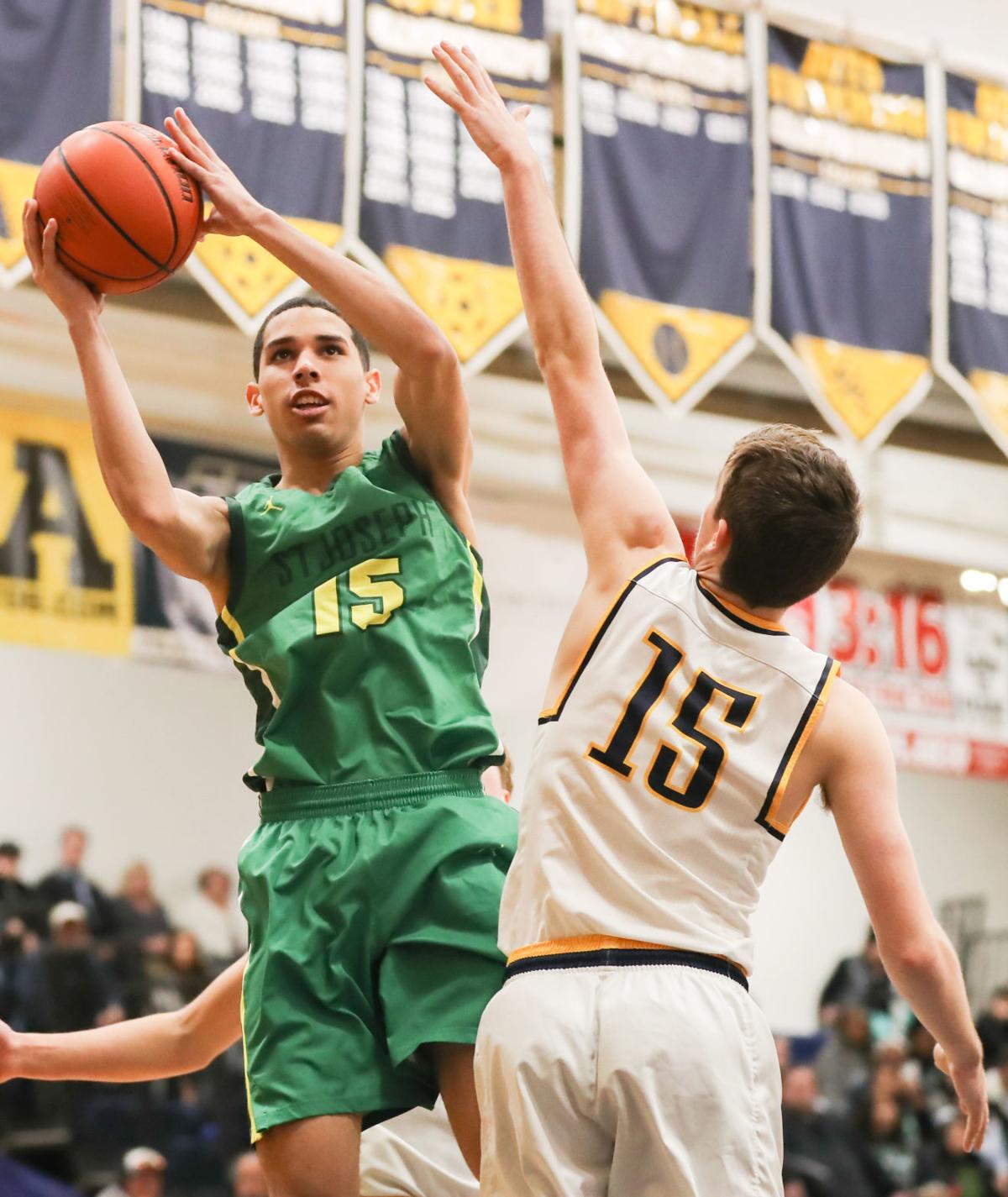 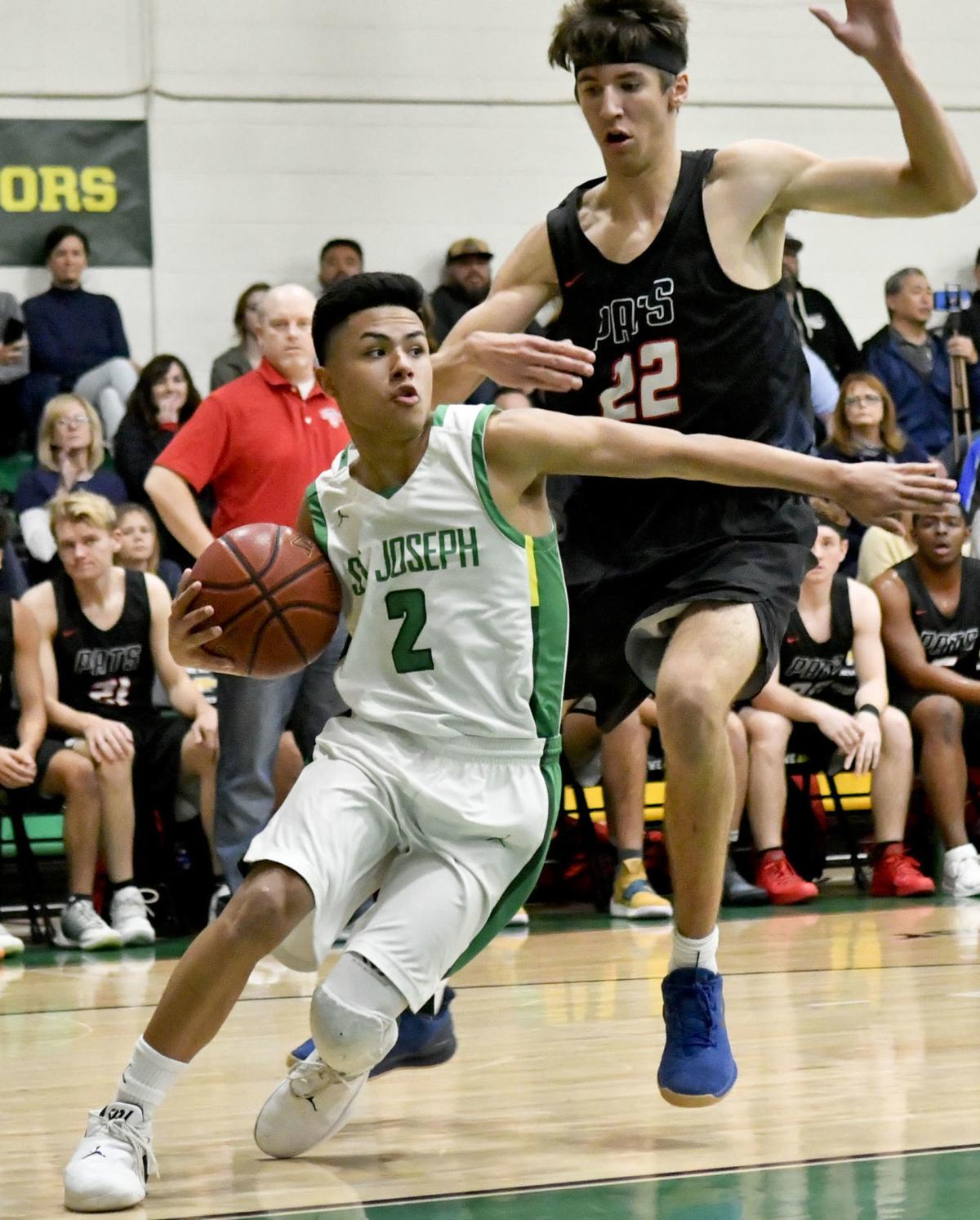 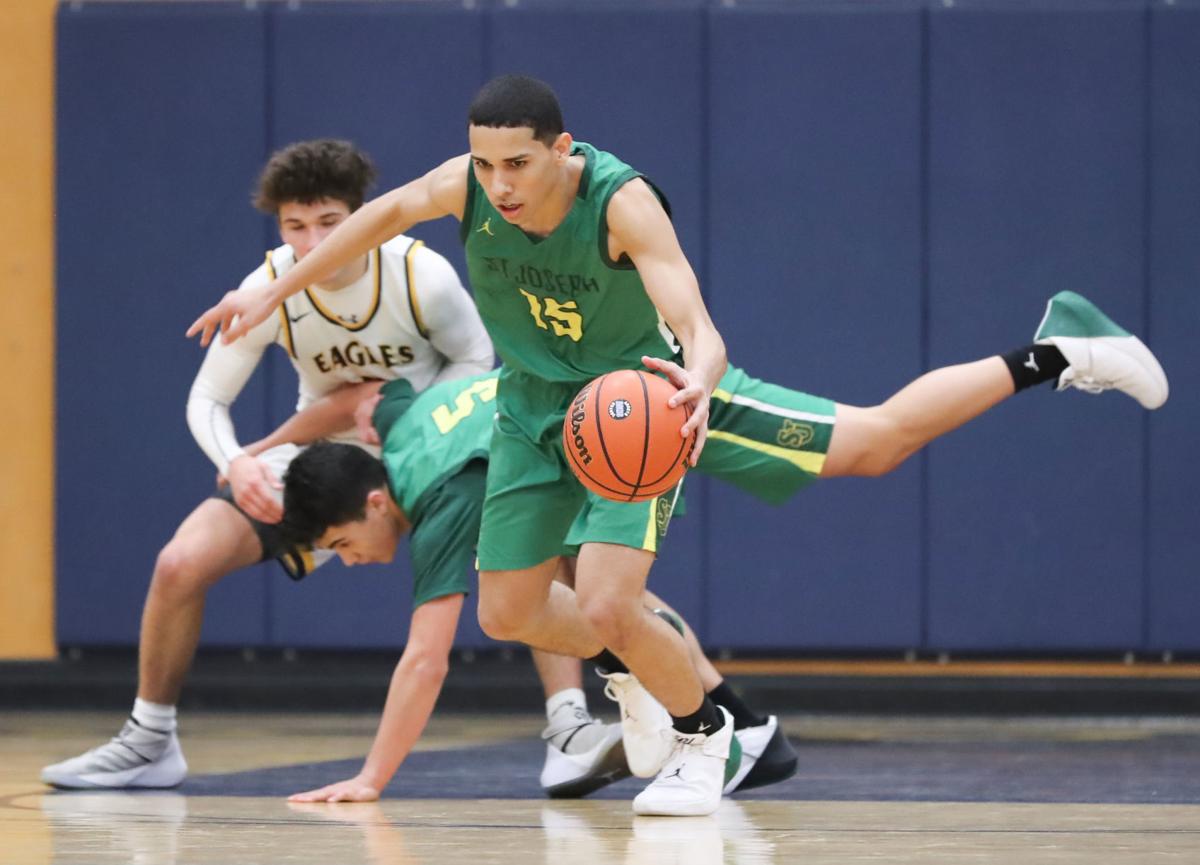 Janelle Rivera (15) picks up a loose ball during a Mountain League match-up at Arroyo Grande last January. Rivera is back with the Knights as a junior. 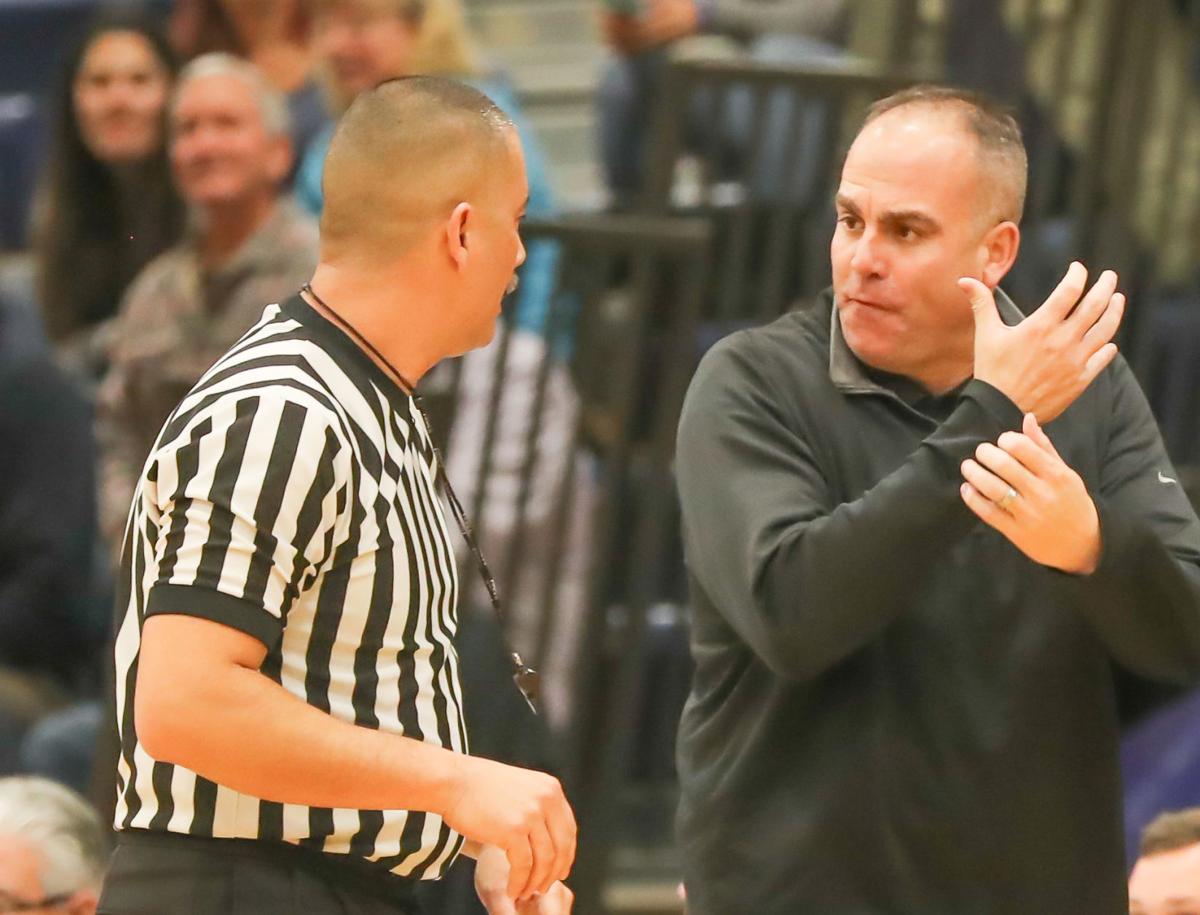 With four returning starters, it would be reasonable if the Knights have higher aspirations this year.

"On any given night, any of our five starters this year could lead us in scoring, and lead us in rebounding as well," said Tom Mott, St. Joseph's veteran boys basketball coach who is also the school's veteran athletic director.

Point guard Angel Ortiz, St. Joseph's leading scorer at 15.2 points a game last year, is one of the returnees. The Knights did lose their second-leading scorer, Kainoa Keuma (14.9 points a game) to graduation.

Senior power forward Tim Noe, who was on the St. Joseph varsity last year, is a starter for Mott this year.

The Knights have some size in their front court. Bazunga is 6-foot-6. Rivera and Noe are both 6-4.

St. Joseph also has decent depth. "We can go nine or 10 players deep in the rotation," said Mott.

Mott has liked to go deep in his rotation in the past, and his teams have also played fast. The veteran St. Joseph coach said it will be the same this year.

Taua and Cooks lead Nevada to bowl eligibility once again

Growing up on the Central Coast, Elijah Cooks and Toa Taua did a little bit of everything playing in the various youth football circuits.

The Knights have six juniors on their roster. They have one freshman, 6-5, 240-pound Caeden Hamilton.

This season, the Knights figure to have the shooters who can pop in the outside shot with regularity and they figure to have enough talent inside that they can go there if they wish.

St. Joseph lost in the quarterfinals of the CIF Central Section Division 1 playoffs last year. The Knights are in Division 1 this year.

"Division 1 is where we want to be," said Mott.

The Knights have played in out-of-state pre-season tournaments in the past, and they will do so again.

A St. Joseph girls basketball team with a mixture of youth and experience will try to do big things in its new league.

"We'll play in the Vegas Tournament," that begins the day after New Year's, said Mott.

The Knights are also scheduled to play in the Mission Prep Christmas Classic Dec. 19-21 and the Damian Lillard Classic in San Francisco Dec. 26-28. St. Joseph will open its season Dec. 3 at home against crosstown rival Pioneer Valley.

However the Knights fare in the Mountain League this season, they figure to be a cinch to return to the playoffs. There will be 19 Division 1 teams vying for 16 spots.

In the Central Section, any team that does not win a league championship can petition to get into the playoffs.

After three straight runs to the sectional semifinals, the Warriors went out in the first round of the playoffs last year. Now Warrior coach Desiree Hitch is expecting bigger things from her squad this year.

One word that veteran Orcutt Academy boys basketball coach Ryan Smalley hopes will define his squad this season is “versatility.” Smalley said “We have (several) guys who can shoot the 3.”

St. Joseph's Steven Vasquez goes into the crowd to save a ball against Arroyo Grande last season.

Janelle Rivera (15) picks up a loose ball during a Mountain League match-up at Arroyo Grande last January. Rivera is back with the Knights as a junior.