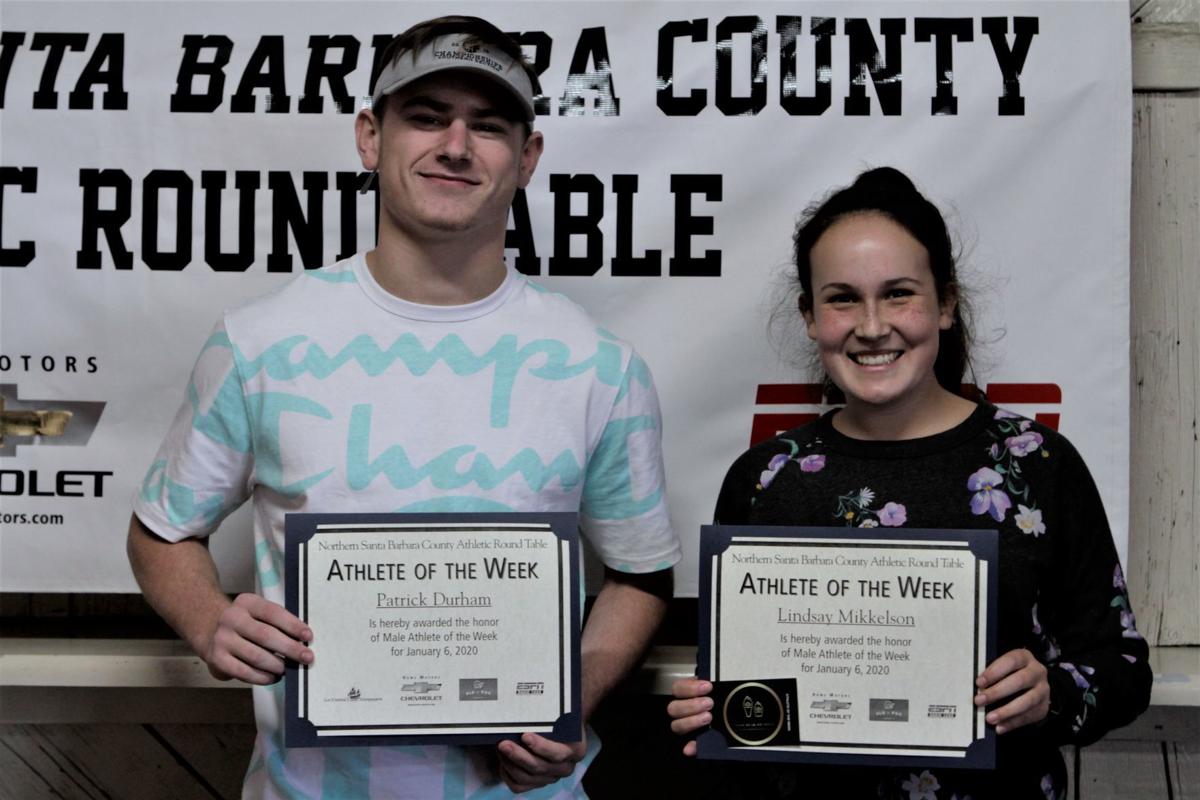 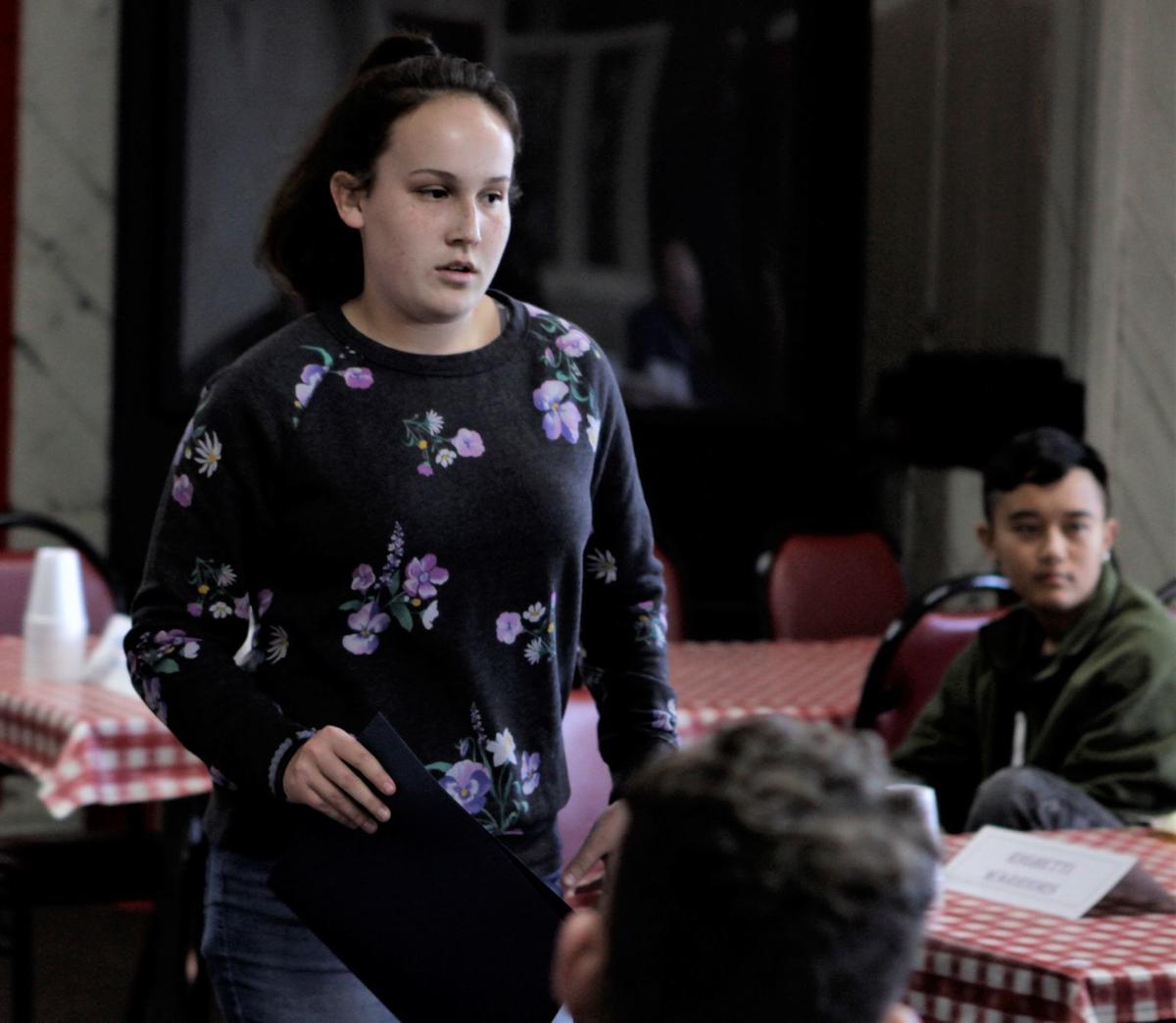 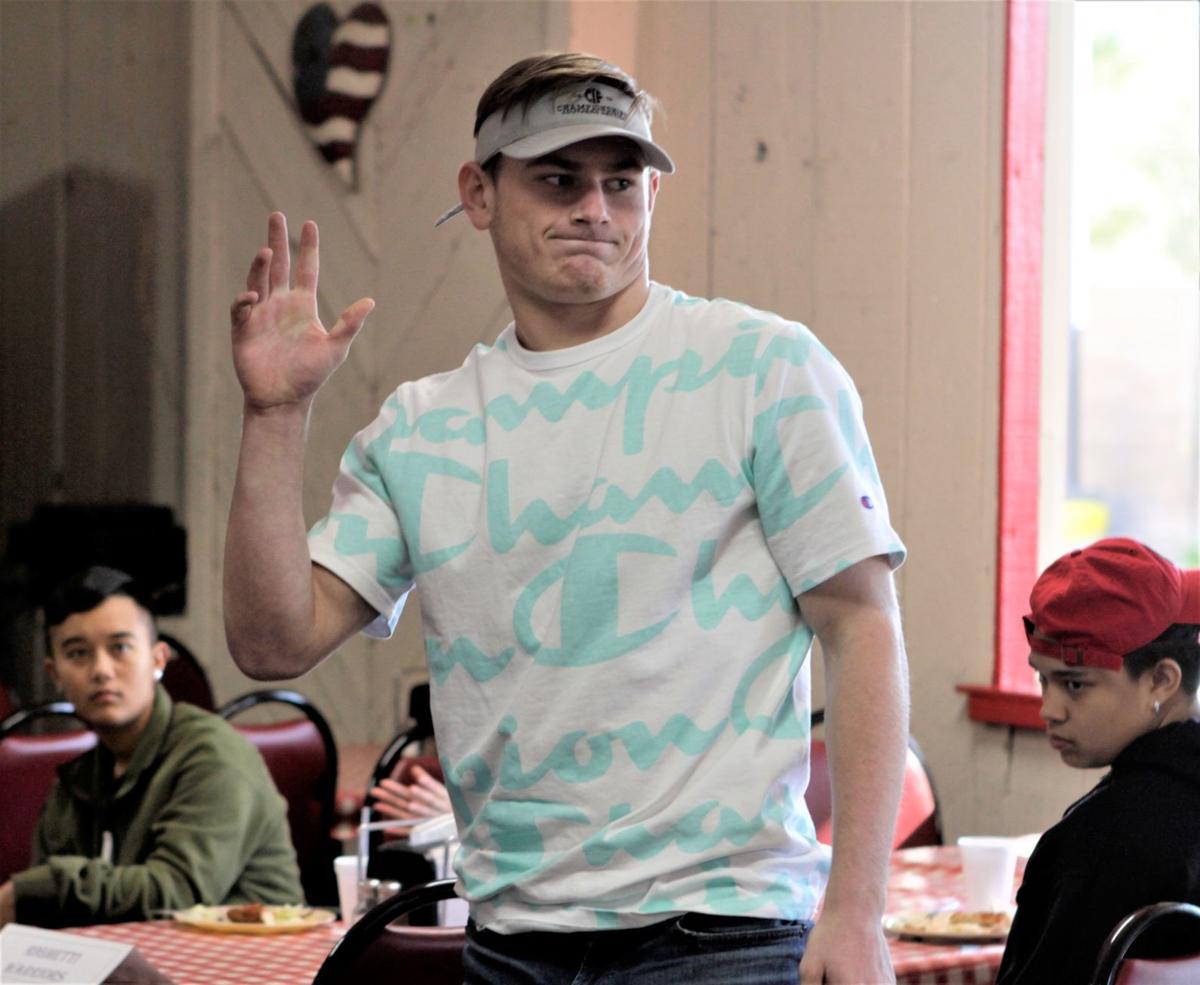 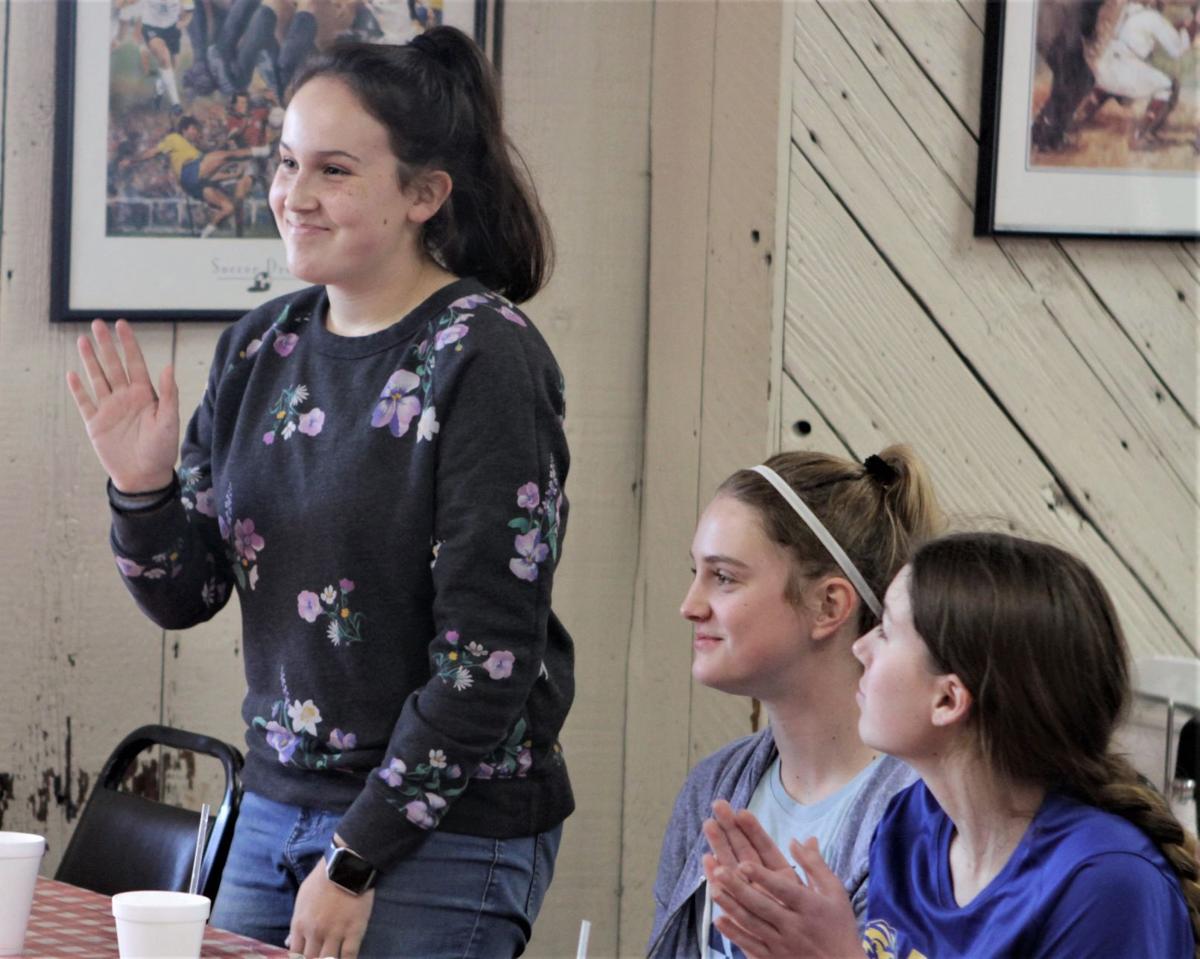 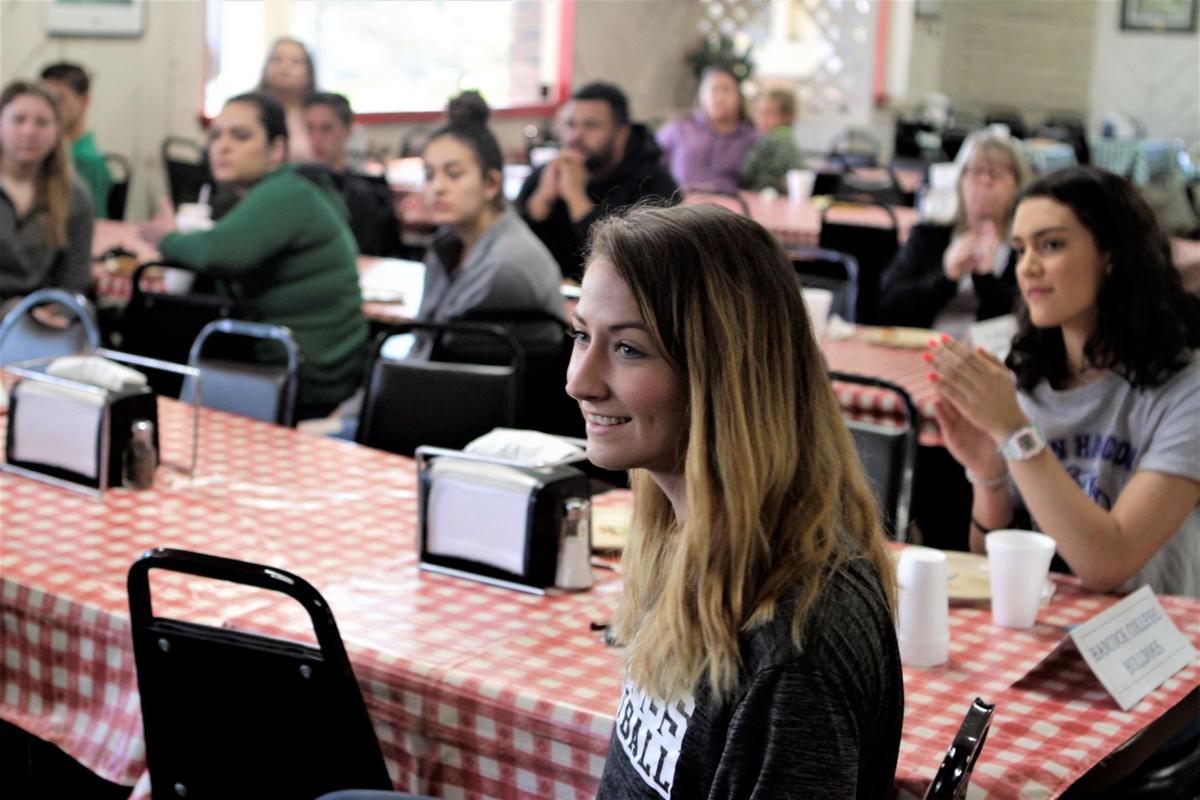 The first Round Table luncheon of the new year featured two first-time Athlete of the Week winners on Monday.

Durham was one of the top linebackers in the area in the fall and transitioned to an upper-weight wrestler in the winter.

He won the Dinuba Invite on Saturday. There he defeated the 12th-ranked wrestler in California at 170 pounds. Durham also took second at 183 pounds during The Bash tournament at Pioneer Valley held the weekend after Christmas.

As other student-athletes chowed down on the pizza provided by Giavanni's in the pizzeria's banquet room on Monday, Durham had to abstain. The senior continually fluctuates from the 182-pound weight class down to 170 for big tournaments.

"In football you get to bulk up and eat whatever you want, but it's harder on your body. In wrestling you can't eat, you've got to watch your weight and you have to cut," Durham said. "It's constant practice, too."

Durham had been to the Round Table luncheon many times before Monday's appearance.

"It's the first time I've ever got the award and I've been coming here since my freshman year," he said. "I'm just happy to be here."

Mikkelson won Most Valuable Player honors at the Lions' own tournament as the sophomore led her team to the tourney title. She averaged 18 points, six rebounds and four steals over her team's three games. Mikkelson poured in 20 points in a 57-50 win over Santa Maria in the tournament championship on Dec. 28.

"It's really cool, it's really cool," Mikkelson said of her Athlete of the Week award. "Especially to beat Santa Maria and do it as a team, do it together. We worked hard and all that hard work really paid off. It's great."

Photos: Durham and Mikkelson earn Athlete of the Week honors at Monday's Round Table

Mikkelson and the Lions, coached by Randy Stanford, head up to Coast Union in Cambria Tuesday night in a big Coast Valley League game. Mikkeslon is confident the Lions can challenge the Broncos.

"Coach calls us 'The Great Eight,'" Mikkelson said. "There aren't many of us - we have a freshman, four sophomores, a junior and two seniors - we're young but it's been really cool to see us work together, especially my class."

Mikkelson's game is built off driving to the hoop and drawing fouls and scoring inside.

"The short corner jumper works for me, too," Mikkelson said.

"Hayley is one of our taller girls and she plays around the hoop a lot," Barrett said. "Our boys soccer team is 3-3-3 and Anthony, a senior, is a midfielder with a couple goals. We don't have a full girls wrestling team, we have four girls and Chloe is an outstanding sophomore. She was the league champ and Masters qualifier last year. Gracen is from a great family of wrestlers. He finished fifth at The Bash and he only has one loss on the season."

"Thea is averaging about four steals a game and shoots 91 percent from the free throw line," West said. "Morgan leads the team in scoring and had 20 points against Adelanto in the tournament last week."

"We're off to a very good start, we picked up some great wins," Nerelli said. "We feature a lineup that returns almost no experience from last year but still we rebound from injuries, we rebound from illness and we find ourselves right in the middle of the playoff race. We don't start conference play until January 22 when we had down to Moorpark."

Gudeman and Morgan are the Bulldogs' captains, though Morgan won't play this year due to a torn labrum. Gudeman is from Nashville, Indiana, and is an Air Force veteran.

"I ran into her in a PE class last year and she was flying all over the court and I knew she could play," Nerelli said. "She's been an outstanding captain and I think the years in the Air Force have had something to do with that. Our kids respect her and follow what she says."

As for Morgan, Nerelli says she's expected to be back on the court next season with the Bulldogs.

"She was all set to have a great year this year. She worked hard all offseason," Nerelli said of Morgan. "She worked all spring, then she tore her labrum, that's an injury she suffered in high school. She played through it last year and was an All-Conference guard. We were looking for big things this year and it just didn't happen. She's getting her year back and will be bigger and stronger next year. With her and our other players we'll be one of the stronger teams in the area."

"We're finally getting Hannah healthy and to where she needs to be and we're looking for big things from her," Stanford said. "Alayna is a sophomore forward and she's been doing a great job for us adding some scoring and rebounding."

"Tanner is a young freshman and has played any position we've asked," Spence said. "He's got a great attitude. Toby is a central defender and has played against big, strong and gifted players and he's never backed down. He's never looked out of place."

Zayda Altheide spoke for the SJHS girls basketball team. Alexis Brackett, another senior, was introduced for the Knights.

"We just finished a tournament in Las Vegas and we went 3-1," Altheide said. "Alexis was named to the All-Tournament team. We play Nipomo at home on Tuesday."

In a busy year for three local professional boxers, John Leo Dato and Jose Balderas remained perfect for their pro careers, but Karlos Balderas was knocked out and took his first loss.

"We've had a pretty good start so far, we're 3-0 in league," Hitch said. "Shi has played a really big role for us. She's one of my captains and she has great leadership. She's deadly around the 3-point line. Abigail is my point guard and she hit some big free throws against Pioneer in the last minute on Saturday. She's been doing a great job defensively and running the offense. Malia is a big presence on offense for us. She averages 13 points a game and is double-digit in rebounds too. She's inside and out. She's a great leader and captain on the team.

"We're excited for AG and the girls are ready. It's going to be one of the tougher games in league for us."

It's about that time: Cabrillo and Lompoc meet in series of showdowns this week

It's the most wonderful time of the year.  Well, in the Lompoc Valley at least. And no, it's not the holidays.

It wasn’t exactly The Big Game but you could call it The Big Match. A large crowd filled Cabrillo High School’s gymnasium Wednesday night to see the Lompoc Braves battle the Cabrillo Conquistadores in both boys and girls wrestling matches.