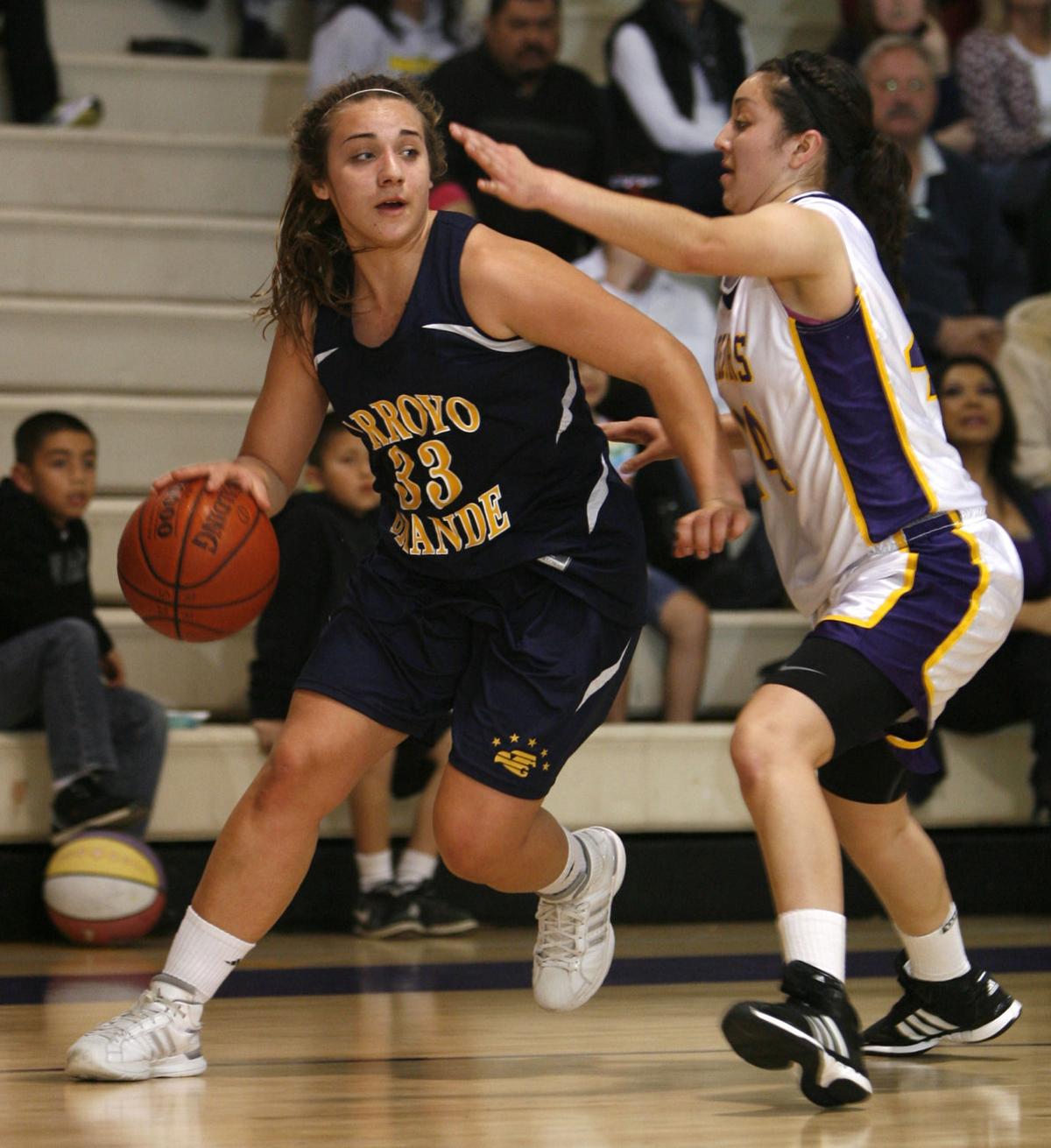 Arroyo Grande High School's Heather Madrigal maneuvers around Righetti High School's Valerie Luque in a 59-45 Eagles win in January of 2012. Madrigal is the eighth nominee for the Times' Player of the Decade award. 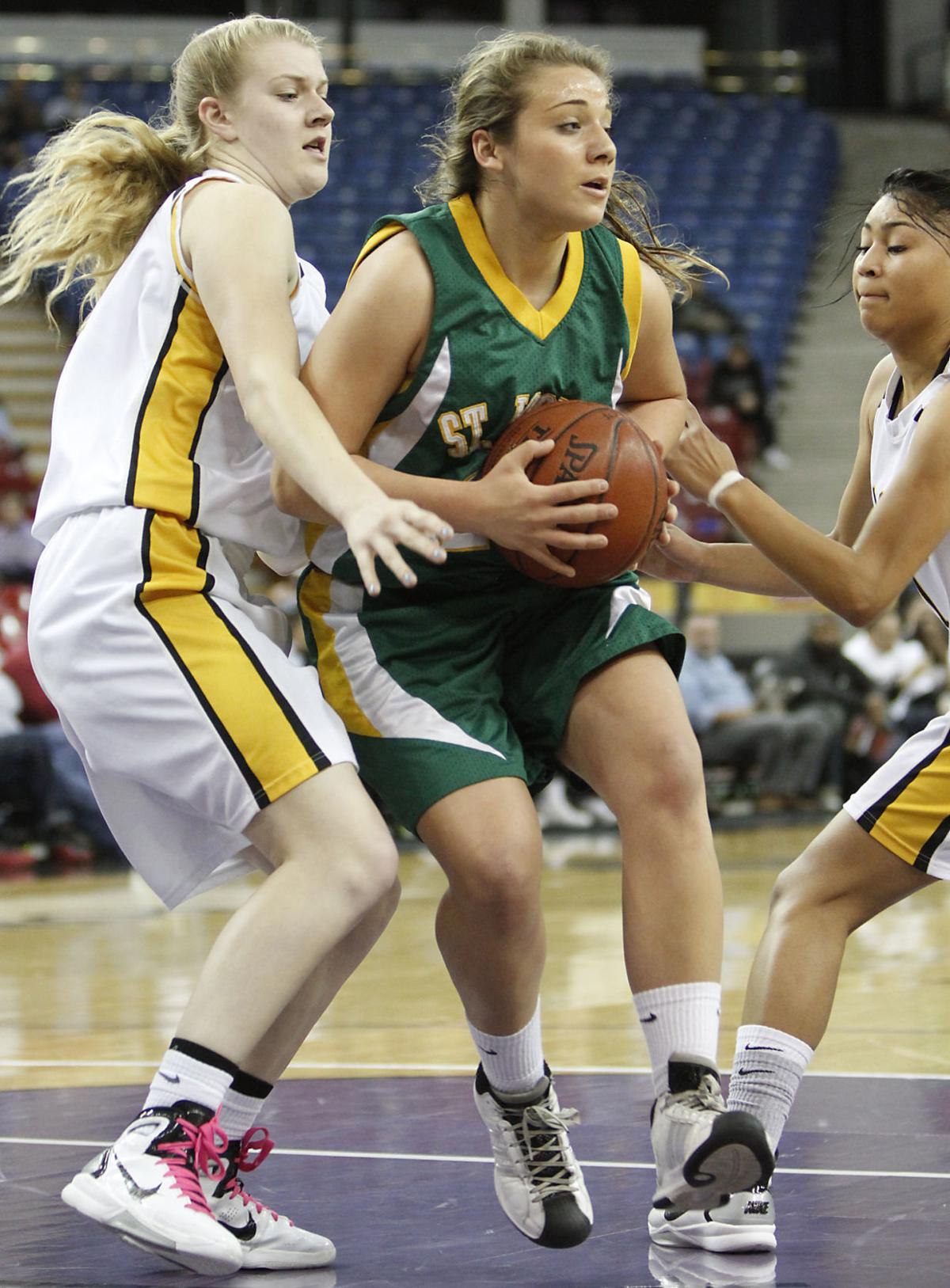 St. Joseph's Heather Madrigal drives to the hoop during the Knights' State CIF Division III championship win over Bishop O'Dowd at the Power Balance Pavilion in Sacramento in 2011. 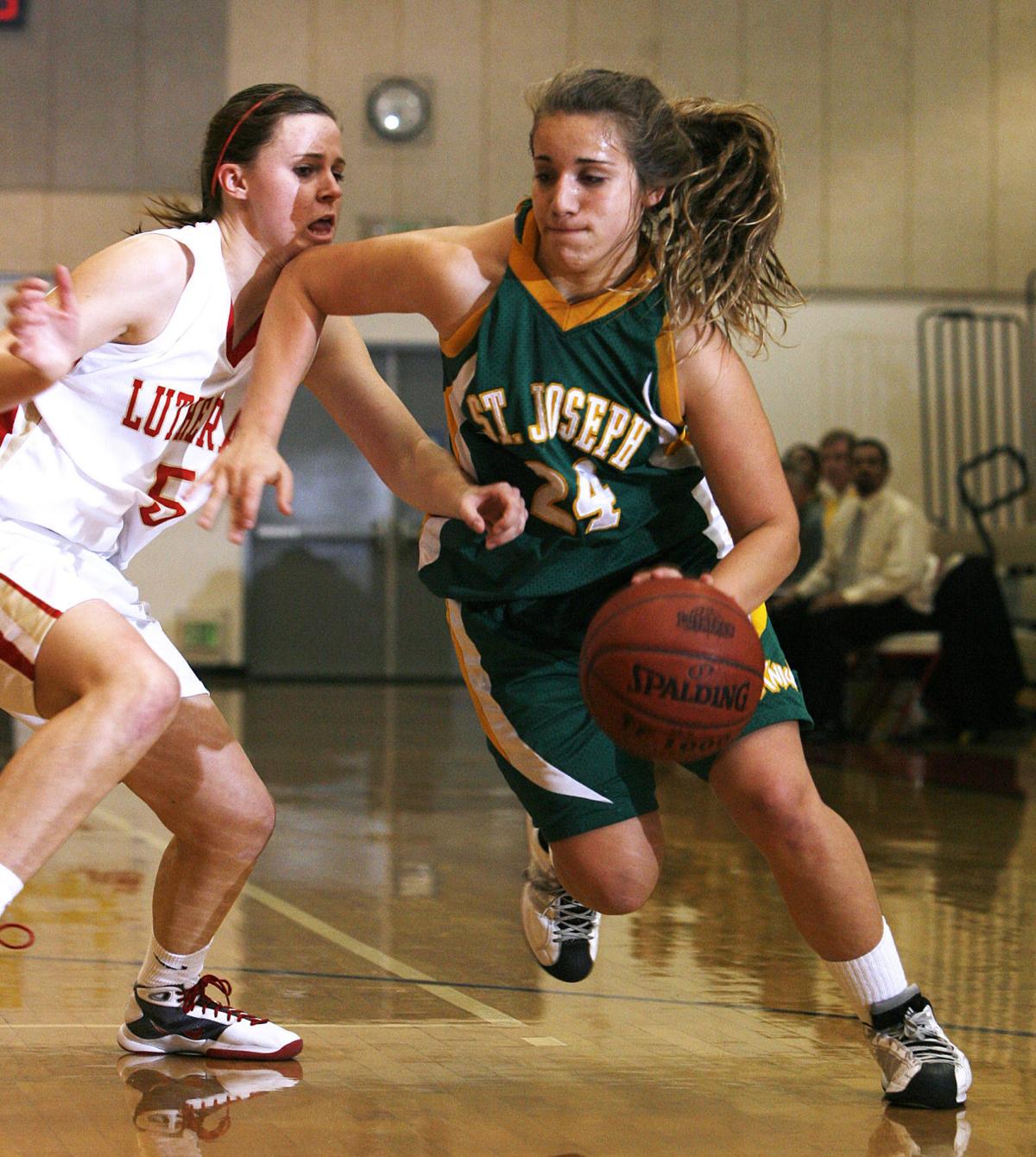 Heather Madrigal's prep career was so successful that it can be hard to fathom.

Did you know that Madrigal won four CIF titles in four years? She won either a CIF State championship or a CIF Southern Section crown every year she played high school basketball.

She won three CIF-SS titles and one state championship. That's four more titles than the total league games she lost during her career. (Madrigal went 48-0 in league in high school).

Madrigal's prep career becomes a little more impressive considering that she did that with two different schools.

Madrigal won Southern Section championships in her freshman and sophomore years at St. Joseph. She was then on the Knights' 2010-11 team that won the CIF State Division 3 championship.

Madrigal transferred to Arroyo Grande as a senior and helped pilot that team to the school's first CIF-SS title in girls hoops during the 2011-12 season.

Madrigal's teams won at least 27 games every year she played. In all, her teams went 113-20, never losing a league game.

She is the eighth nominee for the Times' Player of the Decade contest. She joins Danita Estorga and Molly Schlemer from Righetti, St. Joseph's Tatiana Dunlap, Valley Christian's Simone Swain, Lompoc's Danielle Morgan, Arroyo Grande's Ashlyn Herlihy and Cabrillo's Erin Jenkins. The Times is polling current and former coaches to develop its list of nominees for Player of the Decade.

The 5-foot-8 Madrigal wasn't just a role player on these teams either. In her three seasons with the Knights, she scored more than 900 combined points. Then, during her lone season at Arroyo Grande, she turned into the Eagles' top player and topped 500 points in that season alone.

Things have been pretty tough for Cabrillo's football team this past decade.

But not all of it was bad.

She was named the Times' All-Area MVP in 2011-12 after helping the Eagles to their historic CIF title. She said she transferred to Arroyo Grande after achieving so much success at St. Joseph because she felt the process was missing something.

"What was missing was the connection to God," Madrigal said after being named All-Area MVP in 2012. "I’d worked hard, we’d won (CIF Southern Section) championships (at St. Joseph in 2009 and 2010), a state championship, but things felt incomplete for me. My goal since the beginning of summer was to use the ability God gave me to glorify Him.”

The Knights beat Serra for a CIF-SS title in 2008-09. Madrigal had 12 points in the 2010 final win over Windward as a sophomore. The Knights lost to Serra in the CIF-SS divisional final the following year, in 2011, but would avenge that loss and eventually beat Oakland Bishop O'Dowd for the state championship afterwards that season.

Madrigal then transferred to AGHS for the 2011-12 campaign and captured her fourth CIF title with a win over Oxnard Rio Mesa.

Her coach at Arroyo Grande, Dwight MacDonald, said Madrigal was a "very blue collar player. She gets a lot of the intangible work done.

“She gets great position on the court. She gets a lot of important rebounds; she’s pretty much a relentless player. Her work ethic is outstanding. I know she wants to walk on at Cal Poly. Hopefully, she’ll be successful there.”

Players from Northern Santa Barbara County and Southern San Luis Obispo County whose final seasons where in between 2009-10 and 2019-20 are eligible.

Like clockwork, Hollister, who spent more than a decade coaching girls and boys tennis at Arroyo Grande High School, would phone the local newspapers with her team's results each time her team played.

And, just about every time, Hollister would have good news to report.

The Other Guys: Former Santa Ynez running back Austin Vreeland was just different

Vreeland reached the century mark in his second game with the Pirates in 2012, carrying the ball 26 times for 100 yards and two scores in a 19-14 defeat to Cabrillo.

From the Vault: Lompoc's Ryan Church went from Little League to the big leagues

The people who watched Ryan Church play Little League baseball in Lompoc probably weren't too surprised to see him carve out a solid seven-year career in Major League Baseball.

They may have been surprised to see him do it as a position player.

Cooks blossomed into a standout early in her Righetti High career and turned that into a long and accomplished spell at Washington State, where she played four years of basketball with the Cougars.

Arroyo Grande High School's Heather Madrigal maneuvers around Righetti High School's Valerie Luque in a 59-45 Eagles win in January of 2012. Madrigal is the eighth nominee for the Times' Player of the Decade award.

St. Joseph's Heather Madrigal drives to the hoop during the Knights' State CIF Division III championship win over Bishop O'Dowd at the Power Balance Pavilion in Sacramento in 2011.