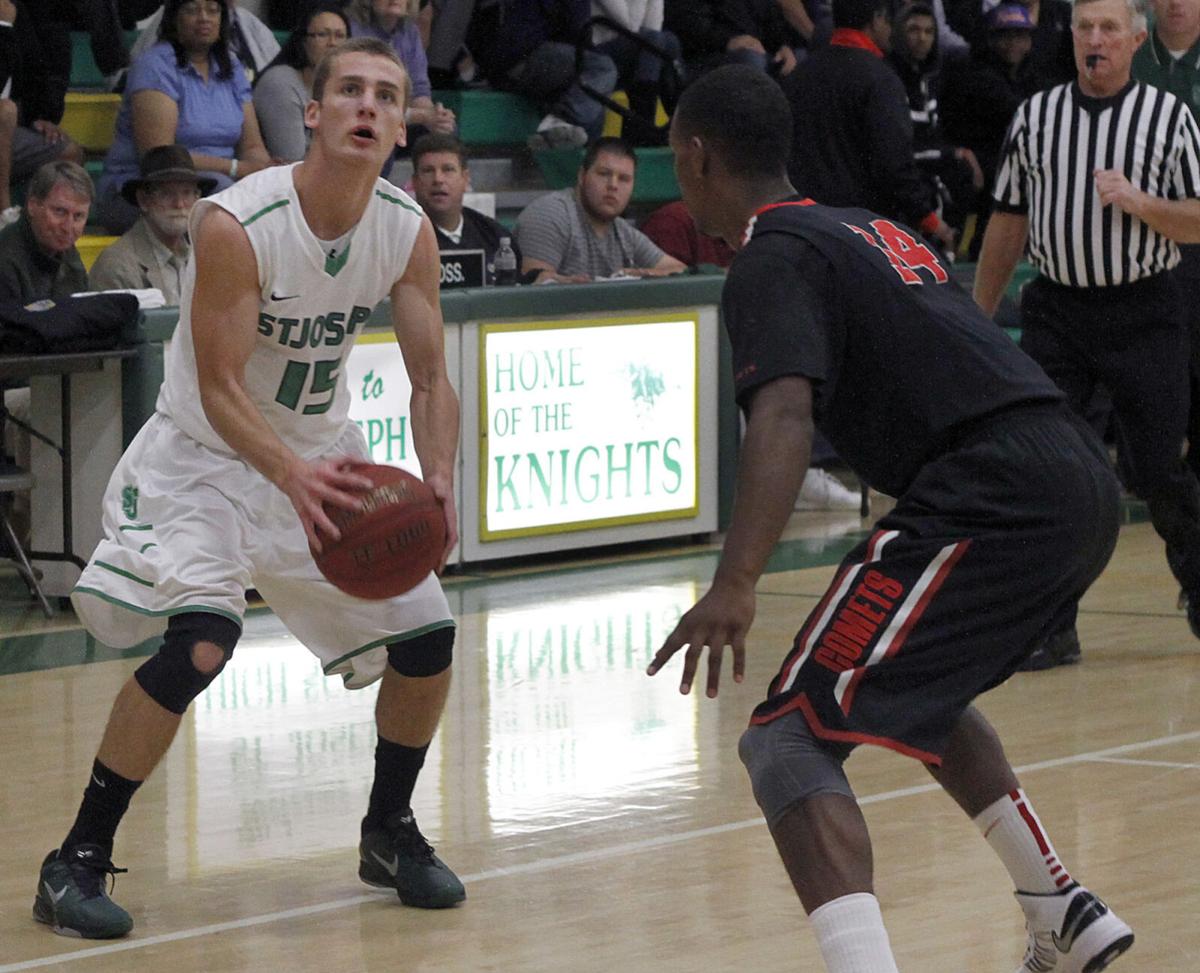 St. Joseph's Case Bruton sets up to shoot the ball against the Westchester Comets during a game at St. Joseph High School in December of 2012. 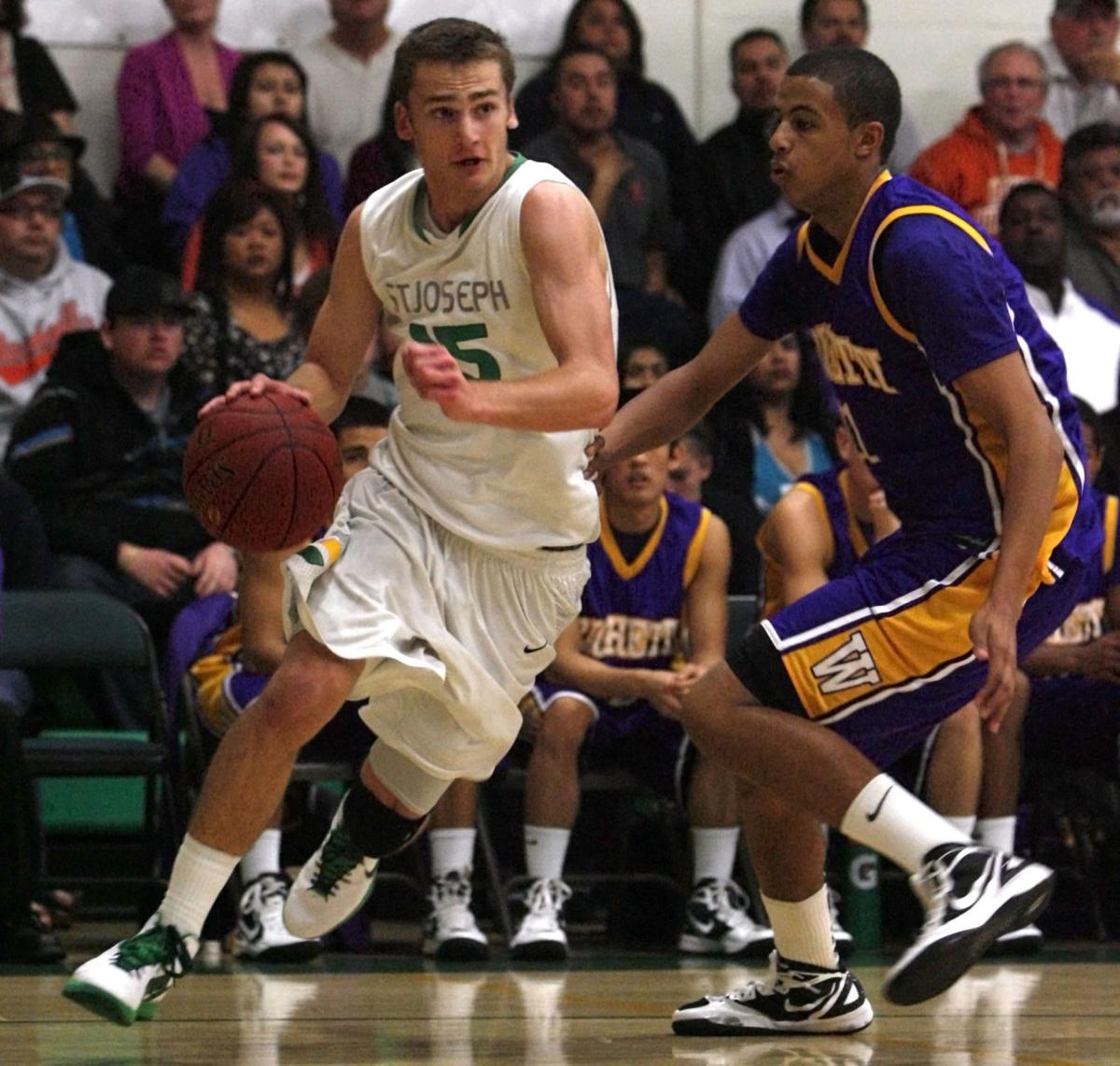 Case Bruton dribbles around Righetti High School's Cameron Walker during a 65-62 win at home in January of 2012. 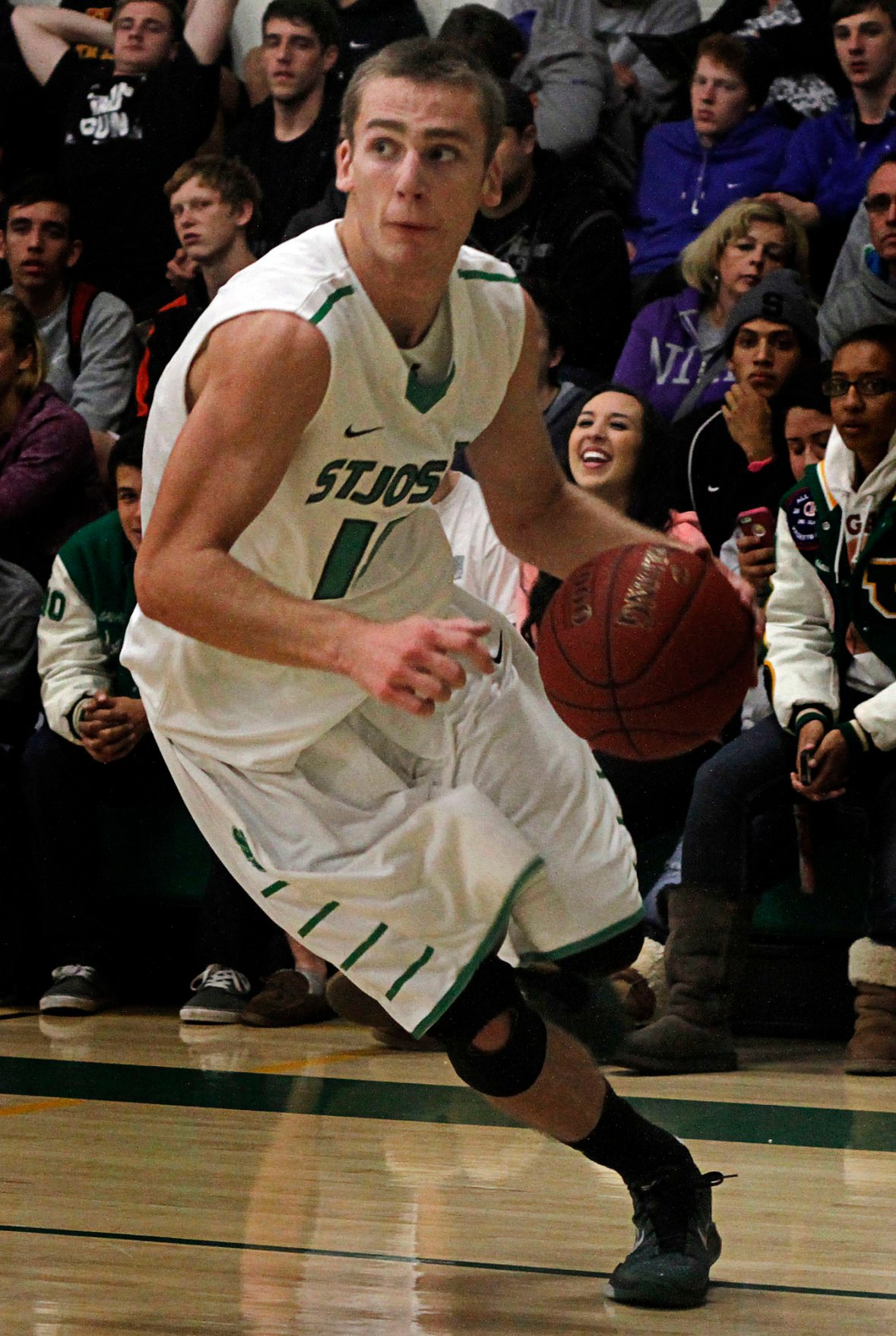 St. Joseph's Case Bruton drives to the hoop against the Westchester Comets during a game at St. Joseph High School in 2012. 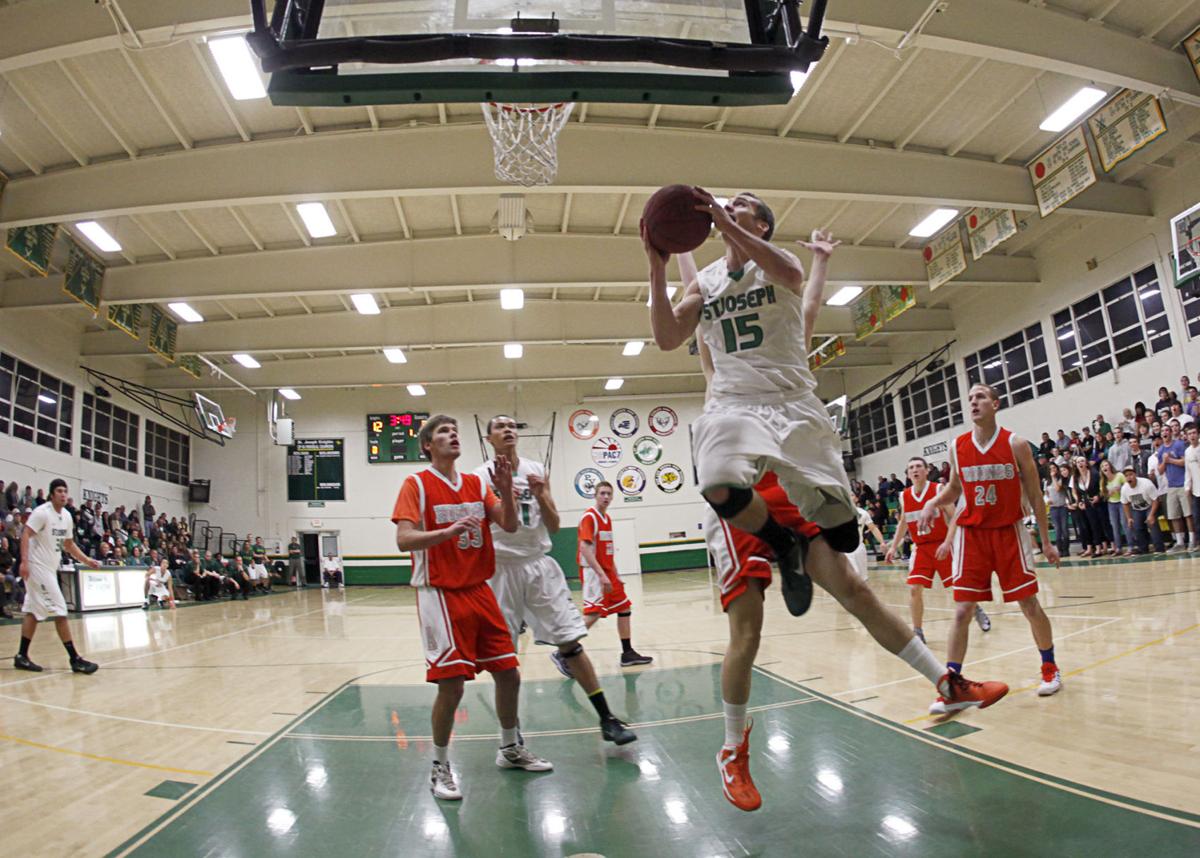 St. Joseph's Case Bruton scores during an 85-74 win over visiting Atascadero High in 2013.

Case Bruton had no illusions about his role on the basketball court.

Bruton wanted to score. And score he did.

The Los Osos native spent his first season of high school ball at Morro Bay and averaged 11.7 points per game with the Pirates as a freshman.

He moved on to a bigger program for his final three years of high school, transferring to St. Joseph. There, Bruton proved his could lead the bigger program.

Bruton put together one of the most impressive offensive careers -- and individual seasons -- with the Knights, scoring nearly 1,300 points in three seasons, including his 675-point campaign as a senior.

Righetti principal Karen Rotondi notified parents in an email Wednesday night. St. Joseph High School, which did begin on-campus instruction weeks ago, shut down its campus and switched back to distance after learning a student at that school had tested positive for COVID-19, also after attending a Halloween party.

As a senior in the 2012-13 season, Bruton averaged 21.1 points per game as the Knights went 23-9. Bruton helped the Knights advance to the CIF Southern Section Division 4A semifinals and a state playoff win that year.

“I think the thing that separates Case is his dedication and commitment, you know, not only to improving himself but improving the team,” St. Joseph coach Tom Mott once said of Bruton. “He’s the ultimate team player and someone you knew was going to lead every day on the court.”

“We’re definitely going to miss a guy who gets 20 points a game, but what we’re going to really miss is his leadership," Mott said when Bruton signed with Concordia. "He definitely raised the bar.”

Bruton raised the bar by playing high-level offense, a skill that was based on his outside shot. Bruton, at 6-foot-4, would spend most offensive sets running off screens, from baseline to baseline or on the wings, for what seemed like all 32 minutes of each game. He knocked down 58 3-pointers as a senior and hit over 100 in his final two seasons.

Central Coast Classic: The night the Santa Ynez and St. Joe's clashed with a playoff berth on the line

The shooting guard averaged 11.1 points per game in his first season at St. Joseph and bumped that up to 14.5 points per game as a junior. Then, as a senior, his scoring averaged jumped up to over 21 points a game.

Bruton wasn't a one-dimensional player. He did average 5.9 rebounds, 2.0 assists and 1.3 steals per game at St. Joseph.

Where does Jacob Nunez rank among area's best of past decade?

Bruton developed into a capable player at Concordia, averaging about eight points a game over his final two seasons in Irvine.

GBB: Player of the Decade Final Round

Flowers made it to the final round without too much drama. Dunlap, on the other hand, had to grind out a win over the top remaining seed.

Dunlap narrowly fended off Ashlyn Herlihy of Arroyo Grande in the semifinals. It was a close fight, but Dunlap pulled away late to score the victory, 1,089 to 876.

On the other side of the bracket, Flowers cruised past Heather Madrigal, who played at both St. Joseph High and Arroyo Grande with Flowers and Dunlap, in the semifinals. Flowers voters have consistently led the round-by-round voting.

Voting ran from Wednesday, Oct. 28 to closing at 4 p.m. Tuesday.

In all, 4,431 votes were cast in the semifinal round. There were 3,044 votes cast in the quarterfinals and 4,500 votes in the opening round, meaning readers have cast about 12,000 total votes in this contest.

Dunlap won a CIF state title in her sophomore season with the Knights. Flowers was a freshman that year and, as fate would have it, filled in for an injured Dunlap in the state title game, giving the Knights valuable defense and rebounding in their win over Bishop O'Dowd.

Dunlap earned one All-Area MVP award, during her senior season. For her career, Dunlap averaged 15.1 points over 87 games with the Knights. As a junior in 2011-12, Dunlap averaged a double-double for the season, with 15.3 points and 10.3 rebounds per game, while also dishing out 3.0 assists and swiping 2.4 steals per game.

Readers have cast votes on the Santa Maria Times' three websites, santamariatimes.com; lompocrecord.com and syvnews.com. The voting for the final round is now live on those three websites and will close on Tuesday, Nov. 10 at 4 p.m.  The Times polled current and former coaches to develop its list of nominees for Player of the Decade.

What you need to know for Friday, November 6

What you need to know for Friday, November 6

From the Vault: Charting Vai Taua's rise to football stardom

Taua has starred in high school and college. He's earned All-American honors and nearly etched out a career playing in the NFL. Taua is now a rising assistant coach with a Division I football program that also happens to be his alma mater.

In one of the most hotly-contested races to this point, Dunlap came out victorious over former teammate Kaitlyn Flowers. Dunlap ended up with an 877-vote advantage as 9,139 votes were cast over the last week, with the polls closing at 4 p.m. Tuesday. Dunlap had 4,958 votes and Flowers finished with 4,181.

Now, after a long layoff due to the coronavirus pandemic, Will is chomping at the bit to get back on the field for the 2021 spring season... and a potential 2021 fall season.

St. Joseph's Case Bruton sets up to shoot the ball against the Westchester Comets during a game at St. Joseph High School in December of 2012.

Case Bruton dribbles around Righetti High School's Cameron Walker during a 65-62 win at home in January of 2012.

St. Joseph's Case Bruton drives to the hoop against the Westchester Comets during a game at St. Joseph High School in 2012.

St. Joseph's Case Bruton scores during an 85-74 win over visiting Atascadero High in 2013.