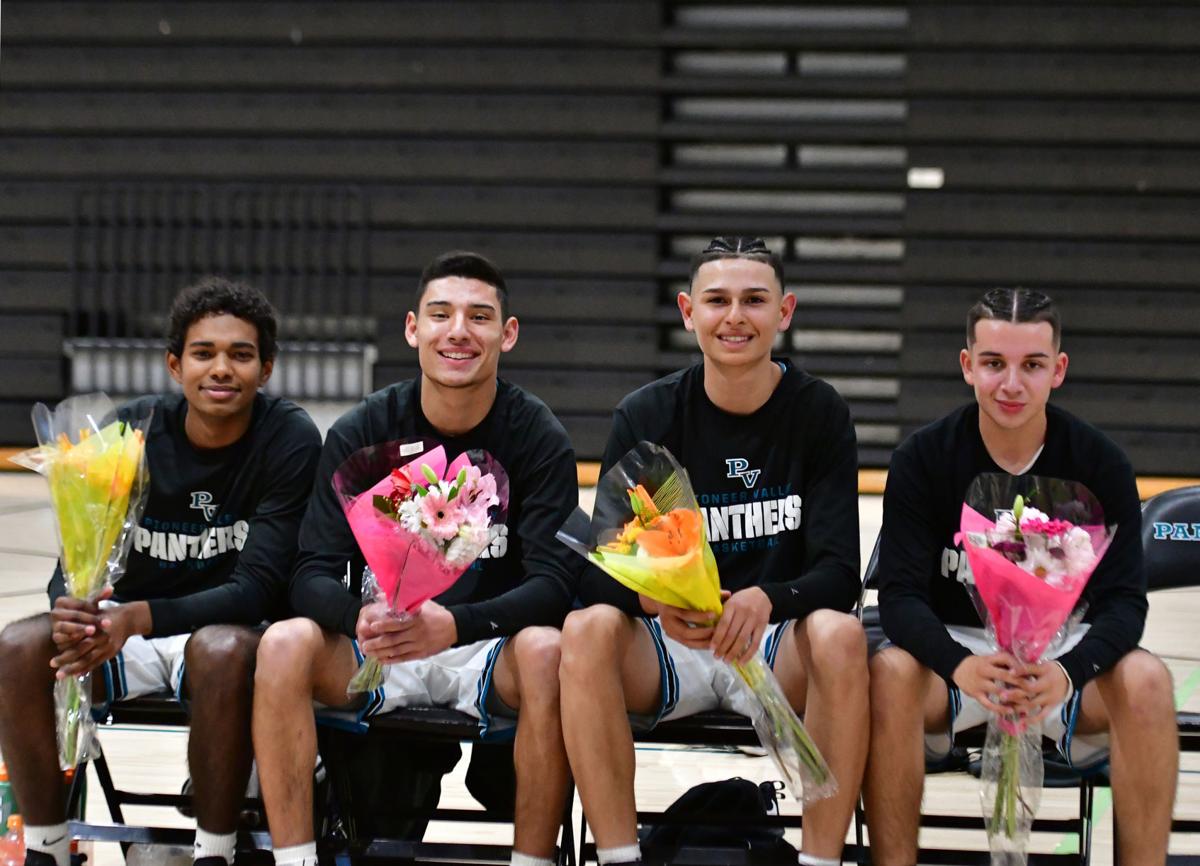 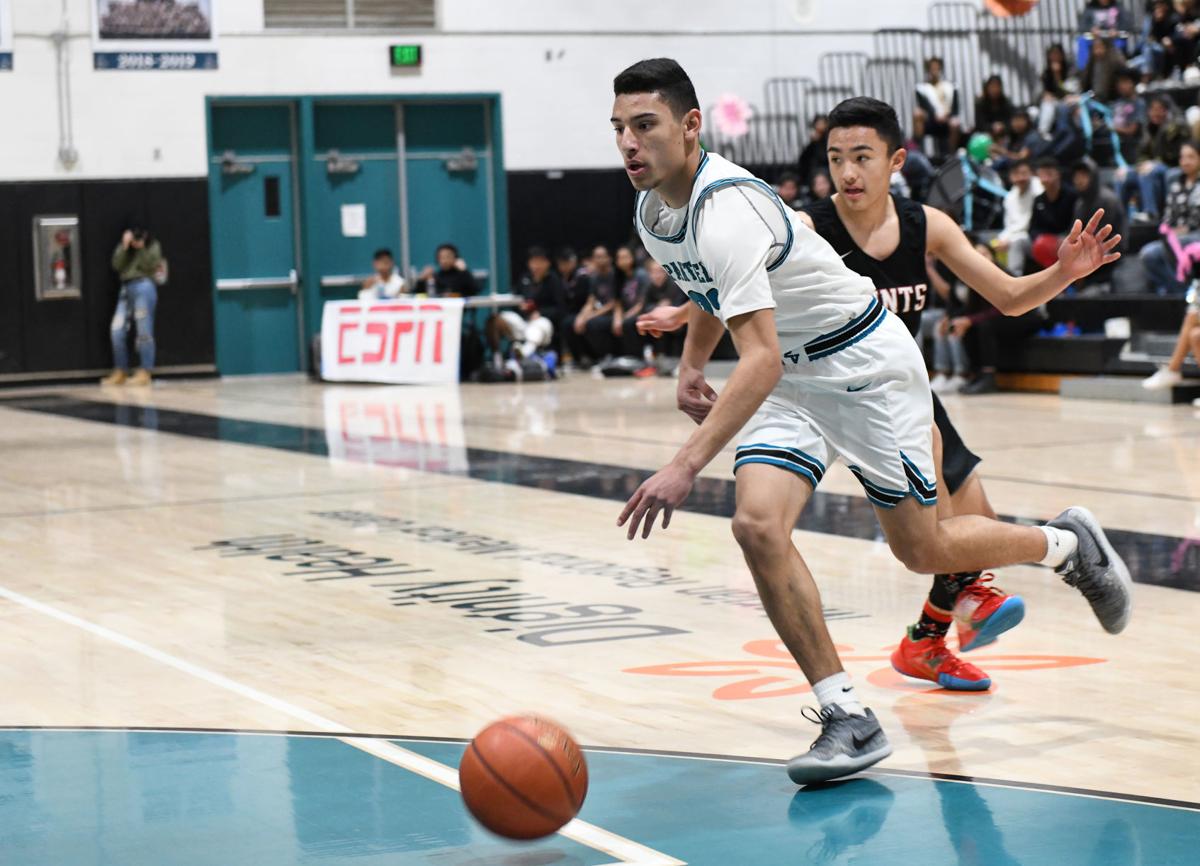 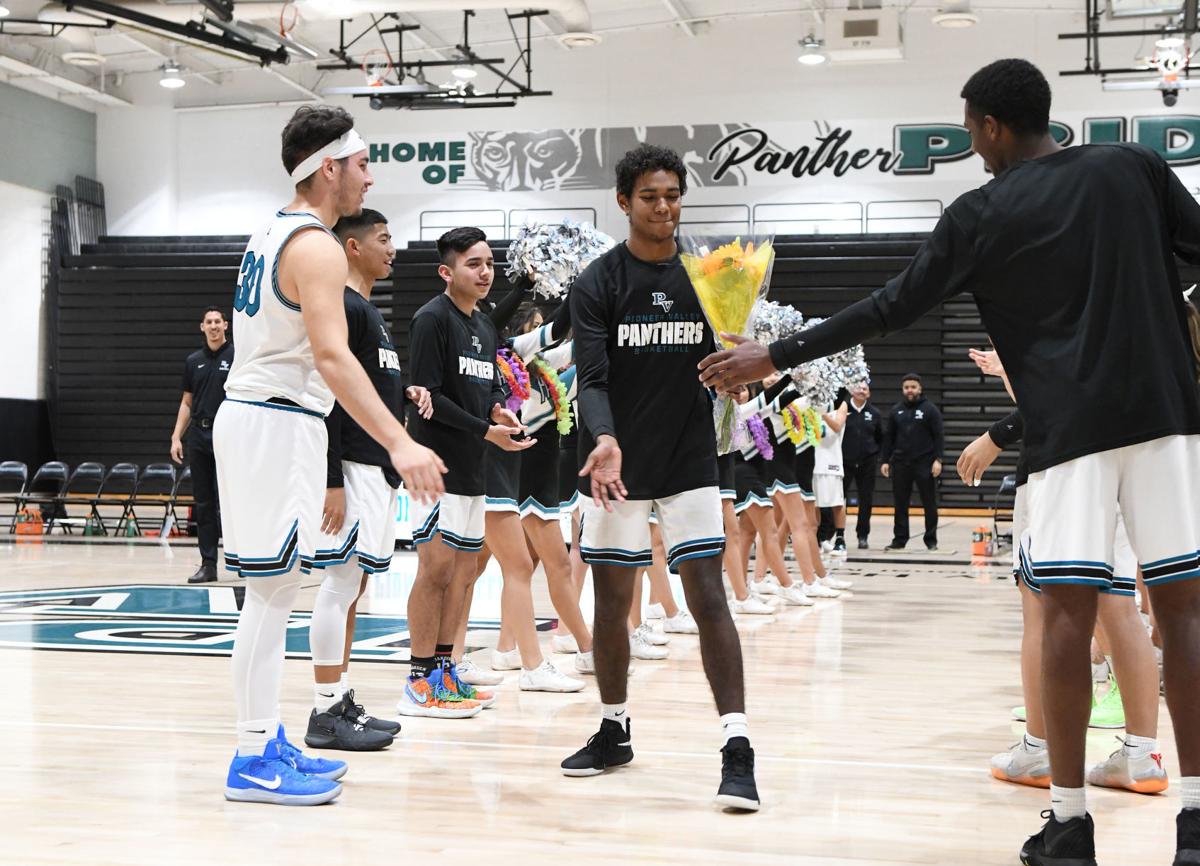 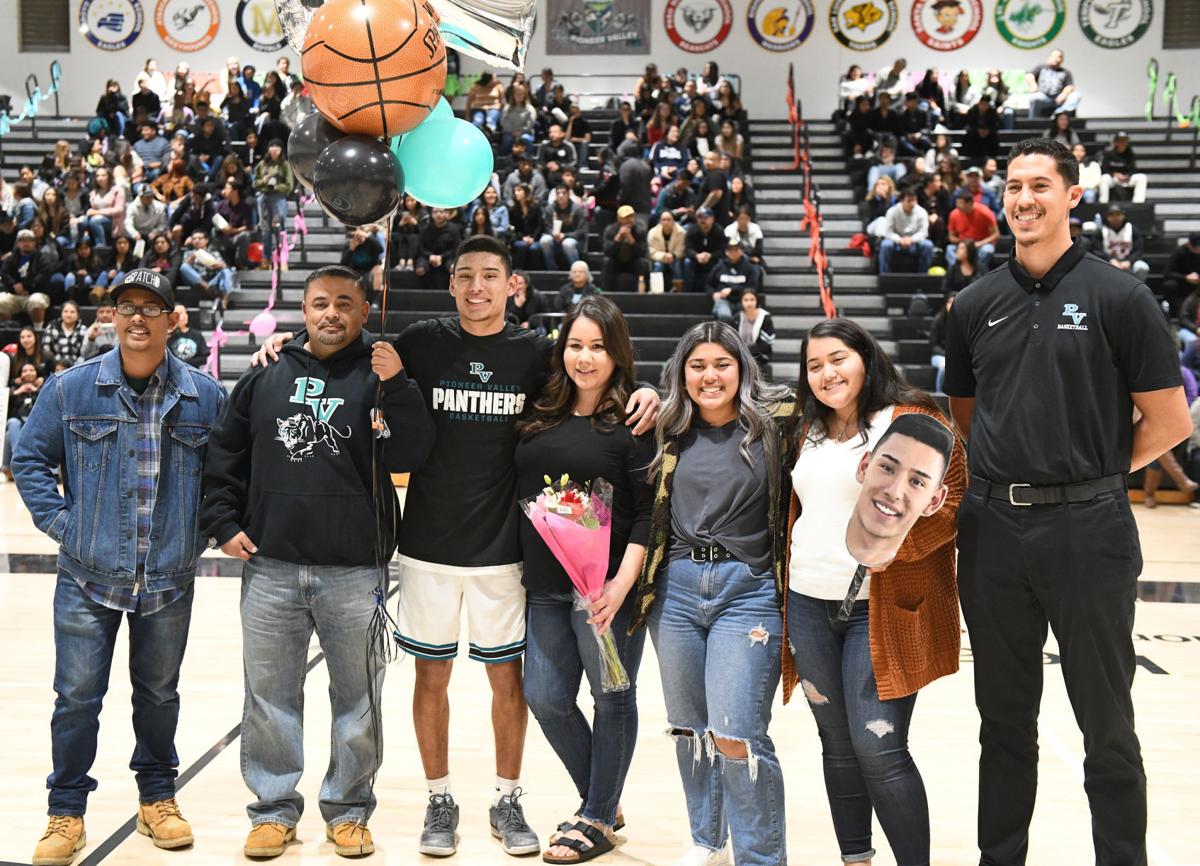 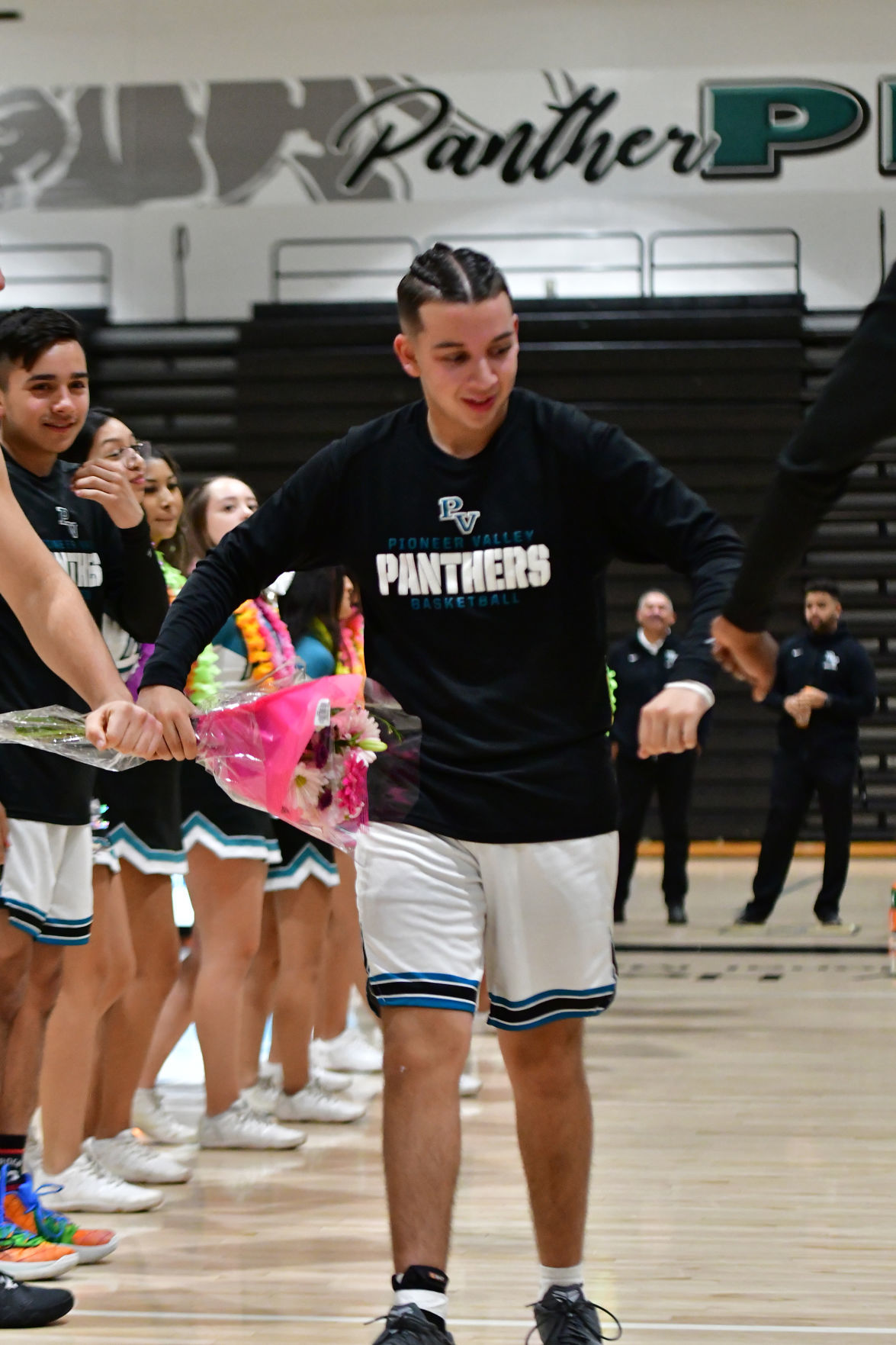 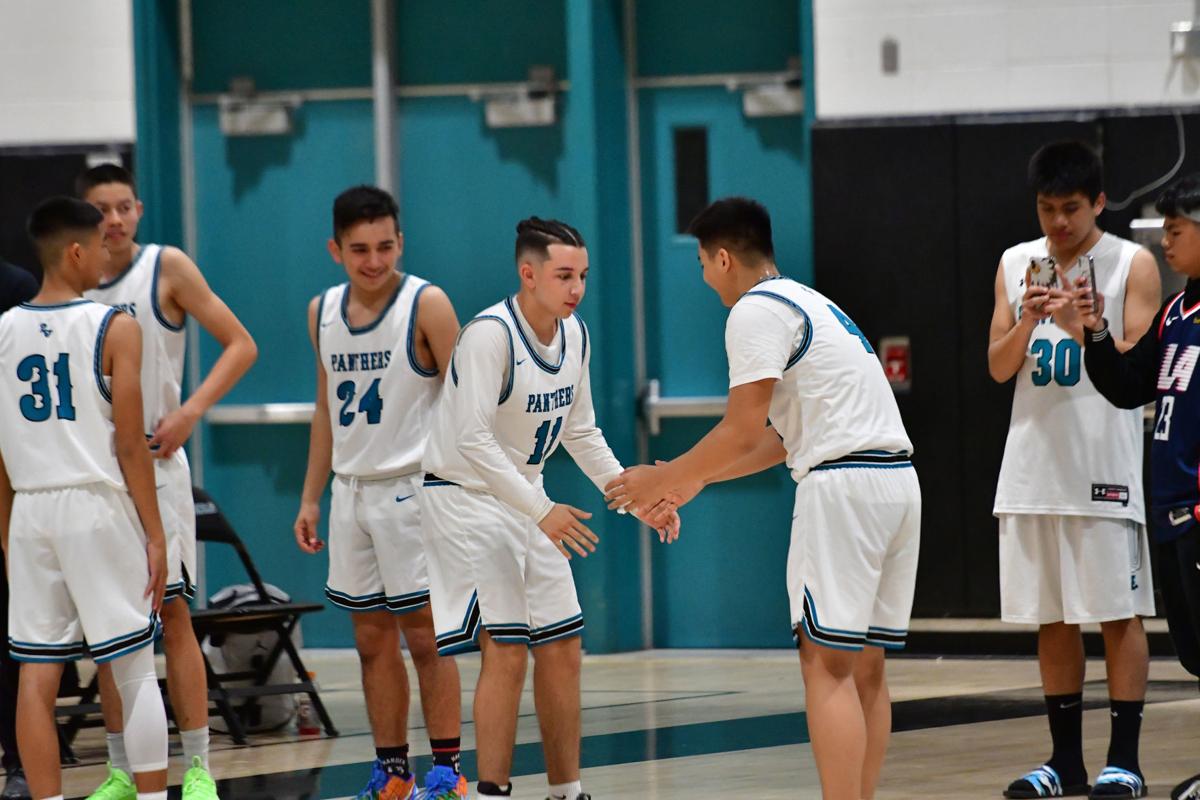 Pioneer Valley guard Marc Cabeliza said beforehand that his team would win the game it had to win Friday night, and Cabileza set about making sure his team did win.

Cabileza made two free throws to put the Panthers ahead 67-63 with 20.2 seconds left in overtime, all but icing the win for PV. The Panthers went on to a 70-65 overtime Ocean League win over crosstown rival Santa Maria in front of a big and loud crowd on the Panthers’ Senior Night at Pioneer Valley.

“I sprained a finger two weeks ago against Atascadero, and it’s affected my shooting,” Cabileza said afterward.

“Free throw shooting has gone pretty good for me. I just pretty much blocked out the pain on the free throws,” and it worked.

Panthers coach Ross Rivera said, “Marc said before the game that we were going to win, and the guys went out there and got it done.”

Had the Panthers (6-17, 5-6) come up short Friday night, Rivera said, it would have knocked them out of contention for an at-large bid into the playoffs.

As it is, the Panthers face another must-win game at Templeton Tuesday night in their regular season finale. Tip off time for that one is to be determined.

“We have to finish at least .500 in league,” for consideration for a playoff bid, said Rivera.

After the Saints’ Jon Garcilazo hit a 3 to tie it at 55 in regulation and force overtime, the Panthers gave themselves a lift by scoring on their first four possessions in the extra period.

A technical foul on the Santa Maria bench in the third quarter of regulation also lifted the Panthers. Pioneer Valley, awarded two shots and possession, got only one made Isaiah Guerrero free throw out of the technical,  but it was enough to help force overtime.

Trevino (22 points for Pioneer Valley) and Rolando Pina (17 for Santa Maria) kept scoring inside, and that kept both teams in it.

The Saints made eight 3’s on the night, a rather average night for them in that department. They made just two the first half of regulation.

The Panthers didn’t make any 3’s. They didn’t shoot any either.

The Panthers made 24 of their 34 free throws to the Saints’ 11 of 22. Cabeliza, Guerrero (seven for eight on free throws) and Morin all finished with 11 points for the Panthers.

The Tigers improved to 22-5 overall and 8-1 in league to clinch at least a share of the Mountain League title.

San Luis Obispo was led by Emilio Corona and Lamar Jefferson, who each had 11 points.

Gavin Edick dropped in 21 points, and Sean Swain racked up 16 points and 10 rebounds for the Lions (10-9, 8-4 Coast Valley League) who won at Shandon in their season finale.

The Lions will learn their first-round playoff assignment Sunday.

The Spartans (21-4, 9-0) had 21 steals and blocked nine shots as their defense turned it on in an Ocean League win at Lakeview Junior High School.

Erynn Padhal made 11 of her 13 shots from the field and scored 24 points for Orcutt. Giselle Calderon made four of her seven 3-point attempts en route scoring 21 points.

Calderon had seven assists. The Spartans made seven 3’s.

Grace Cose had 12 points and 10 rebounds and the Lions (13-7, 9-3 Coast Valley League) won handily at Shandon to finish their regular season.

Like the VCA boys, the VCA girls will find out their first-round playoff assignment Sunday.

Alexis Brackett scored 11 points and Jaylee Cantu had nine for the Knights, who lost an Ocean League game to the Pirates.

The Titans (19-7, 6-5) struggled with their offense and lost an Ocean League game to the Royals.

The Hancock College teams, under first-year coach Kenna Walter, made their respective debuts at the Bakersfield College Invitational.

Yasmin Mendez finished second in 16:06 in the women’s steeplechase. Elijah Evans placed fourth, at 41-7, in the men’s triple jump. Hiram Anakaleo finished fifth at 41-10.75 in the shot put.

Girls wrestling continues to grow on the Central Coast

The CIF has sanctioned the girls state wrestling tournament since 2010 and Pioneer Valley, Santa Maria and Righetti all have thriving girls wrestling programs.