Coronavirus update: Only half of Americans say they would get vaccine. Here's the morning's latest.

There is a decent chance Svetich's basketball career did not end Saturday. "I'm going to Cal Poly as a preferred walk on," Svetich said after she scored a team-high 16 points and helped the North stave off a late South comeback.

Svetich scored 16 points and snared six rebounds despite, she said, not being in full game shape.

"After the (high school) season, I took some time off," Svetich said. "I got back into it a couple weeks ago with some workouts, but I'm still not completely in shape yet."

The North seemed on its way to winning handily after Nipomo senior Janna Slover nailed a 3-pointer to put her team ahead 38-24 at the 5:33 mark of the third quarter.

The South gradually climbed back into contention, and St. Joseph's Maddie Miller made it a one possession game when she drained a 3-pointer at the 7:01 mark of the fourth quarter to pull the South within 47-44.

The South had a chance to tie on its next possession, but Miller missed a '3', and the South couldn't pull any closer.

Mission Prep point guard Ary Gonzales beat tough defense and scored on an inside move at the 5:25 mark of the fourth quarter to make it 51-45, and the North did enough after that to keep the South at bay.

Svetich helped the North salt away the win by scoring her squad's last four points.

The North's Catherine Talley of Arroyo Grande was the leading rebounder with 11. Mia Gonzalez of Mission Prep pulled down nine rebounds, Peyton Pelech of Arroyo Grande snared eight and Jayden Loewens of Paso Robles snagged seven for the North, which out-rebounded the South 56-43.

Lita Wright of Santa Ynez scored 10 points for the South. Wright was also the South's rebounds leader with eight. Paquet pulled down six. Cabrillo senior Alexa McCune helped the South stay in it late with some key defensive steals.

Svetich said, "It was cool playing with these girls (on the North) after playing against them all this time. It was nice that we were able to have one last high school game together."

Orcutt Academy coach Tom Robb coached the South squad. "This was my first time coaching this game, and it was great," he said. "The girls did a great job."

The crowd filled up nearly one half of the Hancock stands (the other half was, customarily, folded up), and a pleased event organizer Gary Prober said, "I think this might be the best attendance we've ever had."

Righetti senior and Tulane football commit Caleb Thomas was the game MVP, scoring 20 points and grabbing seven rebounds as he helped the South edge the North in the second half of the 29th annual Kiwanis Central Coast All Star Basketball Spectacular doubleheader.

The South saw the 86-75 lead it had to start the fourth quarter disappear but rallied late and won on foul shooting down the stretch.

The South hit six of its eight free throws in the last 1:08. After seeing the North go ahead briefly, 99-98 on an Adasson Wright free throw, EJ Brinez of St. Joseph put the South ahead for good, 100-99, when, with 38.8 seconds left, he made the first of two foul shots for the second straight time.

Kainoa Keuma, Brinez's St. Joseph teammate buried two free throws with 9.6 seconds left. Caleb Whalen of Arroyo Grande pulled the South within 102-101 when he made a runner in the lane with 0.6 seconds remaining.

The North fouled the South's Joon Soo Lee of Righetti immediately, but Lee made both free throws and Keuma intercepted a last-gasp North throw-in.

Keuma led the South with 24 points. Brinez and Thomas Segal of Santa Maria scored 10 points each.

Round Table: Righetti High basketball standouts Alijah Paquet and Caleb Thomas go from all-stars to Athletes of the Week 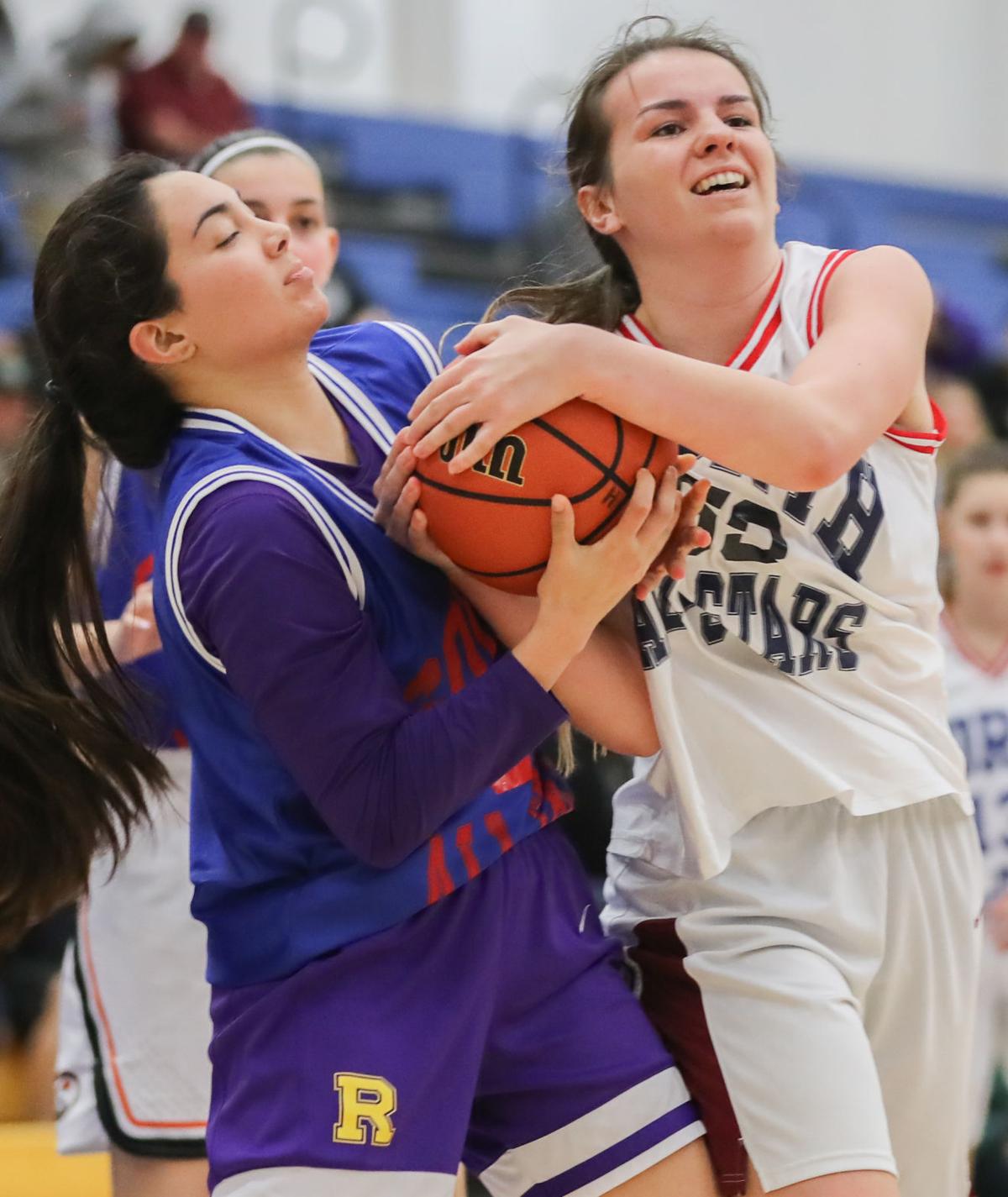 Jayden Loewens (53) of Paso Robles battles Alijah Paquet (20) from Righetti for a loose ball during the 2019 Kiwanis All-Star Spectacular at Hancock College's Joe White Memorial Gymnasium. There was no Kiwanis All-Star game this year due to the coronavirus pandemic. 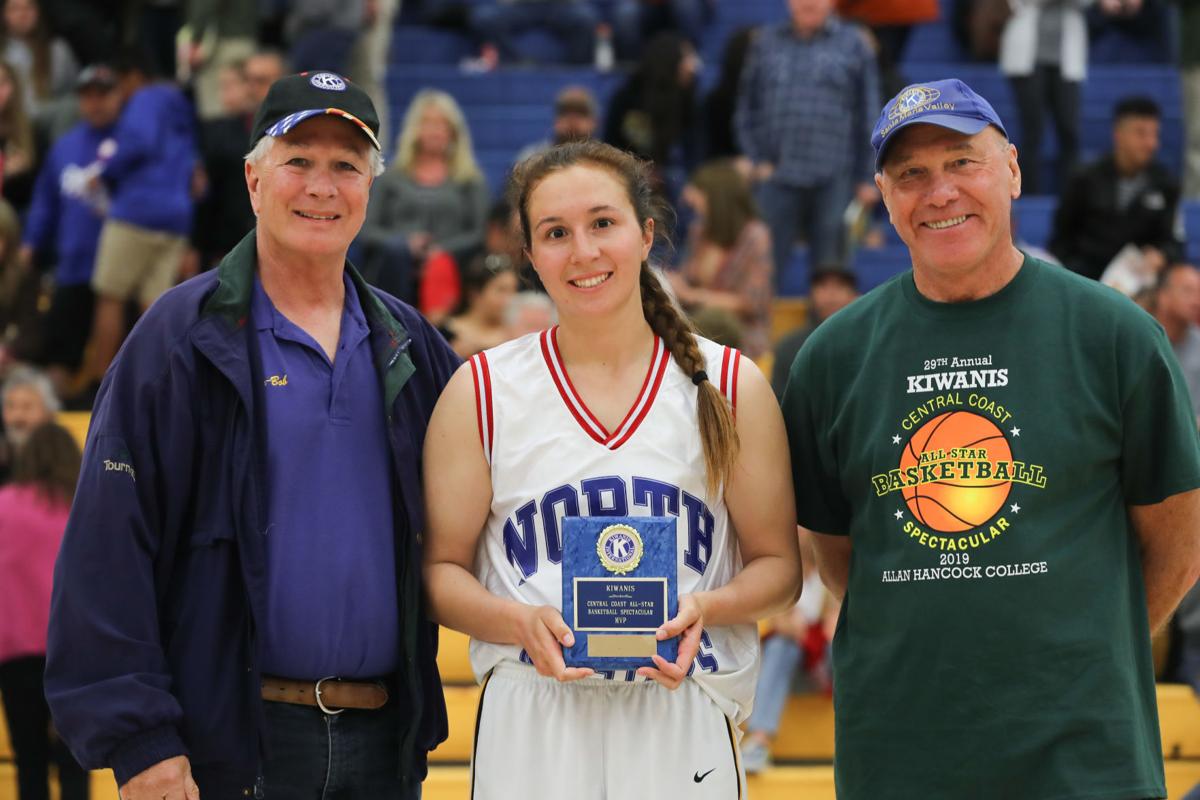 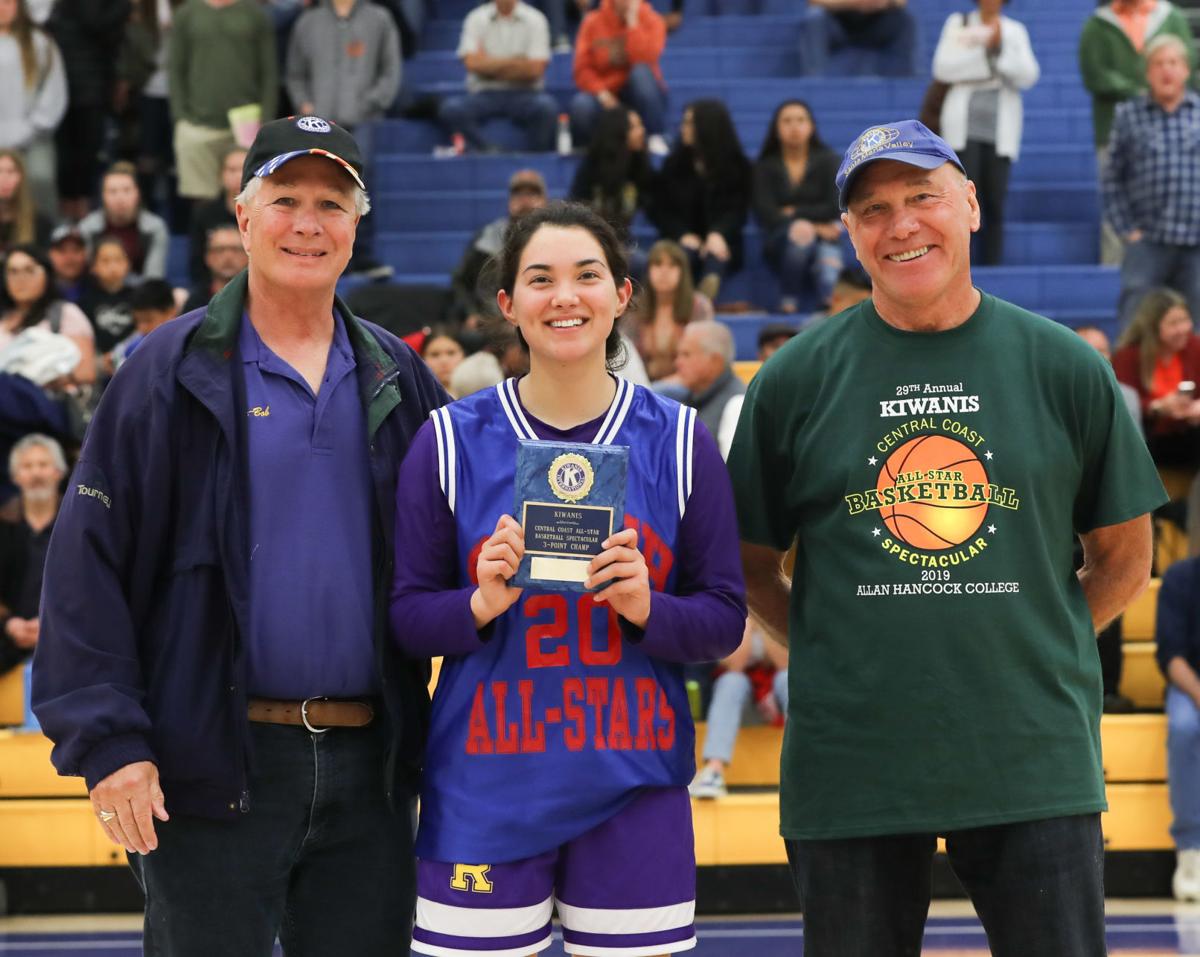 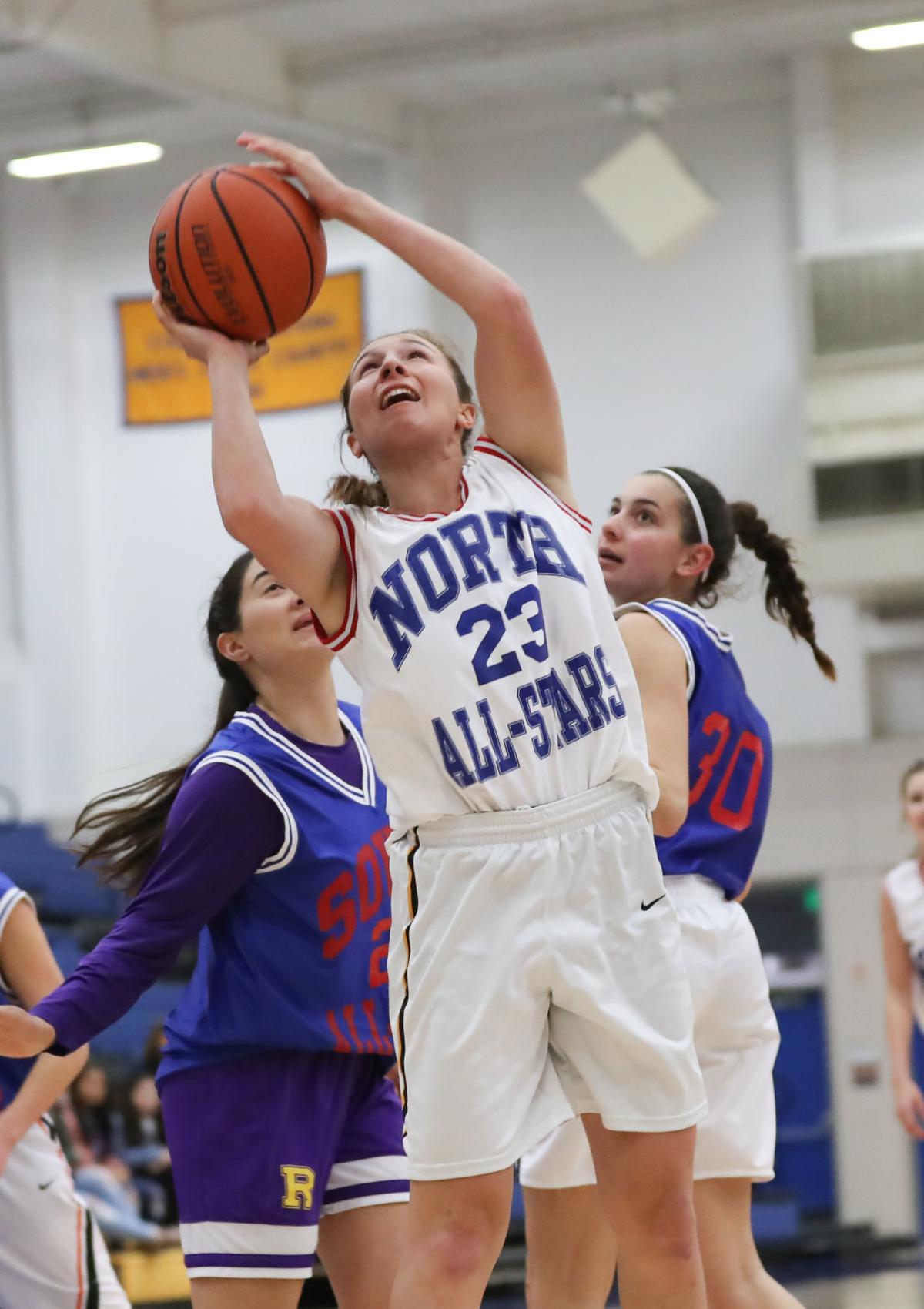 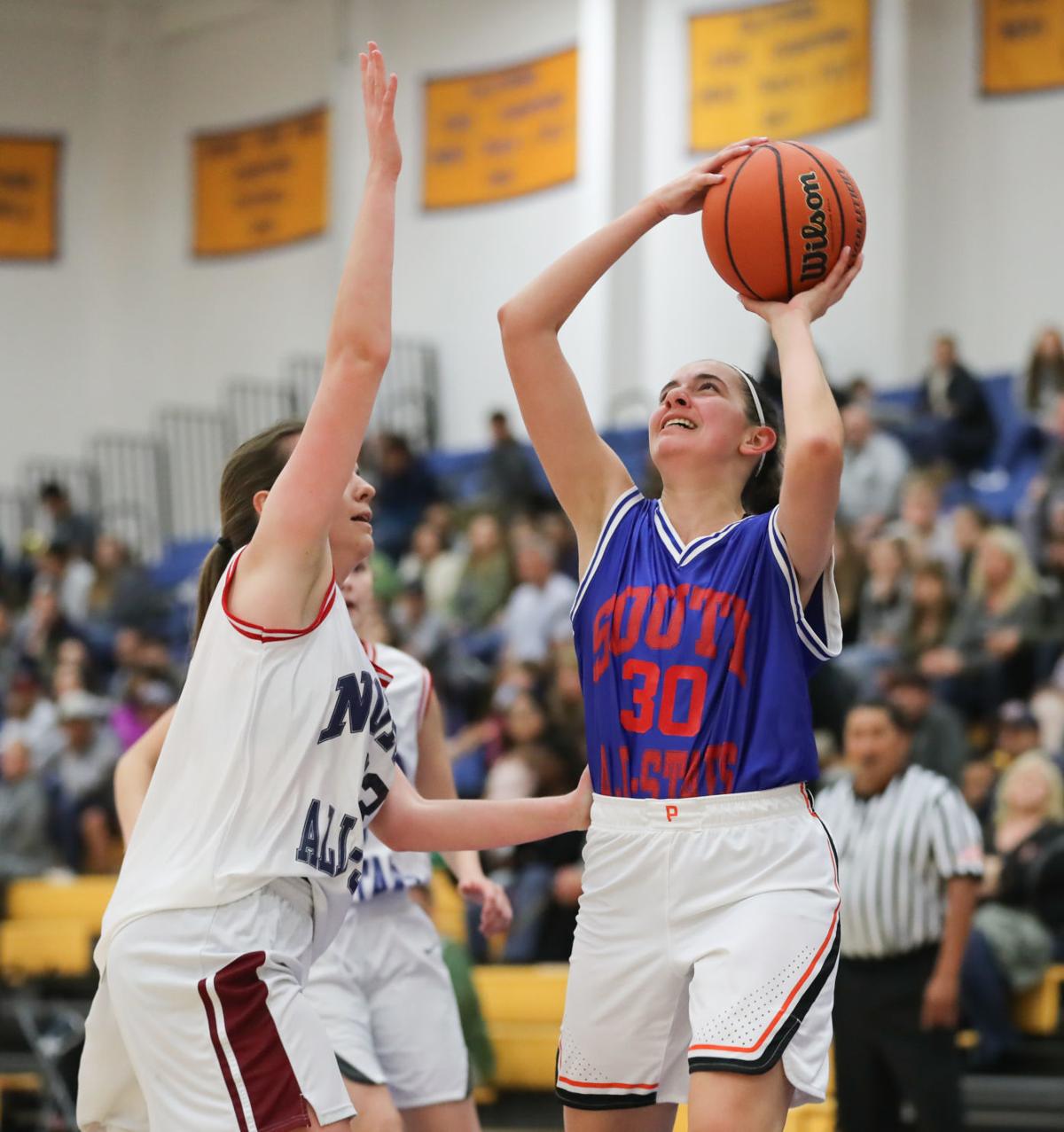