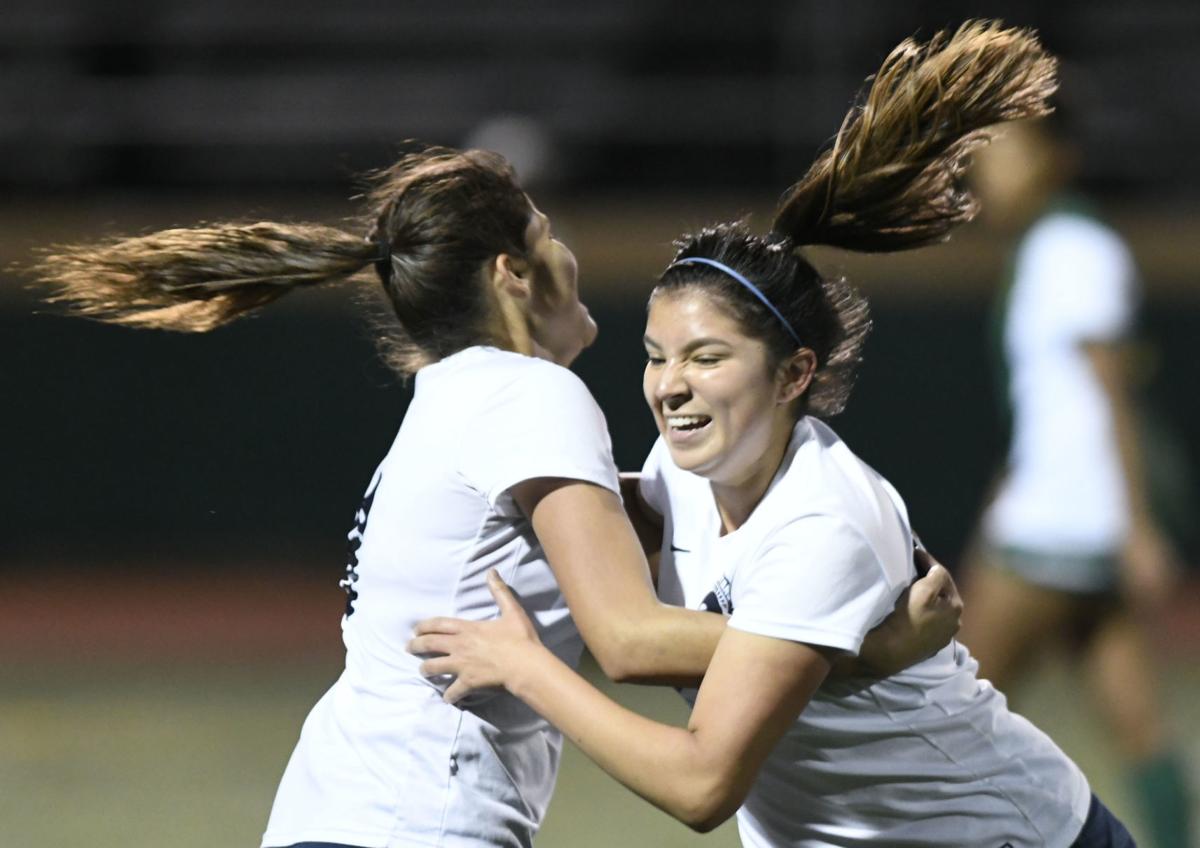 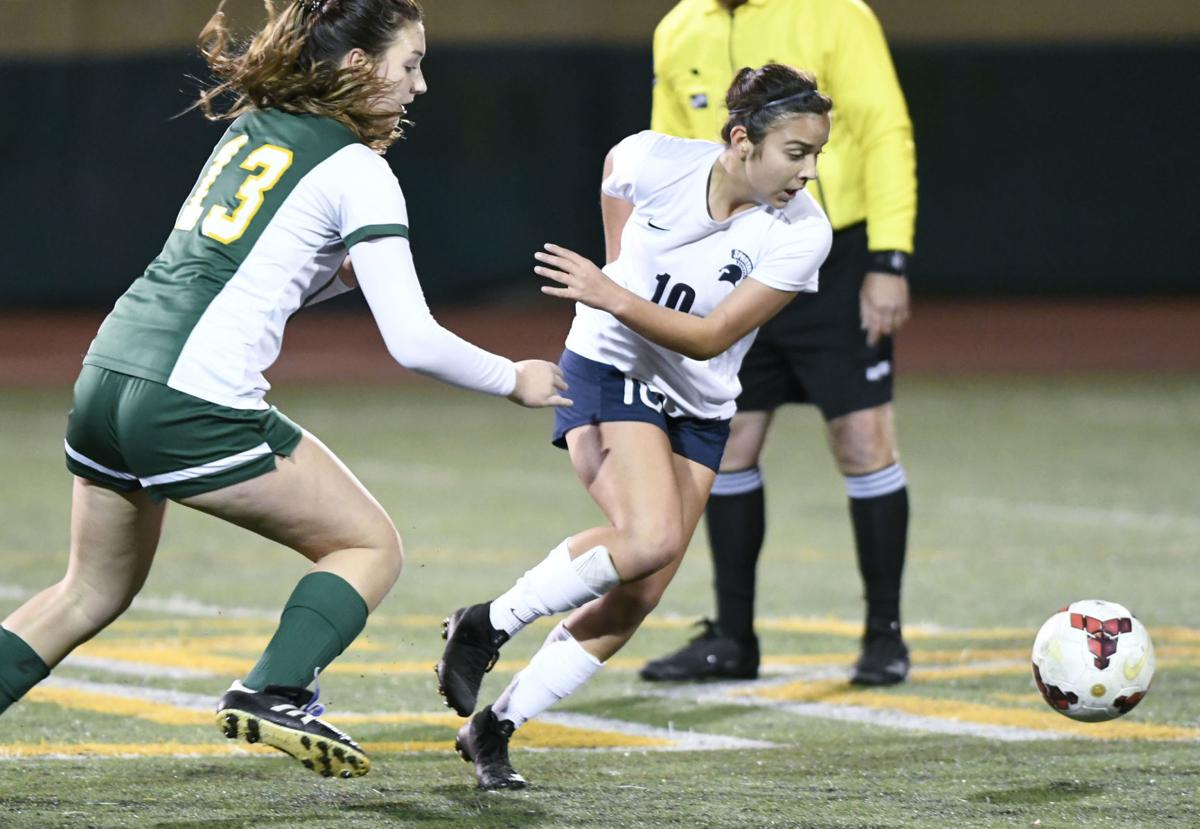 Orcutt Academy's Mariana Chavez (10) keeps the ball from St. Joseph's Avery Nelson on Wednesday. Chavez scored and assisted on another goal Thursday in the Spartans' 5-2 win over Righetti.

The very first game as Orcutt Academy's girls soccer coach for Brian Speer ended in a 17-0 loss to Righetti.

That was eight years ago.

Fast forward to Thursday night, and the Spartans came away with a 5-2 win over the Warriors in a non-league game.

"This program has come a long ways," Speer said. "My very first game at Orcutt Academy, Righetti beat us 17-0. Now we flipped the script and to beat them 5-2 is just incredible. We played them last year and tied 3-3 and some of the girls thought Righetti had a better team this year. They're well coached and they've got a lot of great players."

The Spartans improved to 2-0-2 on the season. They've beaten Dunn and now Righetti and also drew with St. Joseph and Lompoc.

Alyssa Castro scored both goals for the Warriors on free kicks in the second half.

It was Solorio, though, who led the Saints in scoring with 19 points. She also grabbed nine rebounds.

Cruz finished with 12 points as Montar added 10  and Fernandez chipped in nine. The rest of the scorers for the Saints were Garrity (8), Olea (6), Lopez (6) and McNutt 3.

The Saints next play in an out-of-bracket game at the Bryan Ayer Classic in Lompoc on Saturday against Cabrillo at 9:30 a.m.

The Knights (1-3) earned their first win of the year, edging the Generals (0-3) in a San Luis Obispo Tournament game at Nipomo High School.

Down by five to start the fourth quarter, the Spartans (5-0) rallied for a win on the first day of the tournament at host Lompoc High School.

The win was the first for an Orcutt girls basketball team over Cabrillo.

“We held them to six points in the fourth quarter,” Spartans coach Tom Robb said in a text. “Our defense was fantastic the whole game.”

Grace Padilla scored 18 points for the Pirates, but the Panthers (3-3) snagged a win in this first-day tournament game.

The Spartans lost in their opening game at the Morro Bay Holiday Invitational Tournament on Thursday.
Elijah Stephenson had 19 points for Orcutt Academy, Camden Smith added 11 as Connor Adams Aidan Carroll chipped in nine and eight points respectively. The Pirates play Santa Ynez Friday at the tournament.
In other action, Arroyo Grande beat Santa Ynez 78-31 in their opener of the Morro Bay Tournament. Nate Rogers scored 10 points for Santa Ynez (1-3). Santa Ynez plays Orcutt Academy Friday at 5 p.m. at Morro Bay High School.
Gage Gomez had 24 points on 9-of-11 shooting for the Eagles as Robert Hutchens added 18 and Michael Atherton had eight.

Mariah Lopez scored 21 points and the Spartans (22-4, 10-0) put the wrap on a perfect Ocean League campaign.

Marc Cabileza made two free throws to put the Panthers ahead 67-63 with 20.2 seconds left in overtime, all but icing the win for PV. The Panthers went on to a 70-65 overtime Ocean League win over crosstown rival Santa Maria in front of a big and loud crowd on the Panthers’ Senior Night at Pioneer Valley.

Playoff brackets for boys and girls soccer and girls water polo were released Saturday by the CIF Southern Section.

In a game that would decide the Mountain League championship chase, Santa Maria and San Luis Obispo were knotted up in a scoreless tie until the 10th minute of the second half. That's when the Tigers went ahead 1-0 on an improbable own goal from more than 20 yards out.

Marc Cabileza made two free throws to put the Panthers ahead 67-63 with 20.2 seconds left in overtime, all but icing the win for PV. The Panthers went on to a 70-65 overtime Ocean League win over crosstown rival Santa Maria in front of a big and loud crowd on the Panthers’ Senior Night at Pioneer Valley.

There were three made baskets in overtime in this one, and St. Joseph junior forward Sam Bazenga made them all.

He also made the defensive play of the game, blocking Arroyo Grande star Gage Gomez's desperation 3-point try as time ran out in overtime. The Knights edged the Eagles 67-64 in front of a loud, capacity crowd at St. Joseph's Hofschulte Gym Friday night, tagging Arroyo Grande with its first Mountain League loss this season.

Orcutt Academy's Mariana Chavez (10) keeps the ball from St. Joseph's Avery Nelson on Wednesday. Chavez scored and assisted on another goal Thursday in the Spartans' 5-2 win over Righetti.