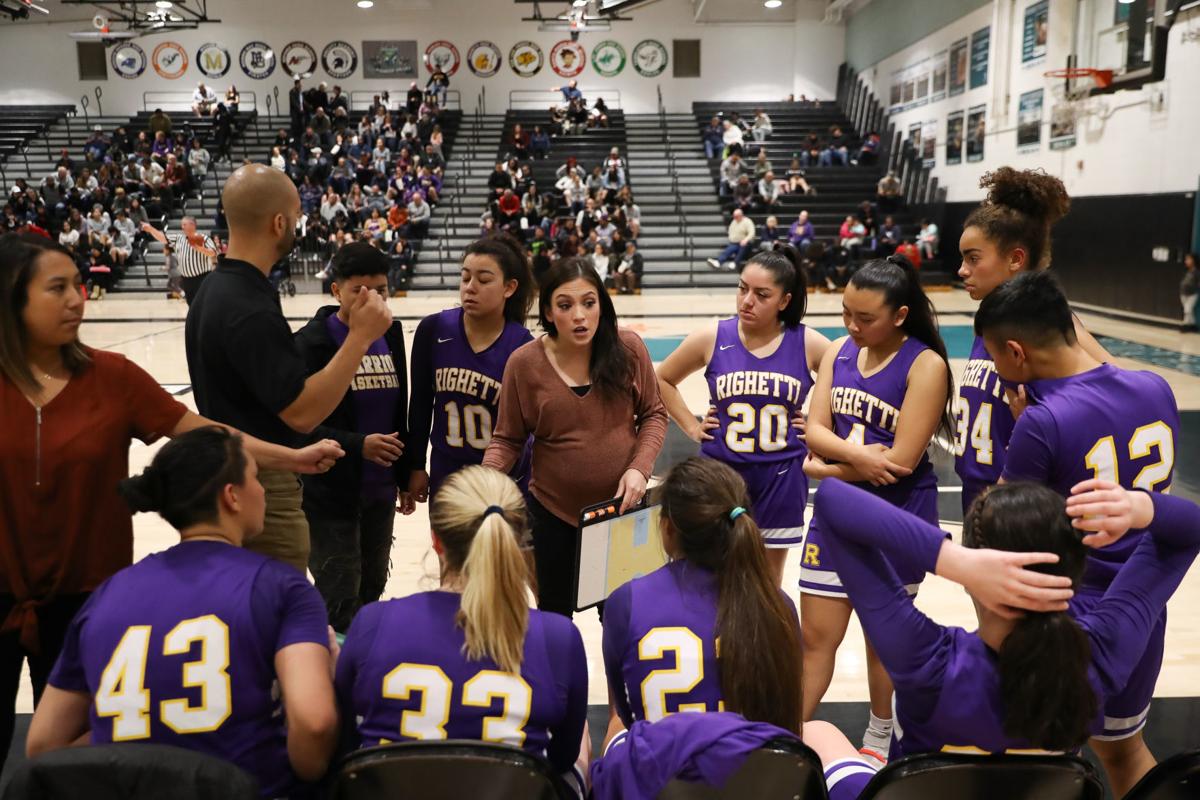 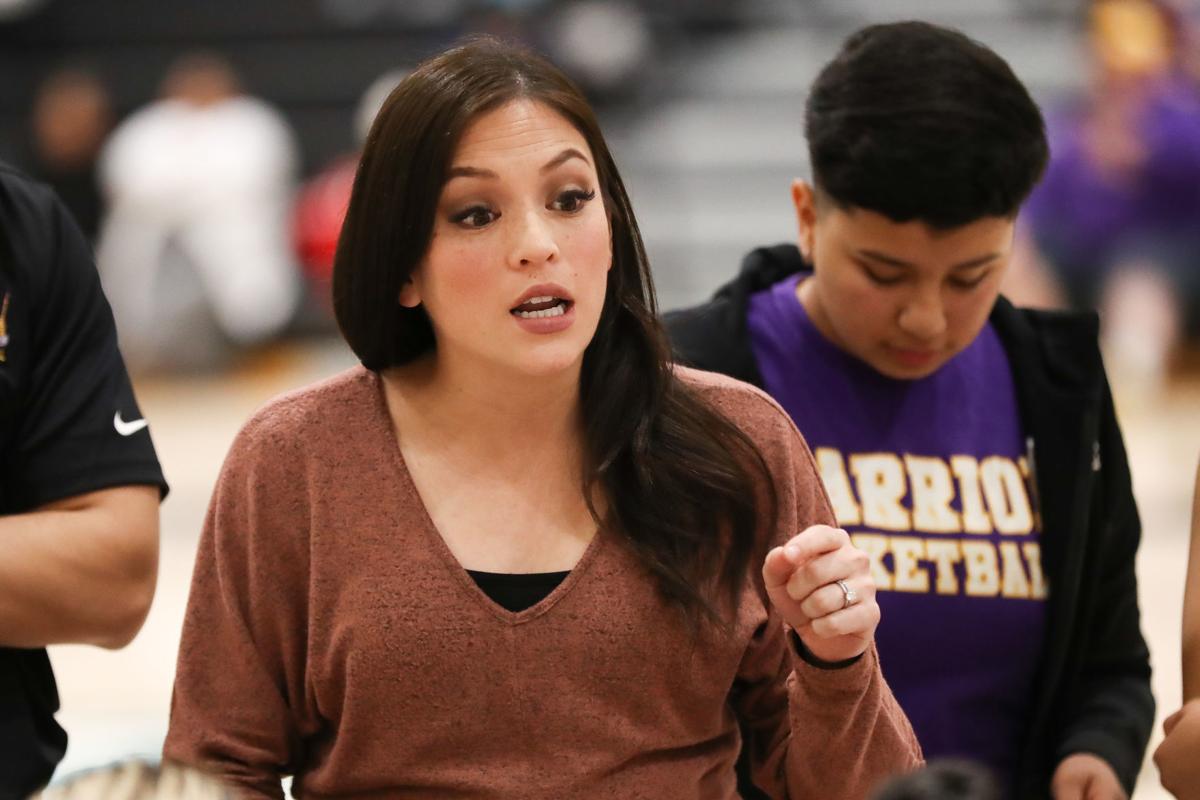 Righetti head coach Desiree Hitch calls out instructions to her players during a Mountain League game Saturday night at Pioneer Valley. Hitch coached her Warriors to her 101st victory that night after she got her 100th win the night prior at Mission Prep. Hitch's Warriors are 14-2 on the season and have a big game Tuesday night against Arroyo Grande. 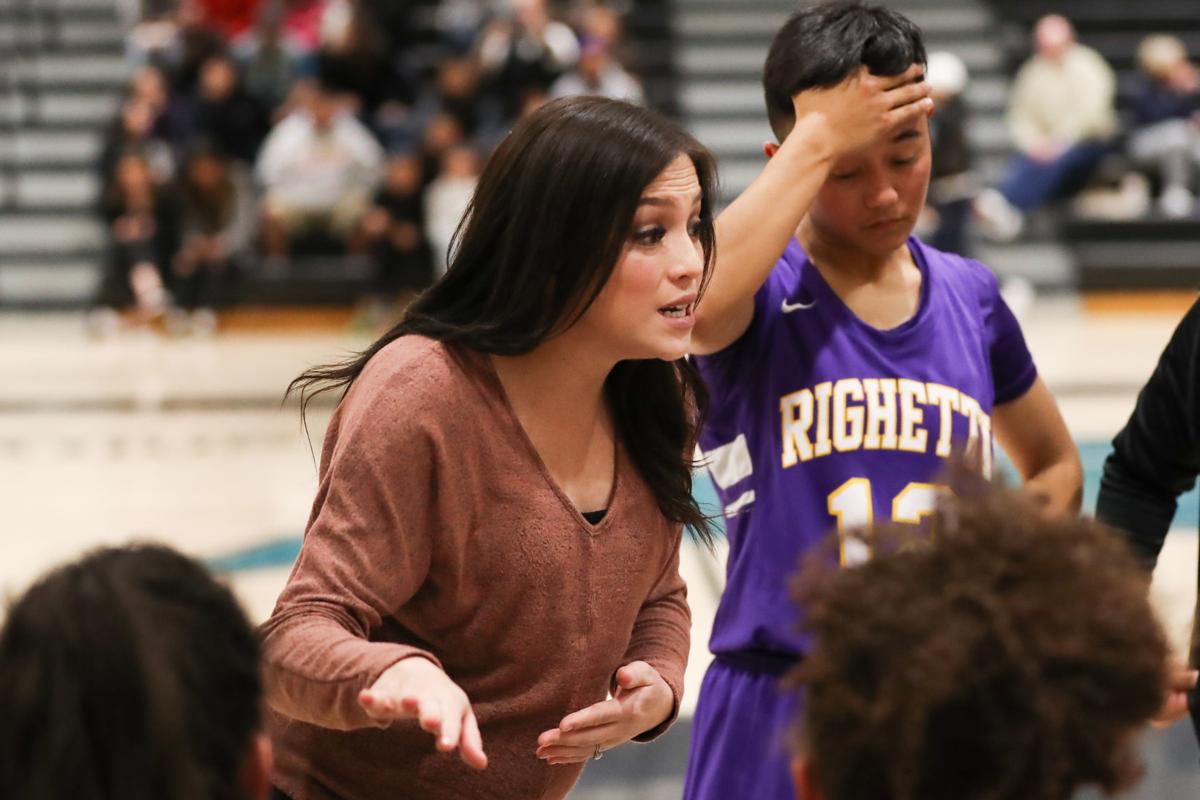 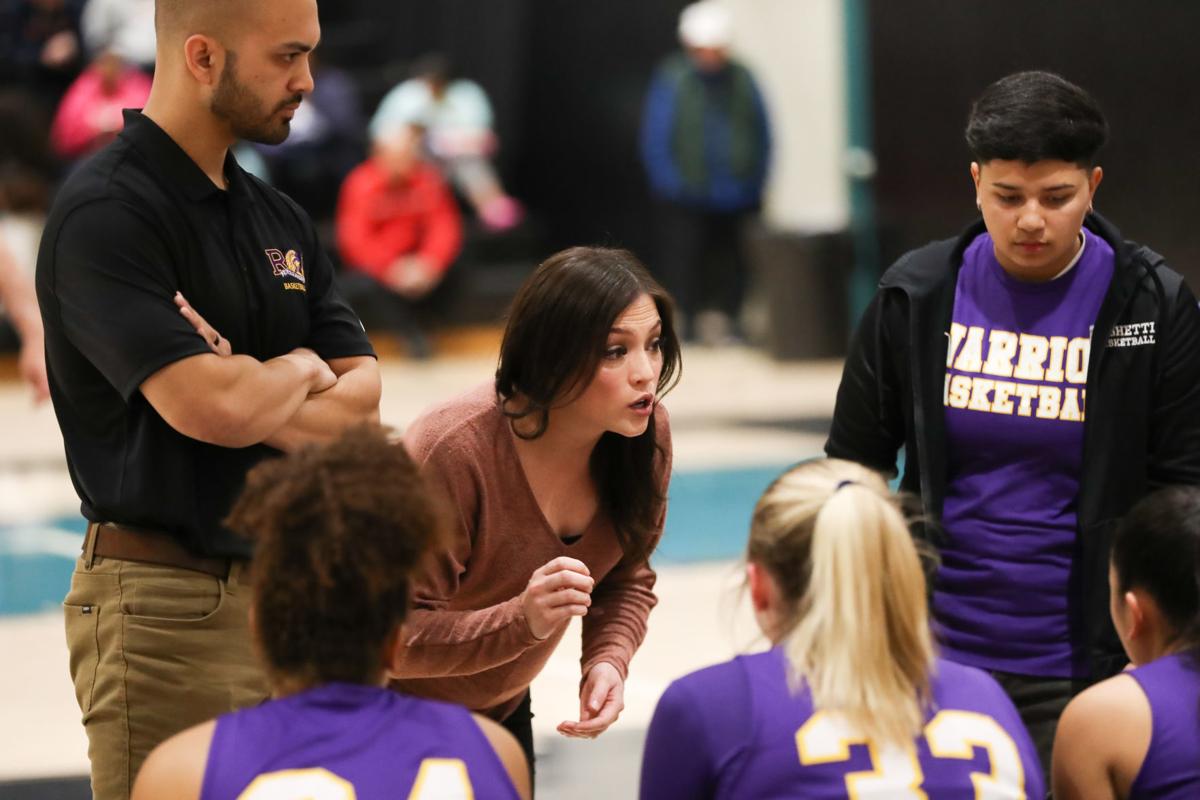 When the then-Desiree Domingues took over in 2015 as coach of the Righetti girls basketball team she used to play for, the team had been through four coaches in the previous four seasons.

The Warriors had not been to the playoffs since 2012.

Since the now-Desiree Hitch became the team’s coach the Warriors have been to the playoffs the past four years, won an outright league championship (with 14-0 league campaigns both times) twice and earned one co-league championship, in Hitch’s first year.

The fifth-year Righetti coach, a four-time league Defensive Player of the Year there before she graduated in 2008, earned her 100th coaching win at Righetti when the Warriors won 55-40 at Mission Prep Friday night.

Photos: Desiree Hitch, who just got her 100th victory at Righetti last week, over the years

Besides coaching at her alma mater, Hitch is also a special education teacher there.

All four players were a big part of Righetti’s past league championship teams. Estorga plays for Biola, Sheckherd plays for Sonoma State, and Reynoso plays for Cal State Monterey Bay.

Righetti’s overall marksmanship on foul shots was an unimpressive 13-for-20.

Alijah Paquet is having a solid freshman season for the Hancock College women’s squad. Her younger sister, Alex, is a starter for Hitch.

Hitch is now 101-25 all time as Righetti's coach, winning over 80 percent of her games.

Hitch also expressed her appreciation for her current players, such as junior Malia Cabigon, a three-year starter for Hitch, whose current squad is 14-2, including 3-0 in the Mountain League.

Hitch’s assistant, Natalie Gruspe, has been with Hitch since her first year of coaching at Righetti. Hitch has said more than once how vital Gruspe is for her.

“She also watches the players’ body language when they come off the court. She lets me know who’s feeling down, who might need some encouragement.”

Hitch is not typically one of the more animated coaches on the Central Coast. Still, “Natalie’s the calm one,” Hitch said with a chuckle. “I’m the yeller.”

The Warriors had an awful first half of shooting Saturday night and trailed  most of the way before nailing the win by making all of their last six free throws.

Former RHS standout Domingues to coach at her alma mater

Desiree Domingues did a lot of big things for Righetti High School's girls basketball program as a player.

When she was asked afterward if an emotional letdown by her team after getting Hitch’s 100th win for her played into the squad’s rough shooting night, Hitch demurred.

“I think it was just (the effect of) playing two league games in two nights,” she said. This is the first year Mountain League teams (though not every week) play a Friday-Saturday league schedule.

Hitch and her husband, Dominic, are expecting their first child. “The due date is March 27, after the season,” she said with a smile earlier.

“Natalie has some a good job of keeping me calm, and my husband has helped a lot.”

After a 13-10 2018-19, Hitch’s lowest season win total at Righetti (her teams had won more than 20 games in each of her first three seasons), the Warriors have gotten the job done this year with a tough man-to-man defense.

“I’ve just been really fortunate to get the program I did,” said Hitch.

Photos: Desiree Hitch, who just got her 100th victory at Righetti last week, over the years

Domingues signs to soar with Eagles

Eagles grind out a win

The first Round Table luncheon of the new year featured two first-time Athlete of the Week winners on Monday.

Righetti head coach Desiree Hitch calls out instructions to her players during a Mountain League game Saturday night at Pioneer Valley. Hitch coached her Warriors to her 101st victory that night after she got her 100th win the night prior at Mission Prep. Hitch's Warriors are 14-2 on the season and have a big game Tuesday night against Arroyo Grande.