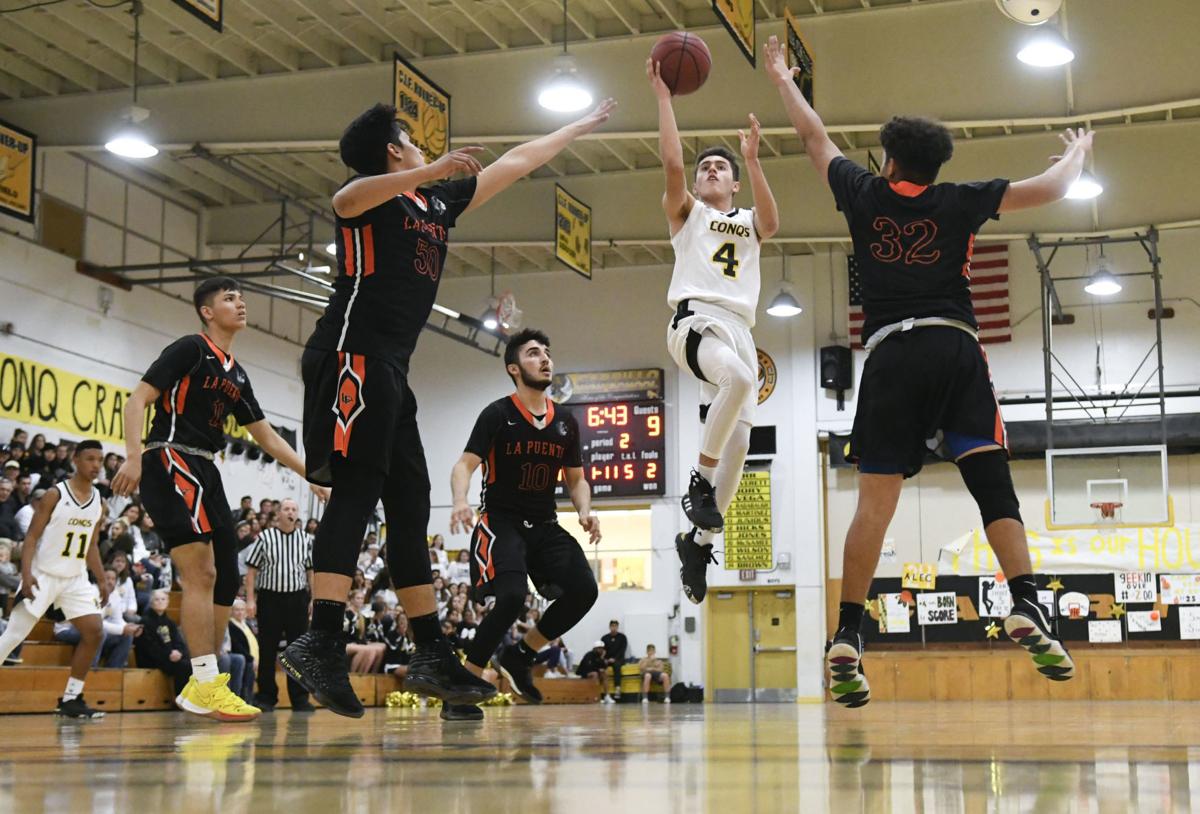 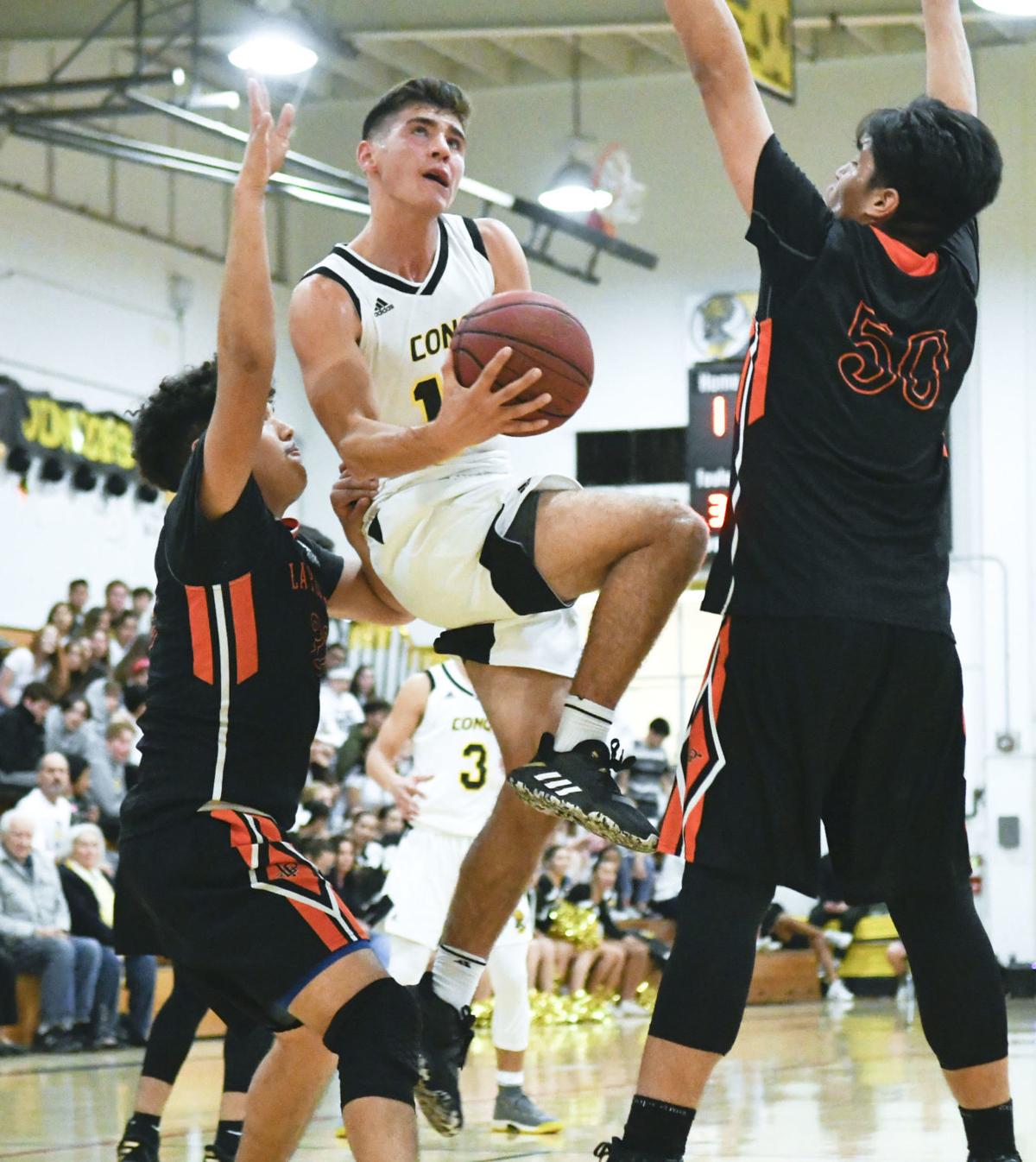 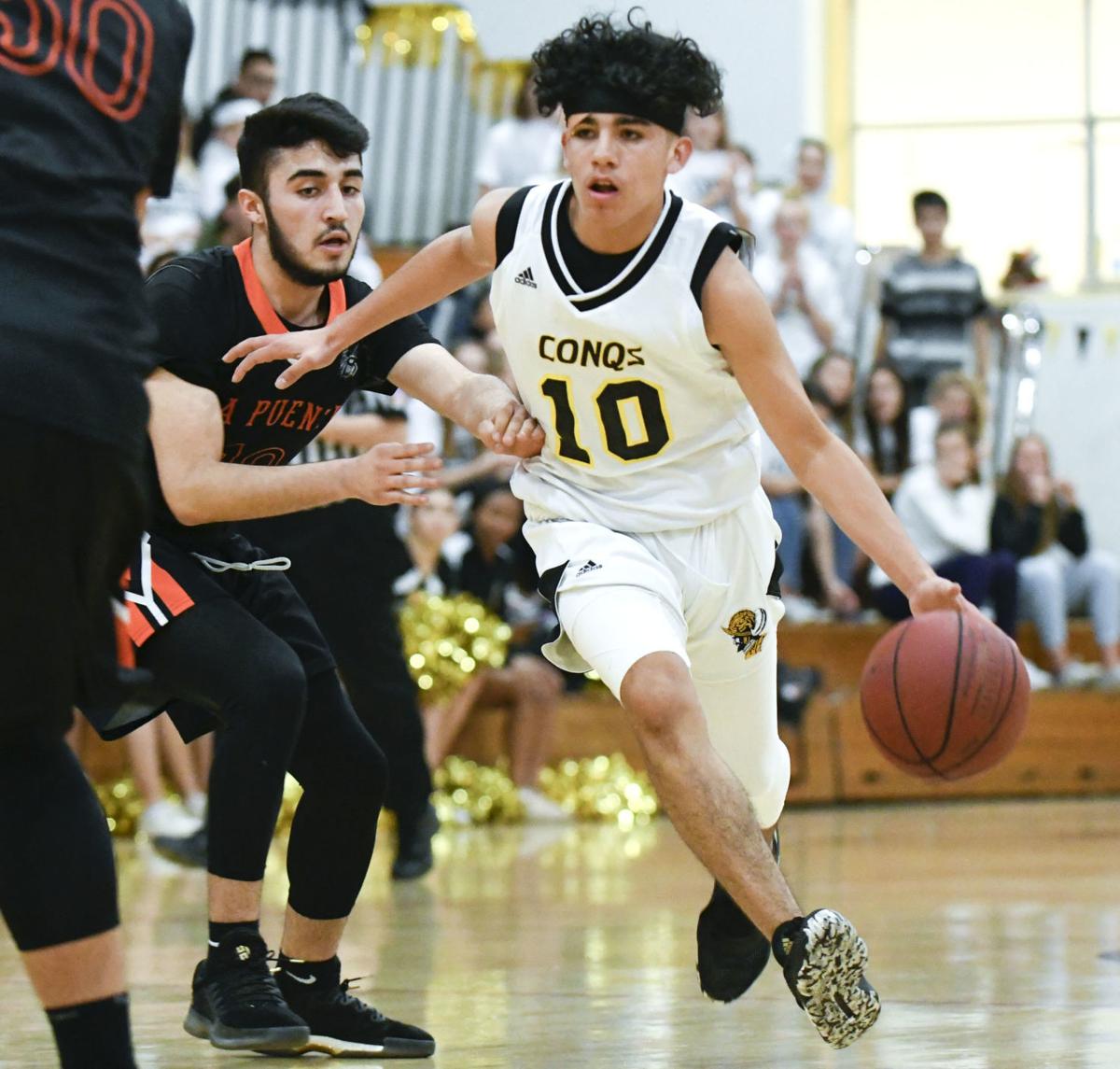 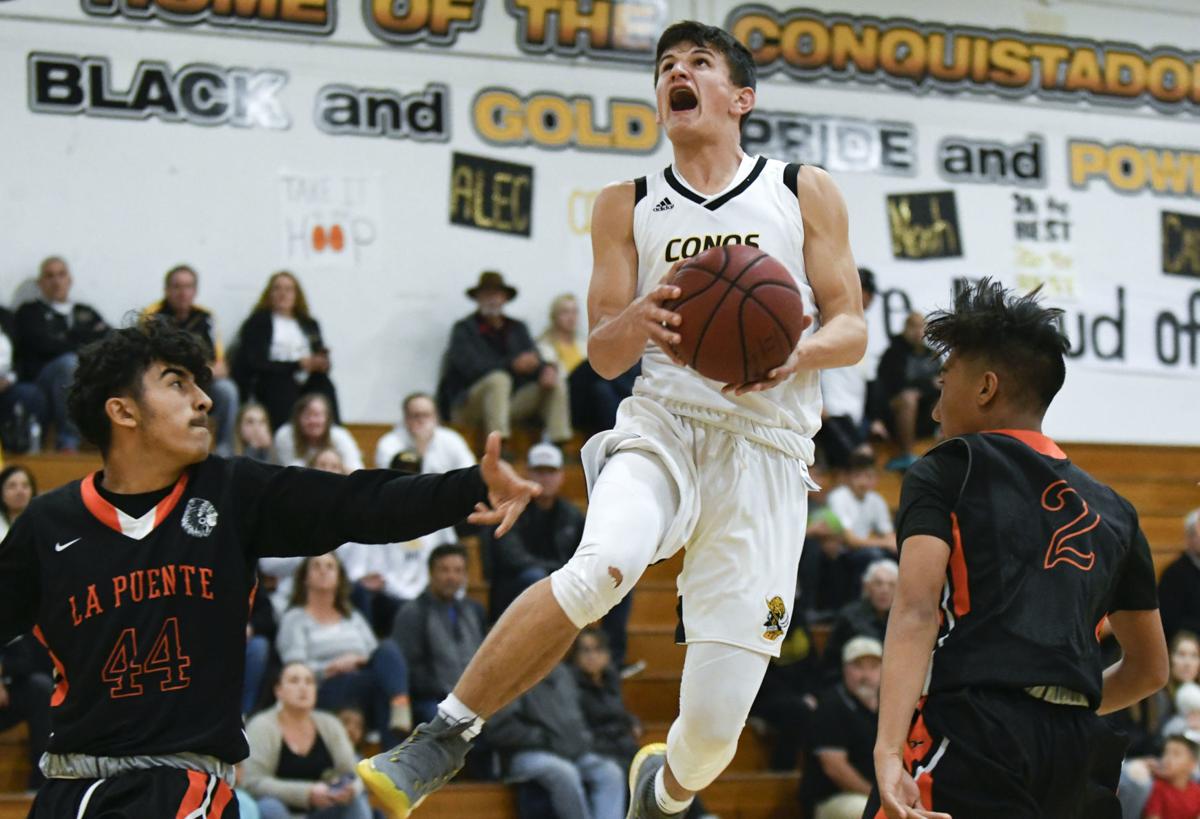 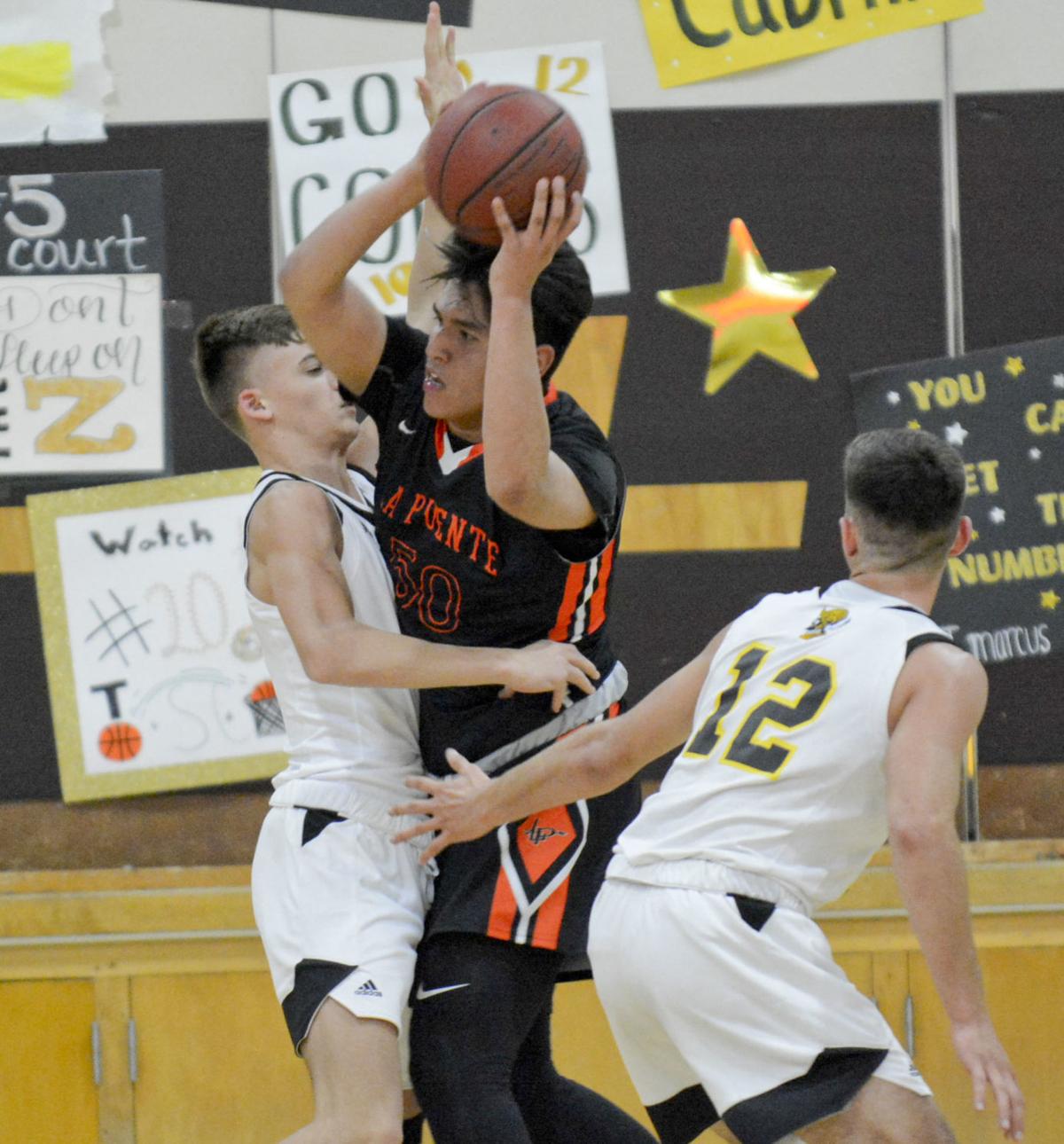 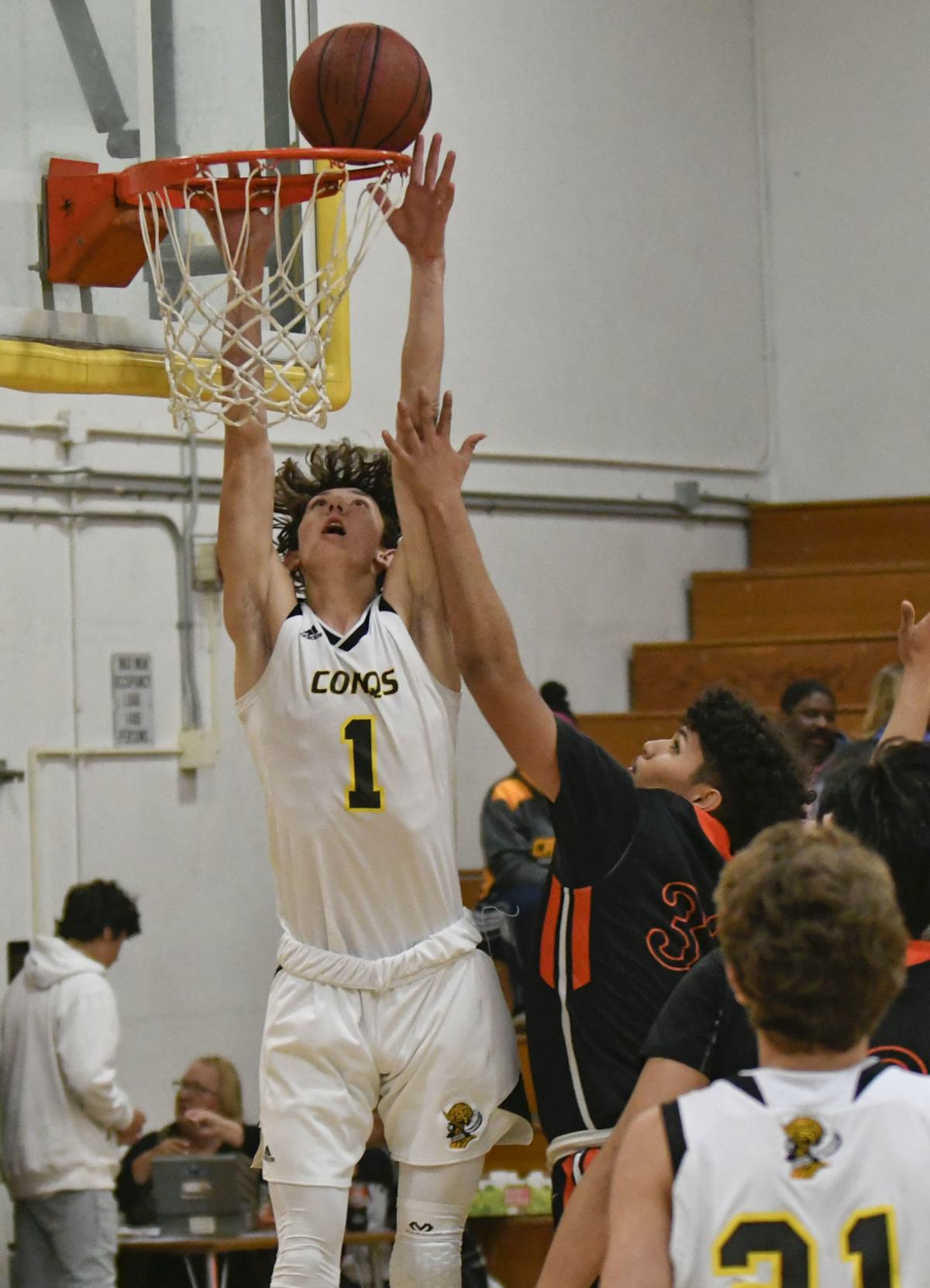 The Conqs scored even more in their second playoff game Friday.

After they turned a nine-point early third-quarter deficit into a 34-29 lead to start the fourth quarter and kept enough of it to edge La Puente 44-41 at Cabrillo in the first round of the CIF Southern Section Division 4A boys basketball playoffs on Wednesday, Cabrillo routed Camarillo Beacon Hill 51-31 in the second round of the playoffs.

On Wednesday, Cabrillo trailed 20-15 at halftime and 26-17 early in the third quarter. The Conquistadores (19-10) will play in the quarterfinal round Tuesday night.

Cabrillo will play Lancaster Eastside, which defeated South El Monte Friday night 67-62 at South El Monte. A coin flip determined the site of Tuesday's quarterfinal game will be at Eastvale.

Photos: Cabrillo gets past La Puente in first round

Against La Puente, Alec Brown scored what would be the winning point when he made the second of his two foul shots to put the Conqs ahead 42-39 with 2:05 to play.

Lorenzo Martinez made two free throws to put the score at what would be the final count, 44-41. The Warriors still had a chance after a missed Cabrillo free throw with five seconds left, but a desperation, potential game-tying 3 didn't come close and time ran out.

Two other 3's the Warriors took to try to tie the game late also missed by wide margins.

After not finding any scoring play that consistently worked in the first half, the Conquistadores found one in the second. A Cabrillo ball-handler would get the ball out to Jonathan Jones just outside the key and Jones would connect with the cutter for a layup.

"We work on that play a lot in practice," said Brown, who led Cabrillo with 10 points and was one of just two players from either side who scored in double figures.

"We overload one side and when they over-play on defense, we get the ball back into the middle and go to the basket."

The score indicated that defense was what mainly won the game for the Conquistadores, and the facts bore that out. The Warriors missed a lot of off-balance shots.

"Yeah, our defense was the big thing for us," said Brown. The Conquistadores moved on despite missing a fair amount of off-balance shots themselves.

With the Conqs down 26-17, Kaje Sanchez got Cabrillo going when he connected on a 3.

Cabrillo finished the third quarter with a 13-2 run over the last 1:57, scoring all five times it had the ball during that span.

Jeremy Hicks scored after rebounding the second of two missed free throws, Adam Wilson made a layup off a pass from Jones, Sanchez knocked home a 3 then completed an old-fashioned  three-point play after another good pass from Jones, and Jones made a trey.

Cabrillo stayed ahead. After making two 3's in the first half, the Conquistadores made four in the second. That, combined with some tough defense, helped Cabrillo advance.

In other area basketball playoff action, South Pasadena defeated Dunn 77-48 in another 4A first-round game.

Aly Beebe, St. Joseph's 6-foot-3 standout junior center, made 11 of her 14 foul shots. Knights senior guard Brianna Bognuda went 10-for-14 on free throws. Kelsi English took four foul shots and made all four. Kim Richie was 2-for-4 at the line as the Knights won 53-42 over Bishop O'Dowd.