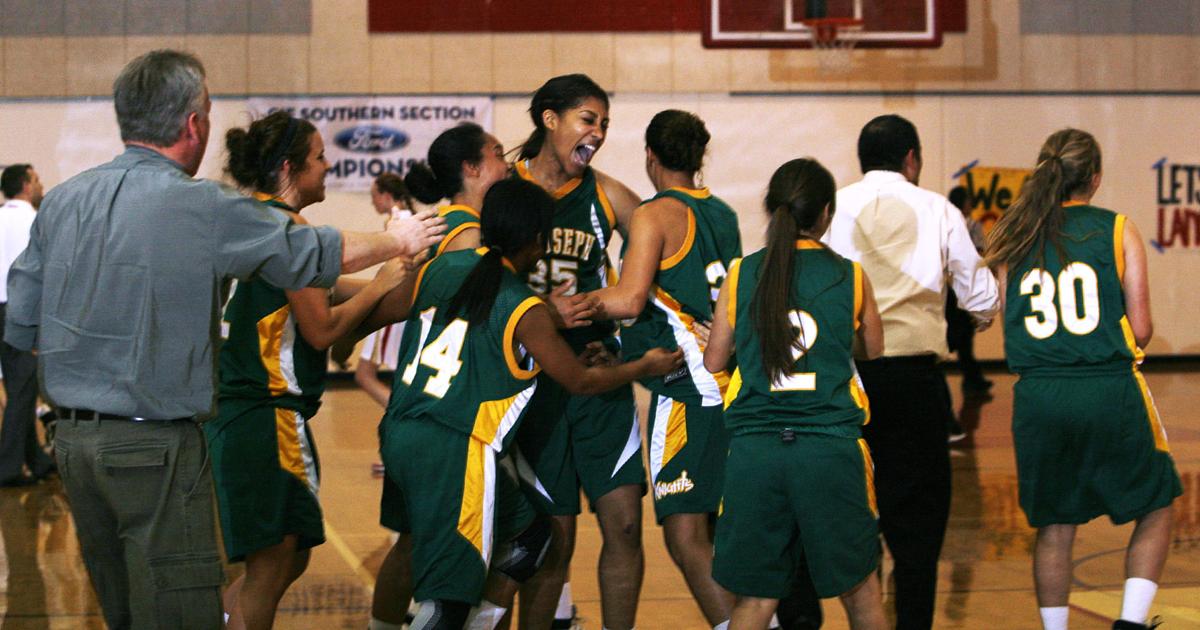 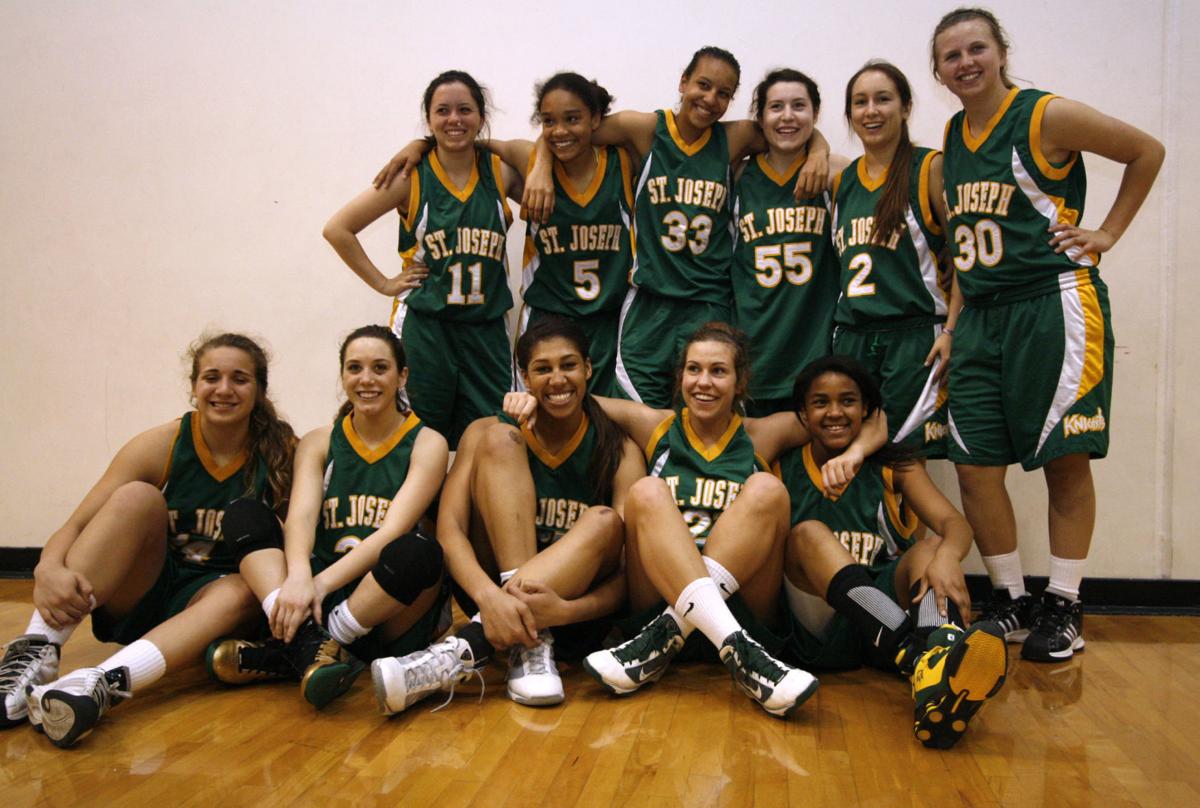 The St. Joseph Knights girls basketball team poses for a group photo after beating Orange Lutheran 54-50 in the CIF state semifinals in March of 2011. 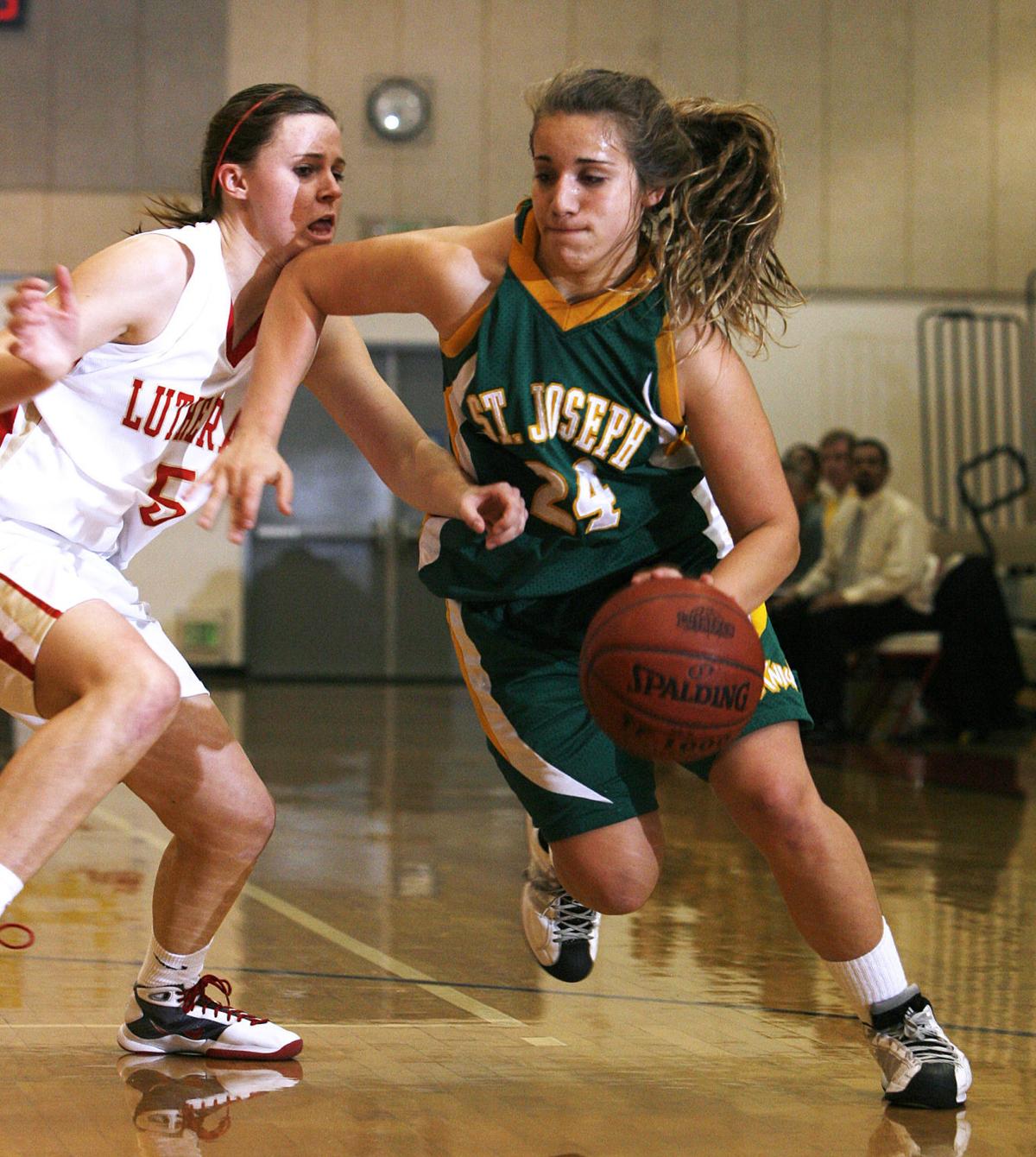 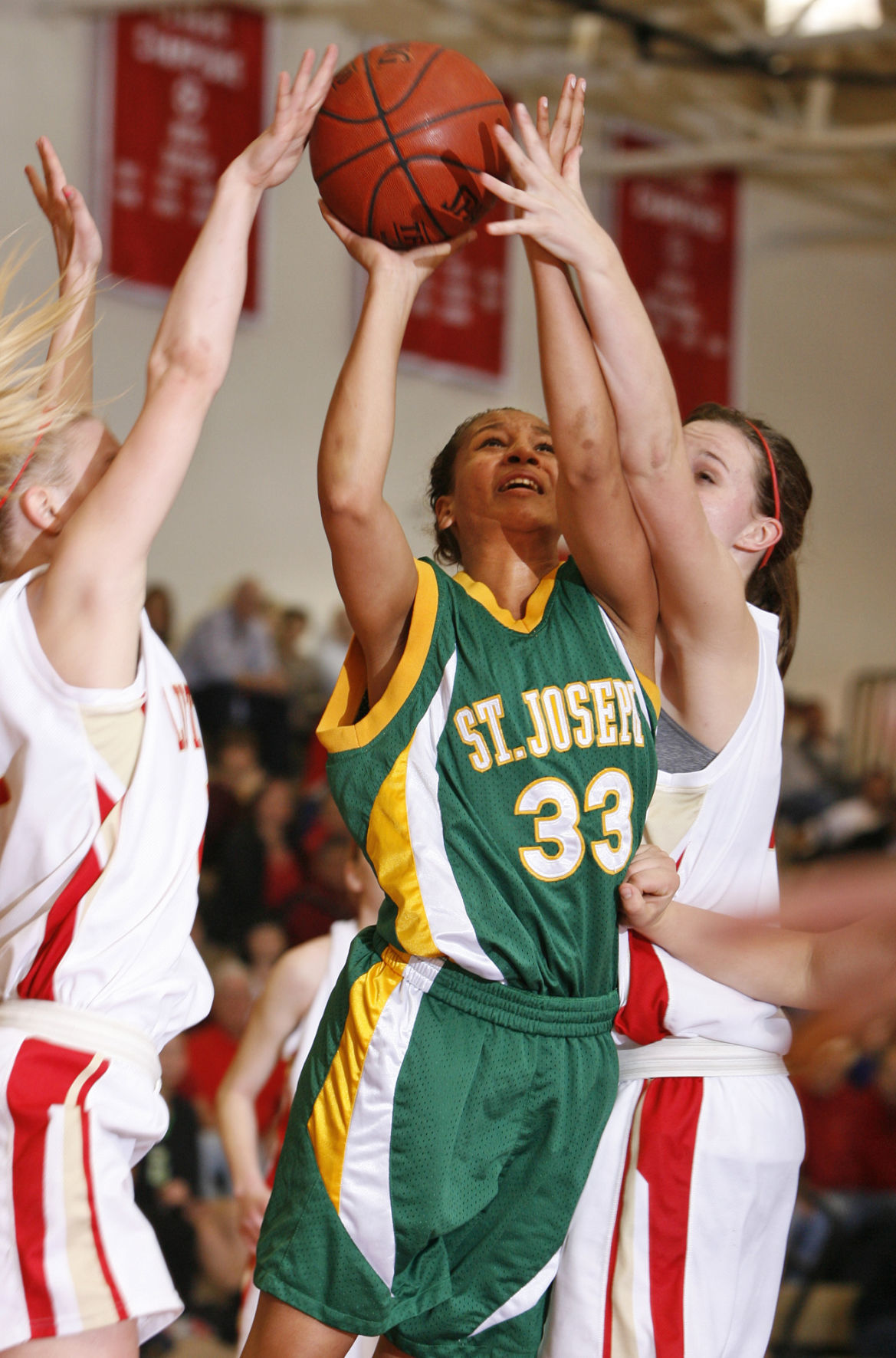 St. Joseph guard Tatiana Dunlap goes up for a basket in the 54-50 victory over Orange Lutheran in the CIF state semifinals in 2011.

Going in, both teams had nearly equal state rankings. Orange Lutheran was seeded second in the Southern regional. St. Joseph was seeded third.

St. Joseph had won handily twice in the regional after losing 66-58 to Gardena Serra in the CIF Southern Section 3AA title game. Orange Lutheran won the CIF-SS 3A championship.

The Lancers opened an early lead, but the Knights, led by Beebe inside, eventually passed them and took an 18-11 lead into the second quarter. St. Joseph led 33-26 at halftime.

In the second half, Beebe was plagued by what had suddenly beset her the past few games — foul trouble. St. Joseph coach Ed Torres had expressed puzzlement sometime earlier as to why fouls were suddenly being called on Beebe more frequently.

The Lancers kept coming, but the Knights hung in. Reserve Kim Ritchie hit a timely basket near the end of the third quarter to put St. Joseph ahead 43-35.

Orange Lutheran closed the quarter on a 5-0 run and ultimately tied the game at 43-all in the fourth. Then the Knights, who made just half of their 26 free throws, buried some foul shots at some of the most crucial times.

Orange Lutheran managed to keep the game a halfcourt one rather than the faster pace the Knights preferred, and Karr helped the Lancers stay in contention. However, St. Joseph had enough to win.

English shot just 5-for-17 from the field, but she made enough shots to lead the Knights in scoring with 16 points. Even with the foul trouble Beebe, with 14 points and 14 rebounds, notched another double-double. Dunlap finished with nine rebounds.

St. Joseph's win put the Knights in the SoCal final against Serra at USC.

Beebe tore an ACL during club ball later that summer and had to miss her senior year of sports. She subsequently signed with Stanford but ultimately had to medically retire from basketball after another knee injury.

We are hitting the rewind button to look back at St. Joseph's historic run to a CIF State championship in 2011. The Knights girls basketball team rebounded from a tough loss in the Southern Section final to run through the state playoffs. Things got interesting for St. Joseph on March 12, 2011 in a CIF State semifinal game against Orange Lutheran.

The St. Joseph Knights girls basketball team poses for a group photo after beating Orange Lutheran 54-50 in the CIF state semifinals in March of 2011.

St. Joseph guard Tatiana Dunlap goes up for a basket in the 54-50 victory over Orange Lutheran in the CIF state semifinals in 2011.