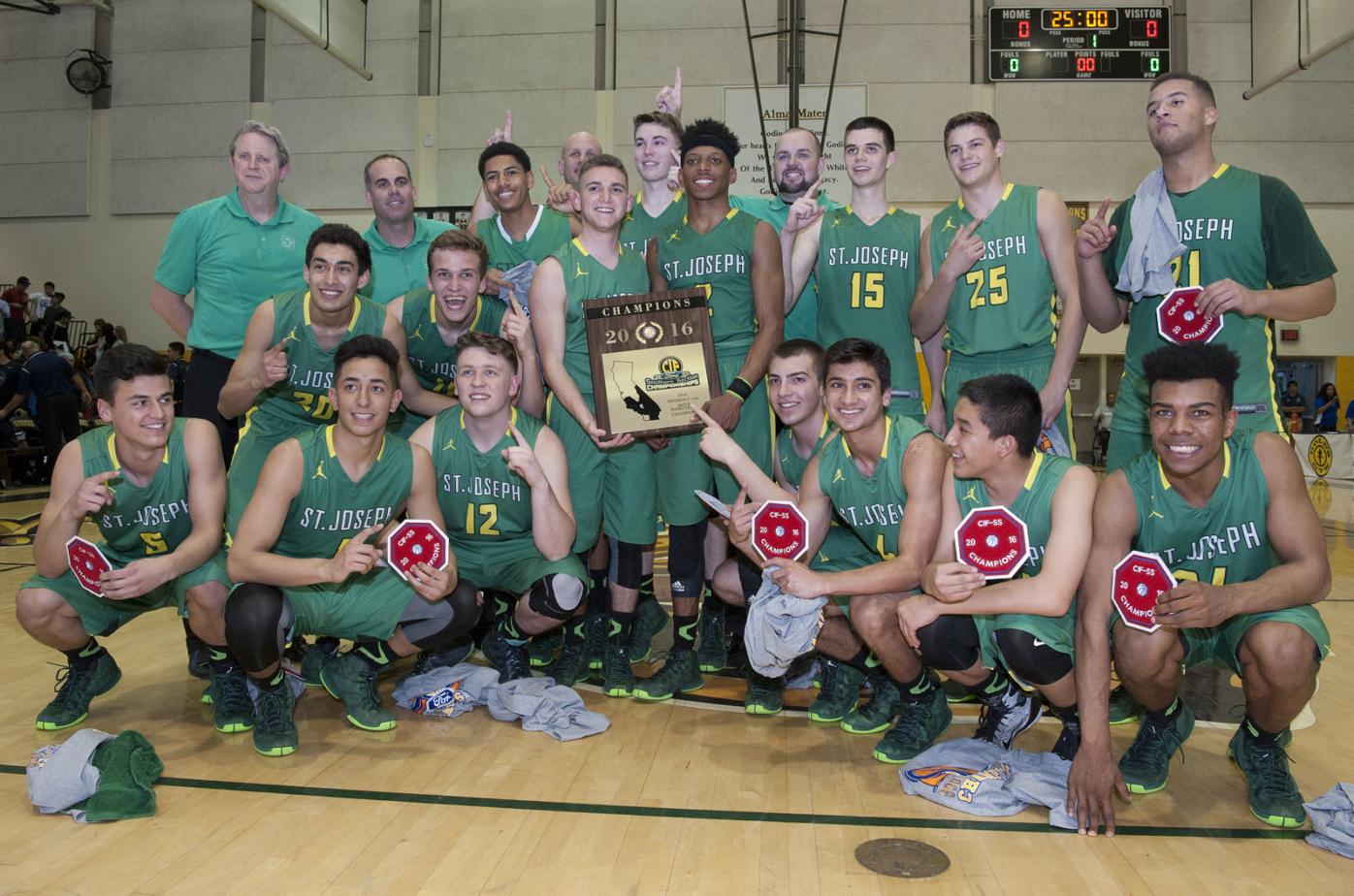 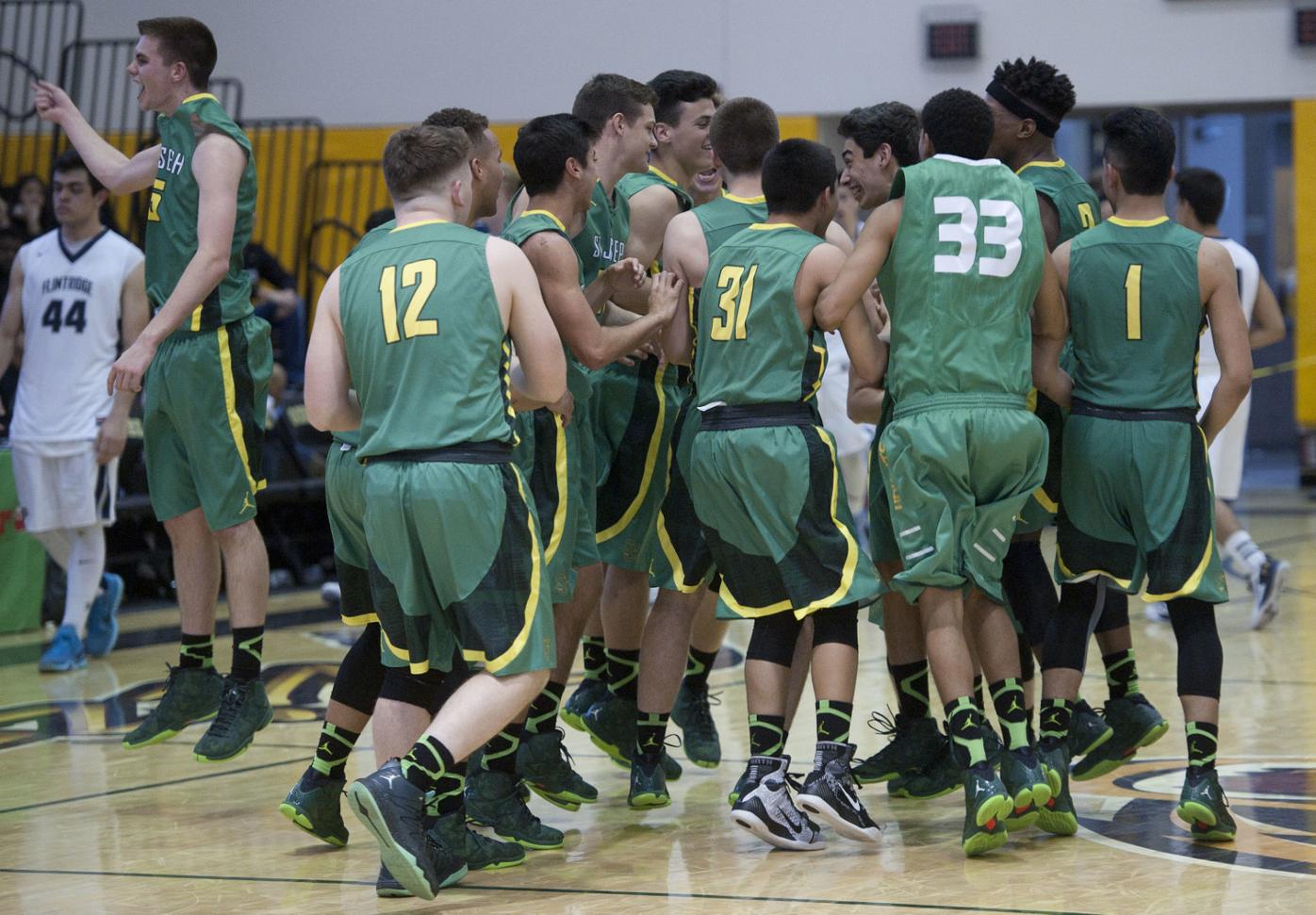 CIF basketball titles aren't easy to come by on the Central Coast.

The area is usually at a disadvantage competing against the larger talent pools in Southern California.

This is another in a series we are putting together commemorating the top moments of the past 20 years. Today, we take a look at St. Joseph High School's run to a CIF basketball title in 2016.

That's what occurred for the St. Joseph High School basketball team during the 2015-16 season.

The Knights had the right mix of talent, with star guard JoJo Walker in backcourt and forward Gabrys Sadaunykas in the front. Scotty McBeth added an adept scoring touch for the Knights. Cristian Rubalcaba was an aggressive defensive-minded point guard. Mason Jones was the extra muscle down low and Colton Brickey could be counted upon to make a big bucket in a tight spot.

Those players combined to power the Knights to the CIF Southern Section Division 5AA title in March of 2016. The Knights cruised past La Canada Flintridge Prep for the title in a game played at Godinez High in Santa Ana.

The victory gave the Knights their first CIF title since 2004 and coach Tom Mott's first with the Knights.

In the title game, the Knights controlled the first 16 minutes and built up a 14-point halftime advantage. Then St. Joseph, the division's top seed, put the game away with a decisive second half, winning 63-45.

Every member of the squad had a hand in the championship win.

Walker, then a junior, led the Knights with 15 points. Sadaunykas, who was a senior, scored 14 points and grabbed 13 rebounds. McBeth poured in 14. Jones had nine points and Brickey added four.

“I think all the football coaches are hoping we can get back (to having workouts) by at least June,” Santa Maria coach Dan Ellington said in a text.

"It's unreal, we don't even know how to celebrate," McBeth said then. "...It's one of the greatest feelings in the world."

Walker said: "We just had to calm down and let the game came to us."

The player happiest with the title was undoubtedly Sadaunykas, who came to St. Joseph from Lithuania. He went on to play at Hancock College before transferring to Humboldt State last year.

With the spectator in full stride, Pioneer Valley linebacker Kenneth Hoobery took a step forward and flattened him.

"It feels great, we worked super hard the whole season, it was our goal and I'm just happy we made it," Sadaunykas said. "...It was amazing. I want to say a huge thanks to our fans who came out here. I'm thankful to everyone who came. The atmosphere was amazing. It was just easy to play with that energy."

The Knights won that game despite going cold in the second half. St. Joseph hit on 14-of-26 shots in the first and second quarters, but went just 8-for-28 after halftime. The Knights shot 40.7 percent for the game.

The last time St. Joseph won a Southern Section championship was in 2004, when the Knights beat St. Bernard under Ed Torres.

This group of Eagles, led by a strong senior cast, checked nearly every box: They won a league championship, qualified for the Open Division playoffs, then won a CIF State regional title and should've played for a state title.

Although the Knights won the title game by 18, they had to earn it in the second half as the Rebels tightened things up near the end of the third quarter, cutting the St. Joseph lead to 43-34 with about a minute left.

Walker sank a huge 3-point shot to give the Knights a boost for a 46-34 lead.

"JoJo loves taking the big shot," Mott said. "And when he makes it it elevates the whole team. Tonight he played like he's played all year. He's hit some big shots, shared the basketball and he's the leader you want your point guard to be."

RIVERSIDE — The St. Joseph boys basketball team overcame a long bus ride and a tough opponent and played itself into the CIF Southern Section …

After the Rebels failed to answer, the Knights needed another big shot to fully take back all momentum.

McBeth answered the bell, knocking down a 3 from the right corner. And just like that, the Knights' lead went from nine to 15.

"Scotty was huge, he's kind of an unsung guy, Joe and Gabrys get a lot of the credit, but Scotty is Mr. Consistency," Mott said. "He's out there every night, he defends, plays hard and he hits big shots."

Rubalcaba, who finished with five points and two assists in 23 minutes, said the Knights just did what they do best on that Saturday night in Santa Ana.

SANTA ANA — For the first time since 2004, members of the St. Joseph boys basketball team can call themselves CIF champions.

"Like I said before, we're going to go out here and fight and do what we do best and that's win," Rubalcaba said. "That's what we did and now we're CIF champions."

St. Joseph ended its title run with a 29-3 record before starting the state playoffs.