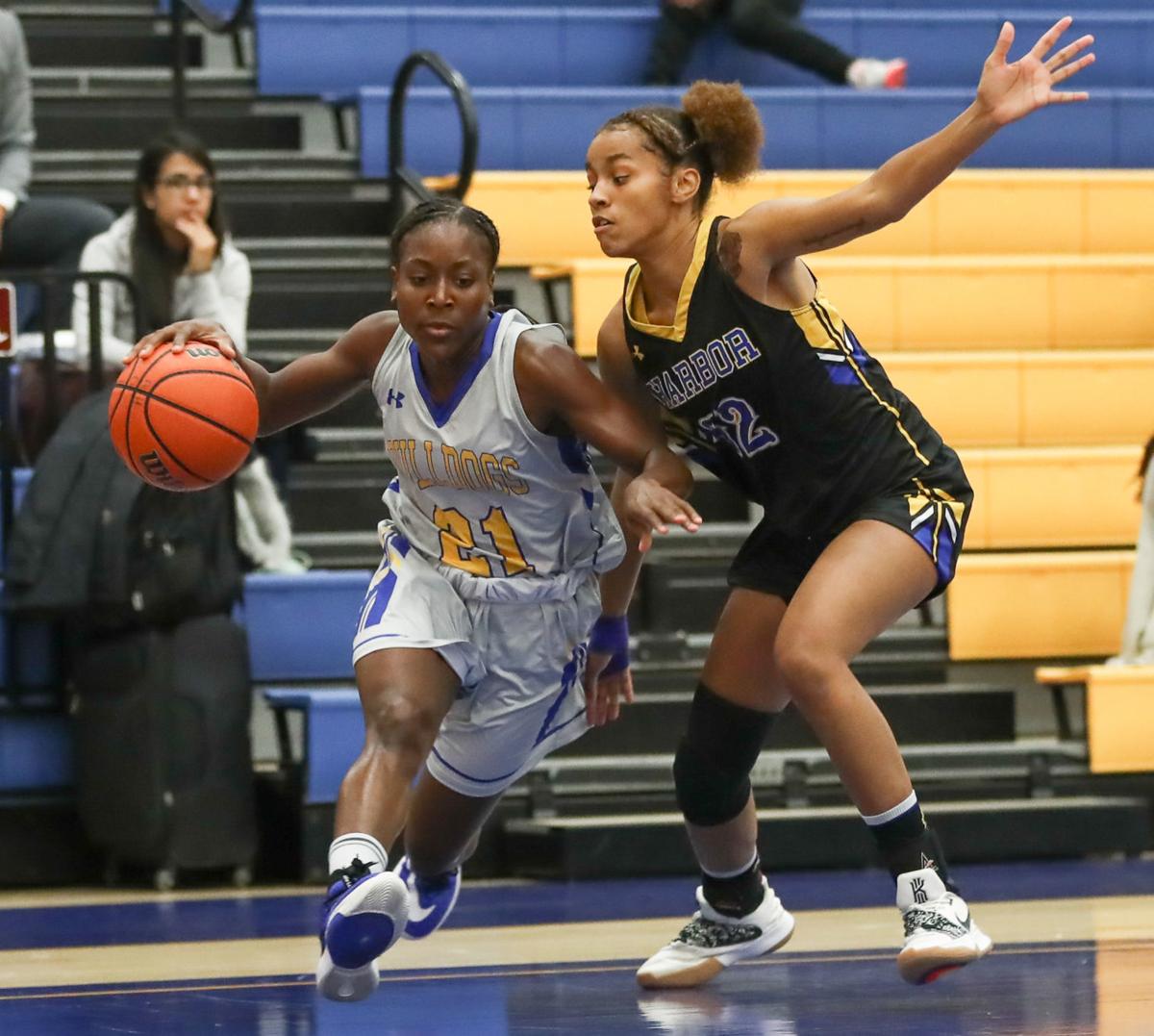 Hancock College's Milan McGary (21) drives past Monique Garrett (12) of L.A. Harbor during the Toys for Tots Classic in Santa Maria. 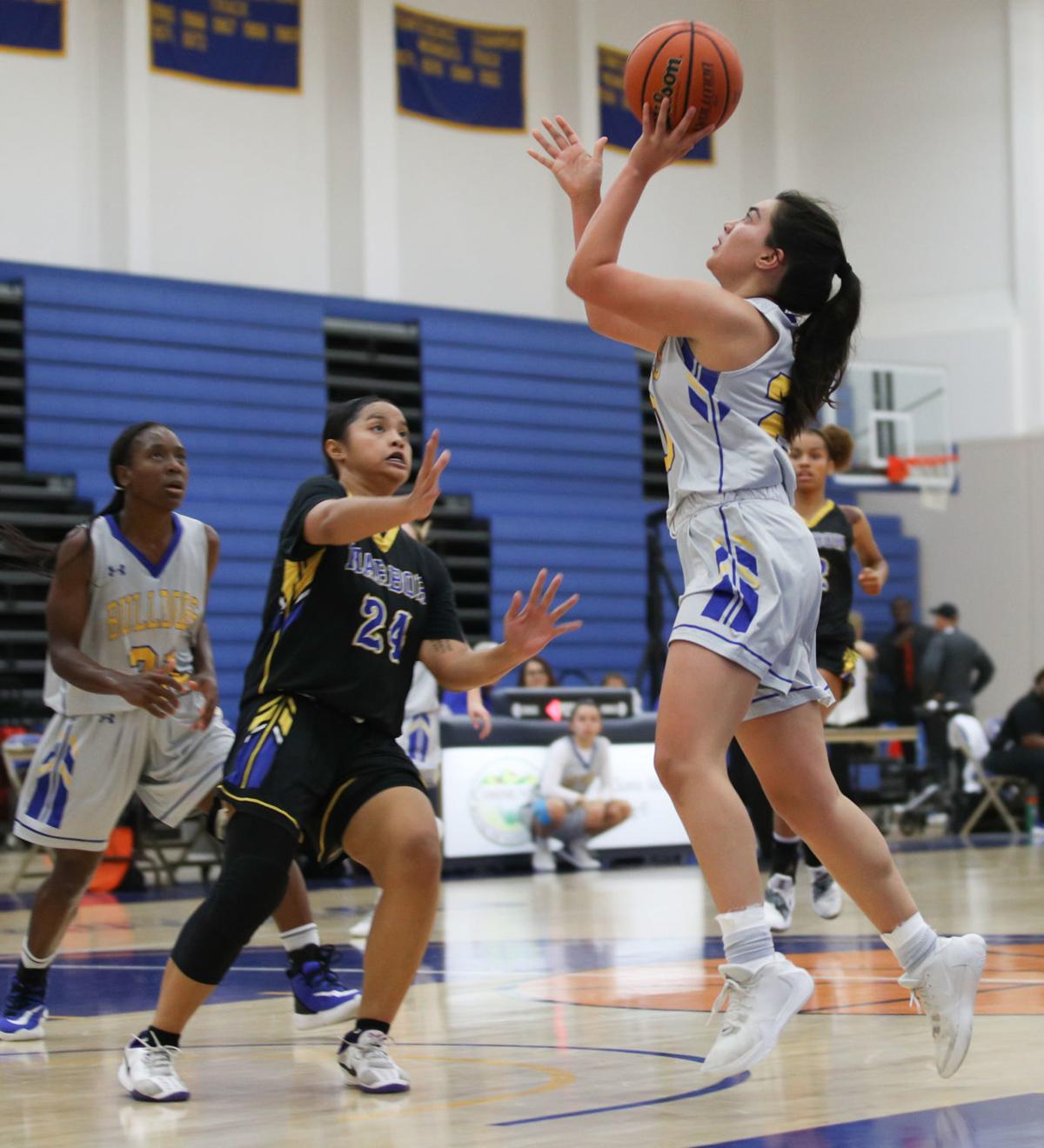 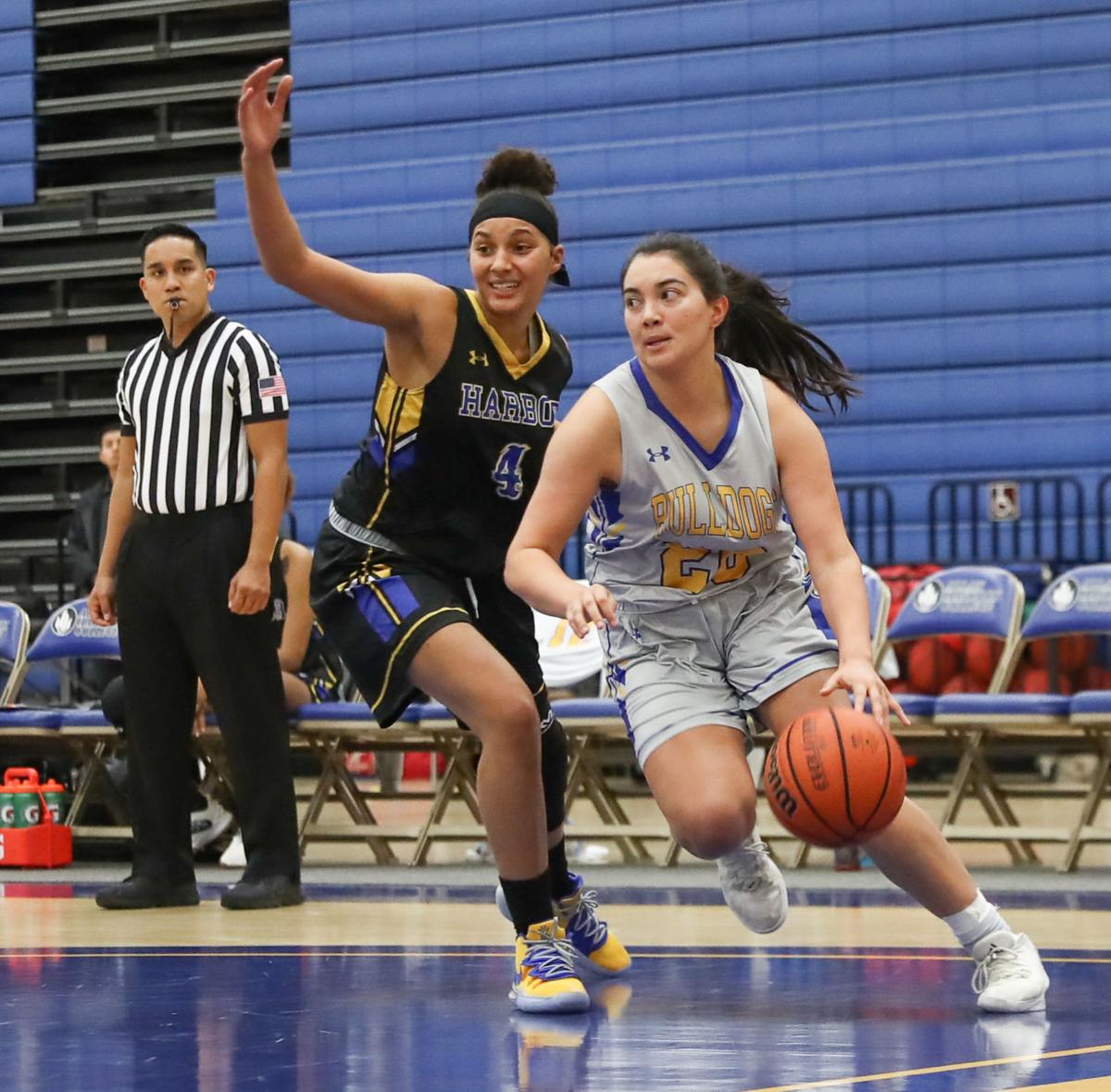 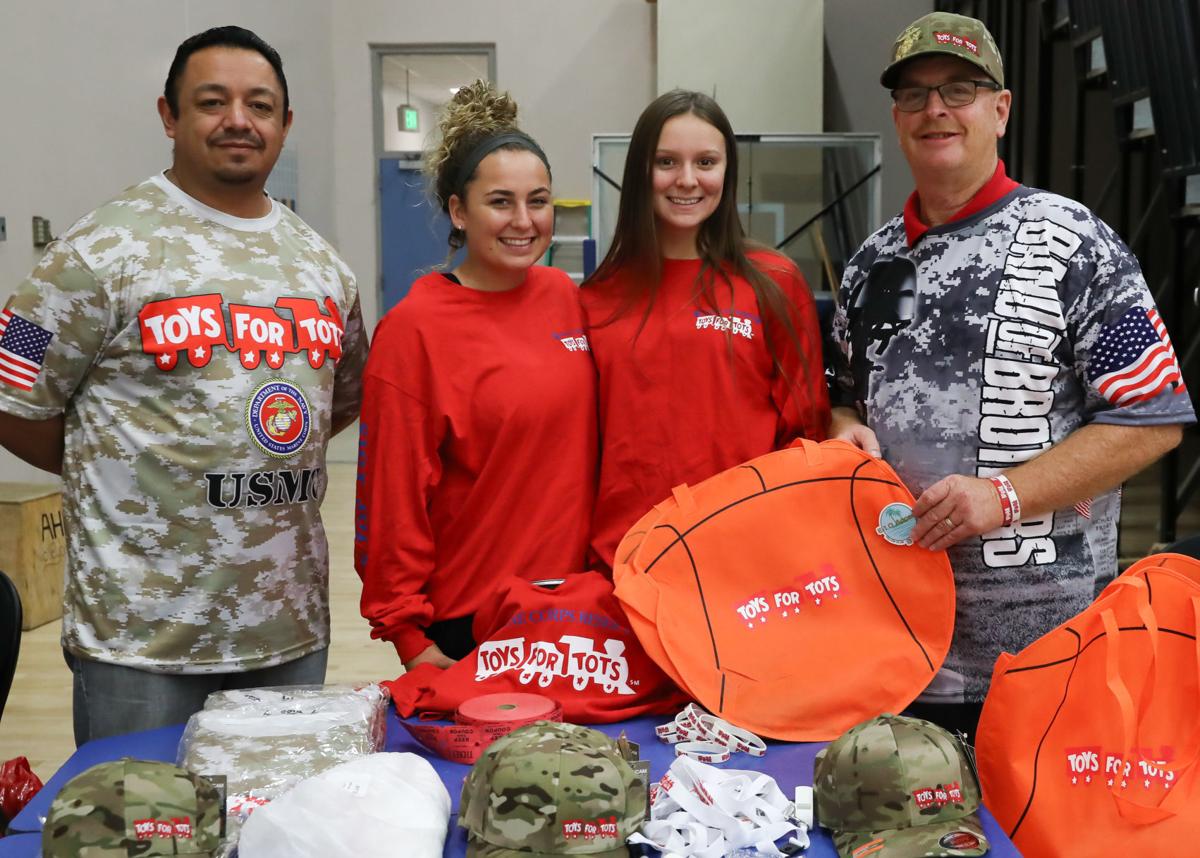 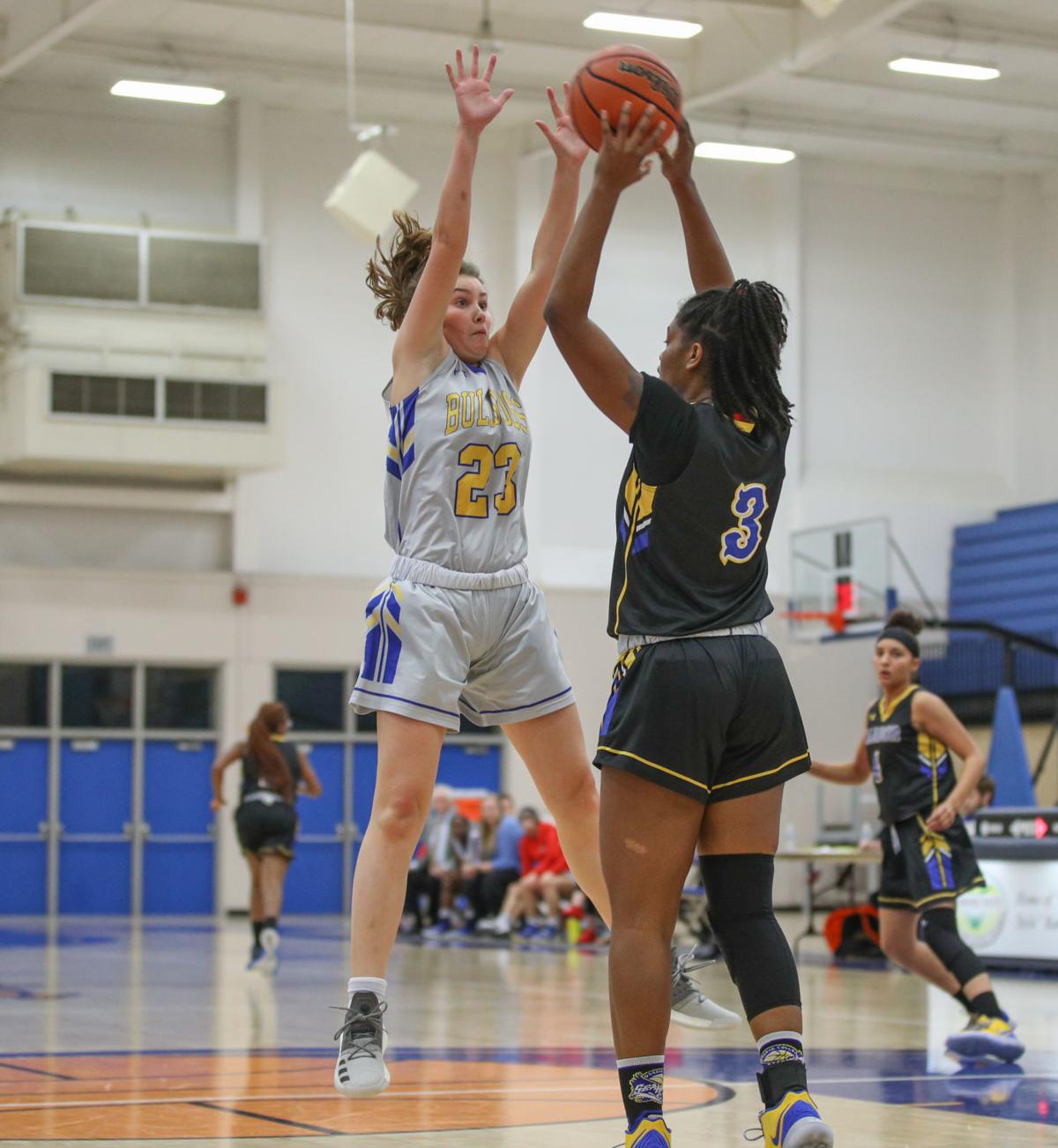 Hancock College's Jayci Bayne (23) elevates to defend an inbound pass during the Toys for Tots Classic in Santa Maria. 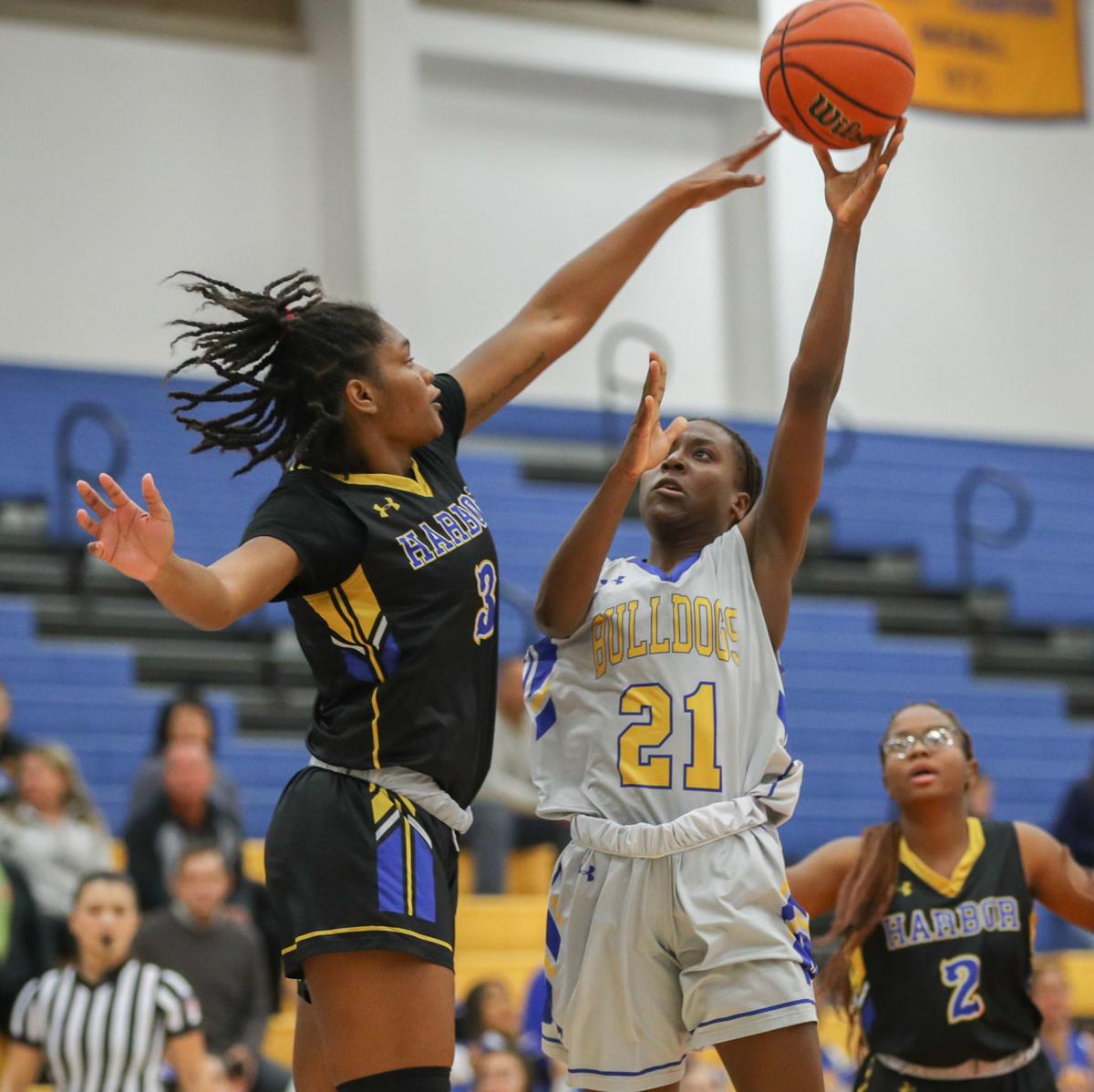 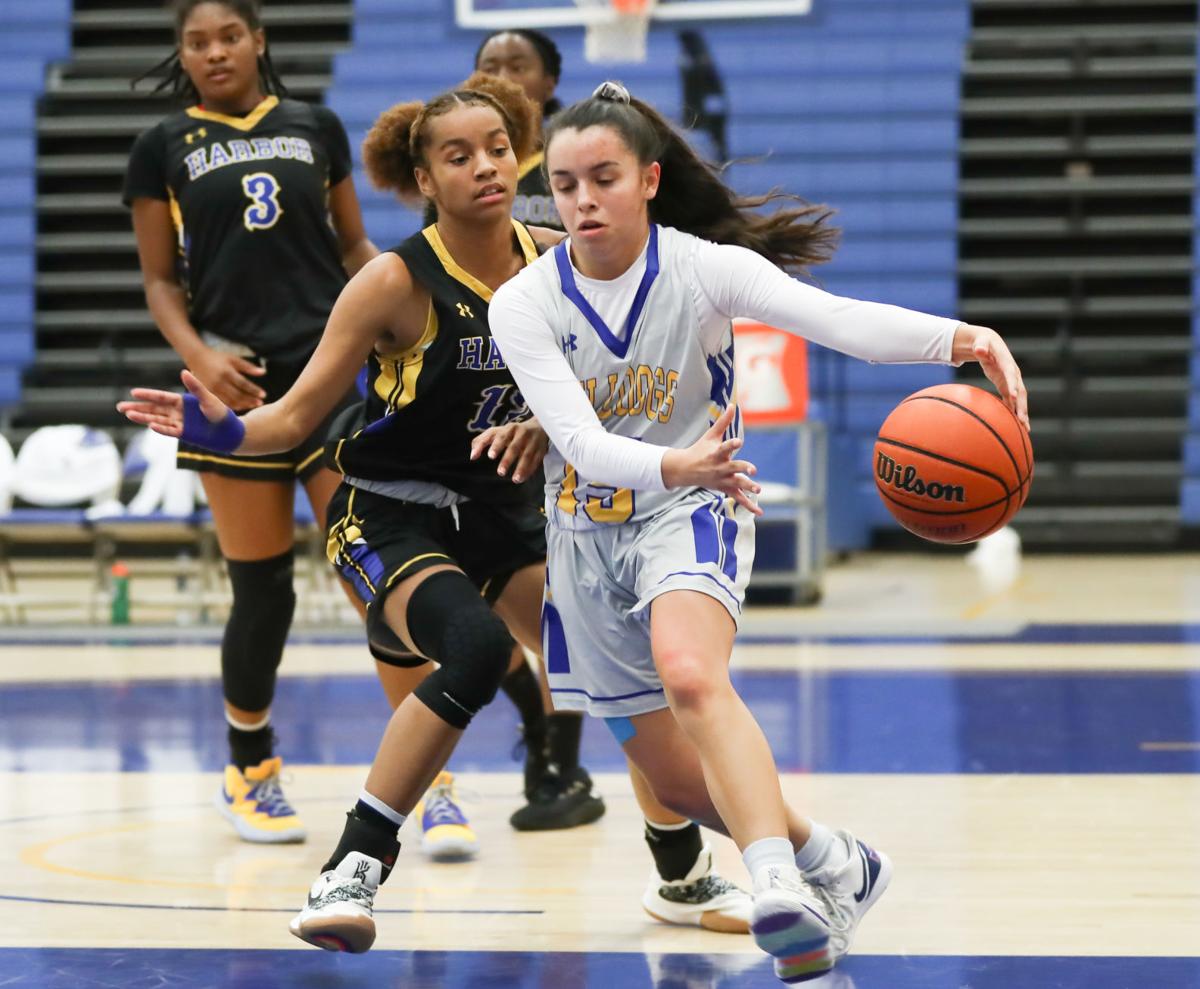 Her team still trailed when she made the 3-pointer but Alijah Paquet’s trey at the 3:41 mark of the third quarter was the shot of the game.

The 3 pulled Hancock College within 36-35, but more importantly it started a decisive Hancock run that propelled the Bulldogs to a 63-48 win over Los Angeles Harbor in the host team’s Lady Bulldogs Toys for Tots Classic at Hancock’s Joe White Memorial Gym Friday night.

Paquet was 3-for-13 on 3s but, “It seemed like every 3 she made either stopped a run or started one,” said Hancock coach Cary Nerelli.

The shot Paquet made at the 3:41 mark of the third pretty much did both.

Hancock’s match-up zone clamped down on the Seahawks as the Bulldogs salted away the win in the fourth quarter.

“It was just a matter of digging in and playing our game,” said Gudeman, who hails from Nashville, Indiana.

“I live 15 minutes from the Indiana University campus,” when she’s in Nashville, Gudeman said. She is the only Bulldog whose hometown is not on the Central Coast.

Those two had several inches on the tallest Bulldogs on the floor, and their work on offensive rebounds helped the Seahawks wipe out a 19-9 first-quarter lead.

“Coach Nerelli gave us a pep talk at halftime and we made an adjustment,” said Gudeman. The Bulldogs limited the Hadbor pair’s offensive rebounds to a combined two in the second half after they combined for eight in the first.

“Our girls finally figured out that they weren’t going to out-leap them,” Nerelli said.

“They started turning and blocking out.”

As the Seahawks tried to pressure the ball as time wound down in the fourth quarter, McGary and Aryana Gonzales effectively broke the pressure and worked the clock instead of being suckered into driving the lane for quick shots.

“Our kids needed to learn how to stop a run, and I thought they responded very well,” said Nerelli.

Jayci Bayne, a leading scorer for Hancock, took a shot to the nose in the first half. She returned wearing a face guard in the second but, “She’s going to the emergency room,” said Nerelli. “It might be broken.”

Bayne finished with nine points. Hancock will play Glendale College at  3 p.m. Saturday, the last day of the tournament.

Harbor will play Santa Ana at 11 a.m. and Santa Barbara will play Orange Coast at 1 p.m. in other Saturday tournament games.

Toys for Tots is accepting donations of new, unwrapped toys at the tournament through Saturday.

Hancock College's Milan McGary (21) drives past Monique Garrett (12) of L.A. Harbor during the Toys for Tots Classic in Santa Maria.

Hancock College's Jayci Bayne (23) elevates to defend an inbound pass during the Toys for Tots Classic in Santa Maria.