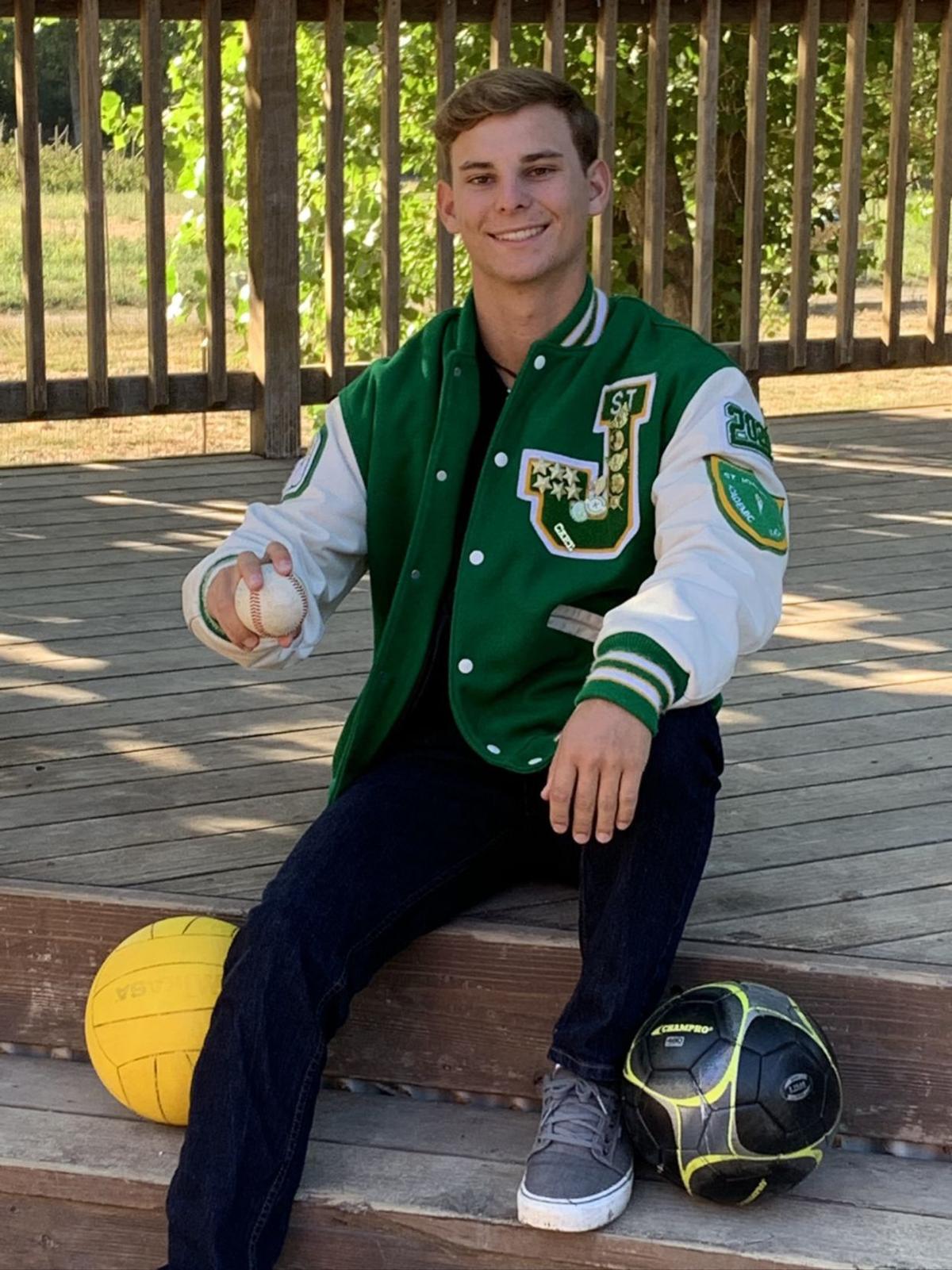 St. Joseph senior Aden Anderson played four sports during his time with the Knights and he plans on continuing his athletic and academic career at Cal Poly, where he hopes to make the baseball team as a walk-on center fielder. 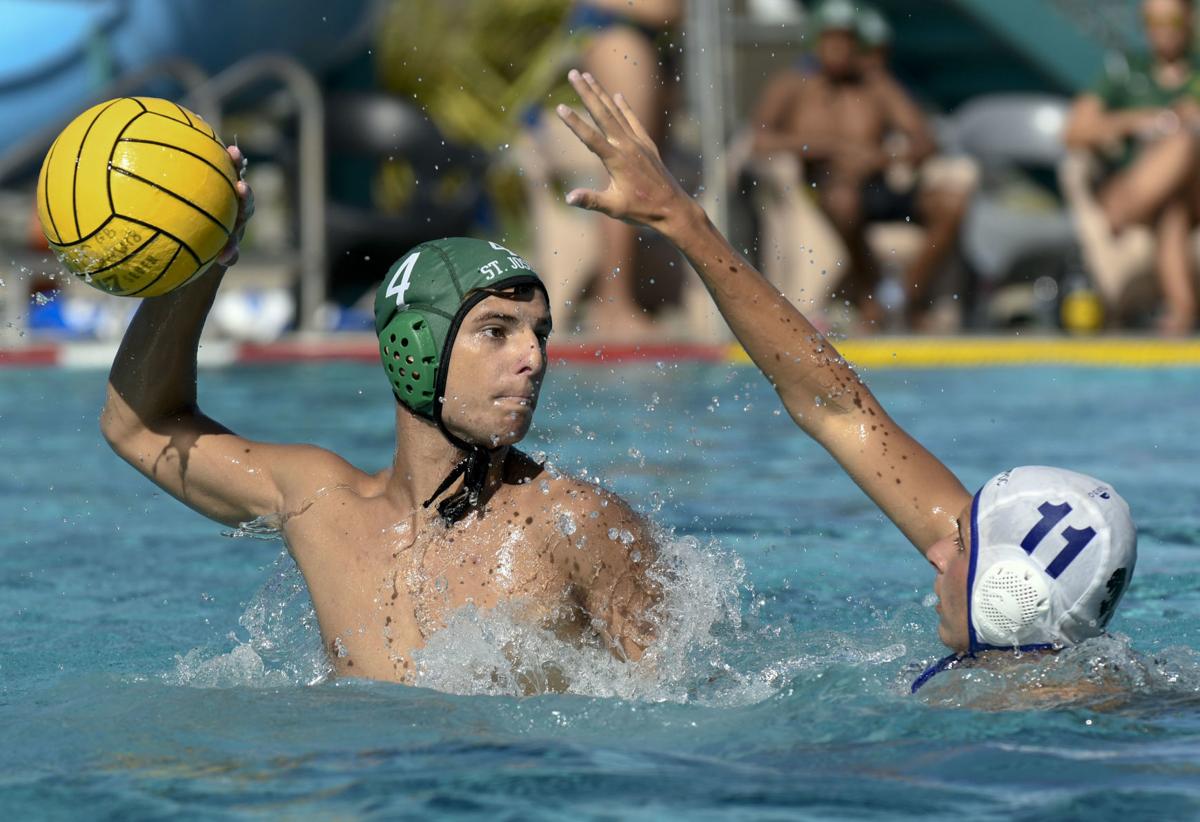 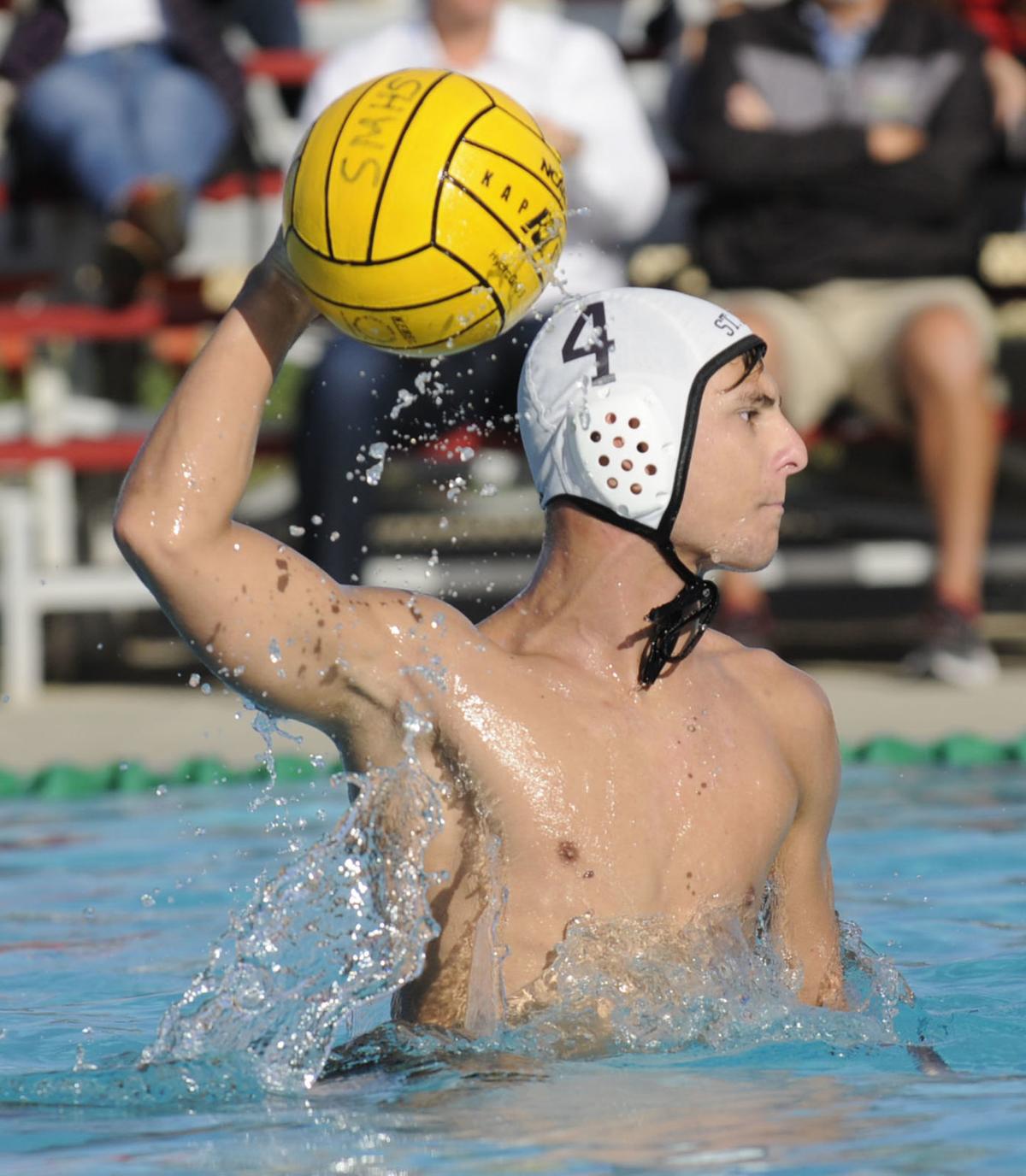 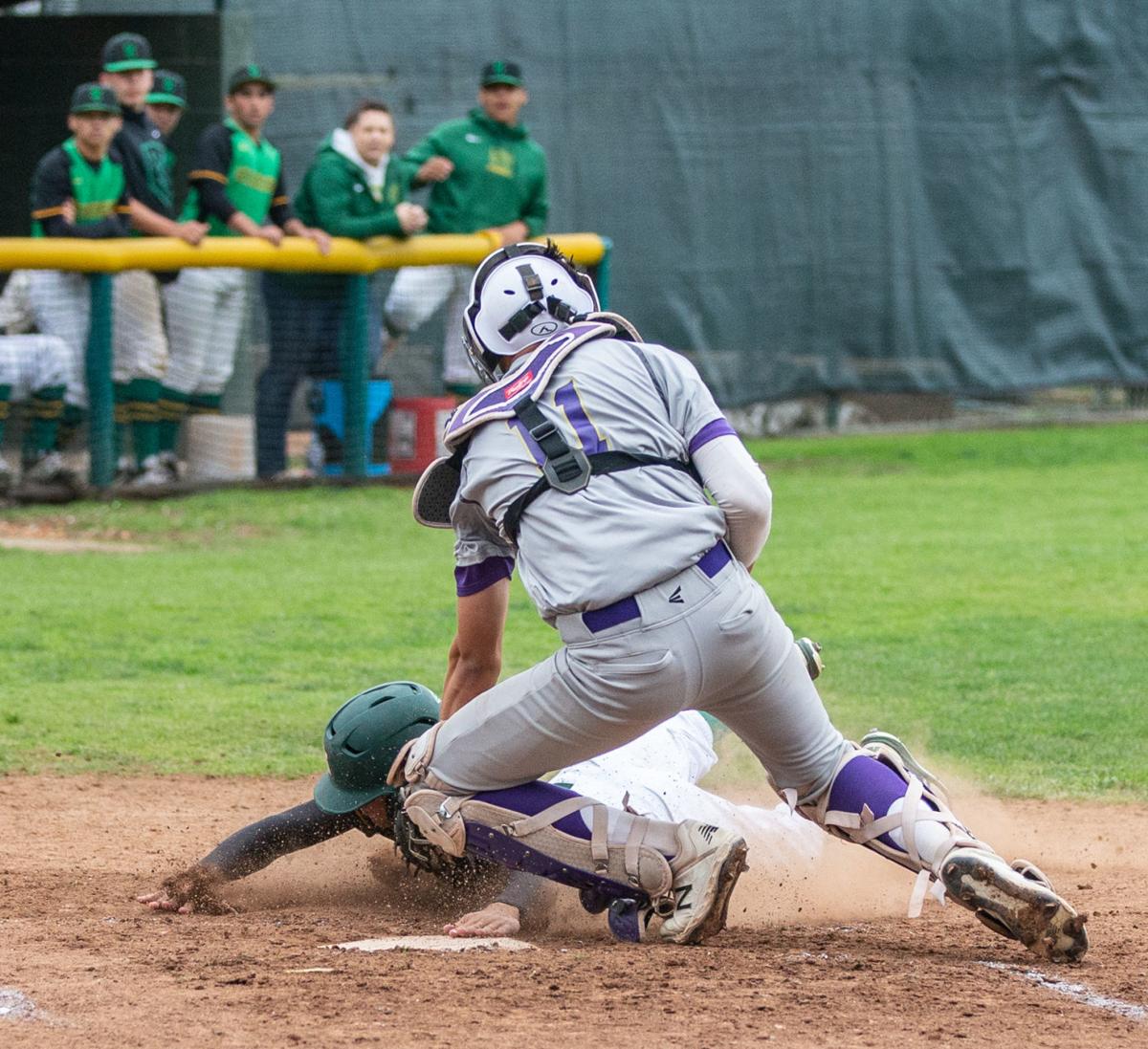 "I'm going to try to walk on at Cal Poly, probably as a center fielder," said Anderson.

Our 'Senior Spotlight' series is aimed at highlighting senior student-athletes who have had their final year of high school disrupted by the coronavirus outbreak. The athletes featured here were their school's nominee for Athlete of the Year or Student Athlete of the Year for the Northern Santa Barbara County Athletic Round Table's end-of-year banquet that has been canceled due to the outbreak.

"I started out playing shortstop," his senior year at St. Joseph, Anderson said. "But the shortstop they had (Jeremy Camarena, who replaced the injured Jacob Galloway) was really good, and shortstop was all he played.

"So they put me out in center field because I'm really, REALLY fast."

Anderson didn't hit much for average during his junior year or his shortened senior season at St. Joseph, but he handled all six of his fielding chances in a senior year that ended with the Knights standing at 3-3.

NFL Draft Preview: What you need to know ahead of this year's draft

It was supposed to be an extravaganza only Las Vegas can bring, complete with showgirls, A-list celebs, and a stage in the middle of the Bella…

Schools statewide were closed in March in the wake of a statewide shelter-in-place directive California Governor Gavin Newsom issued because of COVID-19.

He played four sports during his four years at St. Joseph, and he played varsity water polo and soccer, as well as baseball his last two years of high school.

However, "Baseball is easily the sport I miss the most," as his high school time is about to end, said Anderson.

"Baseball was my favorite sport ever since I was a little kid. It will be special if I play college baseball."

Anderson carried a 3.87 GPA at St. Joseph. He was the St. Joseph nominee for the 2020 Northern Santa Barbara County Athletic Round Table Male Scholar Athlete of the Year scholarship honor.

Anderson will major in mechanical engineering at Cal Poly.

"I would like to become a mechanic and work on cars. That's kind of like my passion," he said.

The grass surface, which was run on by football greats like Napoleon Kaufman, Sheldon Canley and Vai Taua, has been removed and artificial turf is being installed, with the bulk of the work being completed this week as part of a $3.8 million project by Lompoc Unified School District and the Campaign for the Lompoc Community Track and Field.

"I don't really have experience working on cars, but that's why I wanted to go to Cal Poly. To get some experience there."

Anderson said Cal Poly was an easy college choice for him.

"They are a good engineering school. It's close to home and it's close to the beach. It's really nice."

Anderson echoed the thoughts of many others when it comes to distance learning.

"I've gotten used to it. But I'm definitely missing just the social aspect of having other kids around."

He said he has been doing some home workouts.

"I've been doing tee work at home because I have a tee and a net," Anderson said. "I've been playing catch with my dad every now and then."

Aden Anderson gave a special shout out to his mother, Phyllis, and father, Craig, in his scholarship application.

"...they have put so much time and effort driving me to school, sporting events, standing out in the cold or hot weather depending on what sport I'm playing, and just being the best supporters I could ever ask for."

NFL Draft Preview: What you need to know ahead of this year's draft

It was supposed to be an extravaganza only Las Vegas can bring, complete with showgirls, A-list celebs, and a stage in the middle of the Bellagio fountains. Instead, the NFL draft will come to you Thursday night from the friendly confines of Roger Goodell’s basement. No one, of course, expected anything like this to happen. But here’s a look at the history of the draft and what might take place this year, as America tunes in for a draft like no other

Raiders quest for No. 1 receiver could be filled in draft

The plan the Raiders had to fill their No. 1 receiver role backfired last year when Antonio Brown ended up getting cut before even playing a g…

The Las Vegas Raiders spent most of the free agency period bolstering one of the NFL's worst defenses, with one glaring exception.

The Los Angeles Rams haven't made a first-round draft selection since picking quarterback Jared Goff back in 2016. They don't have a first-rou…

It was supposed to be an extravaganza only Las Vegas can bring, complete with showgirls, A-list celebs, and a stage in the middle of the Bella…

A look at the best and worst in 49ers draft history

From his home in the New York City suburbs, Roger Goodell will handle perhaps his most visible annual chore — announcing draft picks. Visible,…

Virus shutdowns will likely make NFL draft most bet on ever

For those who haven't mastered the odds of Belarussian soccer or Russian table tennis, this week's NFL draft gives U.S. gamblers their first o…

The Chargers won just five games last year with Philip Rivers starting all 16 games. In the AFC West, they went 0-6. Shame on them if they can…

What is 'It'? Identifying and developing intangibles in QBs

Sam Howell has been a quarterback since first grade. His father told him then that to play the position he needed to be the leader of the team…

The football powerhouse could have as many as 16 players selected in the opening round Thursday night, a number that would top the previous ma…

Look for 3 QBs in first 5 picks of NFL draft

Talk about virtual drafts, what is a mock draft, really? Make believe. The upcoming NFL remote draft beginning Thursday night has a touch of i…

Tarvaris Jackson stood in the six-hole, right of second base with teammate Brandon Dean. The baseball season had just begun, and Jackson, a co…

Who was Cowboys' best 1st-round pick? Let the debate begin

BEST FIRST-ROUND DRAFT PICK: QB Troy Aikman. The first overall pick out of UCLA in 1989 might have not won three Super Bowls without NFL caree…

John Elway's name is all over Broncos' long draft history

BEST FIRST-ROUND DRAFT PICK: RB Jim Brown. Period. Arguably the greatest player in NFL history was picked by the Browns with the No. 6 overall…

BEST FIRST-ROUND DRAFT PICK: QB Dan Marino. The Dolphins and coach Don Shula were surprised when their turn came with the 27th overall pick an…

NFL Draft: Bengals' history from Boomer to Ickey to Akili

BEST FIRST-ROUND DRAFT PICK: LT Anthony Munoz. The third overall pick in 1980 had a Hall of Fame career anchoring the line during the Bengals'…

BEST FIRST-ROUND DRAFT PICK: DE J.J. Watt. He was booed by Texans fans when he was selected with the 11th overall pick in the 2011 draft. But …

ATLANTA (AP) — BEST FIRST-ROUND DRAFT PICK: QB Matt Ryan. Hard to go with anyone other than Matty Ice, who restored some credibility for the f…

BEST FIRST-ROUND DRAFT PICK: QB Aaron Rodgers. When the Cal star took a draft-day plunge in 2005, the Packers scooped him up with the 24th ove…

BEST FIRST-ROUND DRAFT PICK: QB Peyton Manning. After selecting him with the top overall pick in 1998, the franchise made a dramatic turnaround.

For Bears, sweetest pick of all was Payton

BEST FIRST-ROUND DRAFT PICK: C/LB Chuck Bednarik. Concrete Charlie was the No. 1 overall pick in the 1949 NFL draft and is the league’s last f…

BEST FIRST-ROUND DRAFT PICK: Offensive lineman Bruce Matthews in 1983. This franchise, previously the Houston Oilers, has picked some Hall of …

BEST FIRST-ROUND DRAFT PICK: QB Joe Namath. Who else? Broadway Joe was the No. 1 overall pick in the AFL draft in 1965 and went on to deliver …

4 Hall of Famers among top draft picks in Seahawks' history

BEST FIRST-ROUND DRAFT PICK: Three former first-round picks by Seattle already are in the Pro Football Hall of Fame, with a fourth set to be i…

From Kelly to Cousineau, the Bills' best, worst draft picks

BEST FIRST-ROUND DRAFT PICK: RB Fred Taylor. A rare combination of size, speed and elusiveness had Taylor routinely mentioned among the best b…

BEST FIRST-ROUND DRAFT PICK: DE Lee Roy Selmon was the first draft pick in team history, No. 1 overall in 1976 by an expansion franchise that …

St. Joseph senior Aden Anderson played four sports during his time with the Knights and he plans on continuing his athletic and academic career at Cal Poly, where he hopes to make the baseball team as a walk-on center fielder.