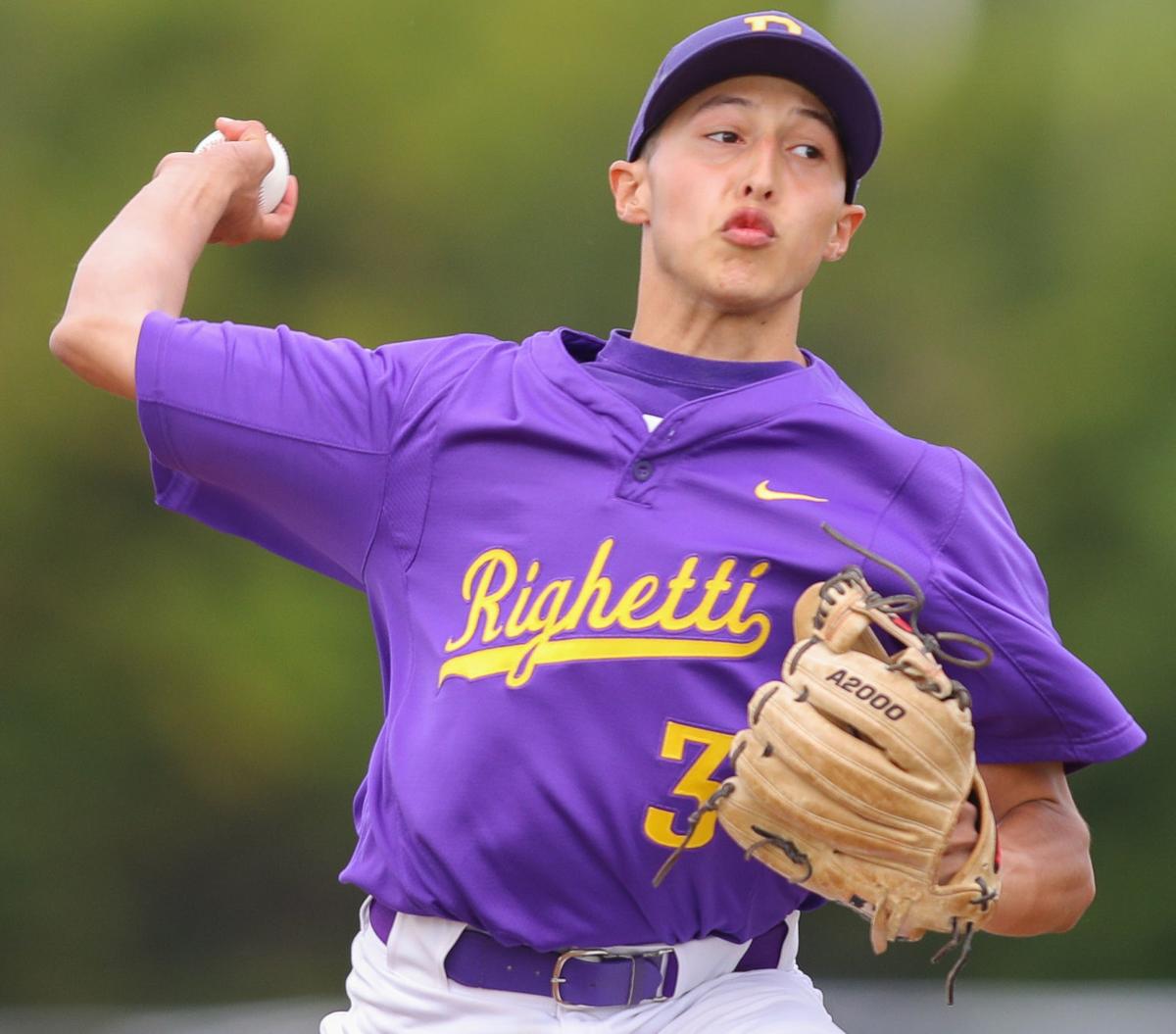 Righetti starter Caleb Dulay (3) delivers a pitch against Frontier during the CIF Central Section Division 1 semifinal earlier this month. Dulay allowed no earned runs over 9 2/3 innings in the playoff game. Dulay has been voted the Mountain League co-MVP along with SLO's Cooper Benson, and is the LCCN All-Area MVP. 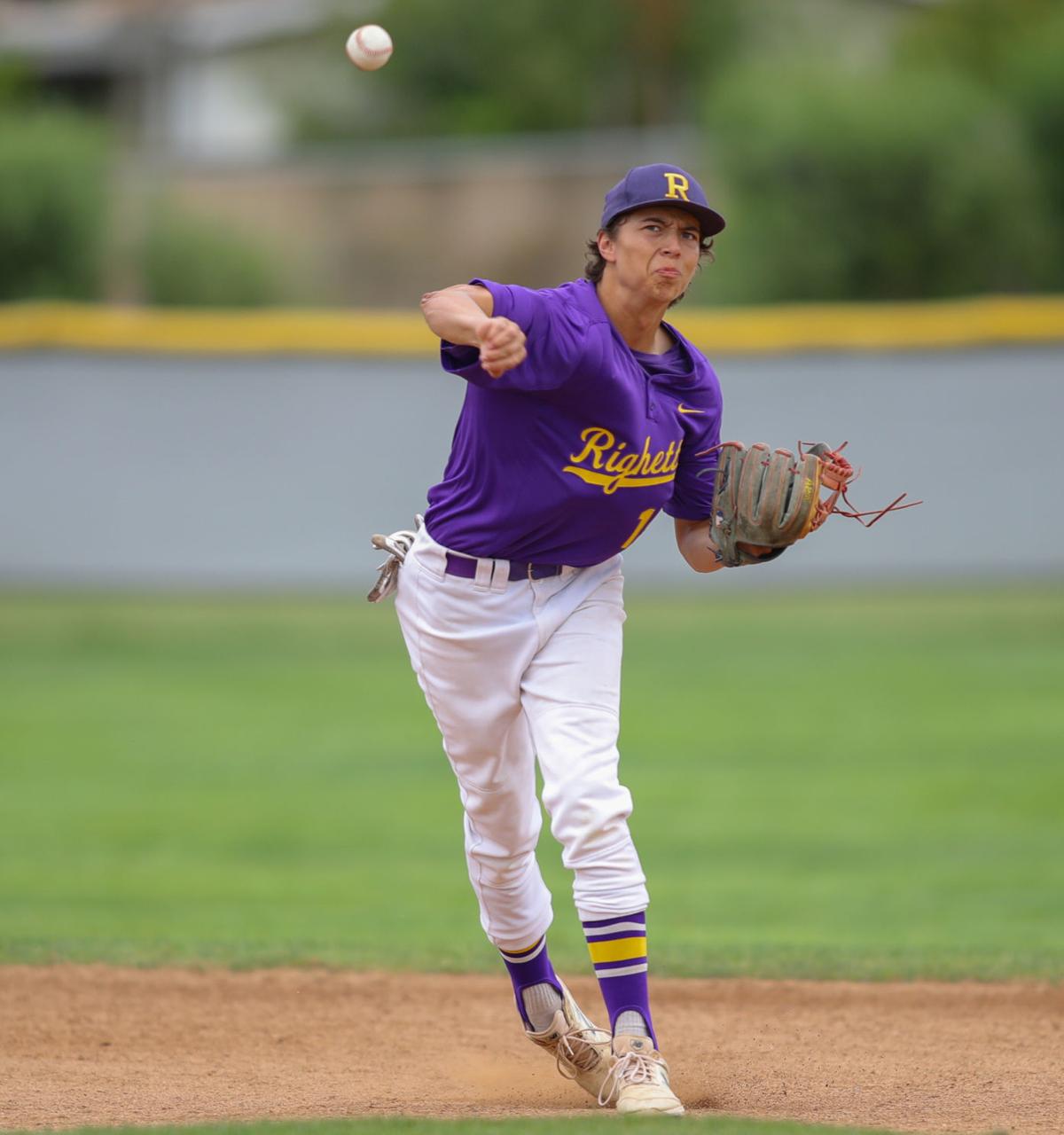 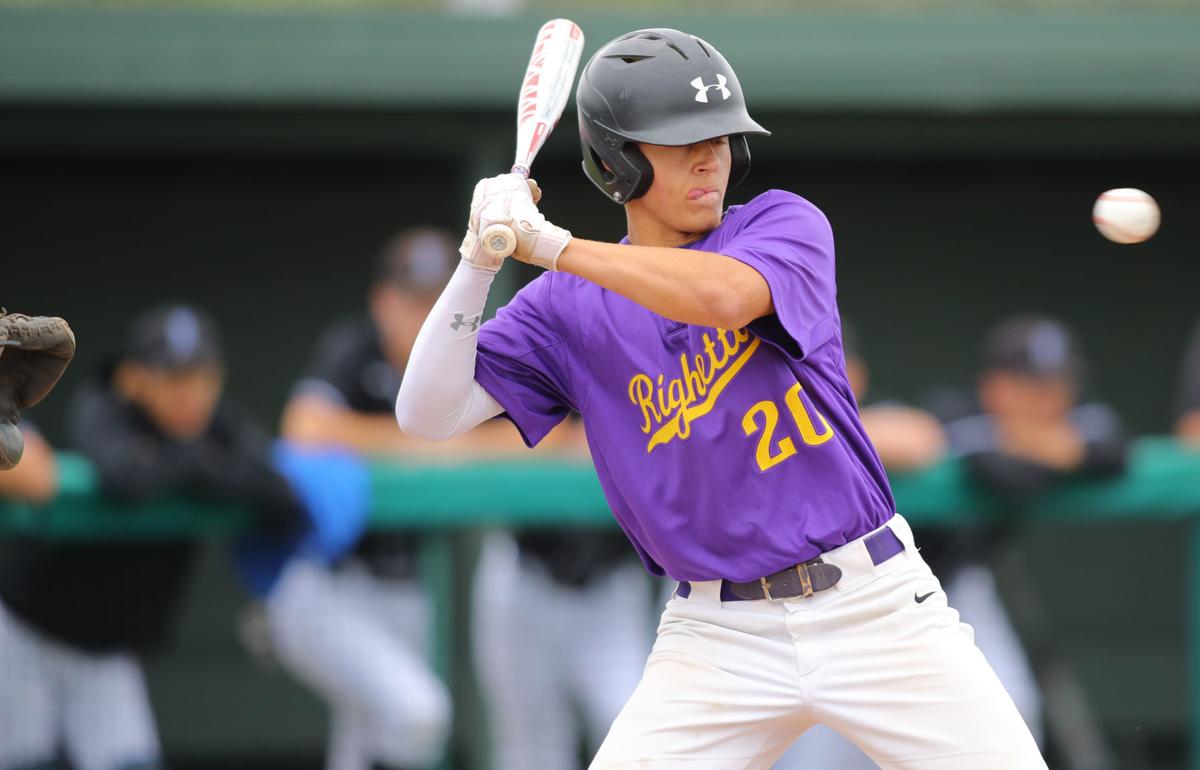 Jake Steels (20) bears down as a pitch comes in high as No. 4 seed Righetti hosted No. 8 seed Bakersfield Frontier in a CIF semifinal game. 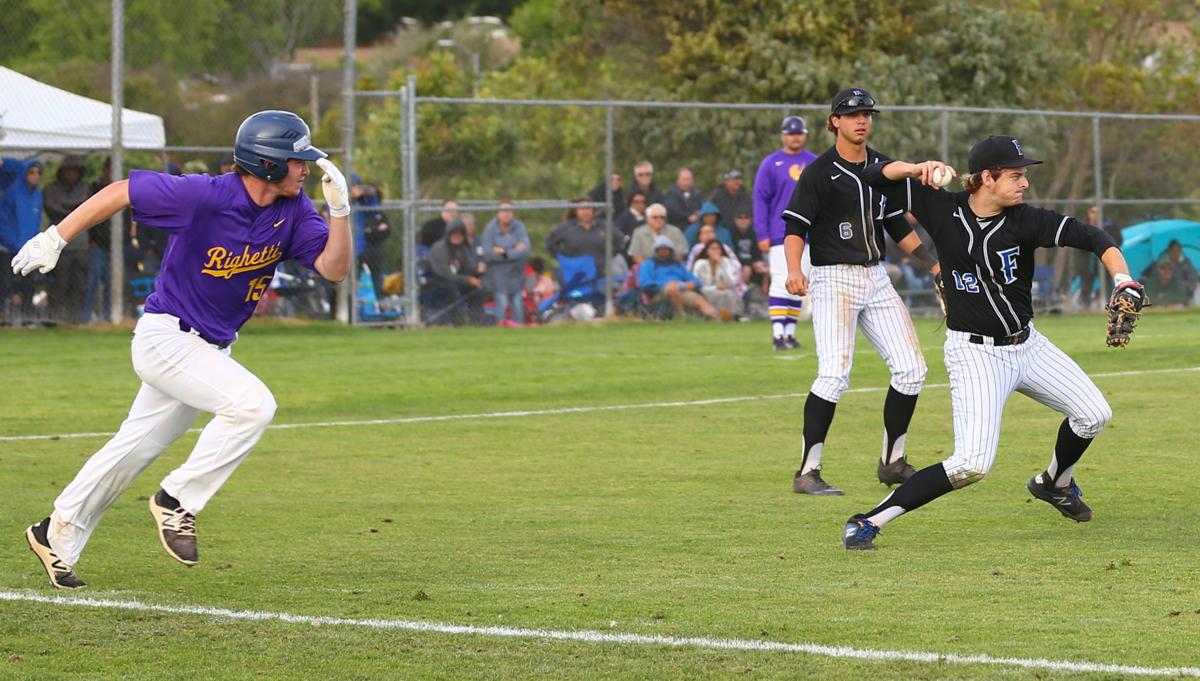 Righetti's defense blinked in the 11th inning, and Bakersfield Frontier will play for the CIF Central Section Division 1 baseball championship.

With two outs in the top of the 11th, a Nick Phair ground ball went between the legs of Righetti third baseman Zak Taylor. Kobe Silva scored the go-ahead run from second base, closer Kris Anglin, a Cal State Bakersfield commit, finished the job and the No. 8 Titans edged the No. 4 Warriors 2-1 in a semifinal at Righetti that began Wednesday afternoon and ended Wednesday night.

Frontier scored in the 11th without getting a hit. Righetti did the same in the seventh, the last regulation inning.

"In playoff baseball, it comes down to who executes the best and they executed better than we did," said first-year Righetti coach Kyle Tognazzini. The Warriors, who won the inaugural Mountain League championship after moving from the Southern Section to the Central Section, finished 22-6.

Photos: Righetti falls to Frontier in semifinals of D1 playoffs

Quigley Espionla singled off Anglin with one out in the 11th, just the third Righetti hit of the game. Anglin got a pop out for the second out.

Ryan Delgado delivered a walk-off single to give the Warriors a 3-2 win over No. 5 Bakersfield LIberty in the quarterfinals last Saturday, but Anglin got Delgado swinging Wednesday night to end it.

Frontier beats Righetti 2-1 in 11 innings as Anglin gets a strikeout to end it. @BVarsityLive #santamariatimes Titans advance to D1 final. pic.twitter.com/wpakBelFAp

Delgado, Righetti's starting shortstop, swapped positions with RHS starting pitcher Caleb Dulay with two outs in the 10th. Delgado got the last out of that inning, but the Titans broke through in the 11th.

Neither Frontier nor Righetti scored on a base hit in their marathon semi, and neither team scored an earned run.

"I don't recall anything like that before," said Tognazzini.

Frontier's Elijah Pascual raced home in the sixth for the first run after a low Dulay fastball went off catcher Andrew Gonzalez's glove for a passed ball.

It's an arms race: Pitching is biggest factor the deeper you get in CIF postseason

Frontier starter Austin Puskaric hit Righetti lead-off batter Isaiah Navarro with a pitch in the seventh. The Titans tried to get Navarro at second on an Espinola sacrifice bunt but missed, and everyone was safe.

With one out, the runners moved up on a passed ball against Frontier catcher Tyler Weiner, and the Titans had to settle for the out at first on a slow Delgado ground ball that third baseman Tristin Tatum fielded.

After the regulation seven innings, the Warriors were still in it despite having done just about nothing against Puskaric, another Cal State Bakersfield commit.

"We had our chances," said Tognazzini.

Righetti had a golden one in the ninth. With one out Frontier's left fielder, Brennan Fleischer, lost an Espinola fly ball in a tricky sun and the ball fell in for a double, putting runners on second and third with one out.

A promising-looking Taylor drive hooked and wound up in foul ground, a few feet wide of the left field line. The Titans ultimately walked Taylor intentionally, loading the bases.

Fleischer moved from left to the mound and got a force at home and another ground out to get out of the inning.

"This game went the way the others for us in the playoffs have - strong starting pitching, good defense and our offense doing just enough," said Frontier coach Garrett White whose team out-hit Righetti 7-3.

Frontier upset top seed Clovis Buchanan 1-0 in the quarterfinals. "Kris was our pitcher in that one," said White. Anglin threw a one-hitter then with 11 strikeouts.

The Warriors failed to capitalize on a gem by Dulay.

"Our starter just ran out of pitches (thanks to the 110-pitch limit), and so did Dulay."

The semifinal loss brought a stellar Righetti season to an end.

"We knew we had a good team," said Tognazzini. En route to winning the Mountain League title, "We just took it a game at a time."

One 805 team, Atascadero, beat another, Templeton, 4-3 Wednesday to earn a spot in the Division 3 title game.

Righetti junior right-hander Caleb Dulay made 13 pitching appearances this year, and he did not lose in any of them.

Intimidation is a vital weapon in a pitcher's arsenal.

It could be argued that Kyle Tognazzini was facing some pressure this spring.

Righetti's Ryan Delgado has made his college choice.

Righetti starter Caleb Dulay (3) delivers a pitch against Frontier during the CIF Central Section Division 1 semifinal earlier this month. Dulay allowed no earned runs over 9 2/3 innings in the playoff game. Dulay has been voted the Mountain League co-MVP along with SLO's Cooper Benson, and is the LCCN All-Area MVP. 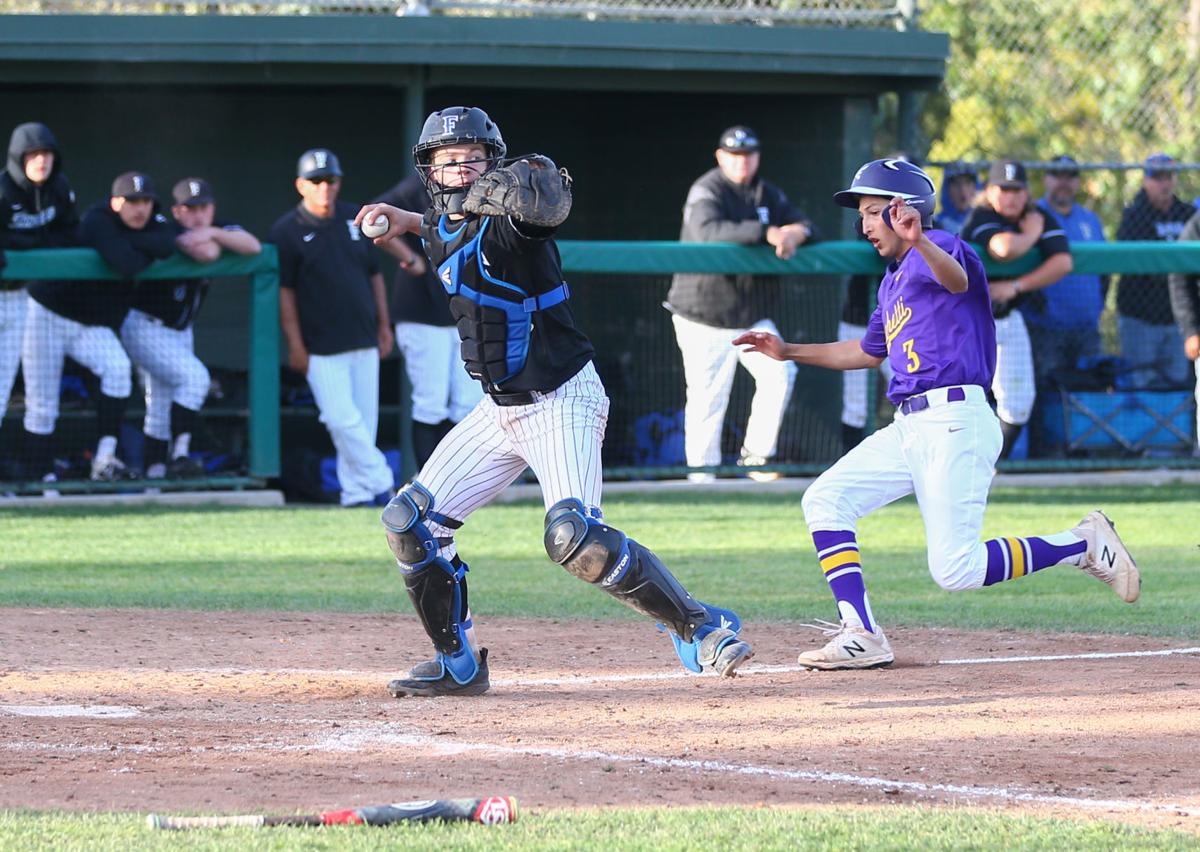 Righetti's Caleb Dulay (3) gets forced out at the plate by catcher Tyler Weiner (9) as No. 4 seed Righetti hosted No. 8 seed Bakersfield Frontier in a CIF semifinal game Wednesday.

Jake Steels (20) bears down as a pitch comes in high as No. 4 seed Righetti hosted No. 8 seed Bakersfield Frontier in a CIF semifinal game. 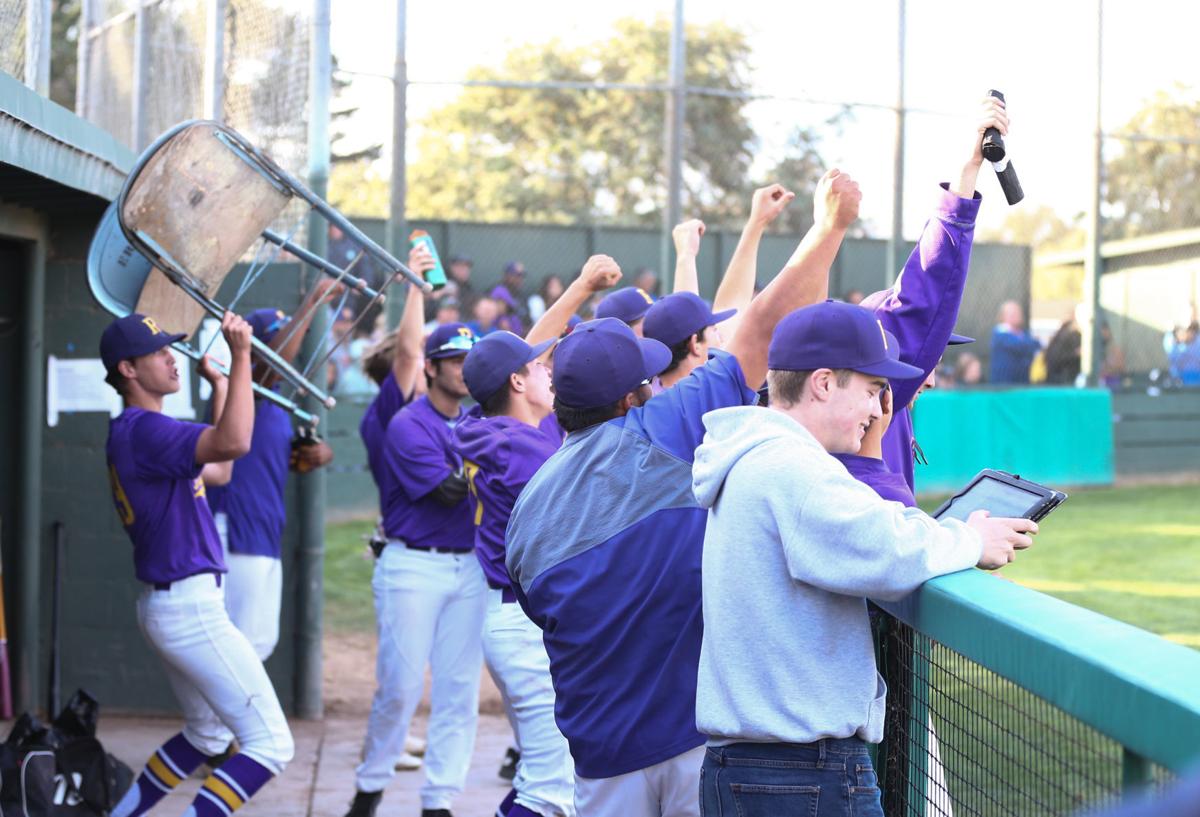 The Righetti dugout presses for a rally in their semifinal game against Frontier on Wednesday.