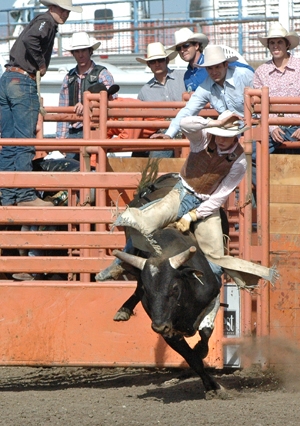 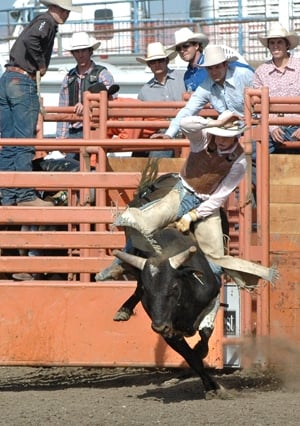 It was Champions Day Sunday at the Elks/Unocal Events Center.

After four days of competition, the suspense finally ended.

Santa Maria?s huge base of rode fans was there to cheer the champions as the 64th annual Santa Maria Elks Rodeo came to a close.

As the final performance began, the battles were far from over. The cowboys and cowgirls had one last shot to take home the title in their events.

And the champions? buckles go to …

q Russell Cardoza in the All Around for his first place finishes in the first go-round of Steer Wrestling and Tie Down Roping and for earning the most money over the weekend.

The competition was down to the wire 8 except in the Bull Riding where the bucking bullies once again stole the show.

BWhat you are seeing are the results of our >Born to Buck? breeding program,C said John Growney, the owner of the Growney Brothers Rodeo, a rough stock provider from Red Bluff. BThey?re going to have to start breeding bull riders next to keep up.

BThese are smart bulls. You can see when they get in the chute that they have a plan and it?s great to watch them. You have to watch them after the ride, too. When they throw their head up, they?re letting you know that they are pleased with themselves 8 that they are the head guy.C

The was bad news for the cowboys 8 except for the three who managed to complete their eight-second scoring rides. At the Santa Maria Rodeo, the PRCA normally pays winning money to the top six finishers in each event. With only three successful rides, that trio gets to split the entire pot.

J.C. Bean posted the winning bull riding score of 85 during Friday night?s performance. Ted Bert opened Thursday night?s competition with a 76-point ride that held up for second place. Colin McTaggart put 71 points on the board Friday night that also held up for third place.

Ryan Gray topped that Sunday and took the champion?s buckle with an 87-point ride on the Rosser Rodeo Company?s Pepper Bound.

BI was on a really good horse. He?s one of the younger horses and it was exciting to draw him for my ride,C said Gray. BHalf of your score comes from the horse?s performance, so it?s important to draw a good horse. You have to have good timing with the animal and a lot of upper body control 8 not only to just stay on the horse but to get a high score.C

Tyson Thompson gave the crowd a thrill with his 79-point ride Sunday that earned him third place.

No one caught Rusty Allen in Saddle Bronc Riding. Allen had to sweat out the entire weekend having posted his 87 on Thursday?s opening night. But no one caught him over the next three days to give Allen back-to-back Santa Maria Rodeo Bronc Riding titles. Santa Margarita?s Justin Arnold and Cody Wright tied for second with 80-point rides.

Mora defeated himself in the Elks Team Roping #8. He teamed with Danny Fleming for the day?s winning 7.8-second run. He also finished second, teamed with Josh Wineman, with a 13.1-second ride.

Noblitt and Monighetti were among six teams that qualified for Sunday?s Elks Team Roping Open finals. The times from the first two go-rounds were added to Sunday?s final run. Noblitt and Monighetti put up a three-go total of 30.5 seconds for the crown 8 topping the Bill Wineman/Luke Andrews team (37.7) and the Eric Pybas/Josh Wineman team (42.8)

BDustin and I grew up roping together in Los Alamos,C said Monighetti. BWe also roped together at West Hills College.C

BWe love being able to compete together here,C said Noblitt. BThis is our hometown (Noblitt is from Orcutt, Monighetti is from Los Slamos). This is the best rodeo in America. We?ll definitely be back again next year.C

In the PRCA Team Roping, Eric Cozzitorto and P.K. Kennedy had the day?s fastest time, 6.7-seconds, for a two-go total of 18.6-seconds. But it wasn?t fast enough to get them into the money.

The duo of Chris Wooten and Jared Hixon had the fastest run of the second go-round at 5.6-seconds. Kyle Lockett and Lance Brooks took over the overall championship with a two-go time of 11.9-seconds.

Matt Shiozawa pulled off a double in Tie Down Roping. Shiozawa won the second go with an 8.5-second race and won the overall title with a two-go total of 17.1 seconds.

Christina Richmond pulled off her own double in the WPRA Barrel Race. Richmond won the second go in 17.57-seconds and the overall championship with a two-go total of 35.16 seconds.

BThis is the greatest event in the world,C said 80-year old Ike Simas, the 2007 Elk of the Year. BThe Santa Maria Elks got started the same month in 1927 that I was born and they?ve made this into the best rodeo in the state. All of Santa Maria should be proud.C

q Sports Editor Elliott Stern can be reached at 739-2235 or by e-mail to elliottstern@santamariatimes.com