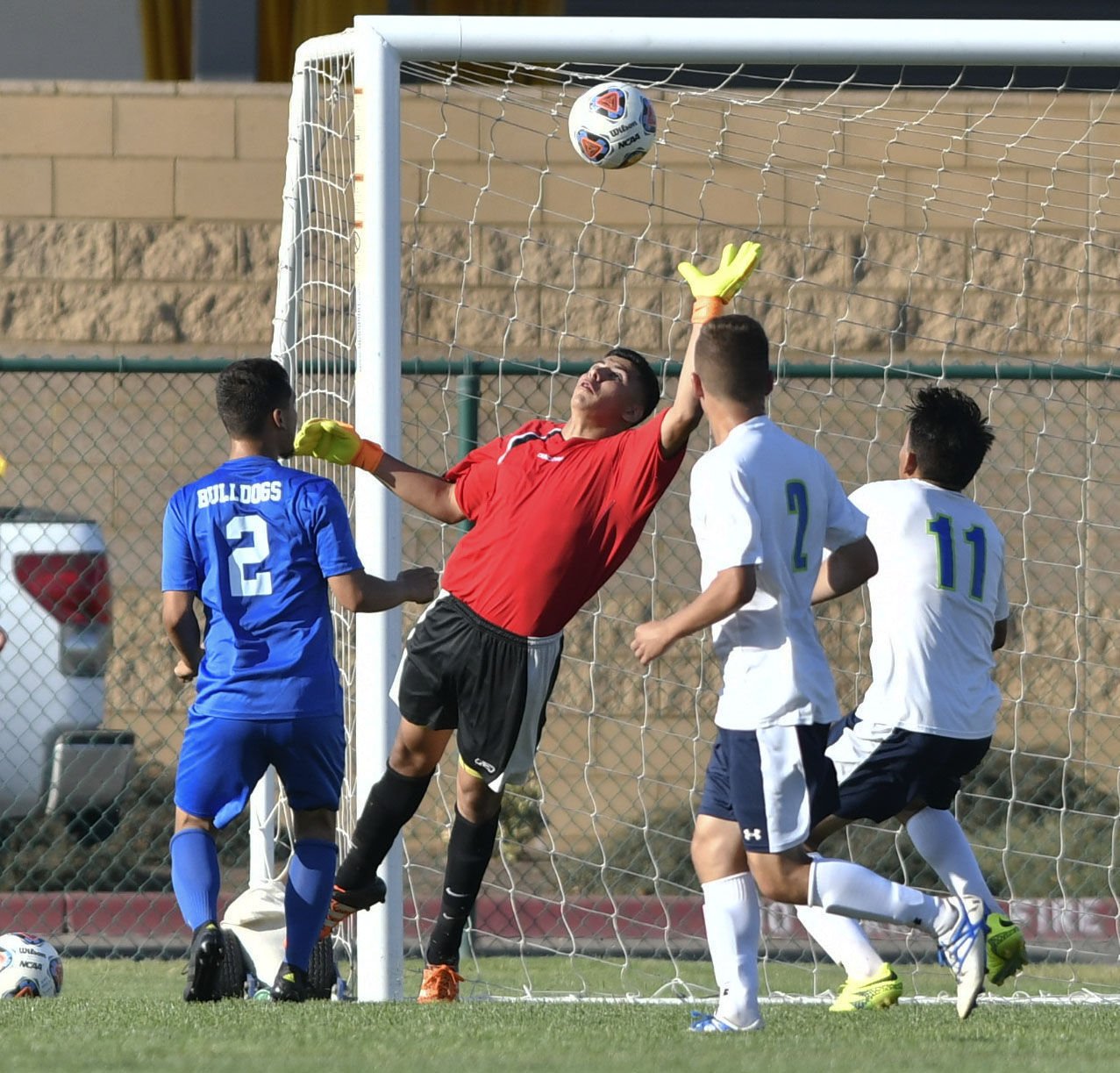 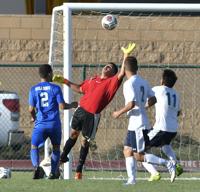 Maisen Baro, seen saving a shot while playing for Hancock College in 2016, has rediscovered his passion for soccer and has committed to play in college, signing with William Penn University. 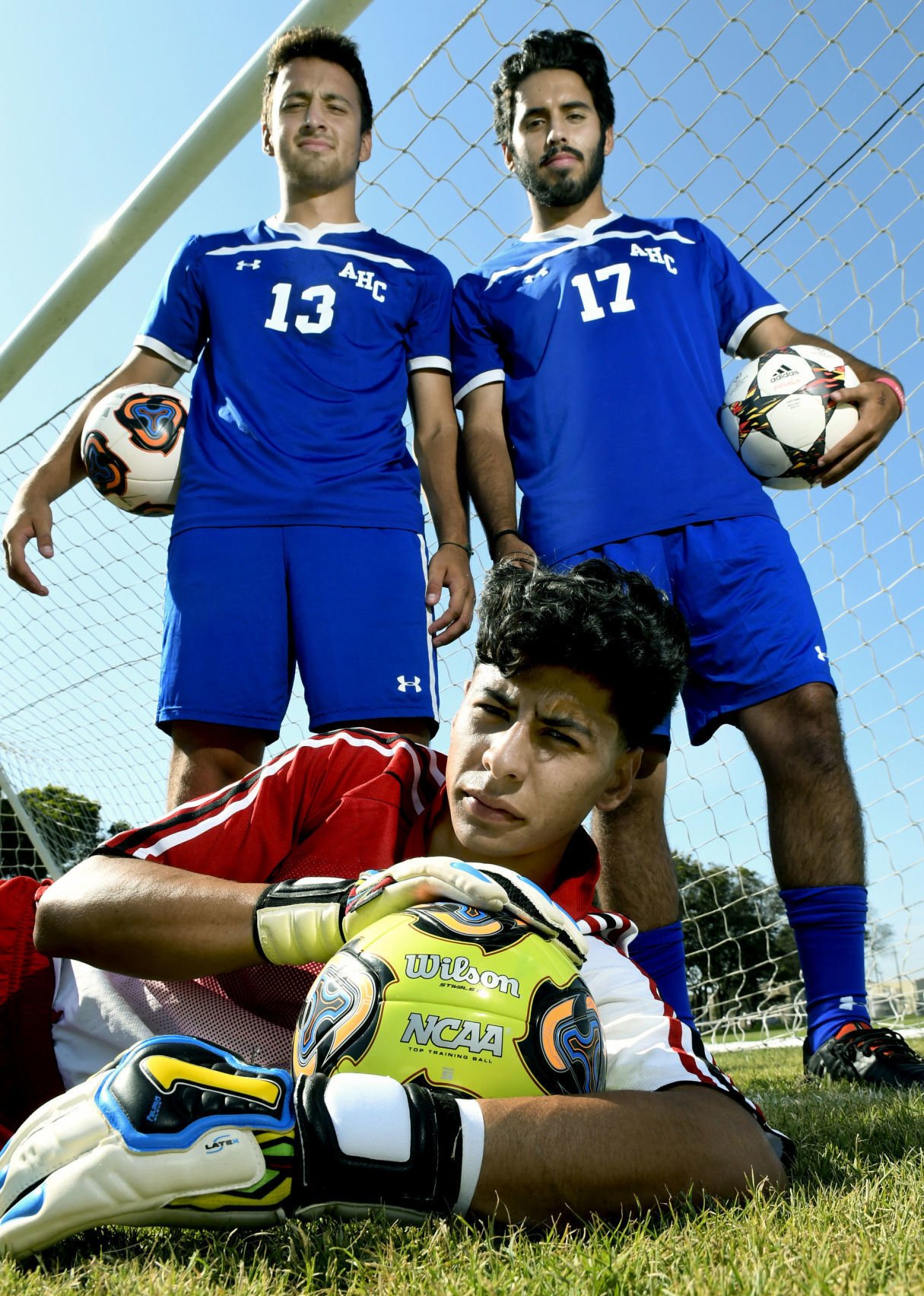 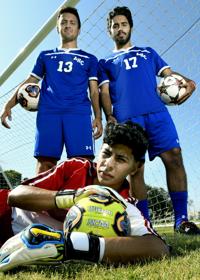 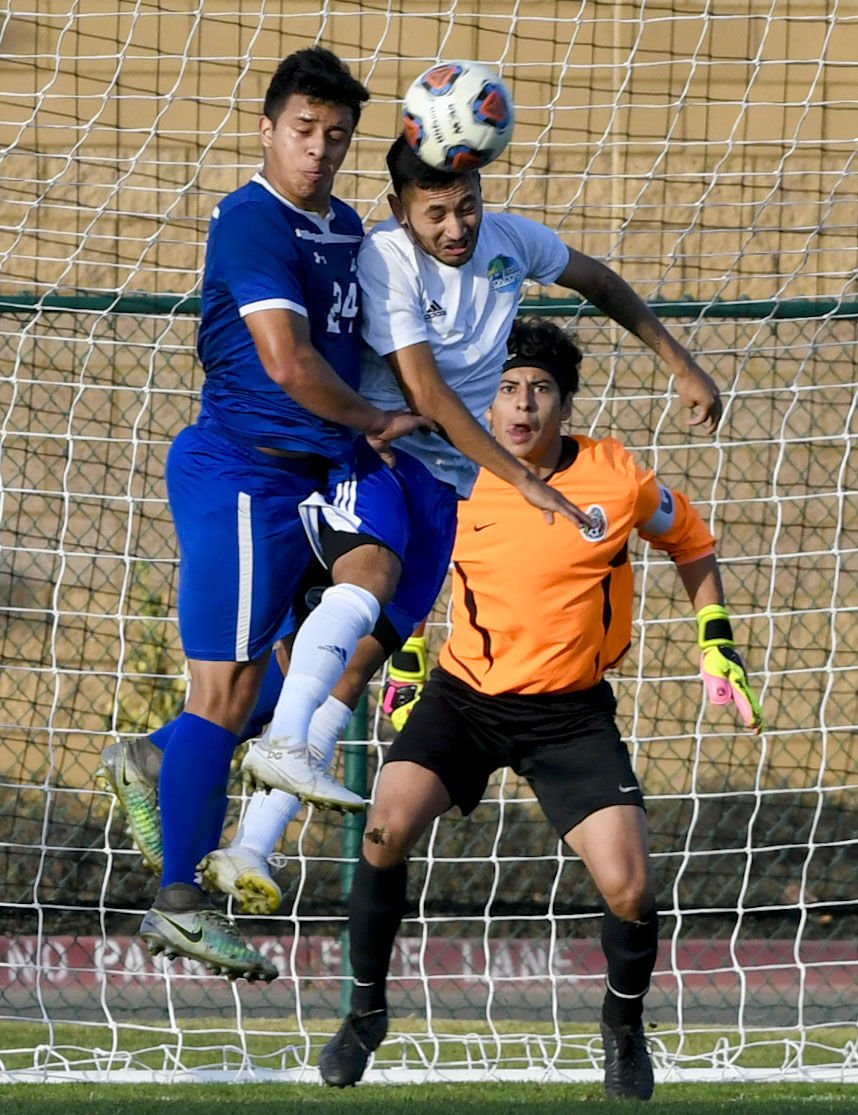 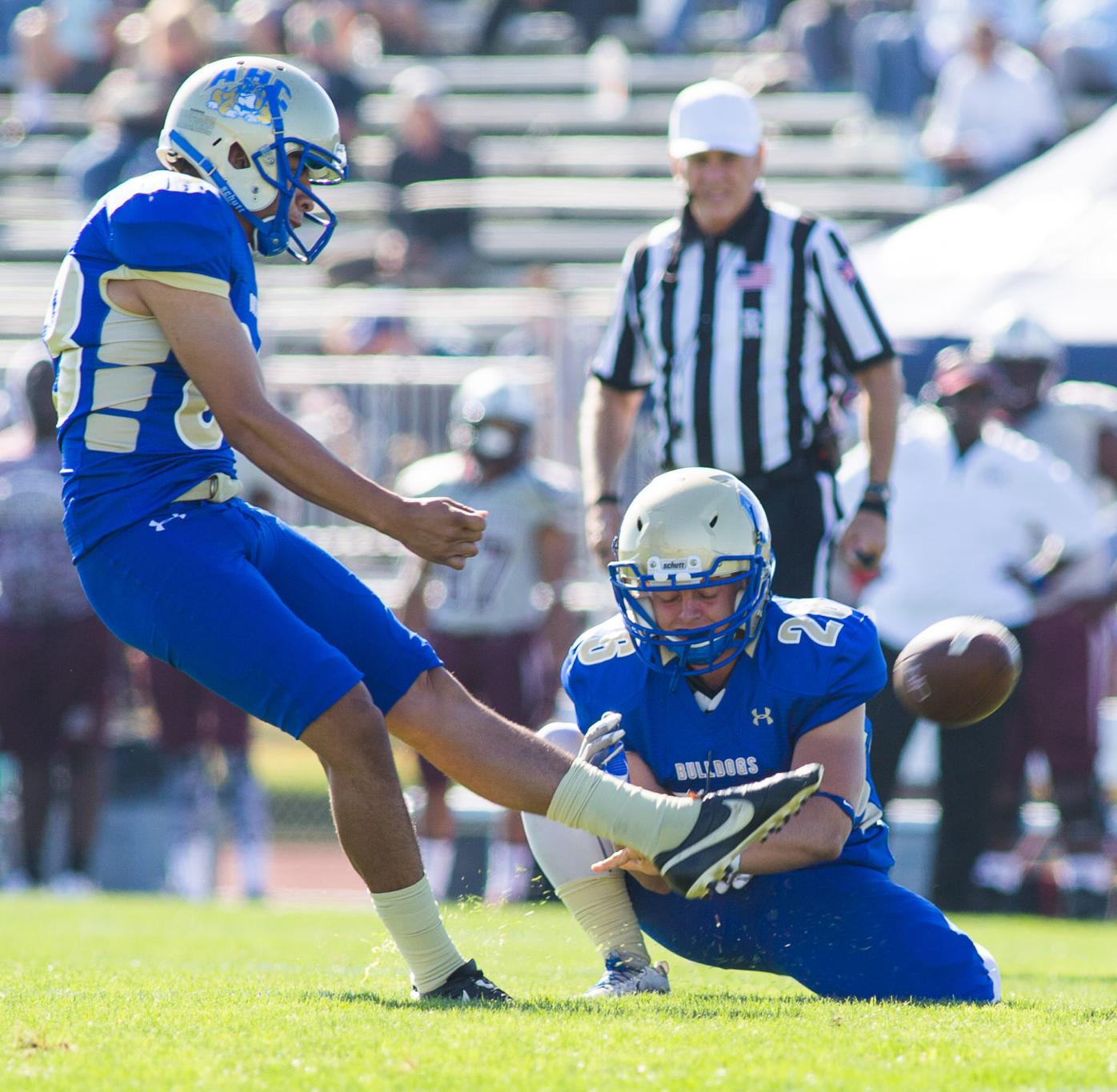 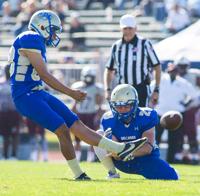 Maisen Baro also played football at Hancock. Baro is seen as he boots a first-half field goal to give Hancock an early lead over Antelope Valley College in 2016. Baro also went 5-for-5 on point-after tries in the Bulldogs' 38-17 win in that game.

Maisen Baro, seen saving a shot while playing for Hancock College in 2016, has rediscovered his passion for soccer and has committed to play in college, signing with William Penn University.

Maisen Baro also played football at Hancock. Baro is seen as he boots a first-half field goal to give Hancock an early lead over Antelope Valley College in 2016. Baro also went 5-for-5 on point-after tries in the Bulldogs' 38-17 win in that game.

Having rediscovered his passion for soccer after two years away from the sport, Maisen Baro was the goalkeeper for the 2019 Hancock College men’s soccer team.

Now Baro is attending school, and playing soccer, at William Penn University, an intercollegiate NAIA school in Oskaloosa, Iowa. Baro was in goal for the Statesmen when they opened their season Saturday.

Swain was dominant at VCA, using her rare combination of size and skill to power the Lions to Coast Valley League titles and a career-defining CIF Southern Section championship in 2014.

He said that he received a partial soccer scholarship and enough other financial aid that “just about all of my costs for attending school here are covered.”

Baro hopes William Penn, a non-profit, private school located about an hour southeast of Des Moines, will be the next stop on the way to a professional soccer career.

“I really do think I can play at the next level, and I thank God for the ability he has given me to play this game.”

Maisen Baro comes from a soccer family (his father, Manuel Baro, has coached the sport for some 20 years), and in 2019, Maisen Baro was in goal for Hancock while his younger brother, freshman Myles, played striker.

Lompoc High's next big-time running back has arrived

Maisen Baro was a Hancock goalie in 2016 after graduating from Righetti High School earlier that year.

During his time away from the game, “I realized my passion for soccer,” said Maisen Baro. “It’s in my DNA.”

Baro is a sports medicine major at William Penn. If a professional soccer career does not pan out for him, Baro wants to give back to his native Santa Maria Valley by starting a non-profit center for children here.

“It would be sports-oriented, but the kids just need teachers to guide them in the direction they need to go, give them the direction to follow their talents and keep them away from gangs,” Baro said.

From the Vault: Alan and Blaine Johnson's journey from Sisquoc to NHRA stardom

“There is so much talent in (the Santa Maria Valley).”

Baro said he had offers from other schools but chose William Penn because, “I wanted to go somewhere out of state. I wanted a new experience.

Baro said that Statesmen co-coach Youri Dos Santos stayed in touch with him to help him get acclimated to William Penn and, “Being on the team is a great experience. Kids from all over are here.”

With a campus enrollment that was listed at 1,050 in 2019, William Penn University seemed to be in a good position to hold in-person classes for the 2020 fall semester, and the school has been able to do just that.

Having done the virtual distance learning thing at Hancock since March, when schools statewide closed because of the pandemic, Baro said he was ready to get back to the classroom.

“The classes are small and we all wear masks, but it’s fine.

“I like being able to get a question answered by a professor right away,” Baro said. “It’s just more efficient.”

He said he is well aware that there is winter in Oskaloosa, Baro said. That is one reason he chose to go to William Penn.

“I haven’t gotten my winter wardrobe yet, but when winter comes I’ll be ready to go,” said Baro. “I’ve never seen snow falling, and I’m looking forward to it.”

Bailey: Are area schools on the right track in restarting?

St. Joseph High started last week. Lompoc and Cabrillo are planning to start next week, on Sept. 8. Santa Ynez has set Sept. 14 as its date while the Santa Maria Joint Union High School District announced Tuesday that it will resume on Sept. 21.

“Cal State Monterey Bay is the school I wanted to go to,” Armani said. “I didn’t want to go anywhere else.”

From the Vault: Follow the Balderas brothers' boxing careers from youngsters to pros

They both started boxing when they were 8 years old. One of the first times they appeared in this newspaper, was in July of 2007. Jose was 11 and Carlos, then going by the given spelling of his first name, was 10. They both attended Liberty Elementary. Karlos had just won his age group in the 65-pound weight class at the Desert Showdown in Coachella. Jose took first place in his 11-12-year-old age group in the 65-pound division.

What you need to know for Tuesday, September 8