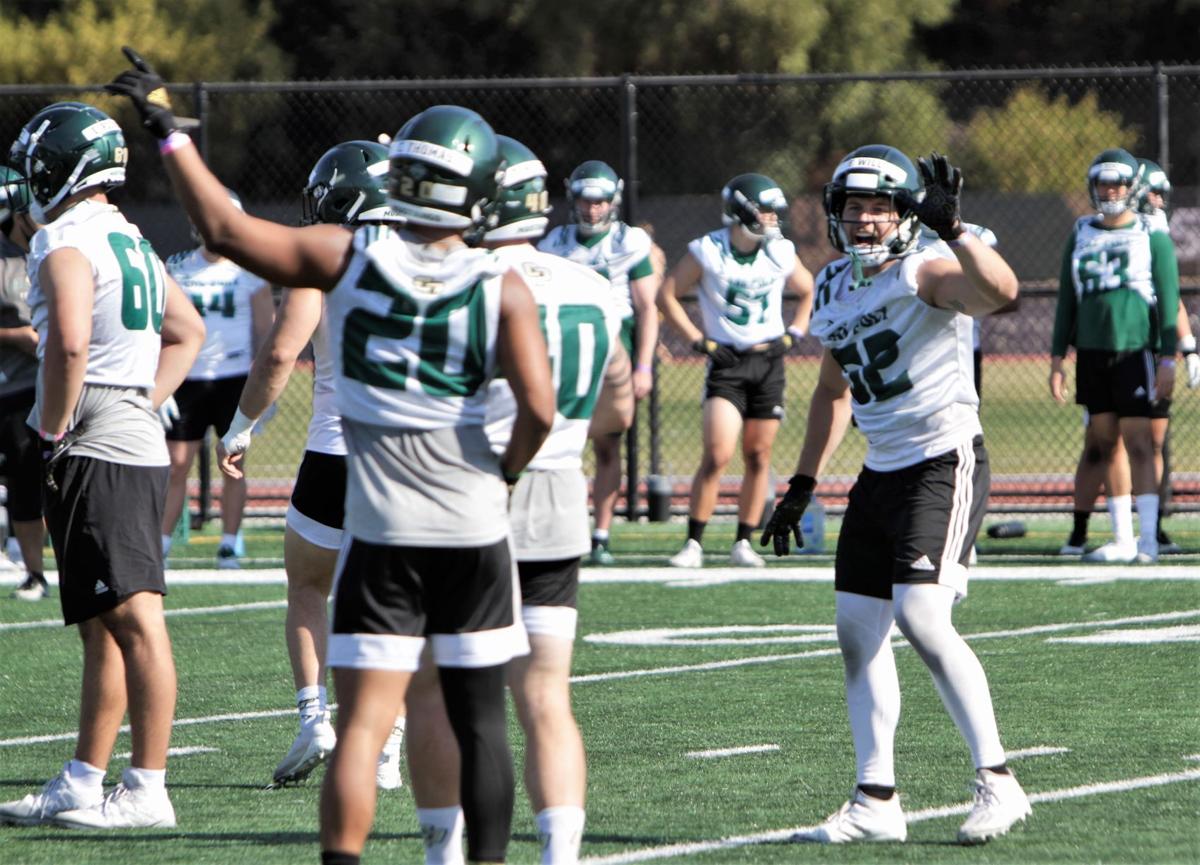 Cal Poly linebacker Fenton Will, right, helps line up the Mustang defense during a fall ball practice at Doerr Family Field in San Luis Obispo. Will is entering his fourth season with the Mustangs. 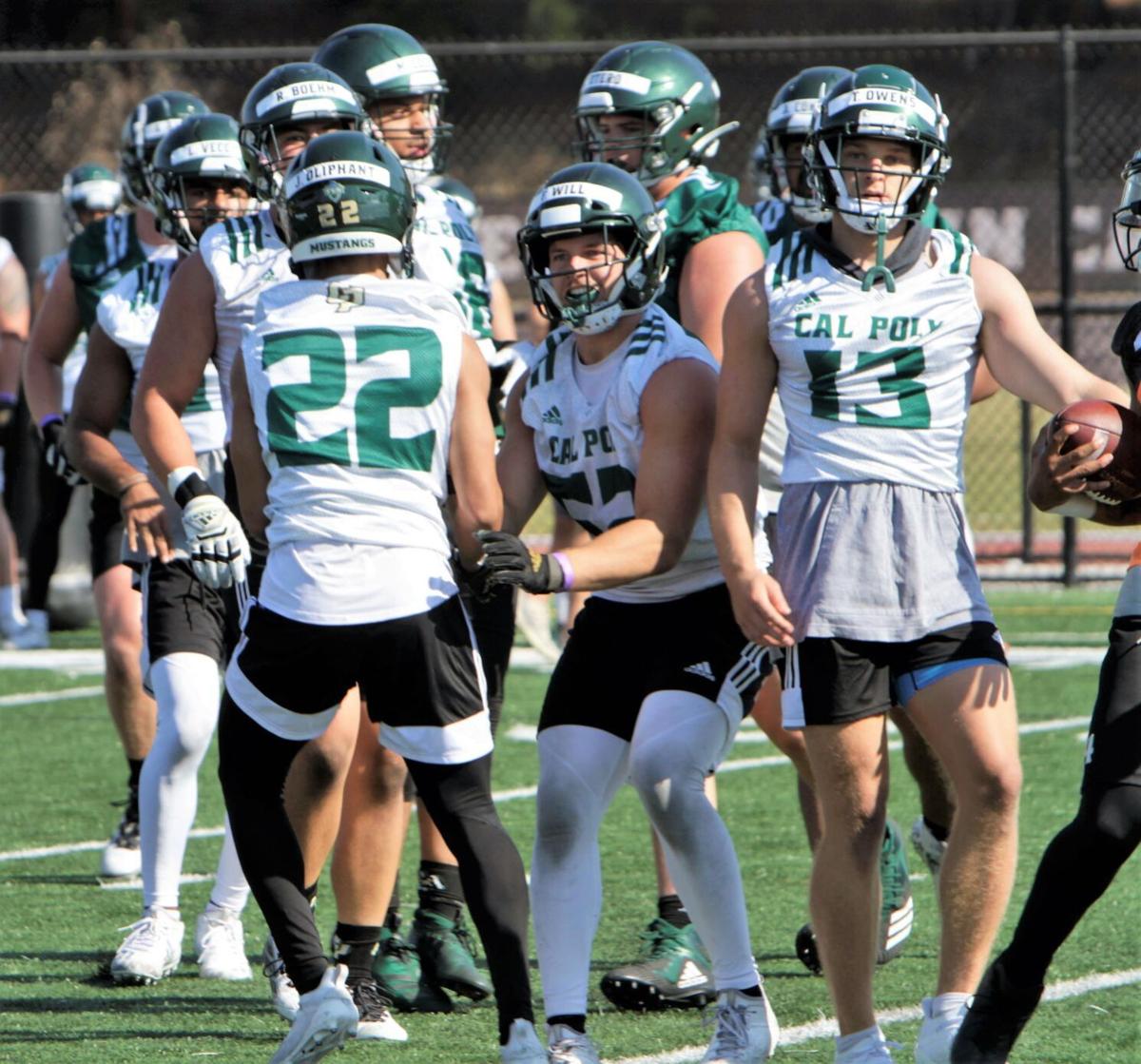 The Cal Poly defense, including linebacker Fenton Will, center, reacts after a run by quarterback Jalen Hamler at a fall practice in San Luis Obispo. 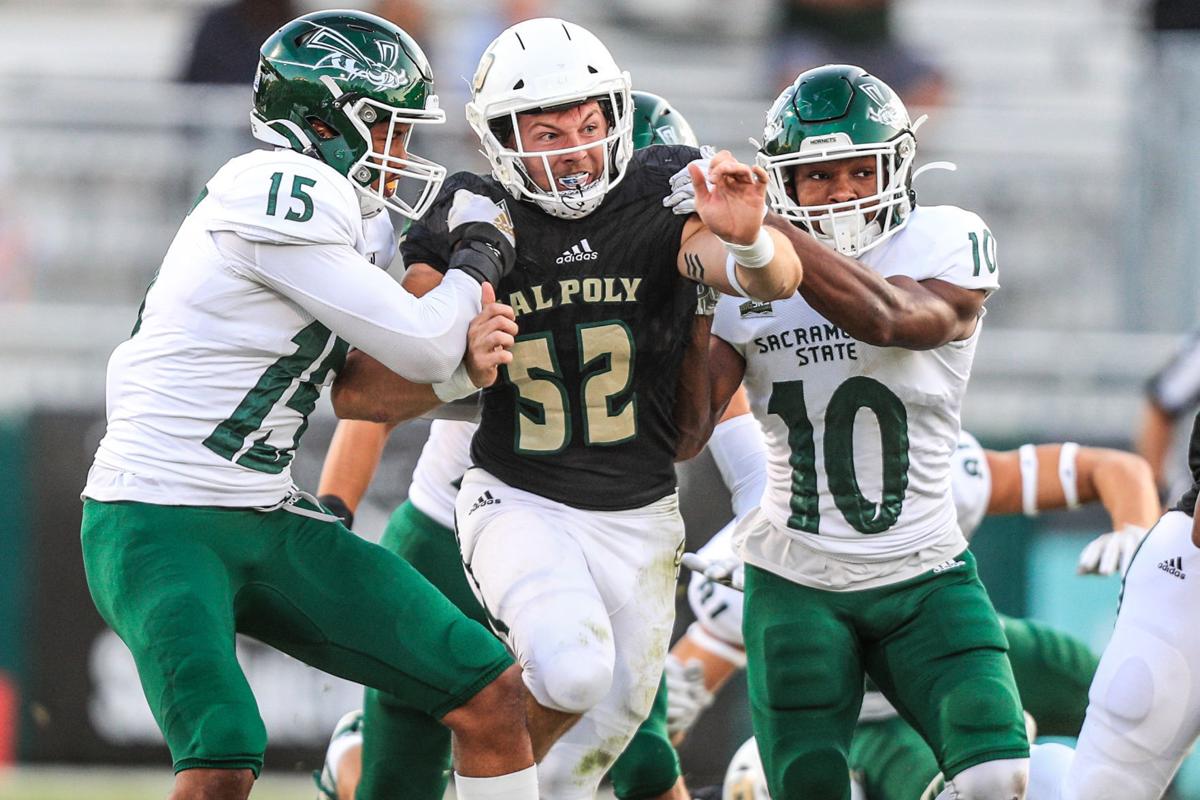 Cal Poly's Fenton Will fights through Sacramento State blockers during a Big Sky Conference football game at Alex G. Spanos Stadium in San Luis Obispo last October. Will was a standout linebacker at St. Joseph before breaking into the rotation at Cal Poly last season. 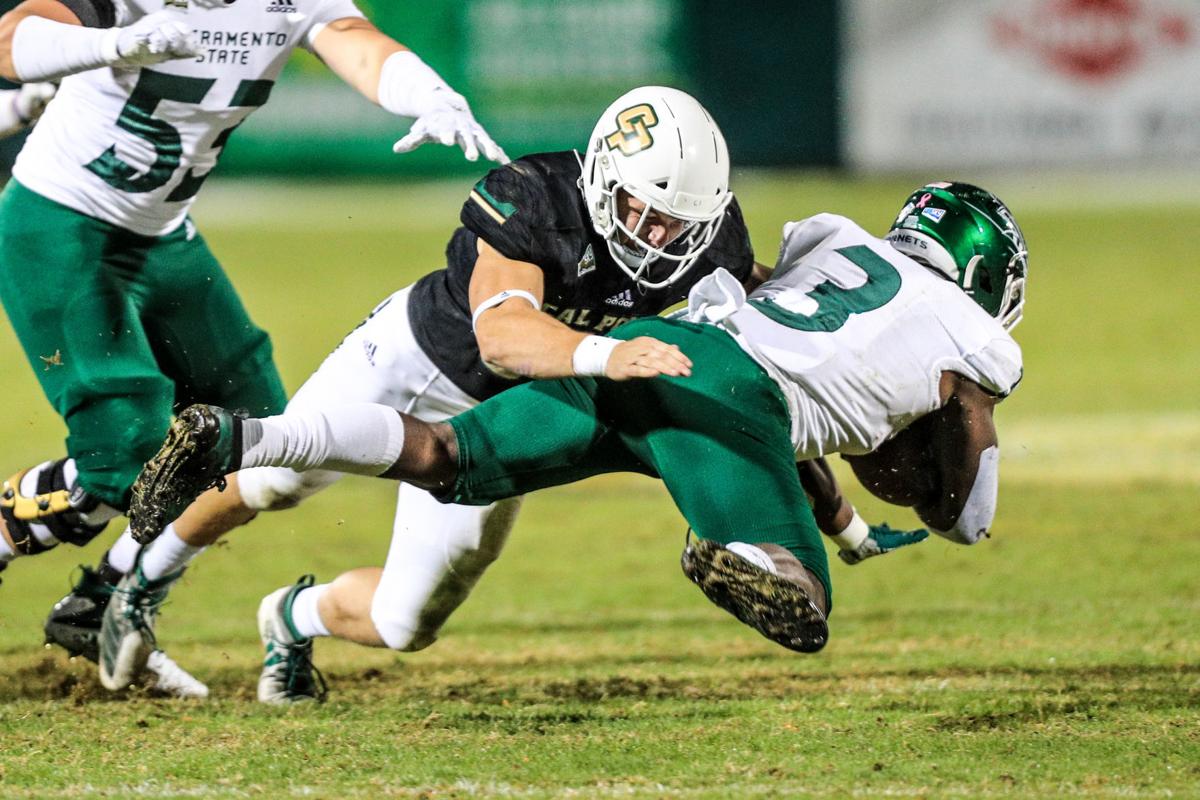 Fenton Will has waited patiently for his turn on the Cal Poly defense.

In 2019, as a redshirt sophomore, Will made his biggest impact to date with the Mustangs.

The 6-foot, 225-pound linebacker played in 11 games, making three starts, while making 38 tackles. Will had seven tackles in eight games in 2018.

Now, after a long layoff due to the coronavirus pandemic, Will is chomping at the bit to get back on the field for the 2021 spring season... and a potential 2021 fall season.

"I can't wait to play as much football as I've got left," Will said at Cal Poly's fall camp. "As long as the NCAA lets me play, I'm here to play. I love this game, it's given me a lot of opportunities in my life.

"So, in the next year, I'm hoping to get two seasons in."

Cal Poly's 2020 season was canceled due to the pandemic and a six-game Big Sky Conference slate was released earlier this month. Cal Poly's spring season is scheduled to start Feb. 27 vs. Southern Utah. Cal Poly would then play a complete fall season later next year.

"We've taken so much time off, it feels good to be back playing football after training on our own for so long," Will said during camp. "Everything feels like it's starting to come together, so it's exciting."

Will, who is in his fourth year at Cal Poly, says he's done quite a bit growing up since graduating from St. Joseph.

"You come out of high school and you think you know everything," Will said. "But I think I've changed and I've grown a lot. As a football player, I've developed my skills to a new level and I'm really lucky to be able to play this game still."

Will hopes to make a big impact in 2021. He returns to a linebacking corps that is the leader of the Mustang defense. Matt Shotwell led the team with 89 total tackles and 7 1/2 tackles-for-loss last year and returns as a junior. Three linebackers return to Cal Poly after making five or more starts last year, including Shotwell and juniors Joey Ruiz and Aaron Cooper.

The Mustangs lose five defensive backs that made five or more starts in 2019. They return three defensive linemen who started at least five games last year. Will said the new coaching staff installed by first-year coach Beau Baldwin has switched up the defense.

"We've got a ton of changes, we've totally switched up our whole scheme," Will said. "I think we're really coming together. It's going to take time but our communication on the field is good. The linebackers have more responsibility than in the past, which is something we all really like."

The Mustangs have four other linebackers who return after playing in at least six games a year ago, including another St. Joseph graduate Timothy Miller, who is now a red-shirt sophomore. Corey Thomas, Lance Vecchio and Laipeli Palu are also expected to contribute at the linebacker positions.

From the Vault: Charting Vai Taua's rise to football stardom

"The beauty of this defense is that the inside linebackers can play either spot," Will said. "So I've played a little field side, a little boundary and we're going to switch it up. (The coaches) are always keeping us on our toes in case someone gets coronavirus or someone goes down. Everyone is ready to play Mike or Will (linebacker)."

Though there's a new coaching staff and the team is coming off a 3-8 campaign from 2019, Will feels there's some major momentum building in the program, especially with Baldwin at the helm.

Baldwin spent nine seasons at Eastern Washington and won an FCS title there in 2010. Baldwin comes to Cal Poly after spending the last two seasons as Cal's offensive coordinator.

Righetti principal Karen Rotondi notified parents in an email Wednesday night. St. Joseph High School, which did begin on-campus instruction weeks ago, shut down its campus and switched back to distance after learning a student at that school had tested positive for COVID-19, also after attending a Halloween party.

"I think this team and this coaching staff are capable of winning championships," Will said. "I know it's the first season with the new coaches and it might be a bold statement, but we're going to be bold."

Case Bruton had no illusions about his role on the basketball court. He wanted to score. And score he did.

Mickey, who graduated from Arroyo Grande High School in 2016, is a senior on the Mustang football team. He's also set to graduate this spring after majoring in Recreation, Parks and Tourism Administration while simultaneously earning minor degrees in both Psychology and Sales.

Cal Poly linebacker Fenton Will, right, helps line up the Mustang defense during a fall ball practice at Doerr Family Field in San Luis Obispo. Will is entering his fourth season with the Mustangs.

The Cal Poly defense, including linebacker Fenton Will, center, reacts after a run by quarterback Jalen Hamler at a fall practice in San Luis Obispo.

Cal Poly's Fenton Will fights through Sacramento State blockers during a Big Sky Conference football game at Alex G. Spanos Stadium in San Luis Obispo last October. Will was a standout linebacker at St. Joseph before breaking into the rotation at Cal Poly last season.