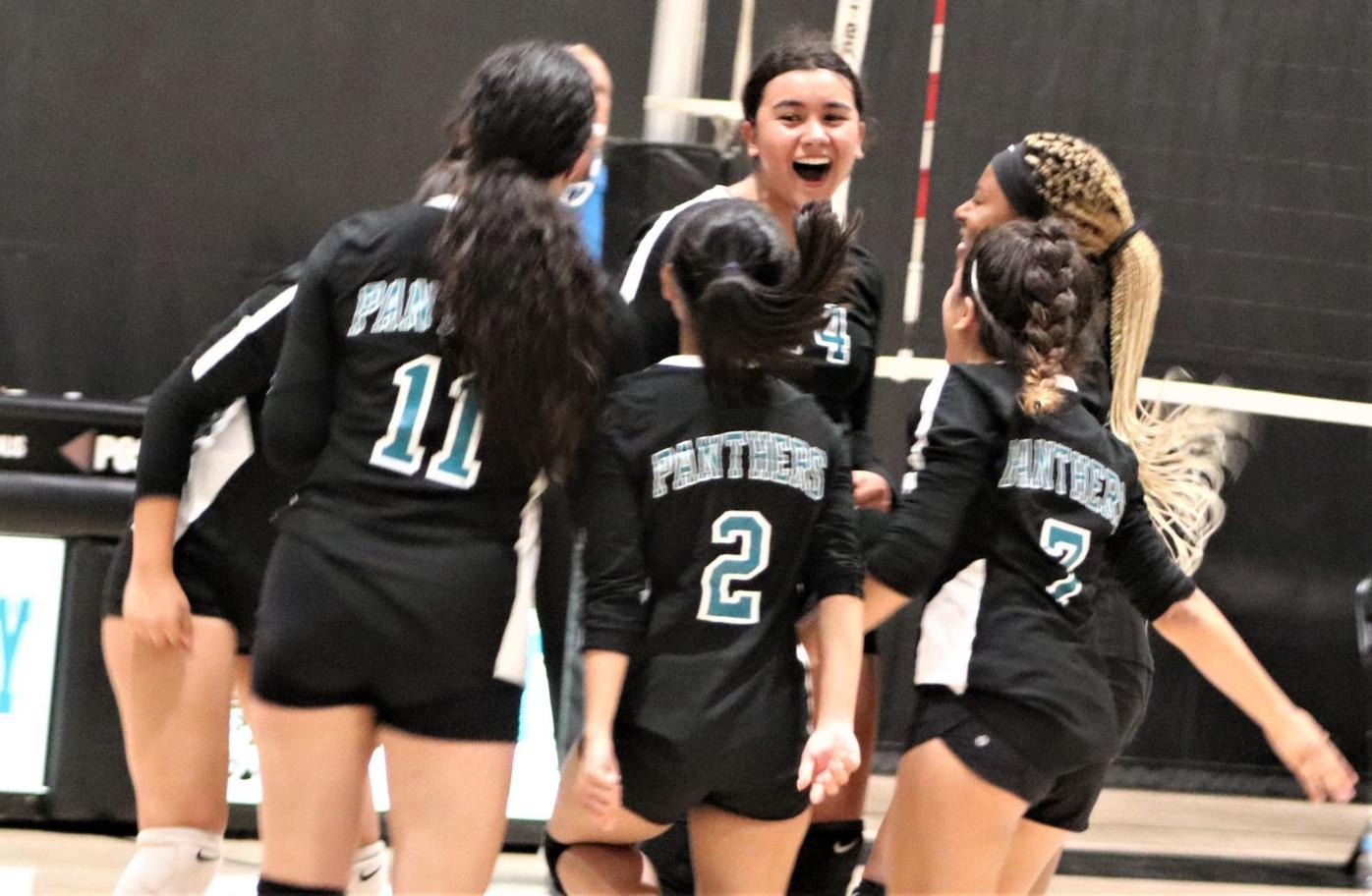 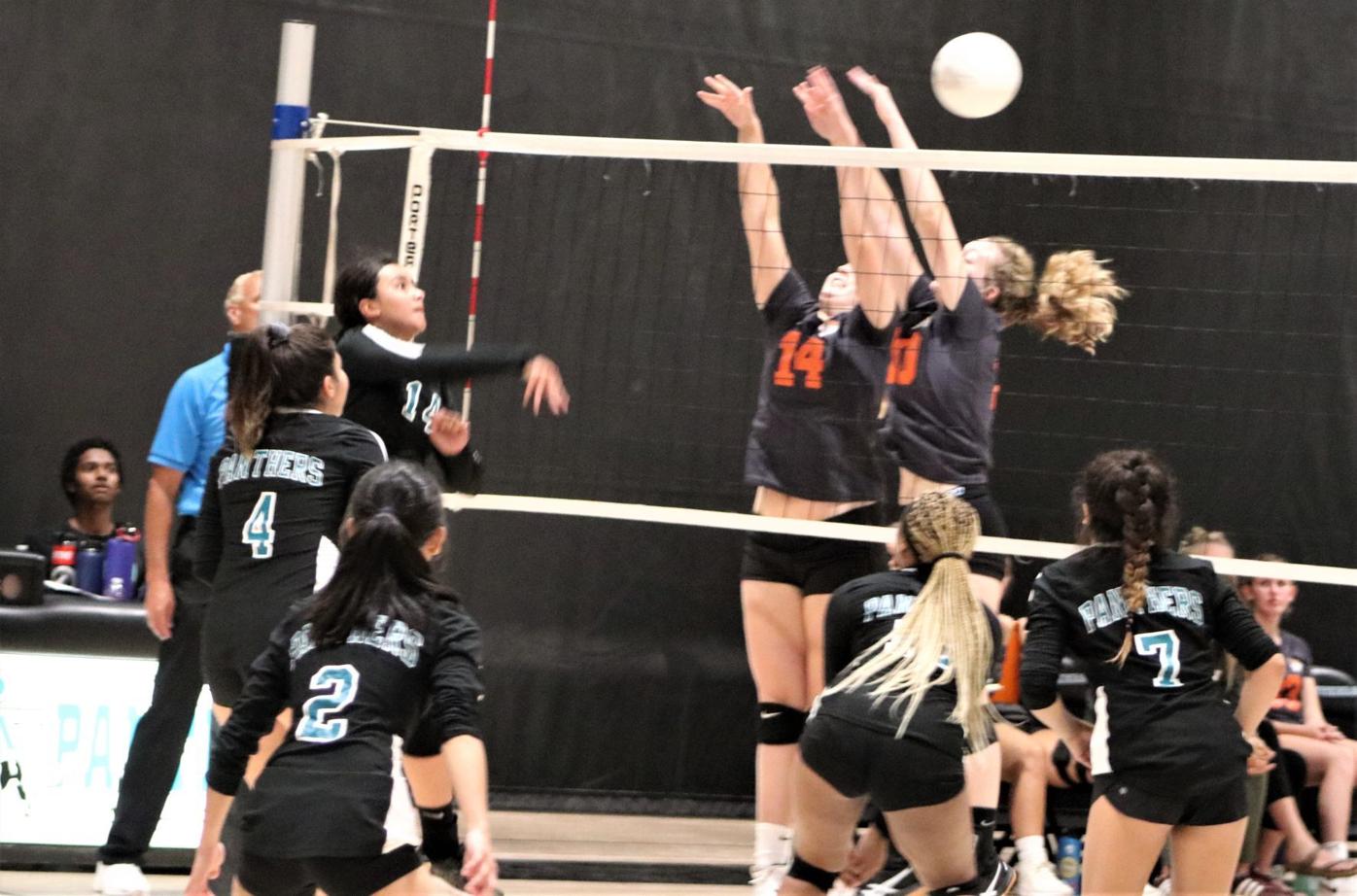 “That shot, it was amazing,” said Ramos. “To know that you can come back from being down so far is awesome. We really had to push ourselves and we did it.”

Led by the Panthers’ Amaya Yebra's nine aces, Santa Ynez had few answers for the strong serving of Pioneer Valley.

Despite an early run that saw the Pirates go out to a 12-3 first set lead, the Panthers hung in there, battling back with a 6-0 run to get them back in the set.

At 25-all, Santa Ynez’s Bradley blasted a kill shot and when Lauren Swing blacked a Pioneer Valley kill attempt, the Pirates closed out the first set.

But behind the strong serving of the Panthers’ Yebra, in a run that included four straight aces, Pioneer Valley tied the set at 14.

Tied at 16, Santa Ynez won the serve and then Natalie Robles served out the set and things were looking bad for Pioneer Valley.

The Panthers turned the match around in the third set.

Rebecca Escobar and Haezel Ortega led an early serving surge to put the Panthers up 8-3.

Santa Ynez kept battling and got the score to 13-10 before Pioneer Valley pulled away.

The fourth set was a constant back-and-forth battle.

But at 18-all, the Panthers got another Ortega ace, a kill from Yebra, a block from Ramos and a ball into the net by the Pirates put Pioneer Valley into firm control.

Ramos tipped a ball over the net that fell in for the set’s final point.

The fifth set was tied at 5 when the Panthers went on a roll.

Yebra got it rolling with a an ace followed by a Ramos kill, two more aces and a Basulto kill for a 13-5 lead.

Pioneer Valley closed out the win with another Basulto kill and Ramos’ final blast.

“The girls never gave up,” said Pioneer Valley coach Nikki Knowlson. “We, as coaches, knew they weren’t quitters. I think they proved it to themselves that they can come back from anything if they just fight.”

“Our girls weren’t expecting the fight they put up tonight,” said Santa Ynez coach Tom Wright who had to play the match without his leading inside blocker, Kylie Clouse who was out with a minor injury. “Pioneer Valley played an exceptional game and really put us on our heels. I think they wanted it more.”

Katrina MacKinnon and Kapri Espinosa had 11 and five kills respectively for the Warriors.

The Spartans (2-7, 2-2) were able to withstand a doubles sweep for the Panthers by winning five of the six singles sets between these crosstown rivals in a Mountain League match at Hancock College.

In the doubles sets, Samantha Ramirez and Ashley Barbosa won 8-4 at No. 1, Tabitha Ortiz and Nicole Estrada won 8-2 at No. 2, and Ange Rivas and Fatima Nunez won 8-2 at No. 3 for Pioneer Valley.

With Orcutt having clinched the win in the singles portion of the match, doubles sets followed an eight-game pro set format.

The Royals defeated the Titans (2-2 Ocean League) in a league match at Mission Prep.

Morro Bay won this battle of Pirates in a cross-section match at Morro Bay.

Lilly Mazza won in straight sets for Santa Ynez at No. 6 singles and teamed with Camilla Curti for a win at No. 3 doubles.

Clara Newton and Isabella Curti won at No. 2 doubles for Santa Ynez, and Alexa Yacoub prevailed at No. 2 singles.

Morro Bay out-scored Santa Ynez 4-2 in singles. Since Morro Bay, a member of the CIF Central Section, was the home team, the match followed a Central Section format.

The Eagles blanked the Saints in an Ocean League match at Templeton.

Medalist Claire Alford shot a 39 for Righetti over nine holes on the par 35 Rancho Maria course, and the Warriors (3-2) beat the Royals in a non-league match.

The Knights defeated the Saints in an Ocean League match at Santa Maria Country Club.

The Spartans beat the Pirates in an Ocean League match in blustery conditions at Rancho Maria Golf Course.

Orcutt Academy's Karli Lundberg was the medalist in the nine-hole match with a 43. Teammates following were Mellisa Burns (50), Luna Sahagun (54), Lauren McClung (62) and Grace Howard (65).

APTOS — The Bulldogs (1-4-0) dropped their fourth straight with a non-conference road loss to the Seahawks.