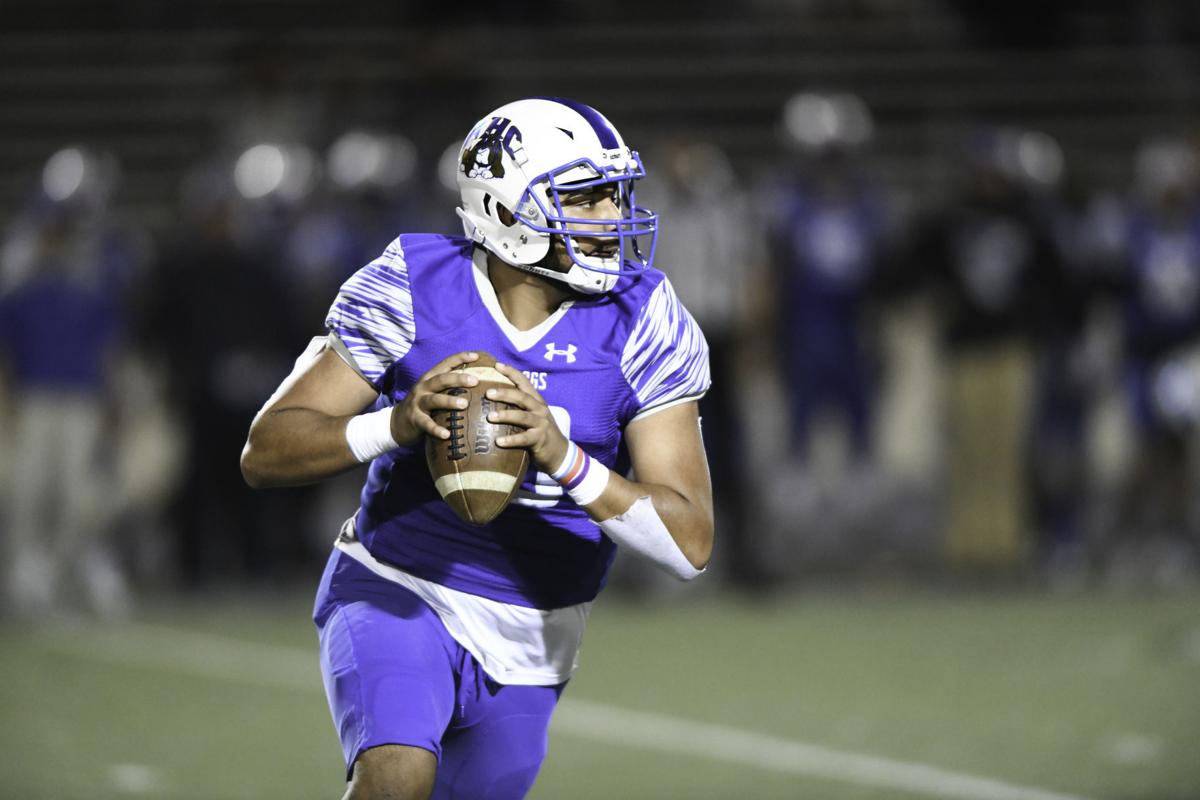 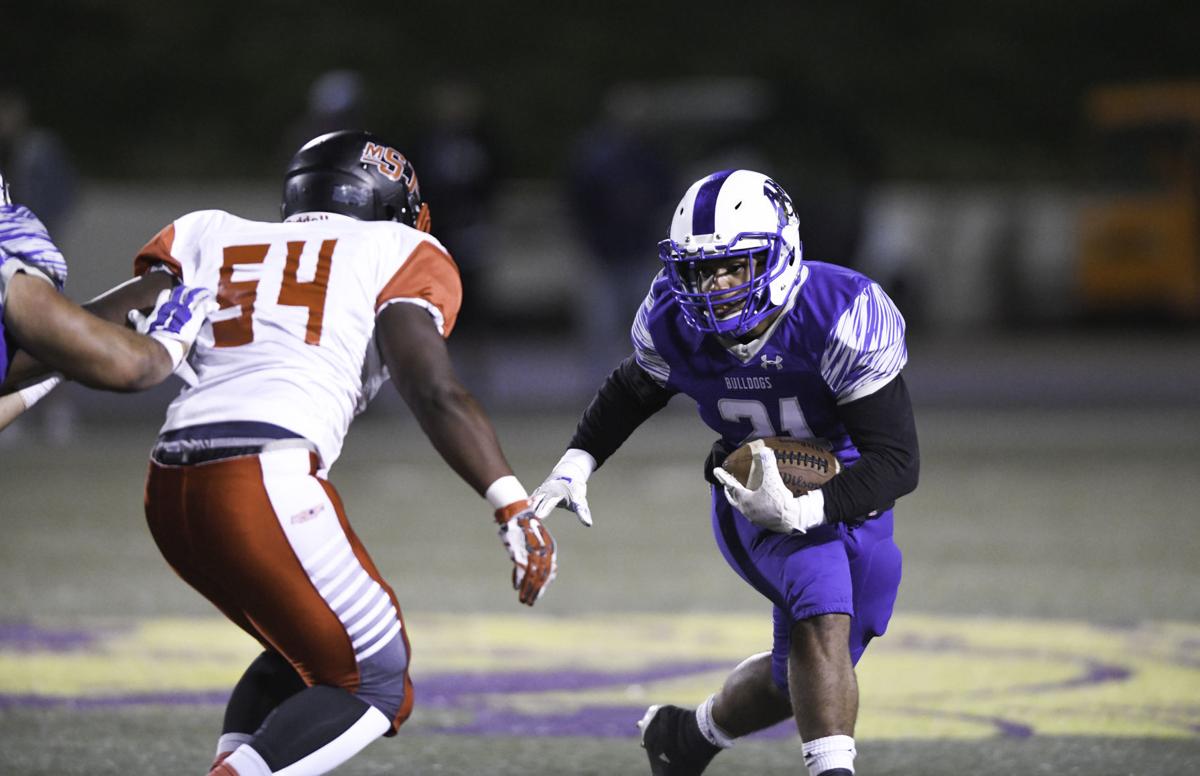 In order for the Hancock College football team to earn its second consecutive bowl win, all Bulldogs quarterback Matt Garcia had to do was literally run out the clock.

Garcia ran around in the backfield, taking enough time to ensure Hancock didn’t have to run another play. He finally went down on his own 35 and the Bulldogs started celebrating a 14-9 win over Mt. San Jacinto College in the 2019 Western State Conference Bowl at Righetti High School.

The Eagles were out of timeouts and were thus powerless to stop the clock. Garcia knew it so, untouched, down he went after he was sure enough time had elapsed.

The Bulldogs held off San Bernardino Valley College 38-35 at Righetti to win the 2018 American Championship Bowl. That team finished 10-1 and missed a perfect season by two points.

The 2019 Hancock team finished 9-2 and won its last seven games. The Bulldogs defense never gave up more than two touchdowns in any game during that span.

This is another in a series we are putting together highlighting the top games of the past 20 years. Today, we take a look at Hancock's 2019 season-ending win over Mt. San Jacinto, giving the Bulldogs another bowl game win to cap another impressive season.

Hancock back DJ Whitmill was the 2019 Western State Bowl MVP.

After gaining a total of three yards on two rushes in the first half, Whitmill, the leading rusher in the Pacific League, finished with 60 yards on 11 carries.

Hancock was the third seed in the American Division. Mt. San Jacinto, which finished 8-3, was seeded fourth.

Desmond Newkirk scored what turned out to be the winning touchdown on a four-yard run at the 3:17 mark of the third quarter.

The Hancock College defense will face by far its stiffest challenge in weeks Saturday night.

Brett Virgil and Alonzo Bell answered for the Eagles. Virgil hit Bell for a 15-yard touchdown pass on the last play from scrimmage in the third quarter. The point-after kick missed.

After stopping the Bulldogs on downs in the fourth quarter, the Eagles drove from their 8 to the Hancock 36. EJ Barrera halted the drive there when he broke up Virgil’s fourth down pass.

“I seen where he wanted to throw it and I was able to get a hand on it,” Barrera said afterward.

Mt. San Jacinto’s Nicholas Sigilla kicked a 37-yard field goal on the first possession of the game for the only points of the first half.

Eddie Battle jump-started the Bulldogs when he took a short second-half kickoff at his 20 and returned it to the Eagles 43. Seven plays later, Garcia burned the over-pursuing Eagles.

The Hancock College football team bid farewell to the Pacific League Saturday by putting the wrap on a third straight unbeaten league campaign.

He flipped a short pass to tight end Jerome Afe. Afe, wide open on the left side, gathered in the pass and ran in to complete a 31-yard scoring play for the first touchdown of the game.

“Our defense has been good at bending but not breaking,” said Barrera, and the bend-don’t break thing served the Hancock defense well in its biggest game of the year.

Matthysse and Barrera, however, helped the Bulldogs keep Virgil from making enough big plays for the Eagles.

“He was the most challenging quarterback we’ve faced all year, no doubt,” said Barrera.

“We wanted to make him throw the ball, contain him, and we were able to do that.”

Hancock punter and kickoff man Cade England had delivered all year for the Bulldogs, and he did so again that Saturday night. He consistently put his kickoffs and punts deep enough to keep the Eagles from getting prime field position.

After mustering all of 45 yards rushing in the first half Hancock, which averaged 305 yards a game on the ground going in, ran for 160 yards in the second half.

“We made some adjustments,” Garcia said. “We went to a quicker tempo on the run, and it worked. We thought we could wear them down in the second half with our running game,” the way the Bulldogs wore opposing defenses down with the ground game in the second half most of the season.

Earlier that year, Hancock finished a third consecutive 5-0 Pacific League campaign. After winning their last 18 league games, the Bulldogs have been moved back to the rugged Northern League, where they were before their four years in the Pacific League, for the 2020 season.

With a little extra time on our hands, we are taking a look into the past of prep sports on the Central Coast. Our sports staff has been going through our archives searching for photos and stories highlighting some of the most pivotal games area teams have played over the last two decades.

You can support the hard work of our local sports team by signing up for a News+ Membership.

A few weeks after the deadliest fire in the United States in a century, and the deadliest in California history, the 2018 Camp Fire, Hancock C…

Justine Roland and Mariah Cooks had a lot of big nights together when they played for the Righetti girls basketball team. One particularly big…

When John Iribarren walked off the Righetti High School gridiron on a Thursday afternoon in late October of last year, he was unsure if his 59…

The score was tied at the 2:34 mark of the second overtime period of this 2017 title game when Santa Ynez freshman Emily Cunningham uncorked a…

Cameron Walker had at least the most decorated career a Righetti High School basketball player has ever had. Walker was all-everything before …

The St. Joseph boys basketball team was riding high in 2016. Then along came No. 4 Playa del Rey St. Bernard and their dynamic senior point gu…

He was an All-Western State conference point guard during his freshman season, and Shane Carney’s Hancock College basketball career was rollin…

The Righetti baseball team’s first playoff game in the CIF Central Section, in 2019, was a success. It was a success because Ryan Delgado gues…

Hard-throwing Righetti senior right-hander Katie Chenault was the Santa Maria Times All-Area MVP in 2013, and she showed all of that when her …

In 2017, a Santa Maria football team qualified for a sectional divisional championship football game for the first time this century. To get t…

Current professional marathoner Jordan Hasay had a lot of huge moments when she ran for Mission College Prep High School. One of the biggest f…

Central Coast Classic: The Cassidys adopt Leza and Hosanna in a touching act of kindness

On July 5, 2011, the Cassidys formally adopted two biologically unrelated youngsters in Ethiopia who would eventually become Leza and Hosanna …

Bidding to become the first Santa Maria football team ever to beat a Pioneer Valley squad, the Saints held a slight third-quarter lead in this…

In order for the Hancock College football team to earn its second consecutive bowl win, all Bulldogs quarterback Matt Garcia had to do was lit…

The Lompoc Braves went 1-9 in 2009, playing in the tough PAC 7 League with the big schools in the area under legendary coach Robin Luken.

Righetti senior right-hander Matt Sauer had an ERA of just over 1 going into this 2017 CIF Southern Section Division 3 semifinal, and it figur…

The Saints ended a major drought in 2017. For the first time in 60 years, Santa Maria High School captured a baseball championship.

Go through other stories highlighting Prep history on the Central Coast

From the Vault: Brad Memberto's career as a sports writer

There are many debates to be had on things concerning the Central Coast. However, there's one topic that, frankly, is not up for discussion. T…

From the Vault: Mark Brunell's journey from St. Joseph to the Rose Bowl and then the NFL

Mark. Brunell. The most successful NFL player from Santa Maria.

The Kansas City Royals will kick off their 2019 season a week from today with a home set against the Chicago White Sox.  For the first time si…

From the Vault: Robin Ventura's days as a hooper at Righetti

Dutra, who will stay on with the program as a coordinator, went 119-81 in his 19 seasons at Hancock and is the school's all-time wins leader.