The Harlem Globetrotters brought their unique brand of basketball showmanship to Santa Maria Thursday night with their “Pushing The Limits World Tour.”

A sell-out crowd of more than 2,500 people filled Hancock College’s Joe White Memorial Gymnasium to watch the spectacle as the Globetrotters posted another victory over the Washington Generals.

But these Generals aren’t hapless, as many might think.

The game itself was remarkably competitive with the Generals actually taking a 29-26 lead late in the first half before the Globetrotters closed out the half with a 6-0 run.

The Globetrotters added to the lead in the third quarter and slowly pulled away for the victory.

“This is so exciting,” said Hancock Athletic Director Kim Ensing. “Sold out, standing room only. It's great to have this many people in the gym. That’s what it’s for. This is giving us some great exposure in the community.”

The crowd began arriving three hours before the scheduled 7 p.m. tip-off, patiently waiting in line for the hi-jinks to begin.

Tickets holders with a Magic Pass got in early. 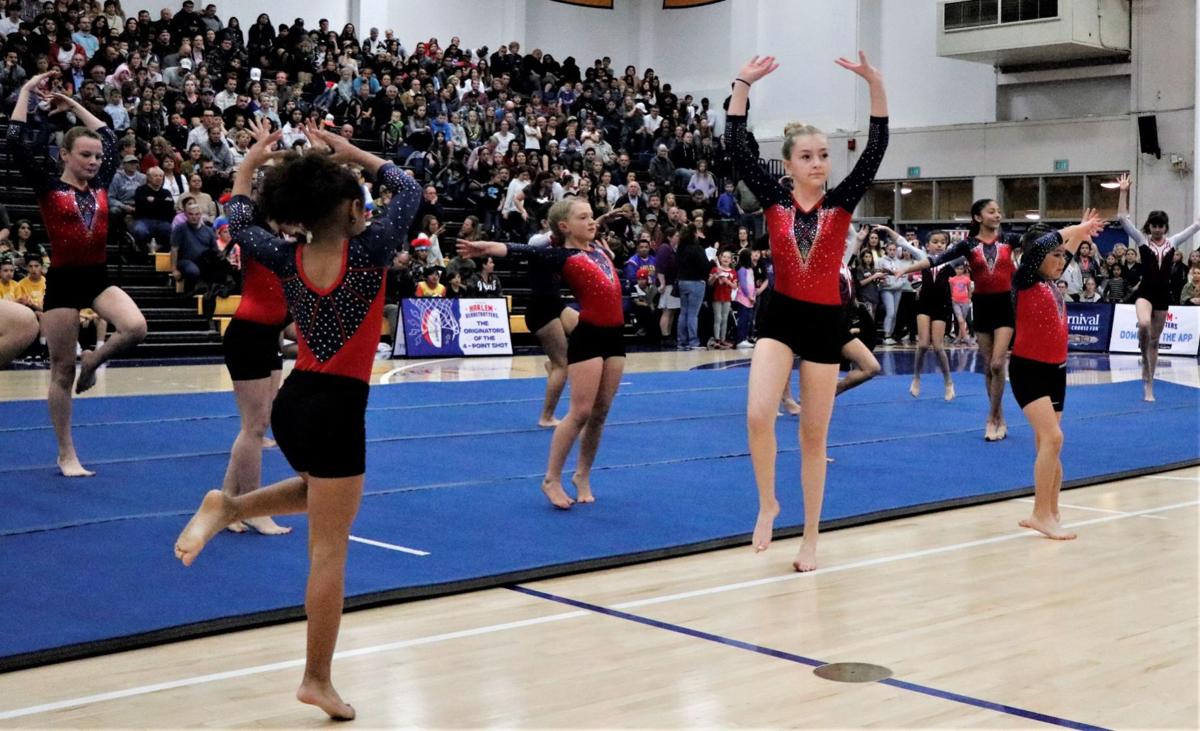 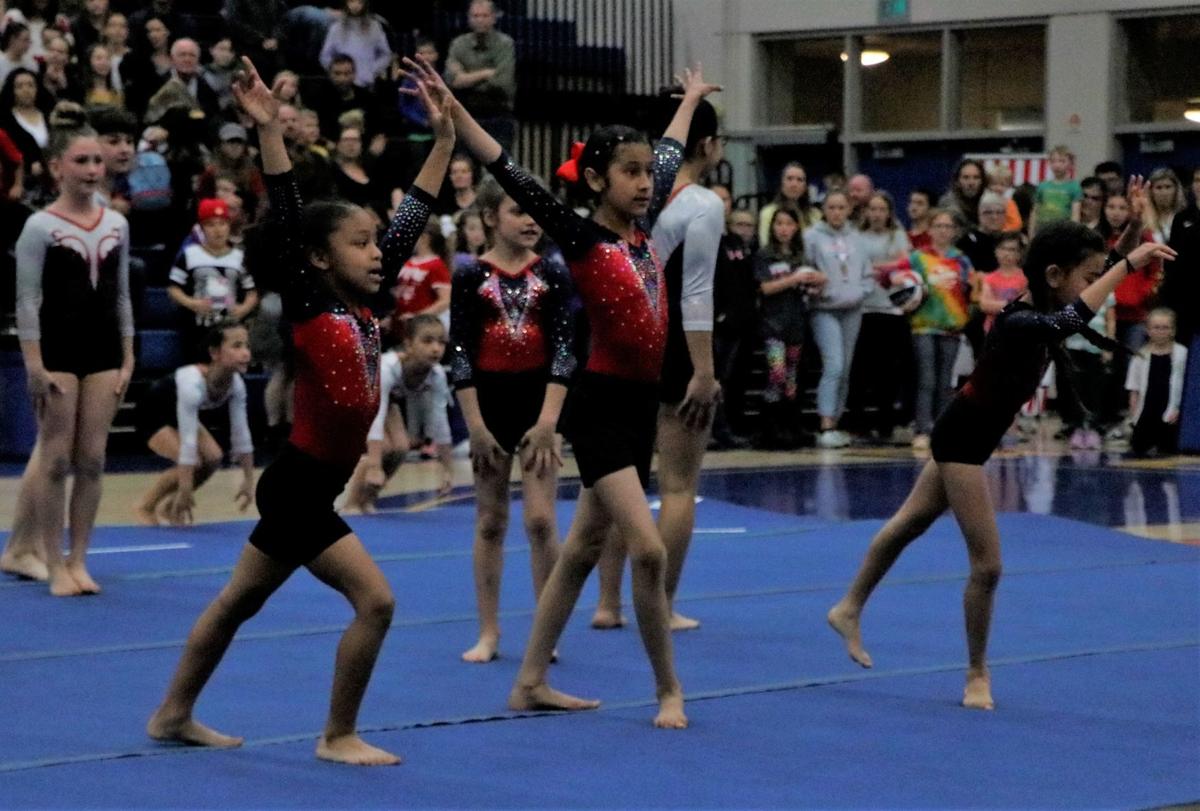 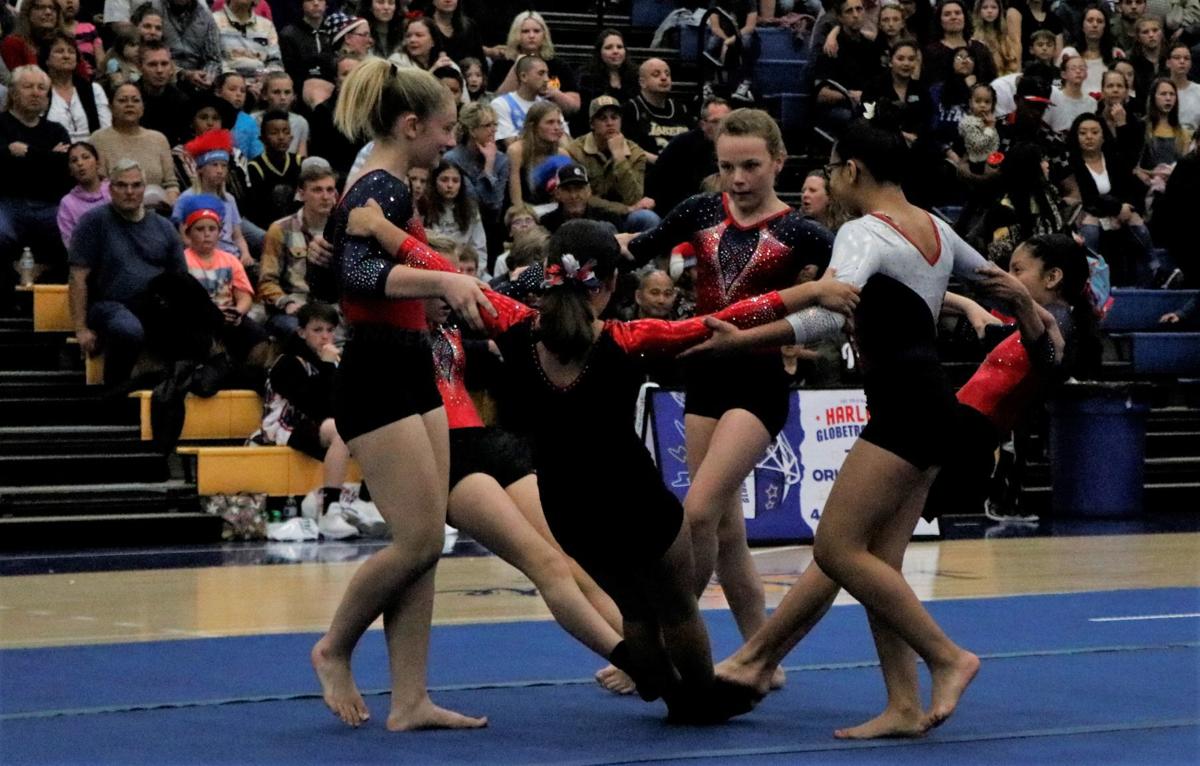 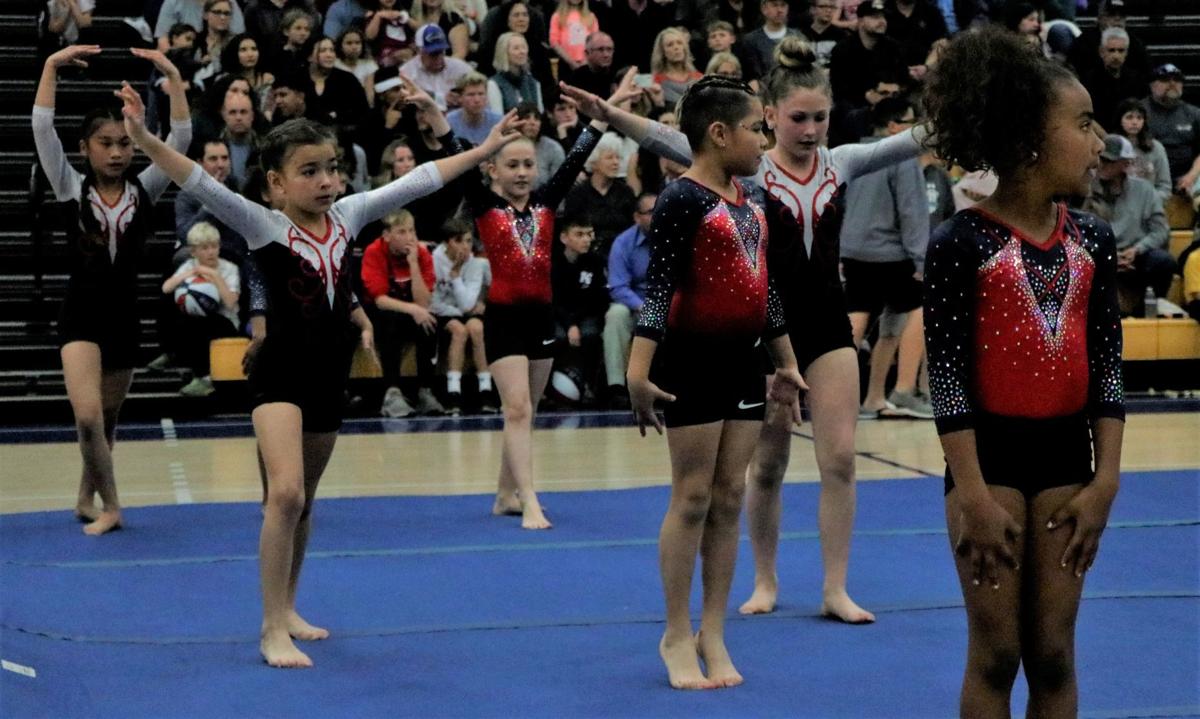 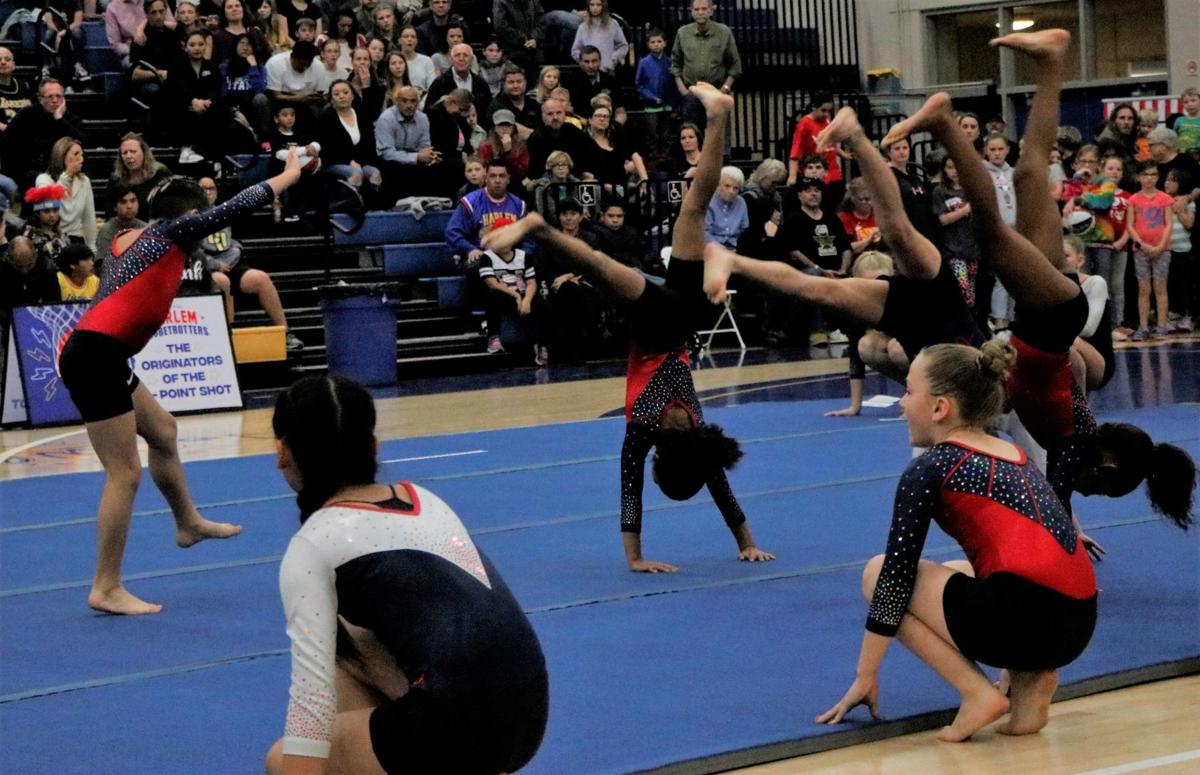 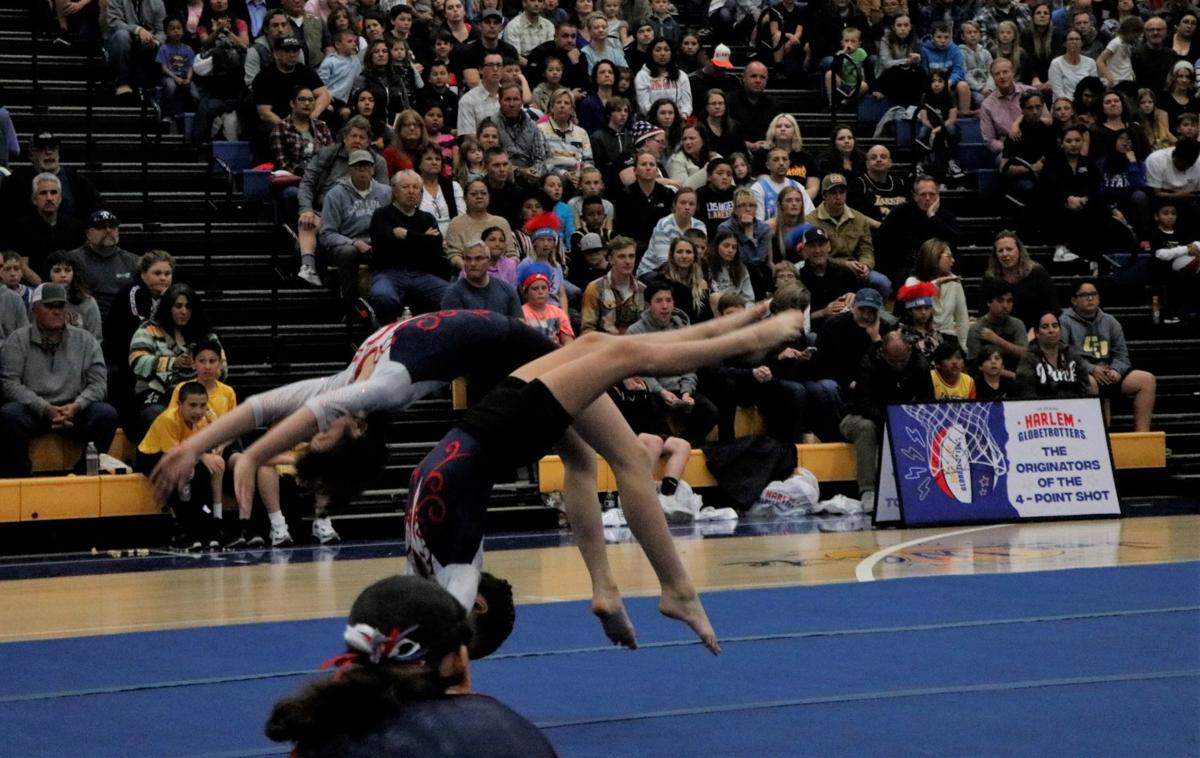 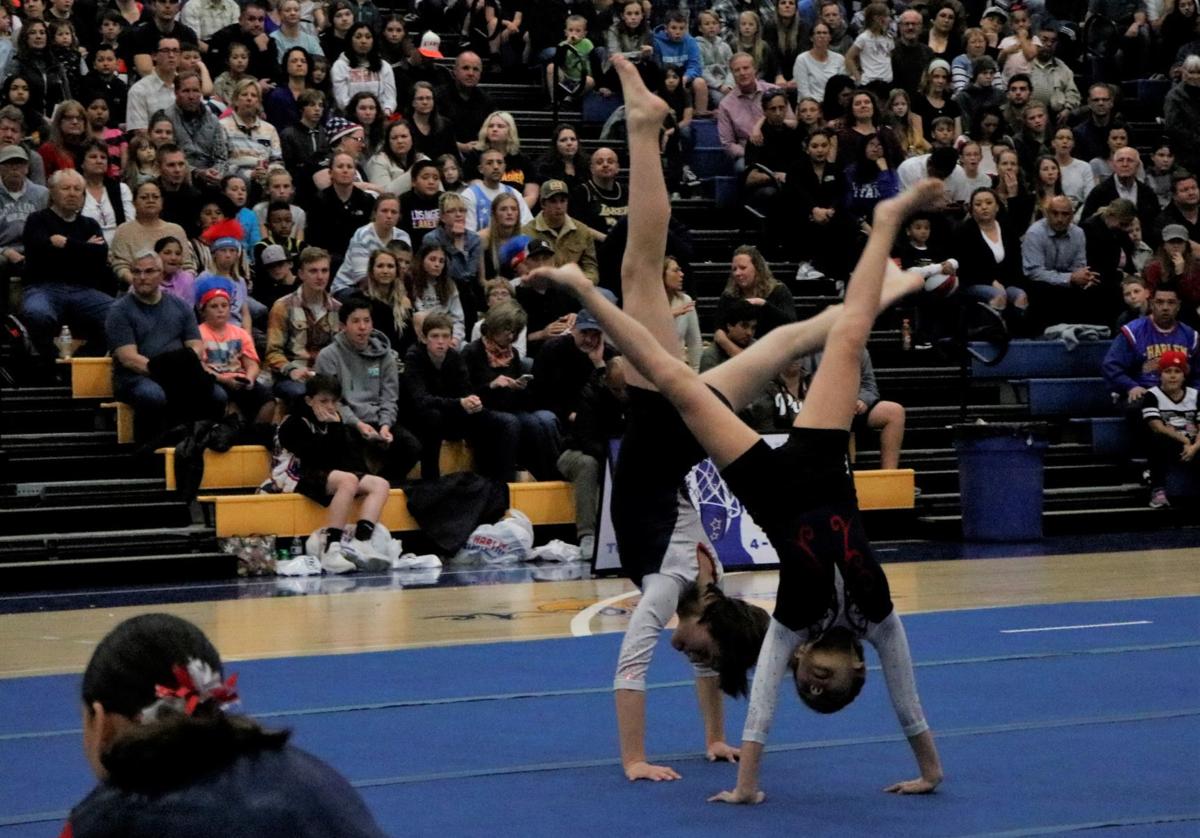 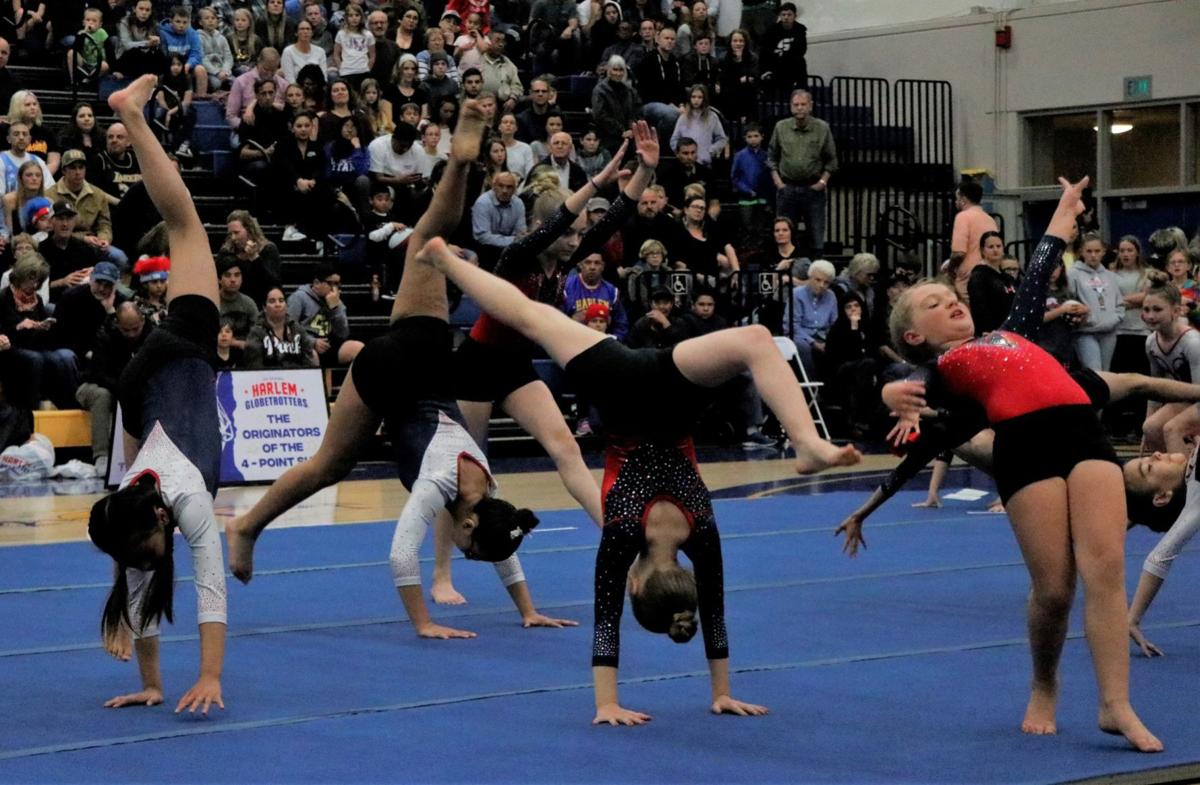 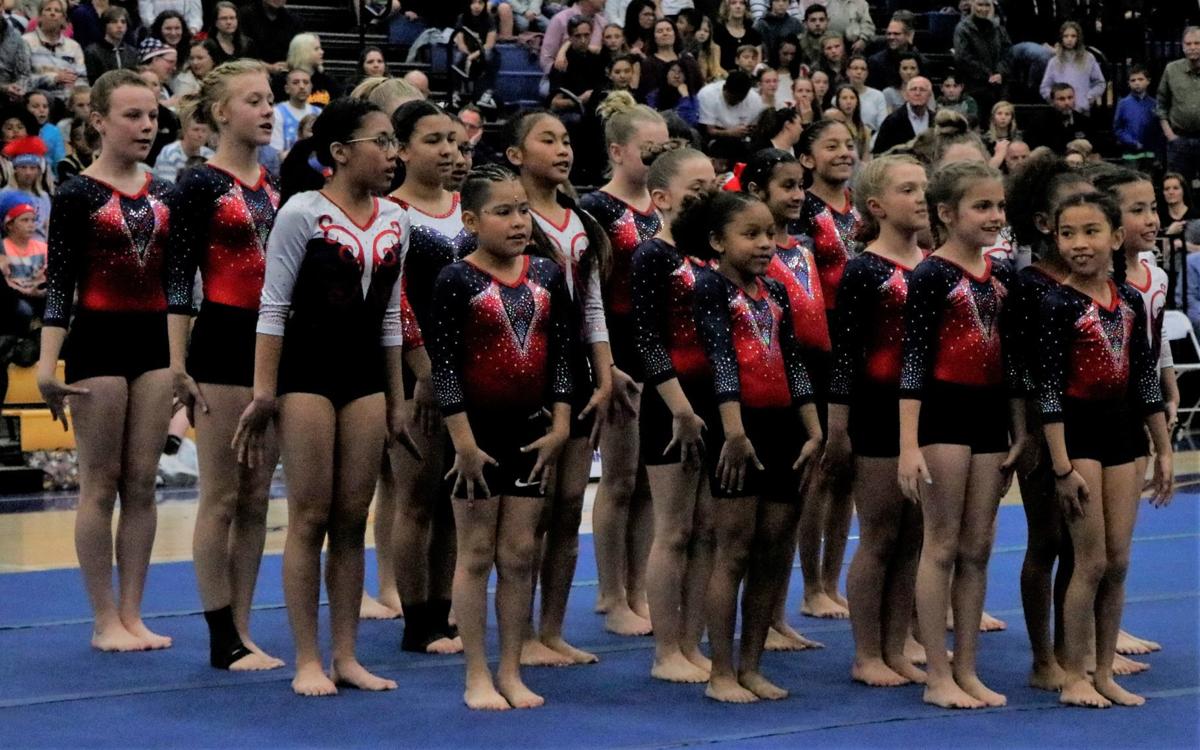 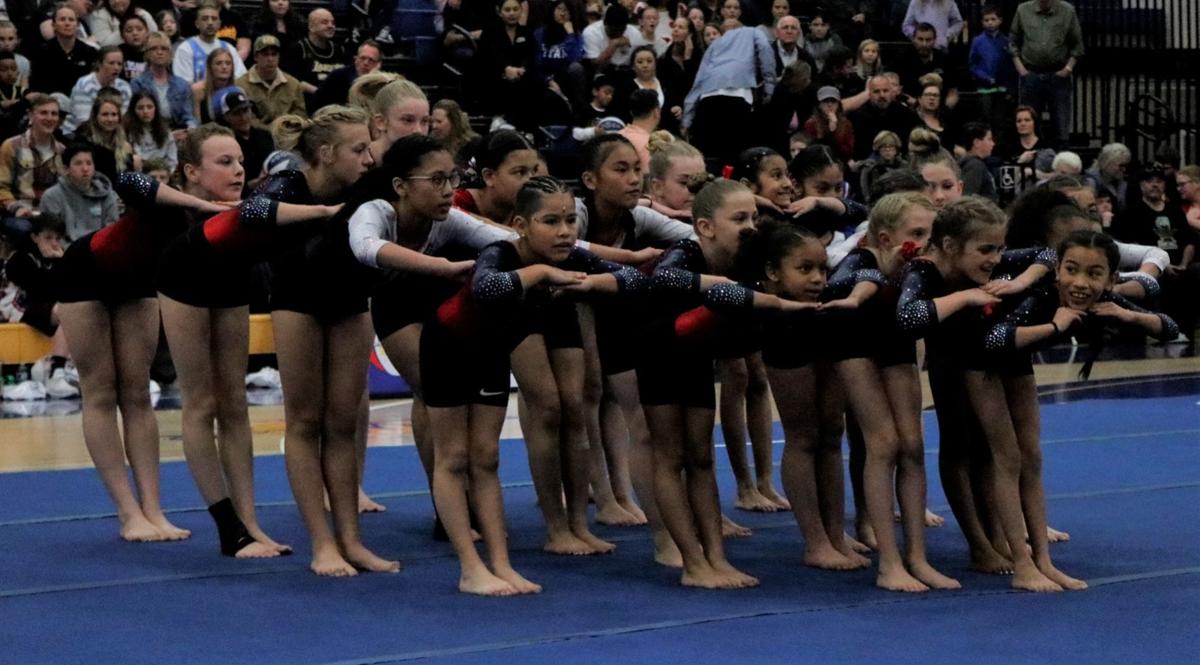 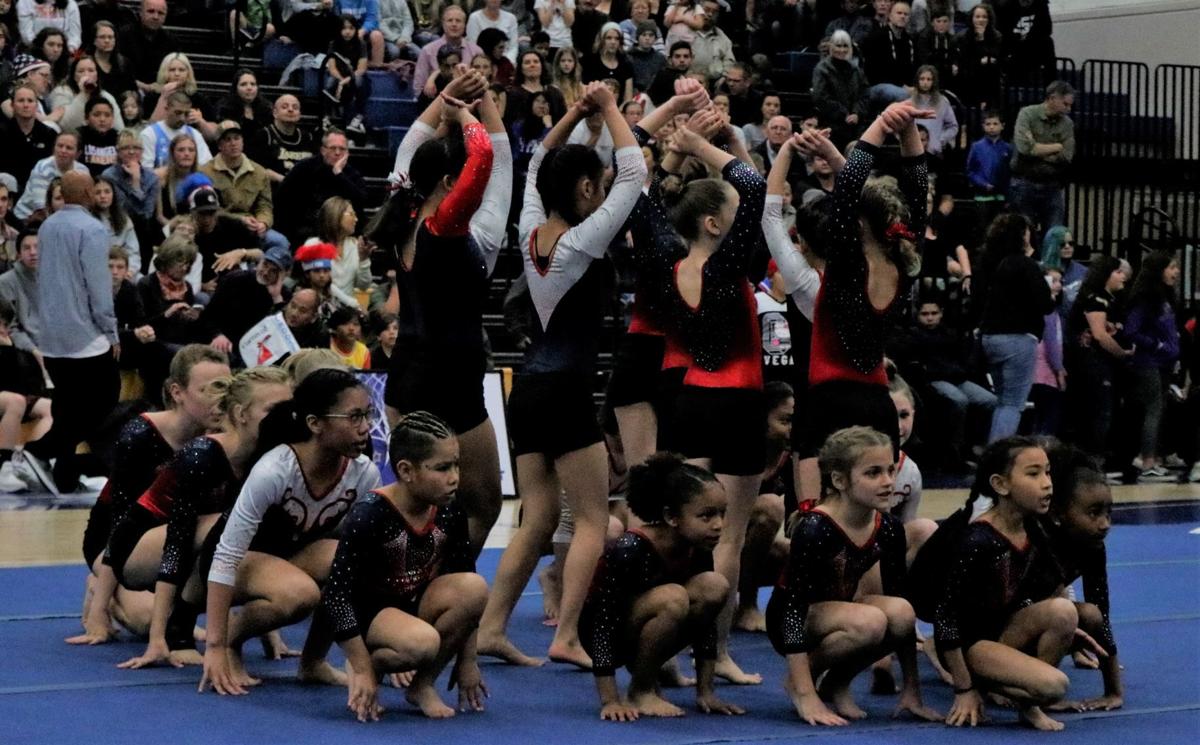 Photos: KT's All-Star perform at halftime of the Harlem Globetrotters' game at AHC

During the Magic Pass session, the Globetrotters autographed basketballs, had a children’s layup line and taught the children tricks like spinning a basketball on one finger.

“This is my first time seeing them in person but I’ve watched them on TV,” said Jared Reindel, of Nipomo, who along with his wife Kelly, brought three of their four sons. They got to Joe White Gym early and grabbed seats on the bottom row right at mid-court.

“We’ve got the three younger ones, Connor, 14, who played on the St. Joseph freshman team this year, Sam, 12, and Matthew, 7. The younger boys play Sixth Man club basketball at St. Patrick’s School."

“I’ve watched them on TV before but my younger brothers don’t know what to expect,” said Connor Reindel.

“We’ll see if they get the bucket in the face,” said Jared Reindel of the Globetrotters’ famous trick where they throw a bucket of water at the ref, he ducks and a fan gets it — and it turns out to be a bucket of confetti.

“I only saw them on TV when I was a little girl,” said Kelly Reindel. “I’m expecting a magical night.”

“I saw them 100 years ago in Fresno. They were awesome,” said Santa Marian John Glines. “I’m shocked that they’re here in Santa Maria. That just tells you how cool Hancock is.”

“But he’s only 50,” said Glines’ father Jim, the Chairman of the Board of the Community Bank of Santa Maria.

“I’ve seen them on TV, They’re good,” said Sekai Mitchell, a player on the Cabrillo High freshman team. “I like all the tricky stuff they do. I can’t wait to see them in person.”

“It’s our family night out,” said Patrick Mallon, the Strategic Marketing Director for Illinois Tool Works in San Luis Obispo. “We brought 60 people from ITW with their family and friends.

“This is my third time seeing the Globetrotters live. I saw them at the Wildwood Convention (on the southern New Jersey shore), and I took my kids to see them at Channel Islands High School in Oxnard. I wanted to bring everyone because I know how much fun it is.”

Photos: KT's All-Star perform at halftime of the Harlem Globetrotters' game at AHC

And then it was time for the Main Event.

As advertised, the Globetrotters put on a display of spectacular ball handling, tricks, dunks and trick shots including their unique 4-point shot from just inside the half court line.

The Globetrotters regularly stopped the action to involve the crowd, including inserting one local youngster into their lineup, grabbing a rebound and then feeding him the ball for a layup.

They added a young girl to the lineup and stopped the game while they taught her how to spin two balls on her fingers, one on each hand.

At one point, the Globetrotters threw the ball to the referee.

When the ref, who was wearing a microphone, asked why, Hi-Lite Bruton, the on-court master of hijinks, replied, “Because you were open.”

The comedic banter between the two continued throughout the game.

At one point, to the delight of the crowd, Hot Shot Swanson, the world’s shortest professional basketball player, jumped on the back of the Generals’ center to try to stop a shot.

Then center went up and dunked the ball. Hot Shot was called for a foul which led to another long comic routine between Hi-Lite and the referee.

At halftime, a group of local girls took over center court.

"It was so exciting," said Katey Eckenrode, KT's head coach. "I am so proud of the girls. They were fabulous, perfect."

"I think it was a pretty cool opportunity," said Chloe Smith, 13, one of KT's All-Stars. "The best thing was being able to perform in front of this large crowd. And the Globetrotters are really talented. I've never seen anything like this."

"It was lots of fun," said another All-Star Riley Slider, 13. "And this is a really cool event to perform at."

After the final buzzer, the Globetrotters stayed on court for the “5th Quarter,” where they signed autographs until the crowd dwindled down.

The Globetrotters are now off to San Diego as the White Team continues its West Coast swing.

And for those who would like to see another game at Hancock, Ensing said, “Anybody here that has a Globetrotters ticket stub can come back and get free admission to our game against Santa Barbara on Saturday at 3 p.m.

Andrew Toles’ sister on his mental health issues: ‘We want to help him so badly’

Last week, Toles was arrested after police found him sleeping behind Key West Airport in South Florida. Baseball fans were shocked by the news as well as the mug shot showing the popular player looking alarmingly unkempt.

Asterisk on the NBA title? Coaches, players say not a chance

To the teams in the NBA, this championship might be the toughest one ever claimed. It’ll come after more than three months of living in a quasi-bubble at the Disney complex near Orlando, Florida, after an entire postseason is played without fans, with most if not all that time spent away from friends and family. And only one of the 22 teams headed to Disney will be able to say it was absolutely worth the trouble.

Bucks, Lakers look to shed rust, be healthy for playoffs

Central Coast Classic: Hancock made playoff run despite only having six players 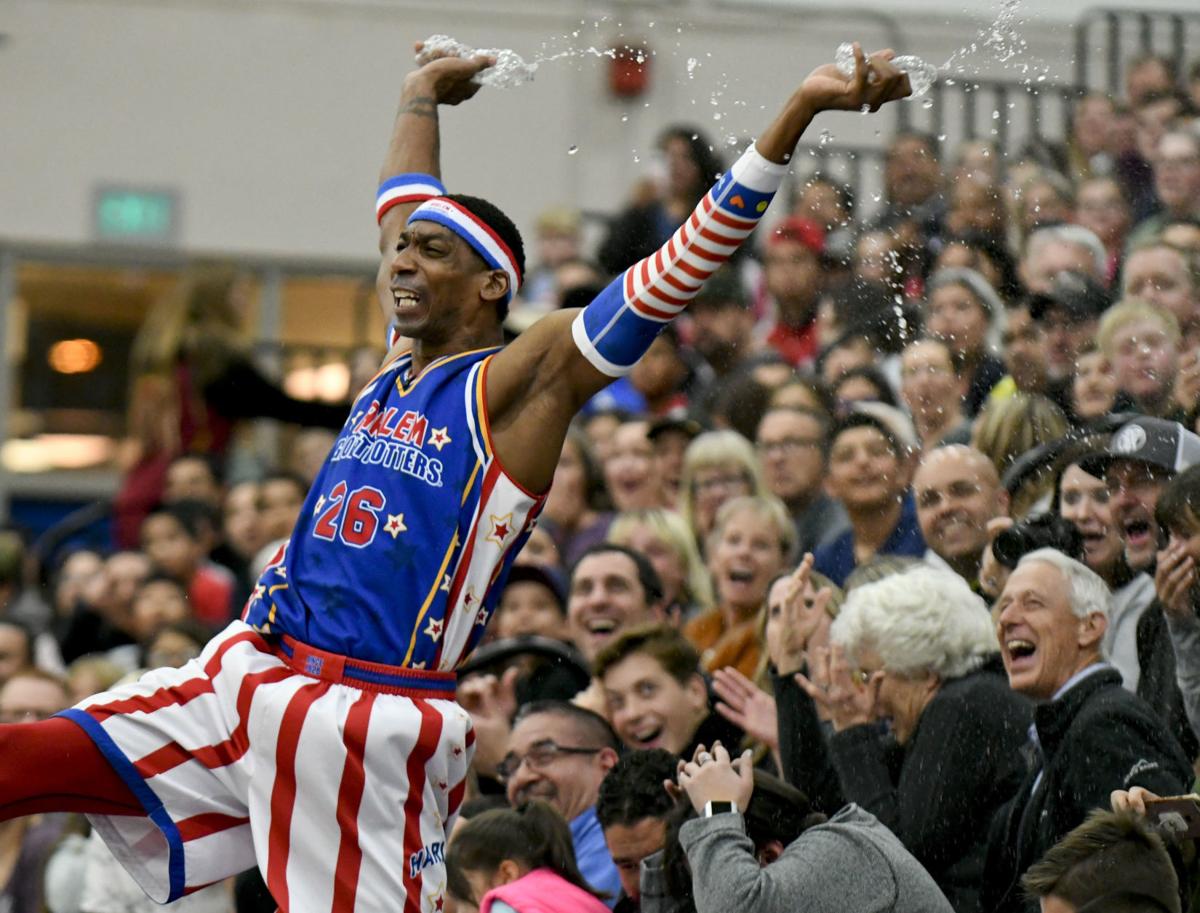 Hi-Lite Bruton of the Harlem Globetrotters wets down the crowd at Hancock College on Thursday night. 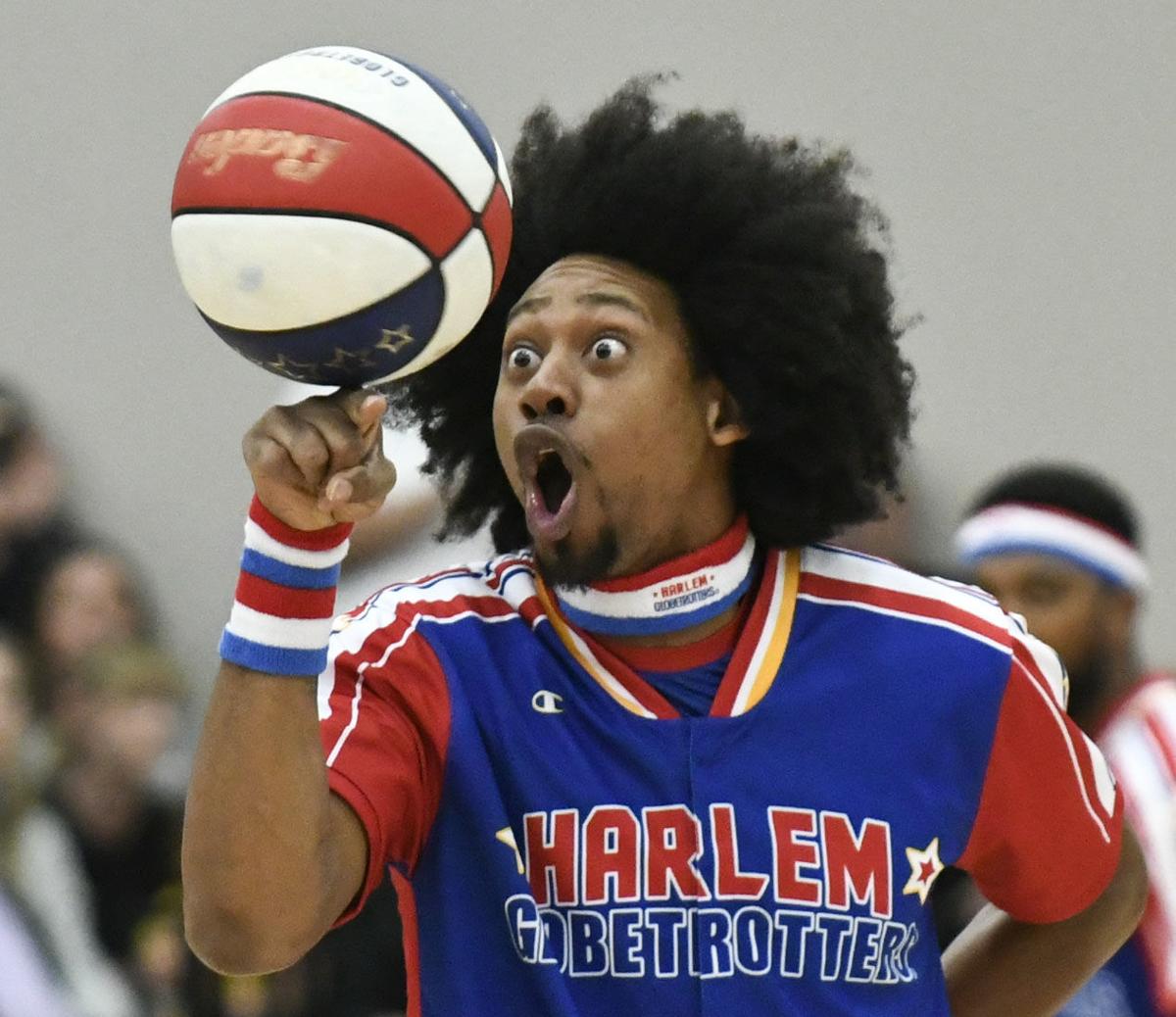 Moose Weeks spins the ball during "Sweet Georgia Brown" and the passing warmup for the Harlem Globetrotters at Hancock College on Thursday night in front of a sold-out gym. 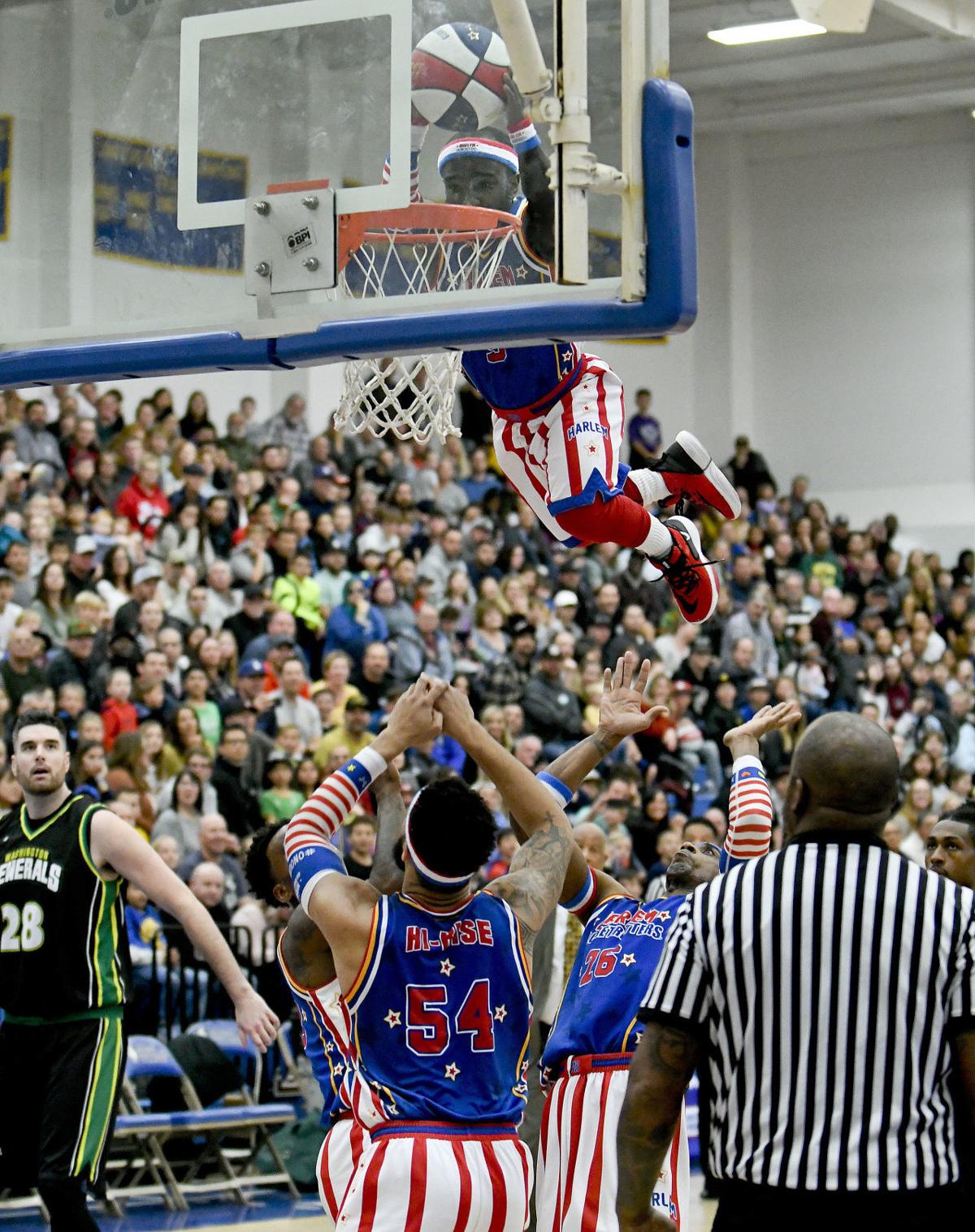 Harlem Globetrotter Hot Shot Swanson, who is 4-foot-5, dunks at Hancock College on Thursday night in front of a sold-out gym. 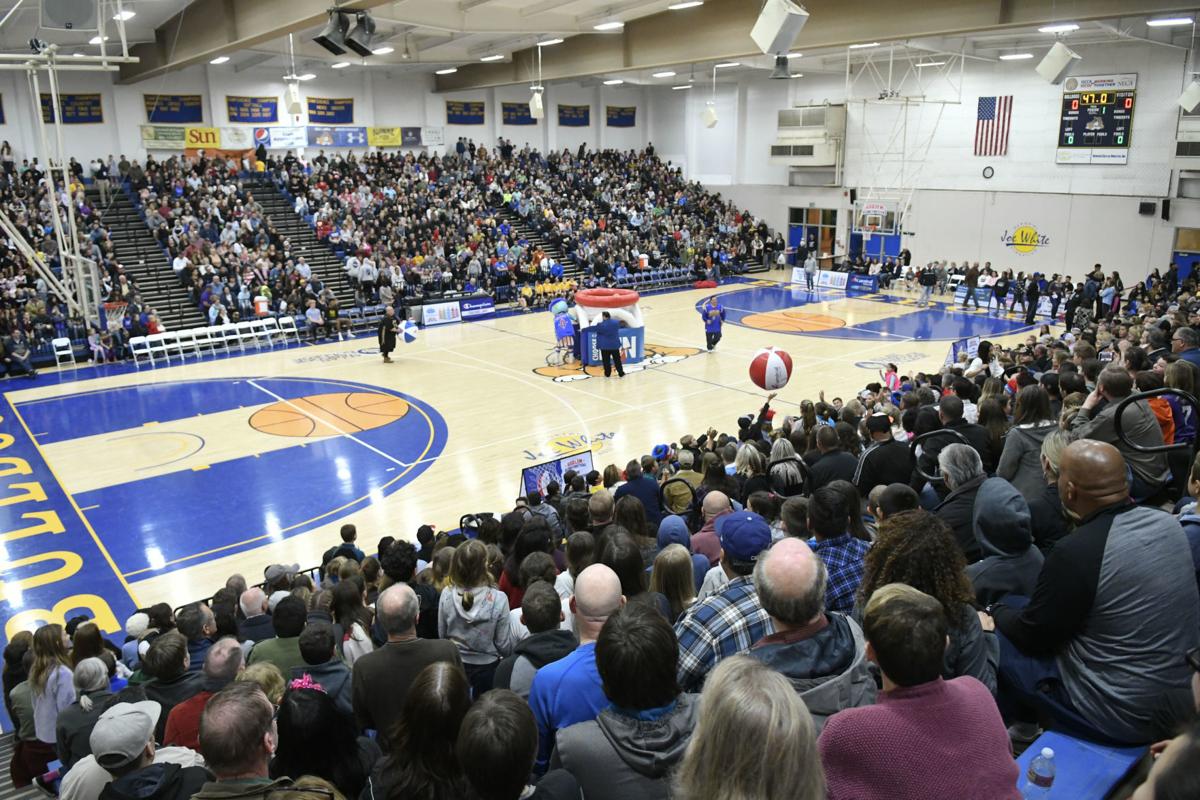 The Harlem Globetrotters perform at Hancock College on Thursday night in front of a sold-out gym.