The death of Kobe Bryant, his 13-year-old daughter Gianna and seven other people in a tragic helicopter crash last Sunday still weighs heavy on the hearts and minds of people on the Central Coast, in Southern California and around the world.

No one can fully capture what impact any one life has on others, and understanding and describing an individual's impact on a global scale is impossible. One of the only ways to see it is by measuring the collective grief and pain that the loss of that person creates.

“I thought he was going to live forever,” Lakers great Magic Johnson told KCBS-TV. “I thought he was invincible. ... There was nobody who took more pride in putting on that Laker uniform than Kobe. Nobody. He was just special. We will miss him and we’ll remember him for his greatness, but let’s not forget how he impacted the world, too.”

Memorials to Bryant at the Staples Center popped up almost immediately and memorials to the other victims of the crash in print and on social media have been numerous and equally heart wrenching.

In this 'From the Vault' we share the front covers featuring some of Kobe Bryant's accomplishments on the hardwood, and some Associated Press photos from his Hall of Fame career.

'The big fella cried, spilling tears that has been welling up inside his massive 7-foot-1, 330-pound body for eight years.

He hugged his family, lifting several of them off the floor, and walked to center court where the championship and MVP trophies awaited and the purple and gold confetti streamed down from the rafters.

This was the moment that had eluded Shaquille O'Neal. Bad free-throw shooter, one-dimensional player, bad actor, a rapper without a ring -- all those titles had dogged him throughout his NBA career.

Like Magic, Wilt and Kareem before him, Shaq and his sidekick Kobe can now be described with just one word: champion.'

No team ever has had a postseason quite like these Los Angeles Lakers, who won their second straight championship with relative ease to complete the best playoff run in NBA history.

Los Angeles defeated the Philadelphia 76ers 108-96 in Game 5 of the NBA Finals on Friday night, leaving the court to boos and taunts from the fans.

With Shaquille O'Neal leading the way, the Lakers finished the playoffs with a record of 15-1, the best ever, and became the first team to go through the playoffs undefeated on the road.

"This time is fun," said O'Neal, the series MVP.

The Lakers won 23 of their final 24 games and were so good that their last pass of the game-- an alley-oop from Rick Fox to O'Neal - dropped unexpectedly for a 3-pointer.'

Shaq and Kobe too much for Nets

'Proficiently and professionally, the Los Angeles Lakers finished off the New Jersey Nets to win their third straight NBA title with a franchise first - a 4-0 sweep in the finals.

Shaquille O'Neal had another dominant night with 34 points and 10 rebounds and Kobe Bryant went back to a supporting role with 25 points in the 113-107 victory Wednesday.

The rest of the Lakers also came through to end the best NBA season for a Nets team that defied all expectations - except against Los Angeles.

It was the Lakers' 14th title, five while the team was in Minneapolis - including a three-peat - and nine in Los Angeles. This, however, was the first time the Lakers beat an opponent four straight games in the finals.'

'Kobe Bryant kept shooting, from all over the court and from every angle.

By halftime, he had 26 points - not a bad tally for most players. By the end of the game, he put up the second-highest total in NBA history.

The Los Angeles Lakers star scored a staggering 81 points Sunday night against the Toronto Raptors in a 122-104 win. Only Wilt Chamberlain's 100-point game stands ahead of him.

"It just happened," Bryant said. "It's tough to explain. It's just one of those things."

"It really hasn't set in," he said. "To sit here and say I grasp what happened tonight, I'd be lying."

'Kobe Bryant has the NBA Title he needed most; the one without Shaq.

Bryant's seven-year chase of a coveted championship is over. He's got his fourth, and Los Angeles coach Phil Jackson his record 10th, a ring for each finger. One year after failing in the finals, Bryant and the Lakers have redemption and all the rewards that go with it.

They earned their 15th title on Sunday night as Bryant scored 30 points and Pau Gasol added 14 and 15 rebounds in a 99-86 win in Game 5 over the Orlando Magic, who ran out of comebacks.

It took longer than Bryant expected, but he has stepped out of former teammate Shaquille O'Neal's shadow at last. His forth championship secured, a strong case can be made for Bryant being the league's best player since Michael Jordan hung up his sneakers.

O'Neal, now with the Phoenix Suns, was glad to see Bryant win another title.

Congratulations kobe, u deserve it, O'Neal said on Twitter. You played great. Enjoy it my man enjoy it.'

Lakers Win It All

'Purple and gold confetti raining down upon him, Kobe Bryant hopped up on the scorer's table, shook his fists and extended five fingers.

When he hopped down, Boston's legendary Hall of Fame center Bill Russell was waiting to shake his hand.

A Game 7 classic - and this time, it finally went the Lakers way.

Bryant, the finals MVP, scored 23 points despite 6-of-24 shooting, and the Lakers won their 16th NBA championship Thursday night, dramatically rallying from a fourth-quarter deficit to beat the Celtics 83-79 in Game 7 of the NBA Finals.

Bryant earned his fifth title with the Lakers, who repeated as NBA champions for the first time since winning three straight from 2000-02. Coach Phil Jackson added his 11th, matching Russell's total and possibly putting a cap on his remarkable career if he decides to leave the Lakers.

"This one is by far the sweetest, because it's them," Bryant said after the Lakers beat Boston for the first time in a Game 7. "This was the hardest one by far. I wanted it so bad, and sometimes when you want it so bad, it slips away from you. My guys picked me up."'

In final night of career, Bryant drops 60 in win over Jazz

He scored 60 points in his final NBA game Wednesday night, wrapping up 20 years in the NBA with an unbelievable offensive showcase in the Los Angeles Lakers 101-96 victory over the Utah Jazz.

Bryant scored 23 points in the fourth quarter, posting his first 50-point game since February 2009 and rallying the Lakers from a 15-point deficit to win the final game of the worst season in franchise history.

With the entire Staples Center crowd standing, Bryant drained a 3-pointer with 59 seconds left. He hit another with 31 seconds to play, putting the Lakers ahead 97-96. He finished with an assist before checking out for good with 4.1 seconds left in just the Lakers' 17th win of the worst season in franchise history.

Bryant took a career high 50 shots to get there. He posted his fifth highest-scoring game of his career, and he became the oldest player to score 50 points in an NBA game.

Italian town where Bryant played as a kid mourns — again

Billie Eilish, a voice of the youth, tops the Grammy Awards

Was Kobe Bryant's pilot feeling pressure to fly that day?

A public memorial service for Kobe Bryant, his daughter and seven others killed in a helicopter crash is planned for Feb. 24 at Staples Center, a person with knowledge of the details told The Associated Press on Thursday.

FILE - In this July 26, 2018 file photo former Los Angeles Laker Kobe Bryant and his daughter Gianna watch during the U.S. national championships swimming meet in Irvine, Calif. Bryant, the 18-time NBA All-Star who won five championships and became one of the greatest basketball players of his generation during a 20-year career with the Los Angeles Lakers, died in a helicopter crash Sunday, Jan. 26, 2020. Gianna also died in the crash. She was 13. (AP Photo/Chris Carlson) 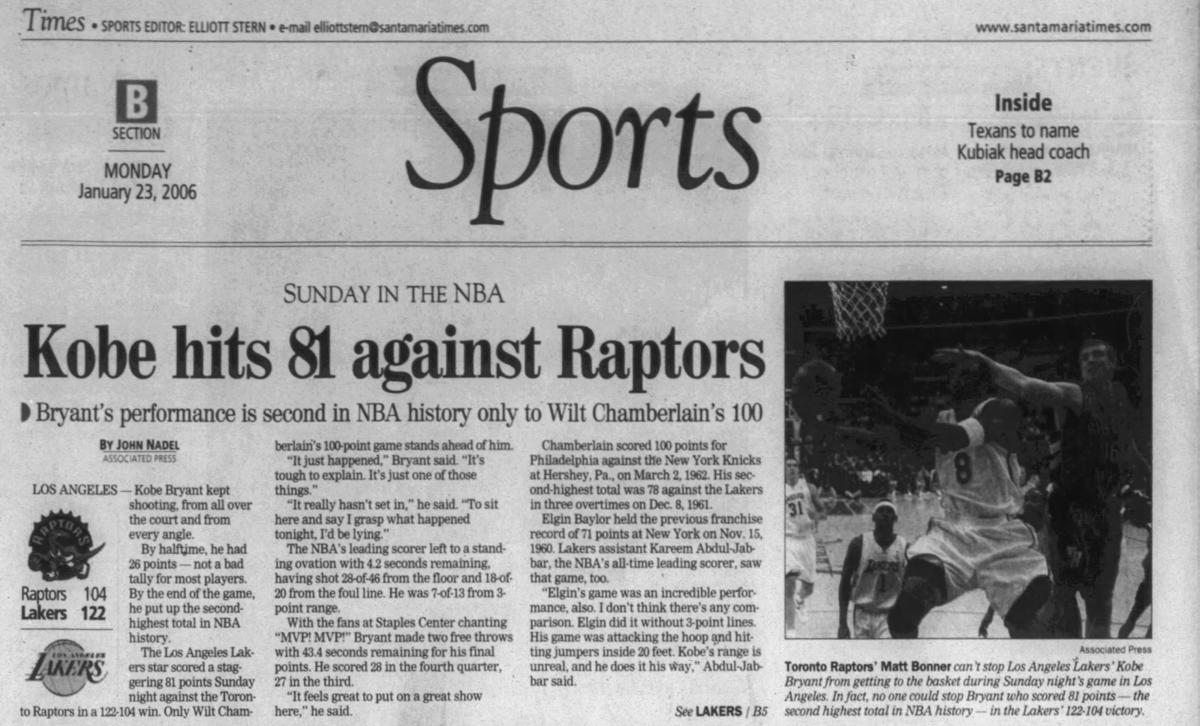 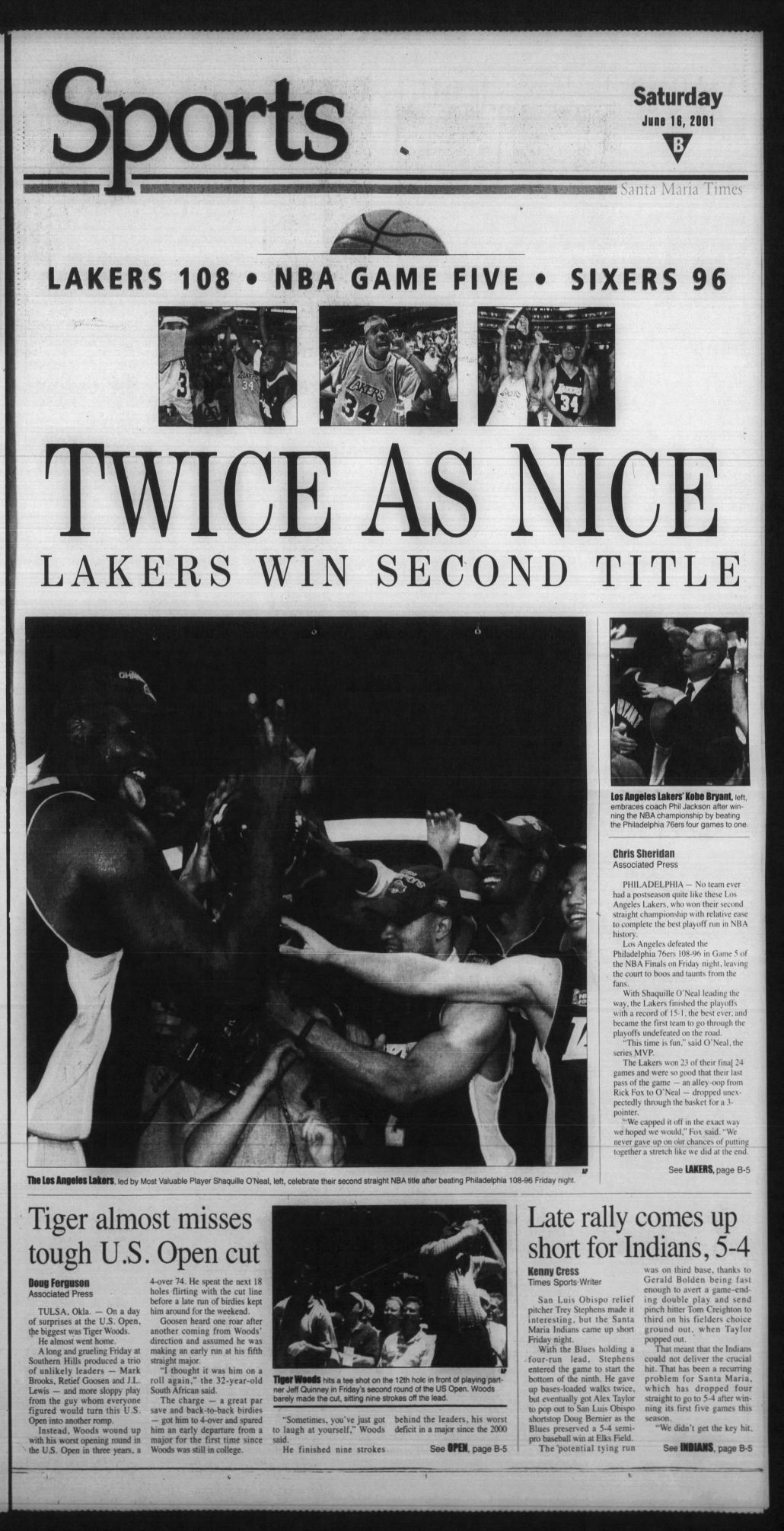 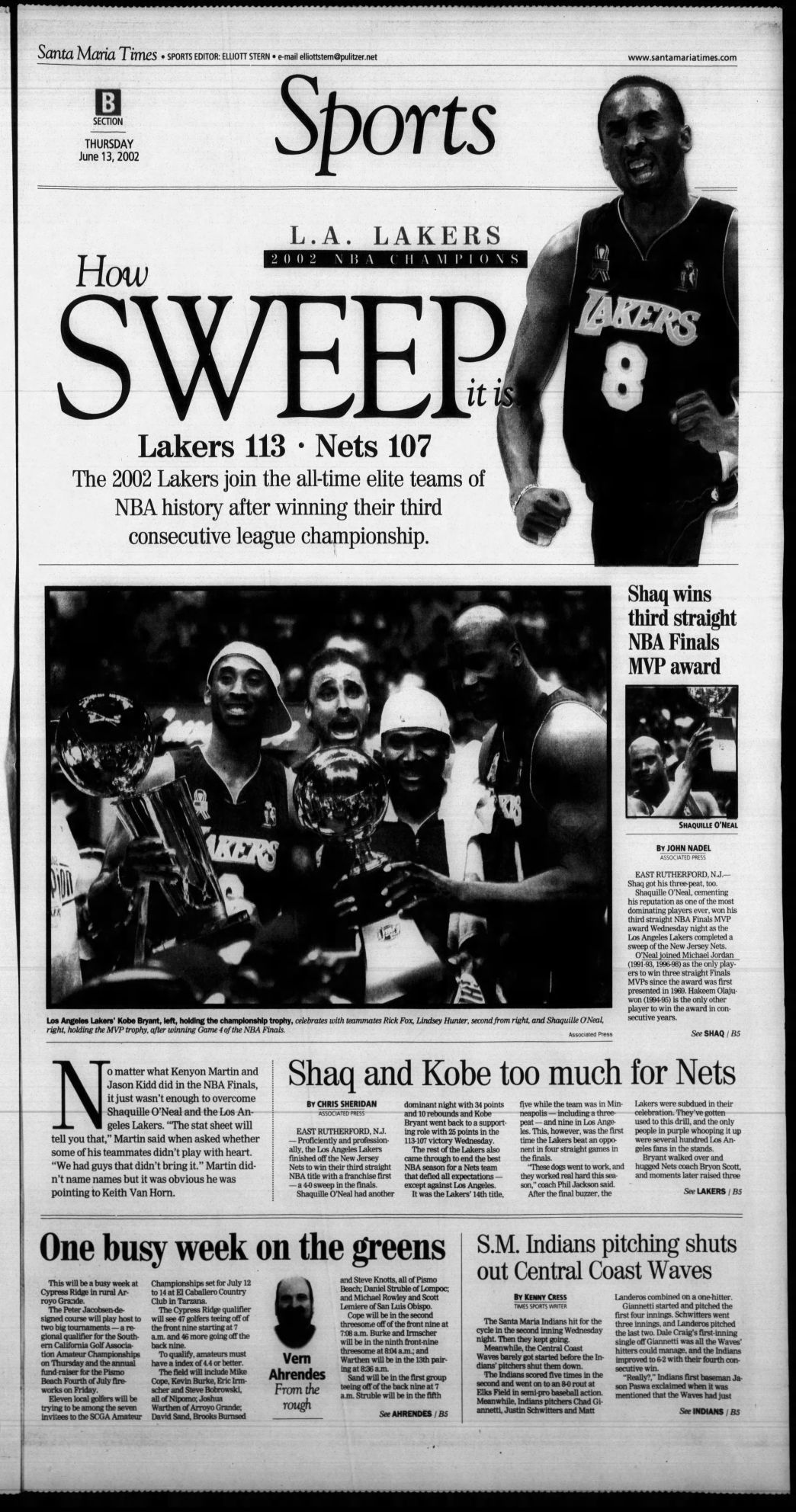 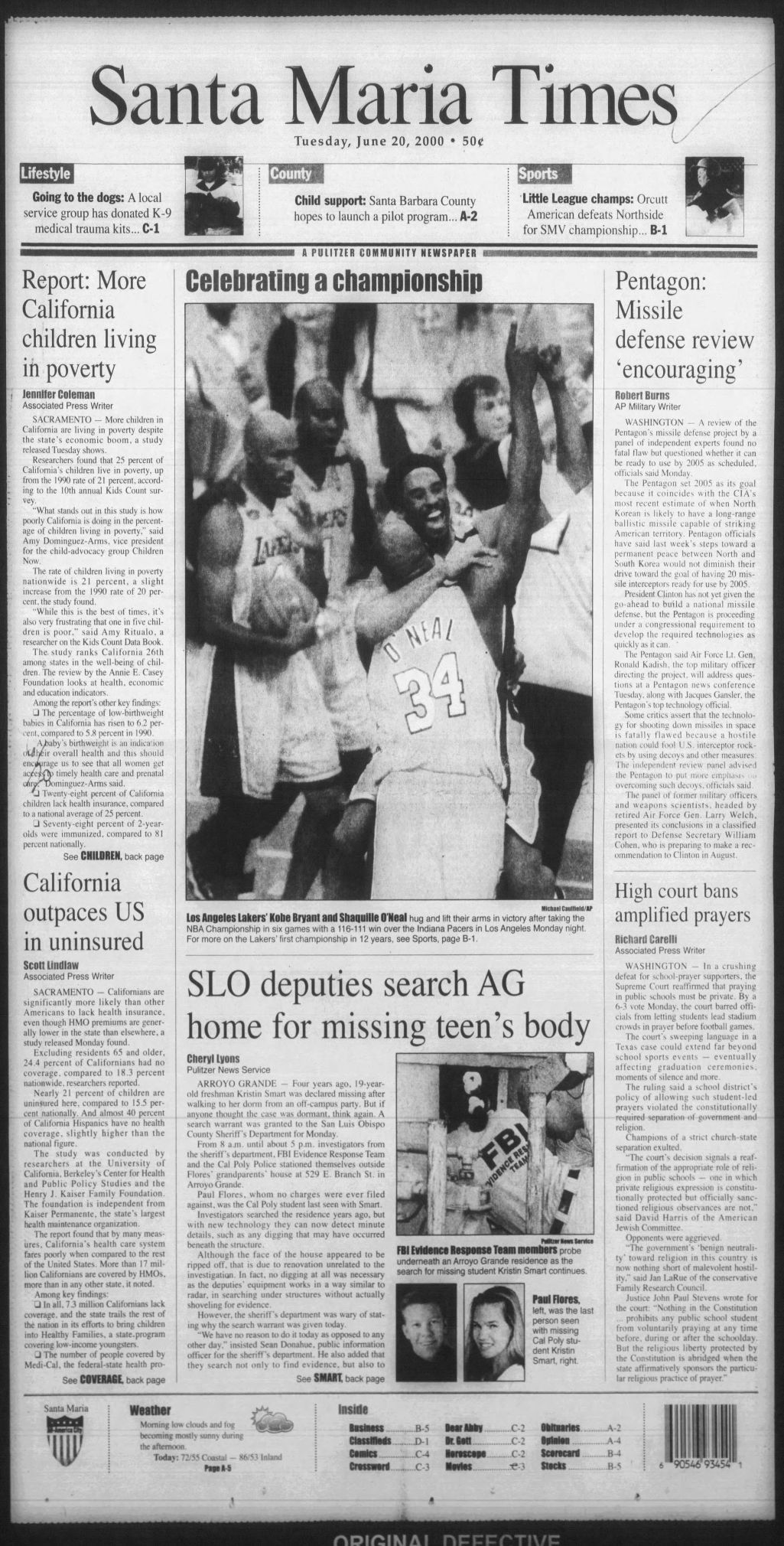