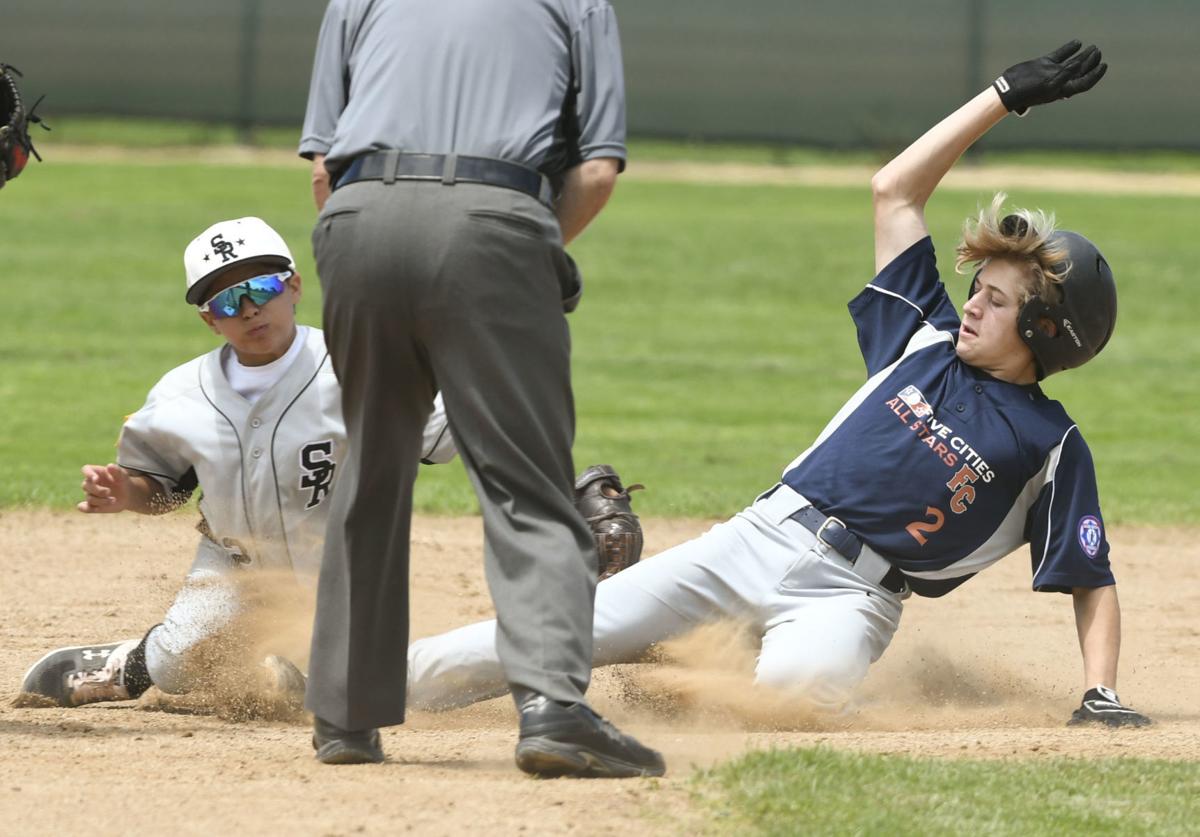 Ty Scrudato, of Five Cities, tries to steal second base against Reno's Gavin Hansen during the Babe Ruth 14-year-old Pacific Southwest tournament at the Soto Sports Complex in Arroyo Grande. Five Cities was eliminated from the tournament by Lodi on Thursday. 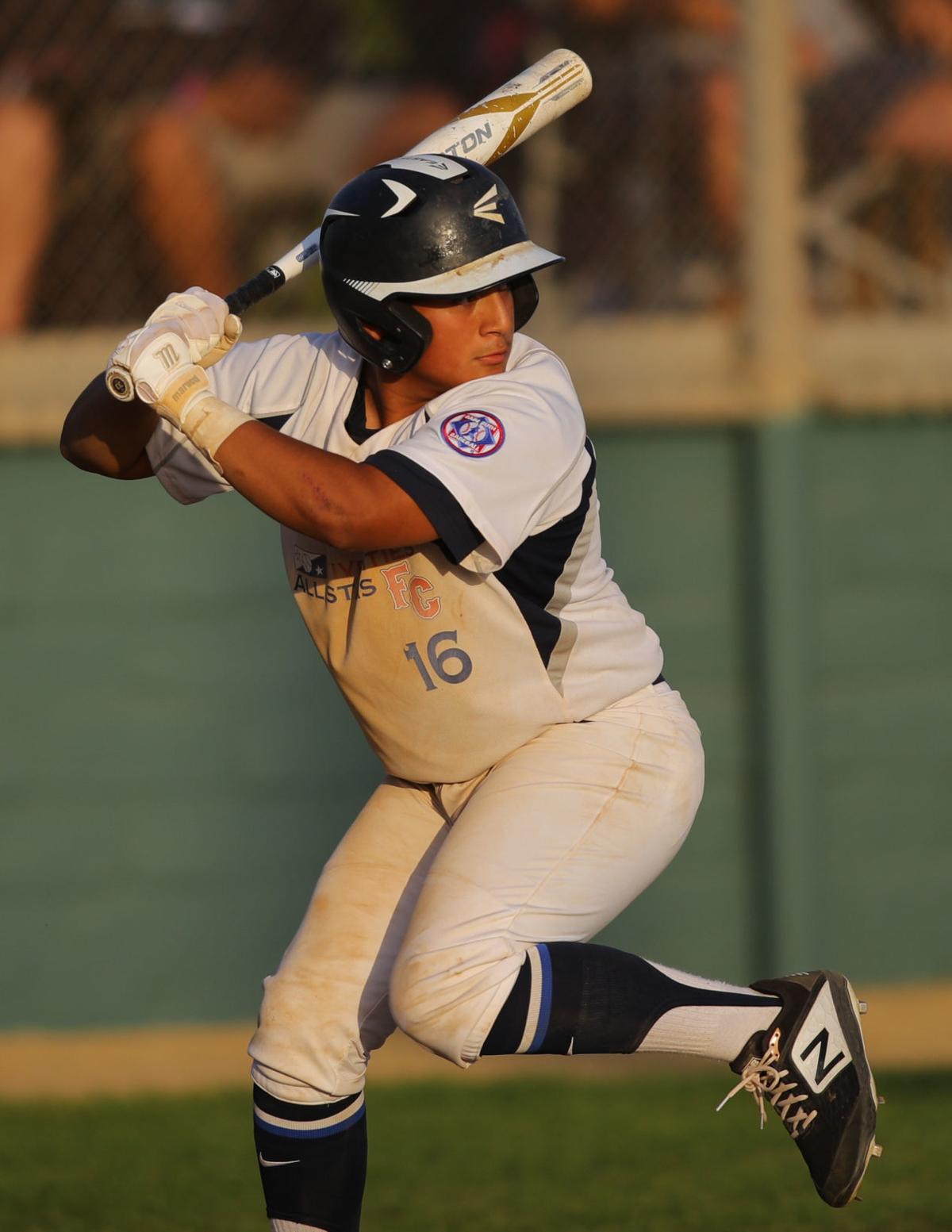 Lodi, the team the Five Cities 14U All-Stars beat by double digits to win the 2019 Central California State Tournament, has put the 2018 13U Babe Ruth World Series champions out of the 2019 14U Pacific Southwest Regional.

Lodi scored two unearned runs in the first inning Thursday, and that was it for the scoring as Lodi stunned the host team 2-0 in an elimination game on Porter Field at the Soto Sports Complex in Arroyo Grande.

"This was pretty much the same Lodi team we'd played before," said Five Cities manager Michael Afzali. "We'd played them four times before and won pretty handily all four times."

Five Cities' regional tourney ended with a second straight 2-0 loss. Iolani, the Hawaiian representative, finished the host squad's unbeaten 2019 run with a 2-0 win Wednesday night. Five Cities had been 18-0 for the year going into that one.

The host squad's favorable past history against Lodi did not come close to repeating itself Thursday. Instead, Five Cities pitchers walked nine batters, Lodi capitalized on the only error of the game and Five Cities didn't solve Lodi starter Gianni Casazza until it was just about too late.

"They scored those two unearned runs in the first, and that was all she wrote," said Afzali.

"We couldn't get nothing going until late."

Dylan Bartlett led off for the designated home team by drawing a five-pitch walk in the first, Auston Schmierer followed with a bunt that Five Cities starter Josiah Cabreros couldn't field, and Bartlett and Schmierer both wound up scoring.

The same thing happened to Five Cities Thursday that happened the night before. Neither run against the host squad scored on a base hit. Bartlett scored on a double play and Schmierer raced home on a wild pitch.

Meanwhile, Casazza, dealing balls that moved around a lot in the lower strike zone, consistently got the best of the Five Cities hitters.

The first two Five Cities batters of the game reached base on an error and a single. A strike-out-throw-out double play, with lead runner Ty Scrudato being thrown out trying to get to third on strike three, muzzled that threat.

Southwest Pacific Regional: Iolani, all the way from Hawaii, hands Five Cities its first loss of the summer

Five Cities did not get much going against Casazza again until Mikey Afzali and Marc Byrum hit consecutive two-out singles in the fourth. Casazza got the third out on a fly out to left.

The host team mounted a last threat in the top of the seventh. James Bishop drew a walk on a 3-2 pitch with two outs, loading the bases and putting Casazza past his 95-pitch limit.

It took reliever Brayden Stout, the starting third baseman, two pitches to get a ground ball to third for a force play at second to end it.

Byrum, the starting shortstop, kept Five Cities in it after relieving Cabreros with two outs in the first. He denied Lodi three times with runners in scoring position until yielding to starting third baseman Kaden Tynes in the fifth.

Tynes and Matt Rodriguez, the fourth and last Five Cities pitcher, blanked Lodi but, as was the case Wednesday night, Five Cities could not get a key hit. The host squad stranded five runners in scoring position.

A couple of big calls in the sixth went against the hosts. The Lodi first baseman had to leap off the bag to field the throw from third, but the first base umpire called Scrudato out on a close play.

Later it appeared Tynes clearly stole second base, but the second base umpire called Tynes out for the third out. Michael Afzali argued both calls, to no avail.

"The umpires make the calls. We have no control over that," said the Five Cities manager.

Afterward, the Five Cities players were recognized in a brief ceremony,

"We'll try it again with these guys next year as 15-year-olds before they go on to the rest of their lives," said Michael Afzali.

Ty Scrudato, of Five Cities, tries to steal second base against Reno's Gavin Hansen during the Babe Ruth 14-year-old Pacific Southwest tournament at the Soto Sports Complex in Arroyo Grande. Five Cities was eliminated from the tournament by Lodi on Thursday. 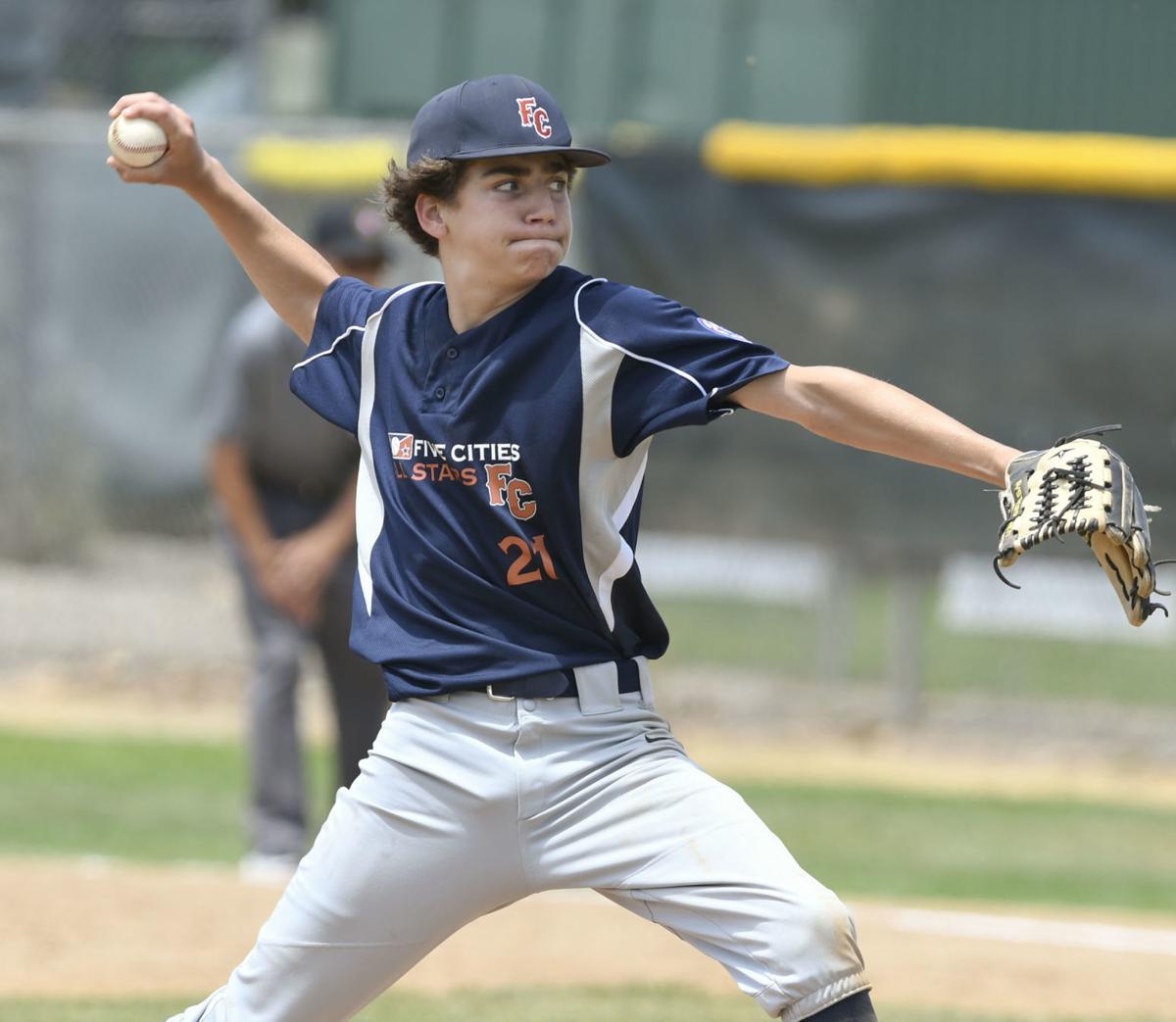 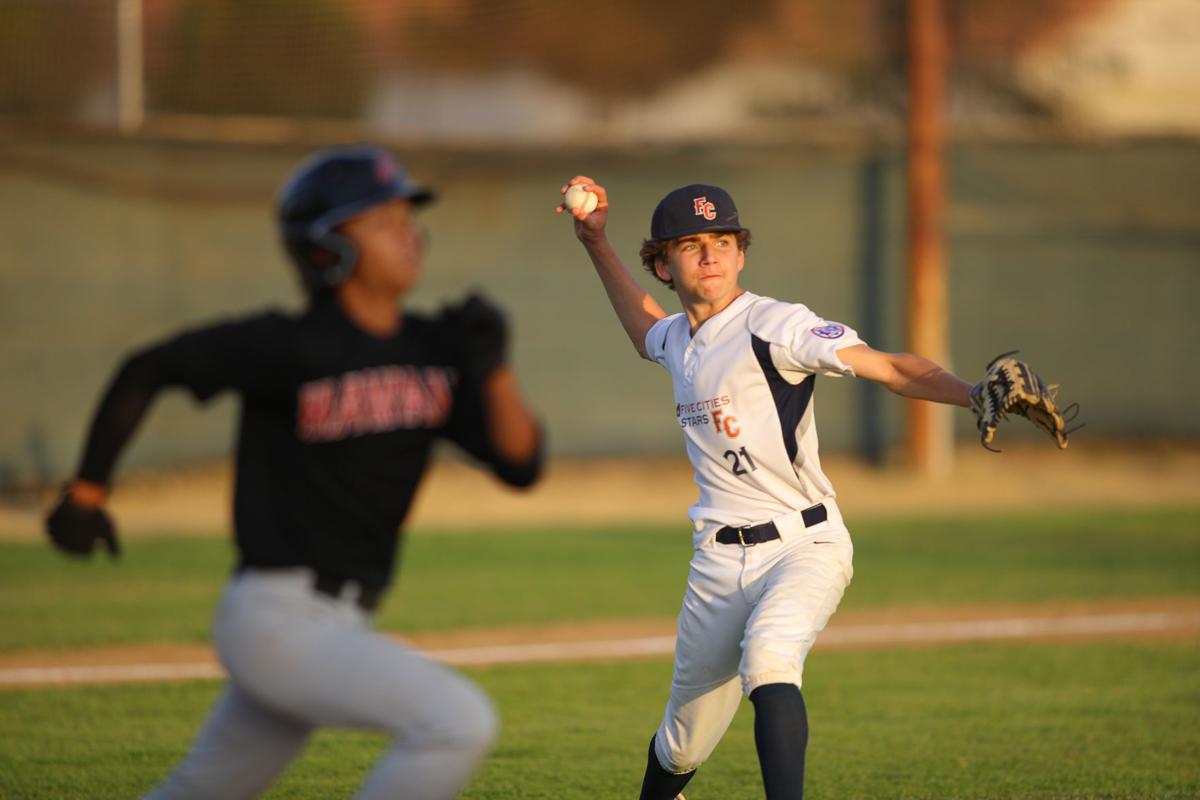 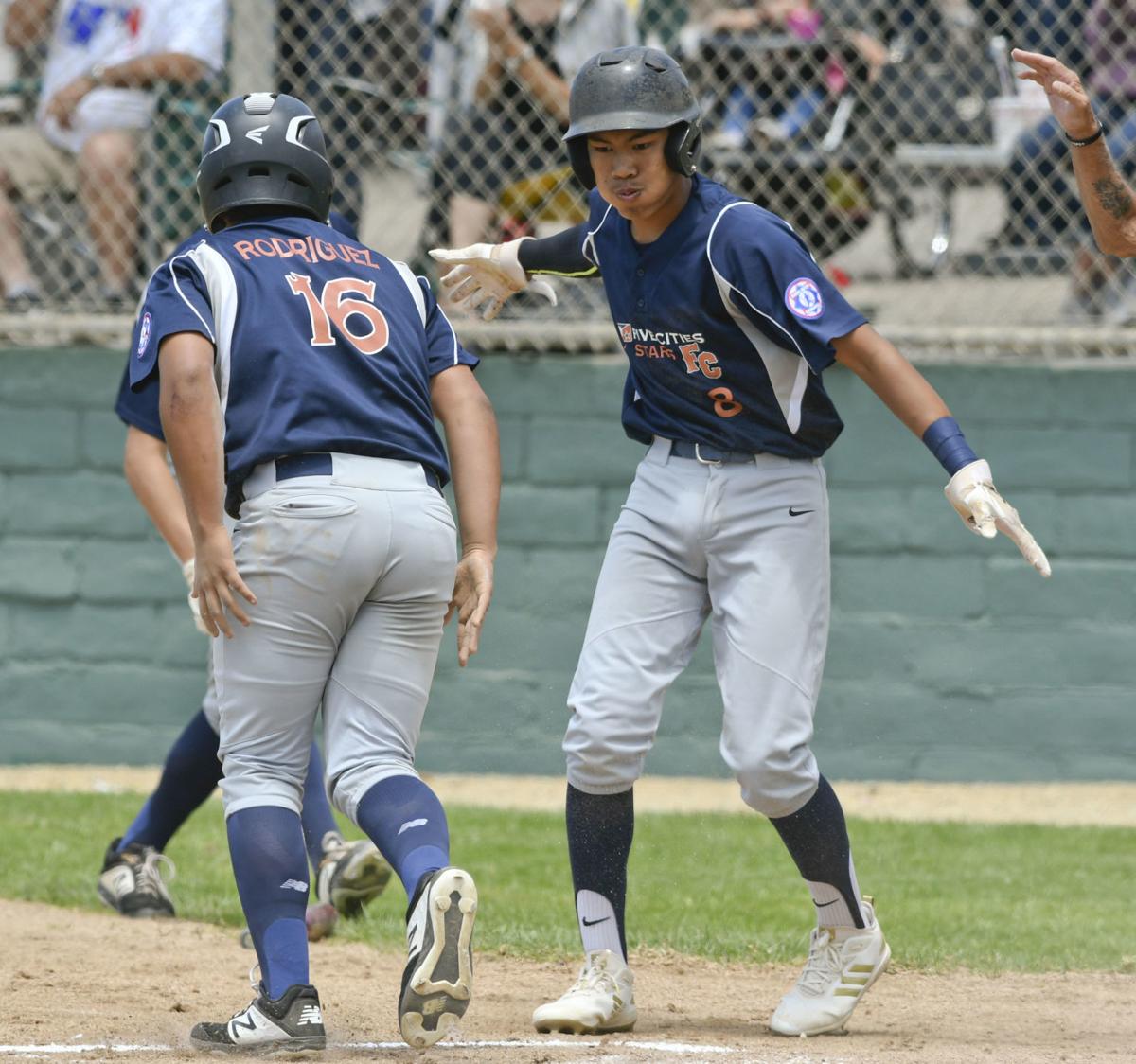 Five Cities' Matt Rodriguez is welcomed home by Josiah Cabreros after they both scored against Reno during the Babe Ruth 14-year-old Pacific Southwest tournament, on Tuesday at the Soto Sports Complex in Arroyo Grande. 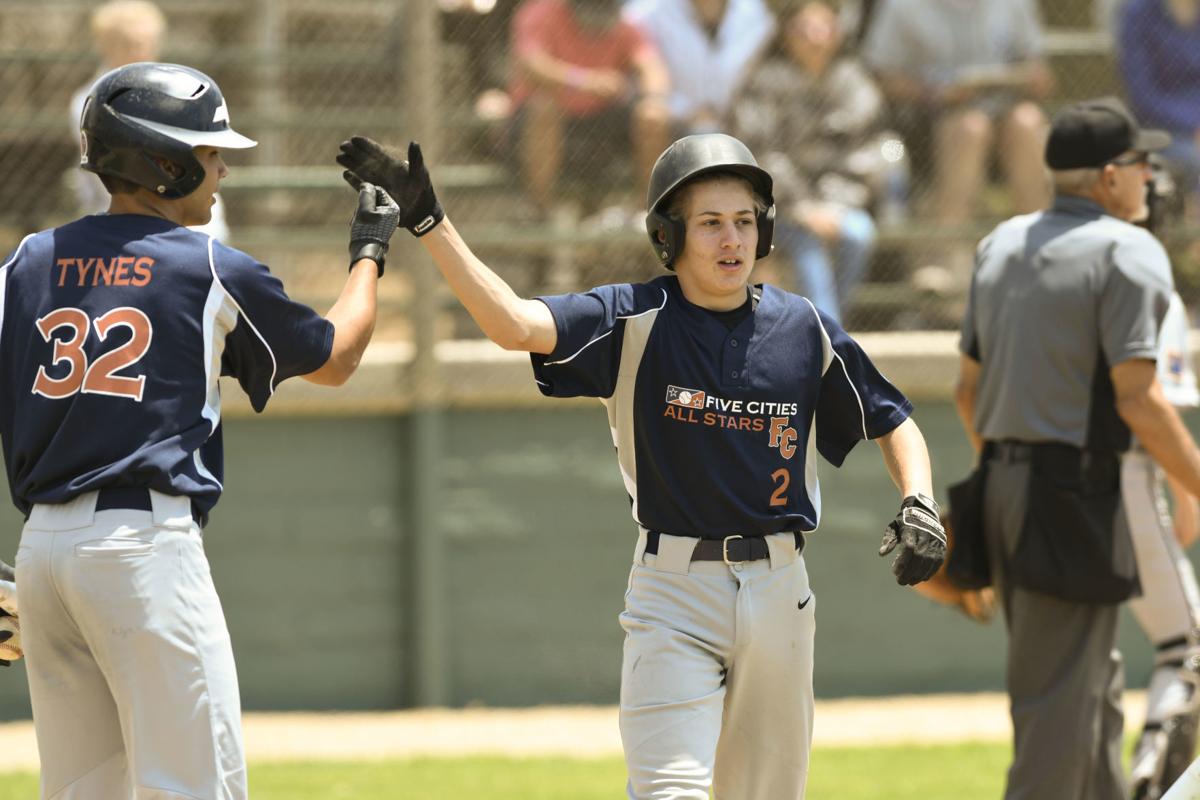 Five Cities' Kaden Tynes congratulates Ty Scrudato for a run, against Reno during the Babe Ruth 14-year-old Pacific Southwest tournament, on Tuesday at the Soto Sports Complex in Arroyo Grande.