Jim Kunkle is grand marshal of the Solvang Independence Day parade. He was a highly decorated WW II fighter pilot. He still keeps planes at the Santa Ynez Airport, including a Champ A7A, left, a Cessna 320, right, and a 3/4 scale 1929 travelair 400 biplane, background. 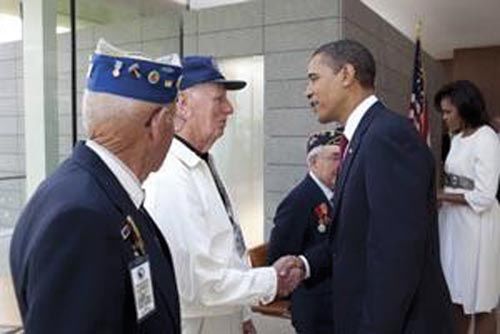 Solvang resident Jim Kunkle, second from left, meets President Barack Obama in 2009 during a ceremony in France commemorating the 65th anniversary of the D-Day invasion. 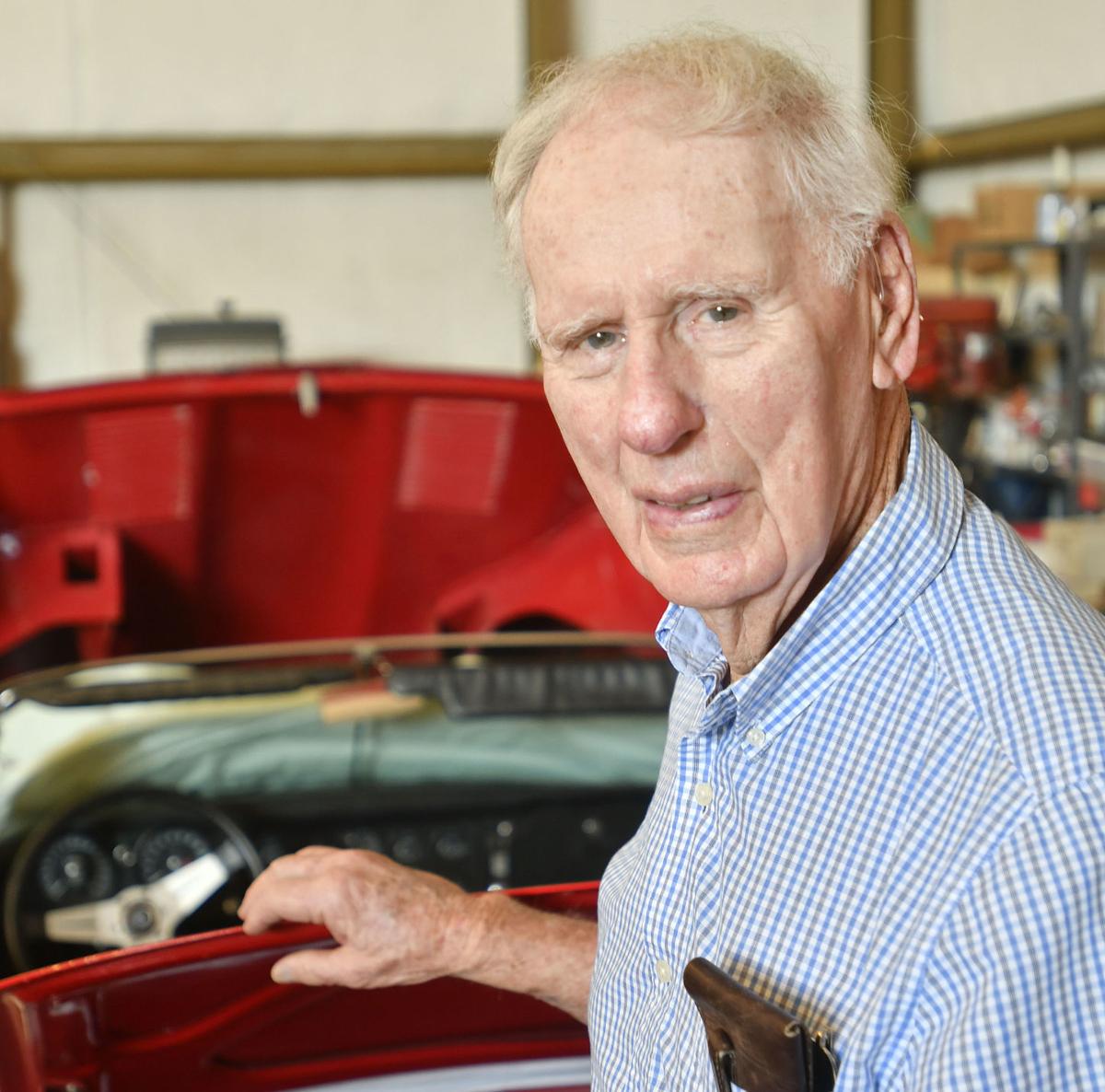 Jim Kunkle is grand marshal of the Solvang Independence Day parade. He is restoring a 1970 Jaquar XKE. 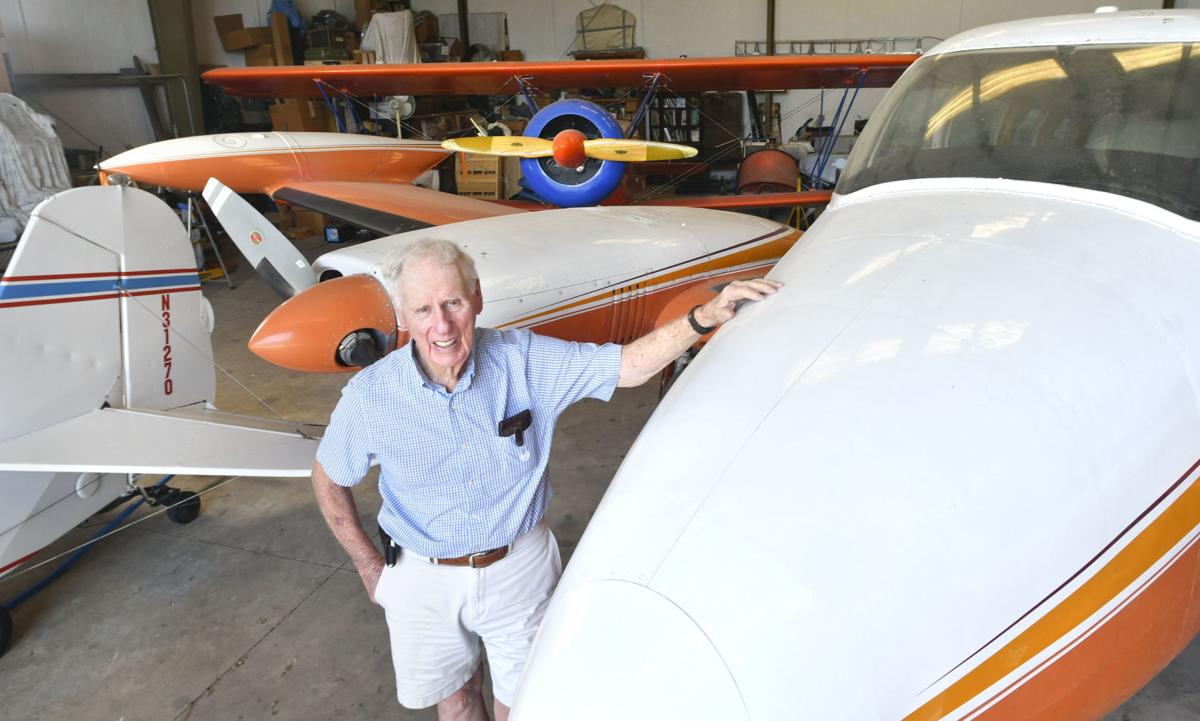 Sitting at his desk in an office above the hangars at the Santa Ynez Airport, Jim Kunkle is surrounded by memories of his renowned World War II service.

Kunkle, 94, is a highly decorated hero from that conflict. He is a member of the Legion of Valor of the United States of America. The Air Medal of Honor, Distinguished Service Cross, Croix de Guerre and Purple Heart are among his many awards.

Yes despite the numerous accolades — including those delivered personally by President Barack Obama in 2009 — Kunkle still considers being named grand marshal for the Solvang Independence Day Parade a great honor. Perhaps more importantly, he calls it his "civic duty."

"I remember when I was a little tiny kid, all the flags you put on your car radiator for Independence Day. It was a big day, a very patriotic day. I've always enjoyed it over the years," he said.

Kunkle has ridden in the parade several times, in a group known as the Flat Fender Friends, so called because they ride in military Jeeps from the flat-fender era.

Next week will mark his first time as the parade grand marshal, and he's chosen to still ride in one of the flat-fender jeeps as opposed to the more traditional convertible sedan.

He'll be accompanied by his wife, Ruth, and grandchildren and will be wearing his Army Air Force "50 missions" cap for the event.

Fifty missions caps came about, Kunkle explained, when the Army removed the grommet that kept it standing upright from their pilot's caps so they could crush them down and have their headset over it.

"The caps looked pretty beat up, as if you'd worn them through 50 missions, because of the headset being over it," Kunkle explained.  "Mine probably still has some Omaha Beach dirt on it."

It just might. Over Kunkle's desk is a painting of his Lockheed P-38 fighter flying over the English Channel. It was painted by the late English artist, Doug Chapman.

"You can see the White Cliffs of Dover," Kunkle pointed out.

Across the room he has a control wheel from a P-38 on display. There are also photographs of the airfield the Allied forces built at Normandy Beach, with construction starting the day after the D-Day invasion.

Kunkle had flown 36 missions when he was shot down and forced to parachute from his plane, but only after having downed five German fighter planes.

He still flies and maintains six aircraft in three hangars at the Santa Ynez Airport.

"We have a twin Cessna, a 320. We have two Super Cubs, and two 185 Cessnas, one with a set of floats. We have a little 85 horsepower Champ that we fly around the Valley. We have a little open cockpit biplane. I only fly that when it's warmer. It's colder than heck in the cockpit in the winter," Kunkle said with a chuckle.

His grandson and son also fly. Jim Kunkle Jr. spent 14 years on the Santa Ynez Airport Authority. He currently has a fixed base operation (FBO) at the Santa Maria Airport.

With his two rescue dogs, Lindy (for Charles Lindbergh) and Gracie, by his side, Kunkle "walks the runway," a mile and a half, nearly every day to maintain his health and the same lean physique he had when as a 22-year-old 2nd lieutenant he piloted his P-38 over the D-Day invasion troops and later took part in operations in Belgium and Germany.

"Probably 30 percent of our missions were over [General George] Patton's 3rd Army," he recalled. Another 30 percent were in support of the 1st Army.

Kunkle marvels that it's been 75 years since the United States entered World War II. He remembers as a child knowing the last Civil War veterans, men who were then the same age he is now. His great-great-grandfather was a Yankee soldier.

"With the parade coming, they were looking for a World War II veteran and there just aren't that many of us still around," he said, acknowledging the toll the years have taken.

That said, Kunkle is ready to enjoy the experience, waving to the crowds and celebrating the birth of a nation he fought so valiantly to defend.

"The Solvang parade is a patriotic kick," Kunkle said with a broad smile.

From May 25 to 27, Santa Ynez Valley will gather in observance of Memorial Day weekend in a series of events and ceremonies that pay tribute to the 1.4 million service men and women who died in some 60 military actions over a 229-year span.

From the Vault: France honors local WWII hero Jim Kunkle with Legion of Honor medal in 2009

Written by Pat Murphy and published in the Santa Ynez Valley News on Thursday, July 9, 2009:

Jim Kunkle is grand marshal of the Solvang Independence Day parade. He was a highly decorated WW II fighter pilot. He still keeps planes at the Santa Ynez Airport, including a Champ A7A, left, a Cessna 320, right, and a 3/4 scale 1929 travelair 400 biplane, background.

Solvang resident Jim Kunkle, second from left, meets President Barack Obama in 2009 during a ceremony in France commemorating the 65th anniversary of the D-Day invasion.

Jim Kunkle is grand marshal of the Solvang Independence Day parade. He is restoring a 1970 Jaquar XKE.