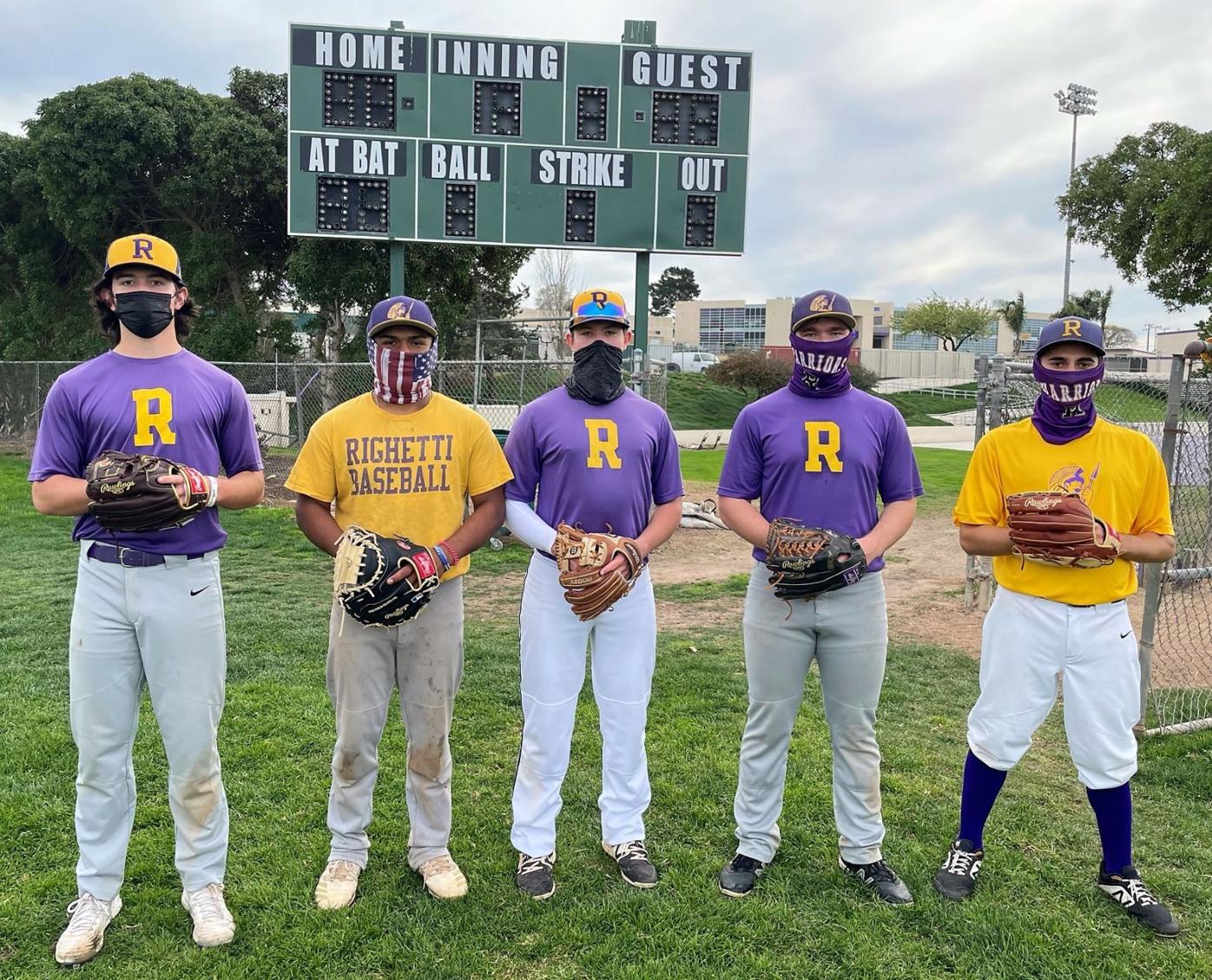 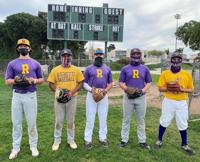 The Righetti baseball team will be led by a group of captains that includes, from left, Cooper Bagby, Andrew Gonzalez, Gavin Long, Quigley Espinola and Max Frantz. Gonzalez, Espinola and Frantz are the only seniors on the squad in 2021. 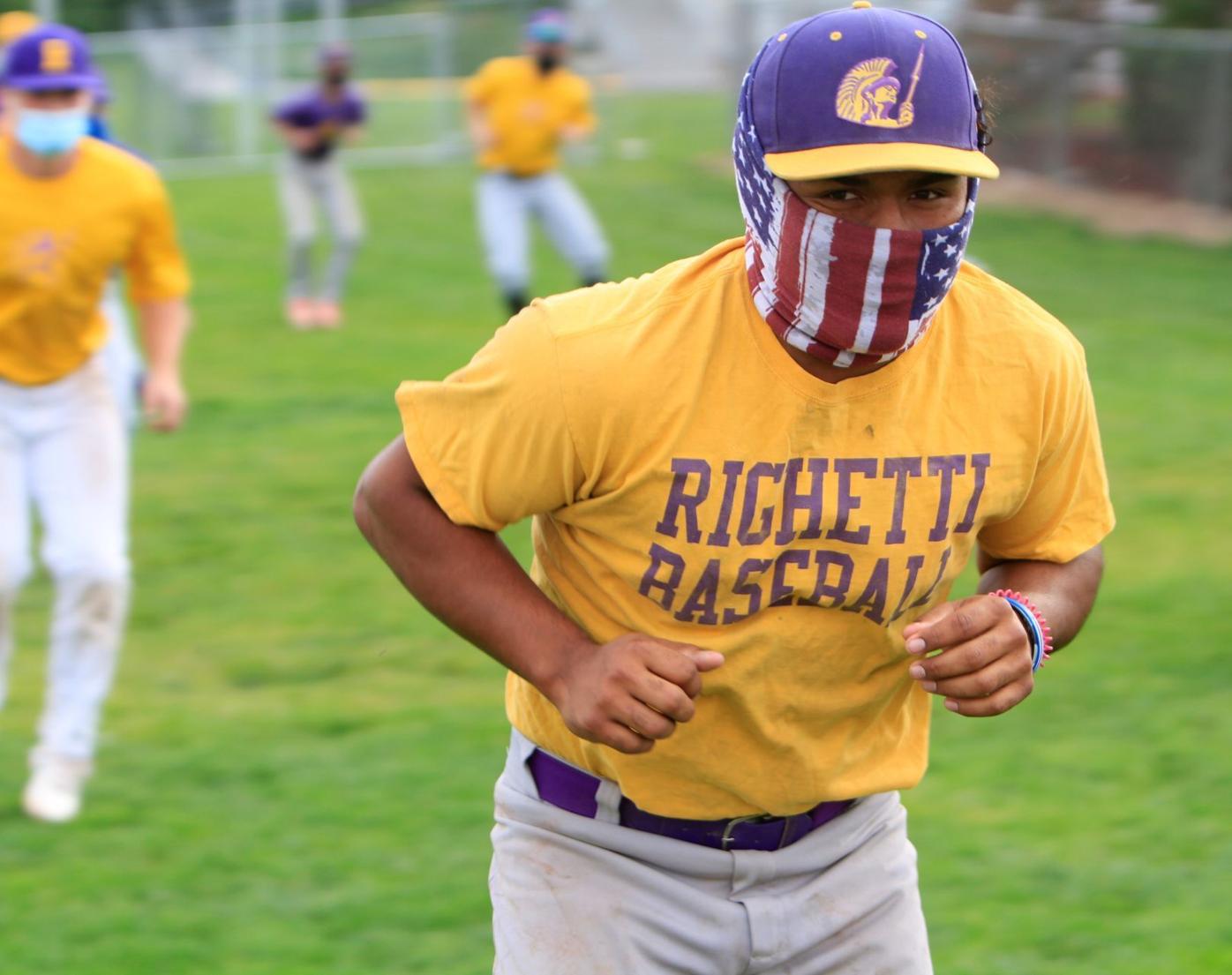 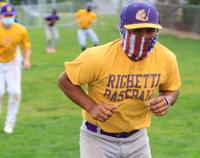 Righetti senior catcher Andrew Gonzalez leads the team in a warmup during a recent practice. 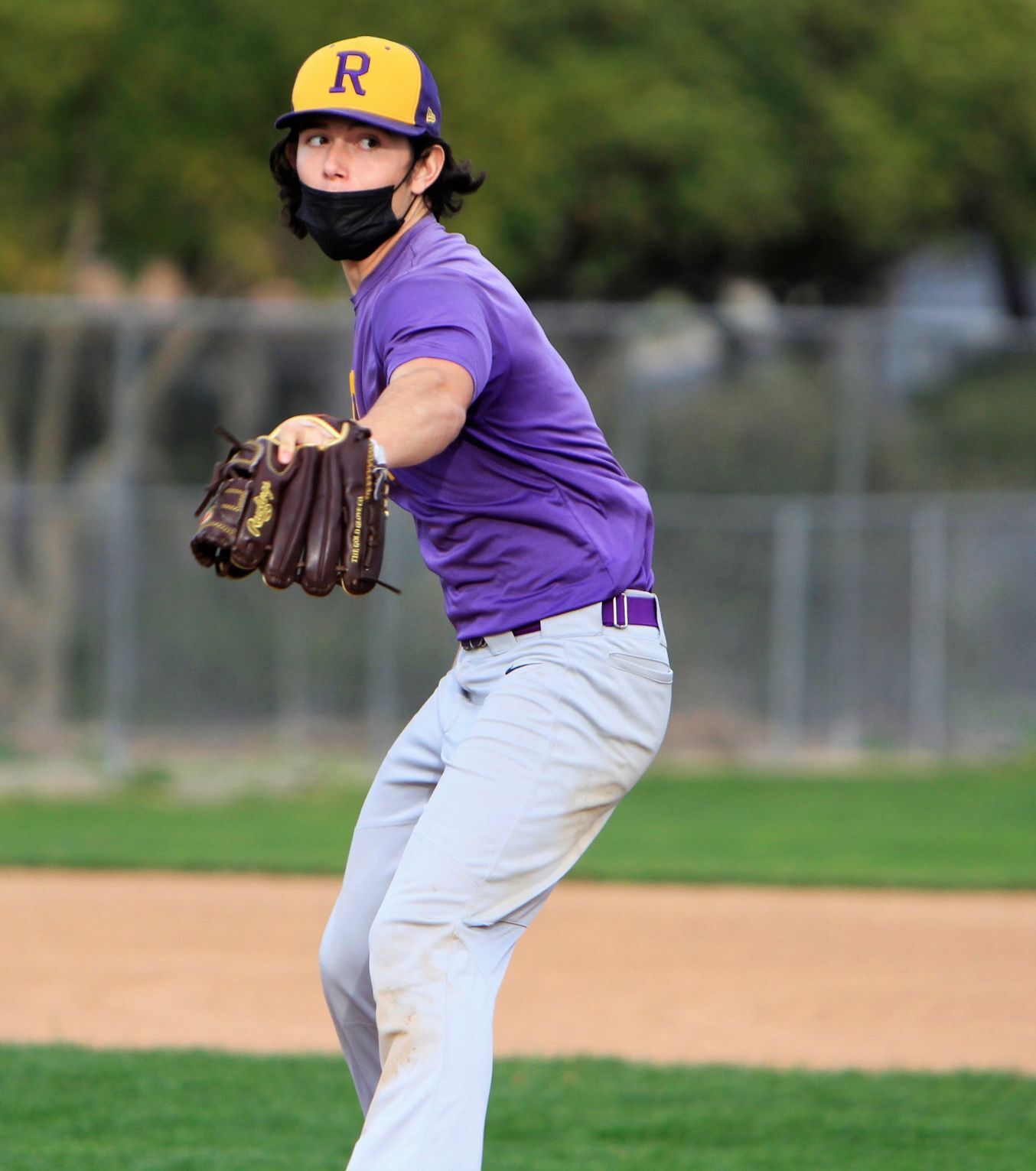 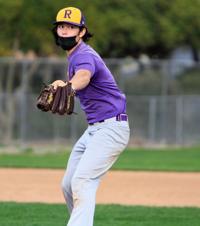 Righetti junior pitcher Cooper Bagby works on a pick-off drill at practice. Bagby is expected to lead the Warrior rotation in 2021. 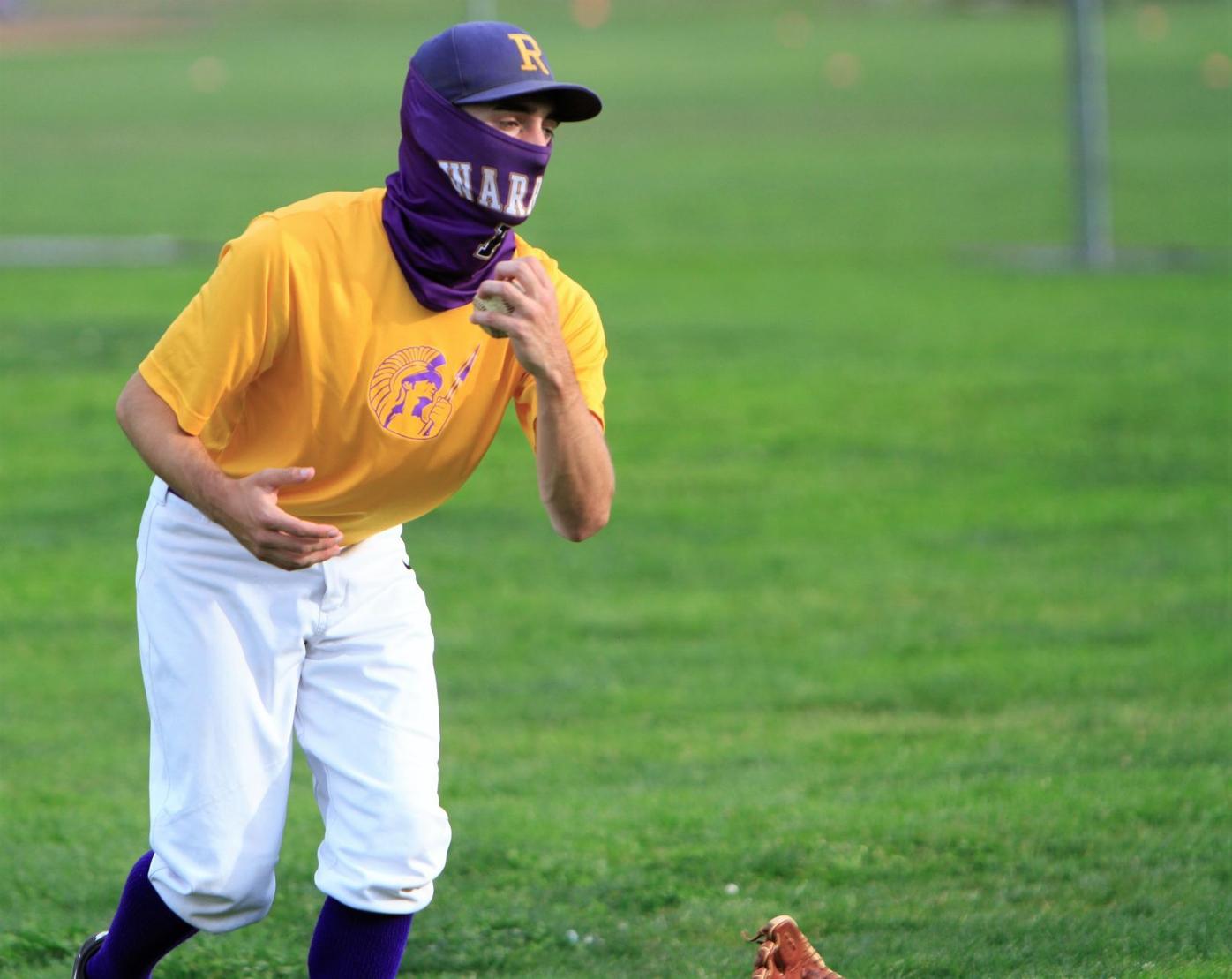 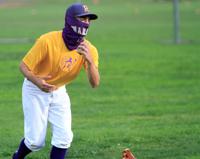 The Righetti baseball team will be led by a group of captains that includes, from left, Cooper Bagby, Andrew Gonzalez, Gavin Long, Quigley Espinola and Max Frantz. Gonzalez, Espinola and Frantz are the only seniors on the squad in 2021.

Righetti senior catcher Andrew Gonzalez leads the team in a warmup during a recent practice.

Righetti junior pitcher Cooper Bagby works on a pick-off drill at practice. Bagby is expected to lead the Warrior rotation in 2021.

After losing most of its 2020 season due to the coronavirus pandemic, the Righetti baseball team is preparing to play again after a nearly yearlong layoff.

That's right, the Warriors are back and they're hungry to play some ball.

The team looks drastically different from the 2020 version that saw nine seniors graduate after having their final seasons taken away by the pandemic.

The team is even more different from the 2019 version that won a Mountain League title and made the CIF Central Section Division 1 semifinals in coach Kyle Tognazzini's first full season at the helm of the program.

"It's been a whirlwind of emotions the last year, trying to figure everything out and trying to get answers," Tognazzini said. "The only thing we could do was to focus on controlling the things that we are able to.

Tognazzini says the Warriors should start their season March 20 against San Marcos and the schedules are still being finalized, but he anticipates that all Mountain League teams will play non-league games against all the Ocean League teams. Mountain League play will likely consist of three-game series with one game on Wednesdays and doubleheaders on Saturdays.

"That'll start sometime in the middle of April," Tognazzini said. "But things could change with the added wrinkle of football."

Tognazzini said many programs will have a similar makeup this year, with participation numbers a little off and more inexperienced players due to nearly all of the 2020 season being washed out due to the pandemic.

The Warriors do have a solid core with the three seniors joined by juniors Cooper Bagby and Gavin Long. Bagby will almost certainly be Righetti's top pitcher.

Long figures to play at either middle infield spots. Espinola had a stellar sophomore campaign in 2019, batting .409 with 27 hits, 13 RBIs, 14 runs, seven doubles, a triple and a homer. He hit .444 with eight hits in six games last year. He scored eight times and drove in five runs.

Espinola has all the tools to be the top lead-off hitter in the area, though he can hit anywhere in the lineup.

"Quigs had a really good sophomore year," Tognazzini said. "We've got our catcher, Andrew Gonzalez, who's been a good player for us behind the plate; he's a rock. Cooper is another guy that has experience. He's a good pitcher for us and he can play a little bit of outfield.

"We're probably in the same boat as a lot of other teams where we're just trying to see what we've got."

Frantz, a senior, is entering his first season on the varsity level. He seconds the notion that Espinola is one of the premier players in the area.

"I've grown up with Quigley and he's always been someone I've looked up to," Frantz said. "I want to be just like him and I don't mean that in a cheesy way. Seriously. He's a five-tool player. He's fast out in the outfield, he's got good speed on the bases and he can hit for power, you name it.

Hungry to be back

Bagby says the team is especially poised to make its return to competition after losing out on so much last year, noting the nine seniors who lost their final year of high school ball.

"We're hungry after not really getting much of a baseball season, things were really starting to flow last year and we all were getting ready and it all just died off," Bagby said. "I think that just makes us hungrier now. We're ready to get after it, win a league title and get a CIF championship."

Gonzalez said the team's mood has changed quickly as it realized it will likely have a season with coronavirus infections rates dropping around the country.

"We all came in thinking that we're not going to have a season because everything wasn't going down and we weren't back in school how we were supposed to be," Gonzalez said. "But now I'm glad to be back with the boys and we're ready to go out with a bang. We're not senior heavy this year like last year when we had the nine seniors. We're just going to have to depend on our young guys to get it done."

Espinola and Long both say this year's squad is a scrappy group that will likely claw out wins.

"I'm hoping to bring a lot of tenacity to the team," Long said. "We're trying to get a good, young group together. We have a lot of guys who haven't played at this level and we need some guys to step up. We've lost all of our seniors from last year, but that's not stopping us from staying hungry."

Espinola, who said how last year ended was "heartbreaking," echoed Long's feelings about the team's abilities.

"I think our strengths are going to be scrappiness," he said. "My sophomore year, we pretty much scrapped together a whole bunch of wins and I think it's going to be the same thing this year. We've got the talent."

Righetti went 22-6 overall and 10-2 in the Mountain League in 2019, edging a loaded San Luis Obispo team to claim the league championship.

Long, Bagby, Gonzalez and Espinola are the only players who were on that 2019 team, with Espinola playing the whole season and the other three combining for about 15 games that year.

1911-2021: Solvang Chamber of Commerce celebrates 100 years with historical look back

Santa Maria Fairpark getting creative to stay afloat amid pandemic