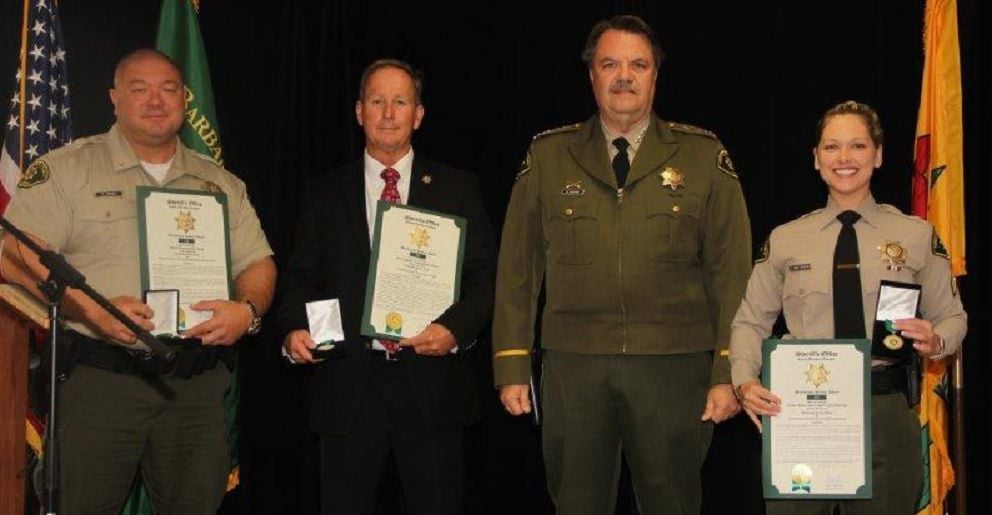 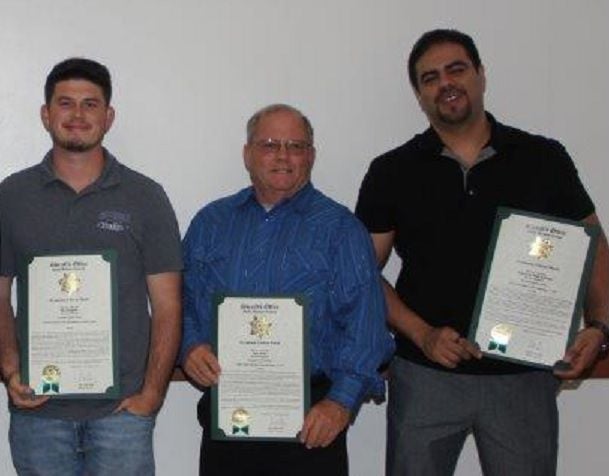 A Santa Ynez resident and the commander of the Santa Ynez Patrol and Lompoc Valley Patrol were among the civilians and Santa Barbara County Sheriff’s Office personnel and honored April 12 at the Recognition Awards Program and Luncheon.

The event to recognize Sheriff’s Office employees and county citizens for their exemplary service during 2018 was held at Earl’s Place at the Earl Warren Showgrounds in Santa Barbara.

An Exceptional Civilian Award was given to Dave Welby of Santa Ynez for rescuing a suicidal woman who had climbed over a railing and was sitting on an overpass in Buellton, a sheriff’s spokeswoman said.

Welby grabbed the woman and pulled her to safety, despite her active resistance, Hoover said, said spokeswoman Kelly Hoover.

He continued to hold onto the woman until he could get to his cell phone and call 911. He then held onto her until help arrived.

A resident of Solvang, Lt. Eddie Hsueh was presented with a Meritorious Service Medal for his work in developing and launching a comprehensive Crisis Intervention Training program for Sheriff’s Office and other Santa Barbara County law enforcement personnel, Hoover said.

Four Medals of Courage were awarded to acting Sgt. Dan Nelson and deputies James Furber, Mark Riggar and Michael McNeil who responded to what ended up being a triple homicide in Orcutt.

After being told by the reporting person there was someone covered in blood inside an Oakhill Estates home, they entered the house and were confronted by a suspect armed with a rifle.

The deputies attempted to de-escalate the dangerous situation by talking to the suspect and trying to get him to surrender peacefully. Their swift and decisive actions led to his containment, Hoover said.

The Special Enforcement Team arrived and took charge of the incident, but after using less-lethal means in an attempt to disarm and apprehend the suspect, he presented a direct threat to deputies and was fatally wounded.

Two deputies were honored for saving a woman’s life in Santa Maria, and four received awards for facing a triple murderer in Orcutt at the San…

Sheriff’s Lifesaving Awards were given to Deputies Shae Green and Jessika Rios for stopping a would-be suicide in Santa Maria.

A distraught woman had tried to hang her herself and was found unconscious and purple in color, Hoover said.

The deputies quickly cut the rope away from her neck and got the woman the medical and mental help she needed.

Rios received a second Lifesaving Award for another incident in which she helped save an elderly man who was choking, taking control of the situation and performing cardiopulmonary resuscitation, which saved the man’s life, Hoover said.

A Medal of Courage was awarded to newly hired Custody Deputy Zachary Salce, and an Exceptional Civilian Award was presented to his girlfriend, Maddison Henslin for their courageous actions on the night of Nov. 13, 2018.

The two Lompoc residents heard the screams of a woman trapped in a neighboring apartment fire and rushed to the scene.

Salce made a couple of attempts to enter the burning building before he kicked open the door.

The two then crawled under heavy smoke and searing heat from the flames to reach the elderly woman and pull her to safety.

Many of the other award recipients were recognized for their response during the December 2017 Thomas fire and subsequent 1/9 Debris Flow in 2018.

In fact, a Major Incident Commendation bar was given to all Sheriff’s Office employees involved in handling the two disasters.

“This is only the second time the Sheriff’s Office has ever awarded a unique enameled commendation bar to all employees involved in a critical incident,” Hoover said. “The other time was following the Isla Vista mass murders in 2014.”

Sheriff Bill Brown said it was important to recognize those who responded to the back-to-back twin disasters.

Why wait for Sunday to hunt for Easter eggs? Hosted by the Solvang Parks and Recreation Department and the Buellton Recreation Center at River View Park, the public is invited to attend the annual Easter Eggstravaganza on Saturday, April 20 at 10 a.m.

“The 1/9 Debris Flow, caused by the Thomas fire, was the greatest natural disaster in the history of Santa Barbara County,” Brown said. “The sustained nature of the rescue and recovery efforts, coming as they did on the heels of the fire, tested our people as never before. The men and women of the Sheriff’s Office rose to the occasion.

“It is fitting that everyone involved in these operations — first responders and those who directly supported them alike — receive special recognition for an extraordinary team effort.”

The Sheriff’s Medal of Valor was presented to six members of the Santa Barbara County Sheriff/Fire Air Support Unit for their heroic actions in responding to the 1/9 Debris Flow.

The six men were the aircrew for two Huey helicopters that flew in extremely hazardous conditions on the morning of the disaster, Hoover said.

They conducted hoist rescues from rooftops and made numerous emergency evacuations of injured and stranded victims, she said.

One of the helicopters had to make an emergency landing as a result of water damage to its radio and electrical equipment.

For all that the Santa Ynez Valley provides, an expansive bucolic lifestyle, prolific vineyards and plenty of room for livestock and horses to roam, it is also home to a less-talked about population of horses that can no longer be ridden for play or sport. Since 2007, Happy Endings Animal Sanctuary in Solvang has become a beacon for animals -- mostly horses -- in need of a place to call home and happily live out the rest of their days.

The Sheriff’s Unit Citation, which recognizes a unit for outstanding service resulting from a team effort, was given to the Sheriff’s Special Enforcement Team.

In addition to its 13 callouts in 2018, the tactical team was recognized in particular for its work in rescuing and evacuating people in the hours and days after the 1/9 Debris Flow when they worked with Sheriff’s Search and Rescue Team members to reach people who were trapped.

A Certificate of Merit Award was given to Patrick Braid, the proprietor of the Village Cheese and Wine Shop in Montecito, for his generosity during a difficult time.

The shop, which was in the Exclusion Zone, became a place of refuge during the Montecito disasters when he opened it up and served free sandwiches to first responders, utility repair personnel and cleanup crews.

The Sheriff’s Medal of Courage was awarded to Sgt. Brian Dickey for his response on July 21,2018 to a suicidal man who was armed with a loaded gun and was threatening to shoot himself in a motorhome at Jalama Beach.Campground.

At one point, the man had the gun pointed at his head.

Dickey built a rapport with the man and convinced him to drop his gun, and the man was detained without incident.

A Distinguished Service Medal was given to former Undersheriff Bernard Melekian for his 40-plus-year career in law enforcement and his guidance and leadership during his time at the Sheriff’s Office.

“He was a mentor to many of our people, and he had a tremendous impact on our agency during his tenure,” Brown said.

Long-time Administrative Office professional Evalee Treen was also awarded a Distinguished Service Medal for her 29 years of service to the Sheriff’s Office, in particular for her work with the Sister Cities Program.

In 2003 she developed a law enforcement exchange program between Santa Barbara and Puerto Vallarta.

“The lives of numerous Mexican police officers have been saved or made safer as a result of the training that has been provided,” Hoover said.

Retired Sheriff’s Lt. Brad McVay was also given a Meritorious Service Award for the work he did to revamp and streamline the sheriff’s contract city agreements and develop the Contract Law Bureau.

“The result is a much-improved, efficient system that benefits the Sheriff’s Office and our four contract cities,” Hoover said.

In 2018, she wrote more than 30 investigative reports and assisted with many others.

“One in particular led to the discovery of an inmate with a cell phone inside an Arizona state prison,” Hoover said. “Her efforts disrupted criminal activity and led to a significant number of seizures of drugs and other contraband.”

Sheriff’s Commendations were given to 11 deputies who helped save the lives of unconscious overdose patients by administering department-issued Naloxone.

The Sheriff’s Office started its Naloxone program in 2017, and since that time the drug has been administered 19 times.

Rusty’s Pizza delivery driver Julio Cesar Silva Rodriguez of Santa Barbara received an Exceptional Civilian Award for helping a UCSB Police Department officer who was engaged in an altercation with a suspect in Isla Vista.

Rodriguez knocked the combative suspect down and pinned him down so he could be detained by responding officers.

“His selfless actions helped prevent injury to the officer and the suspect,” Hoover said.

An Exceptional Civilian Award was also given to given to Alex Knightly for helping apprehend and detain a suspect in Isla Vista who had challenged people to fight and fought with a deputy.

The suspect broke free from the deputy, and Knightly ran after him and blocked him from entering a residence, Hoover said.

He also helped the deputy restrain the violent suspect until additional officers arrived on scene.

Emergency Medical Services Agency CPR Save and Stork awards were presented to Communications Dispatchers who provided emergency medical dispatching that helped save a life or deliver a new one.

This report was compiled by Mike Hodgson, associate editor for Lee Central Coast Newspapers. He can be reached at mhodgson@leecentralcoastnews.com.

A male motorcyclist was hospitalized Tuesday after colliding with a pickup truck at the corner of Skyway and Auto park drives near the Santa Maria Airport.

We will always love our Noah, and he will always be our "best boy." Noah John Slocum was not your typical 15 year old boy, and to say that he …

Two people were injured, including a driver who was arrested on suspicion of driving under the influence, following a three-vehicle collision rollover Monday morning along Highway 135 near Goodwin Road in Orcutt.

One day after getting the jolting news that playing softball for her dream school, San Diego State, was no longer a possibility for next year, Righetti High School senior Mackenzie Kestler got busy putting her plans for college on re-start.