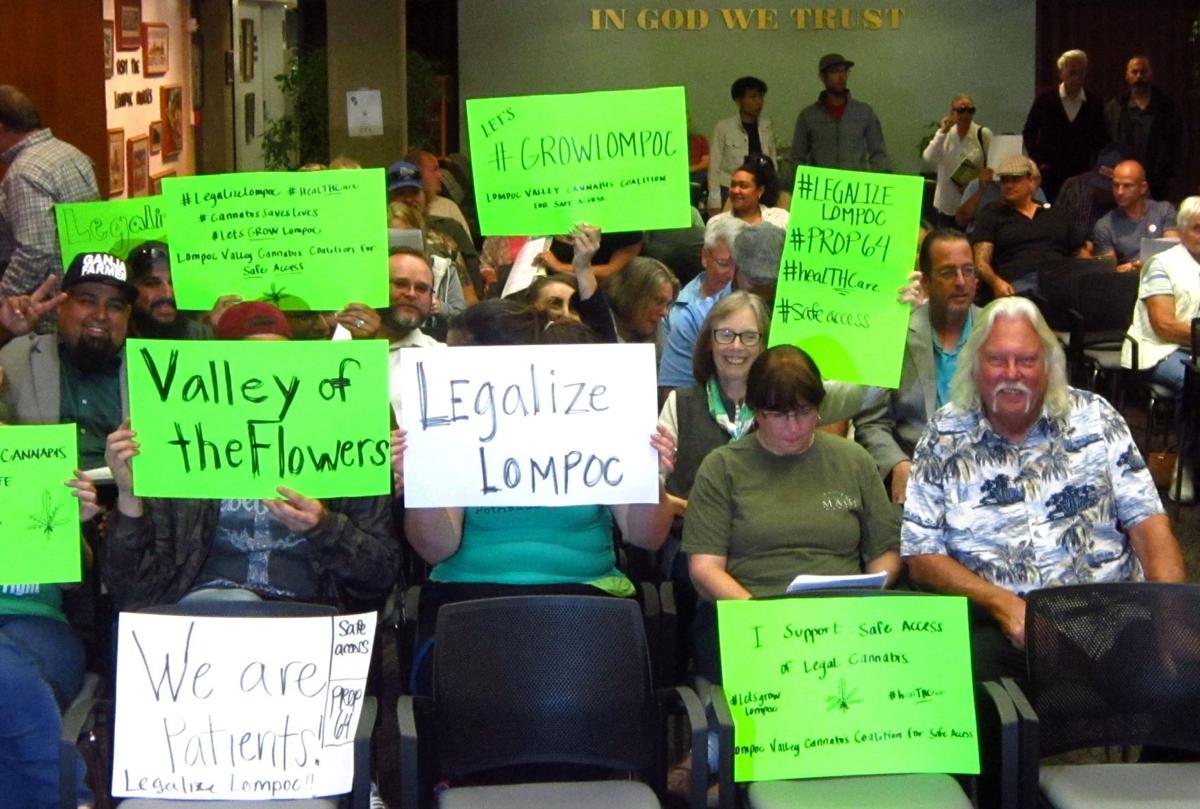 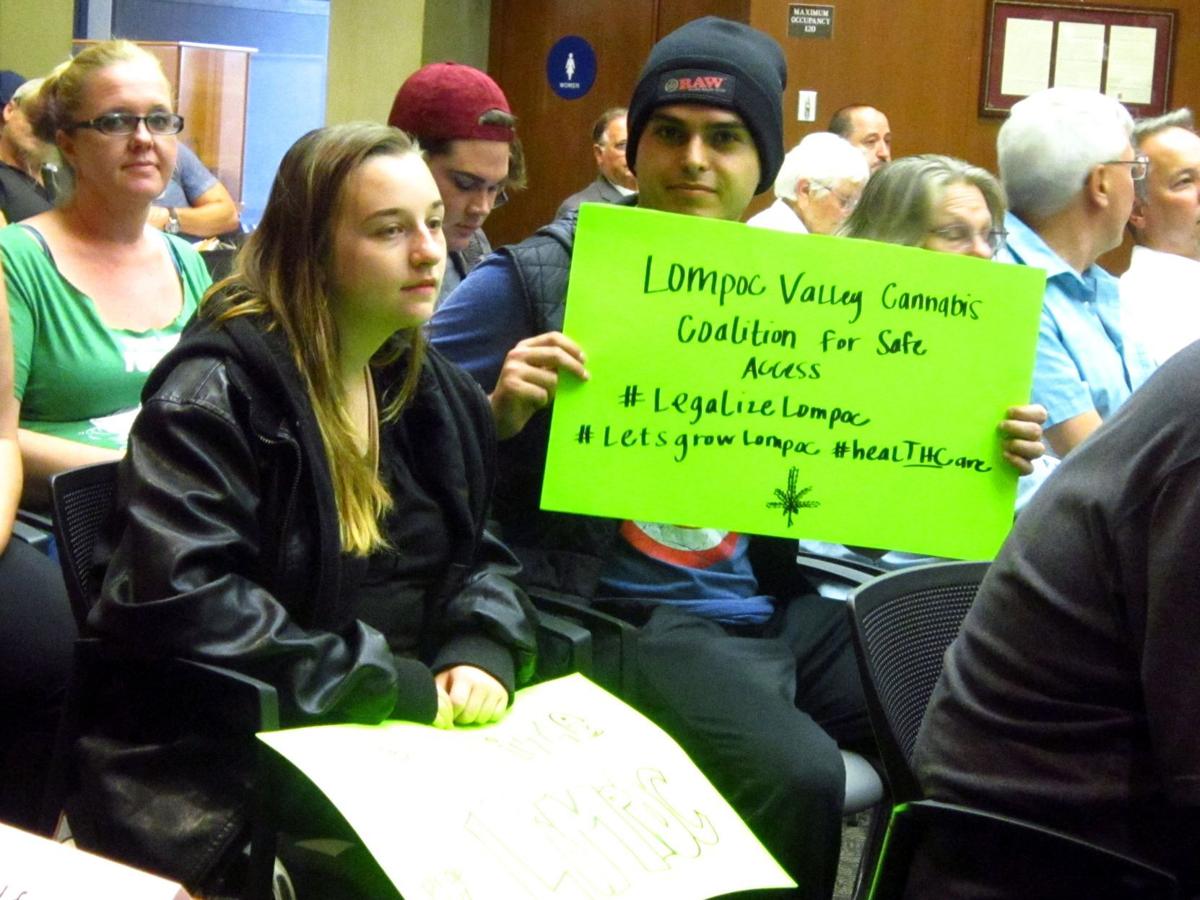 Lompoc resident Jacob Garcia, a self-described medical marijuana user, displays a sign in support of the Lompoc Valley Cannabis Coalition for Safe Access during Tuesday night's special meeting of the Lompoc City Council. The meeting was held strictly for the council to focus on marijuana-related regulations. 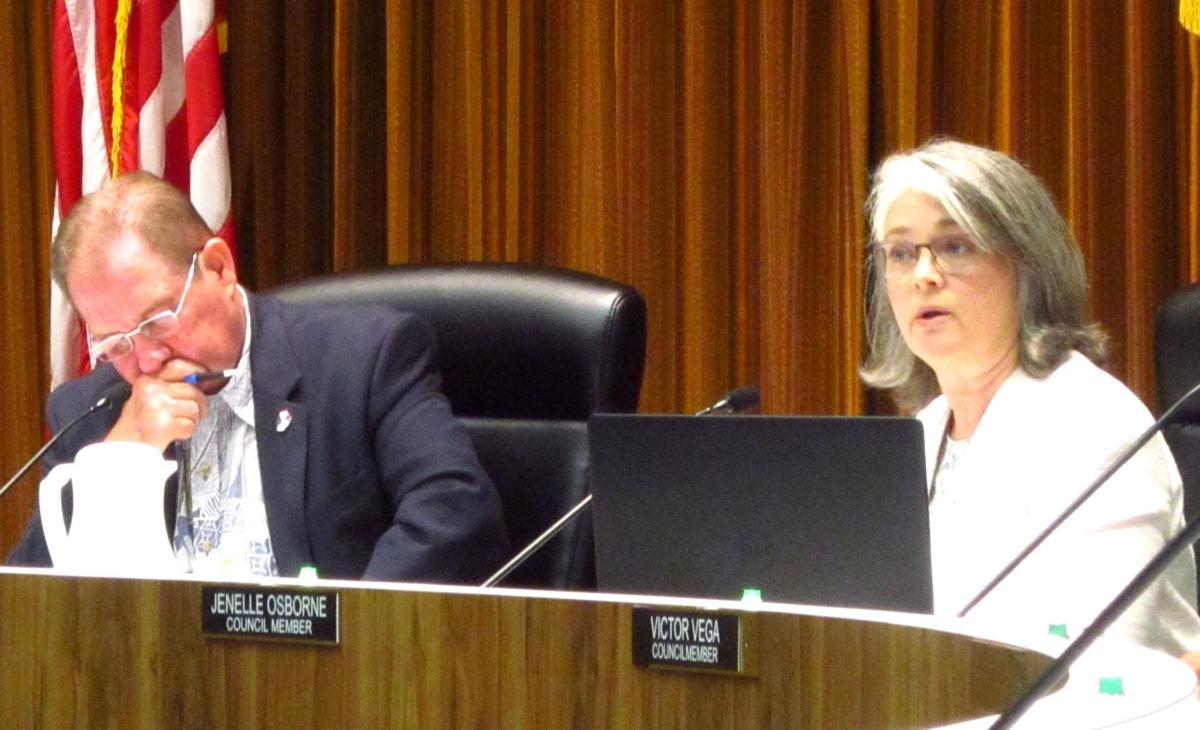 The Lompoc City Council on Tuesday night began the process of moving forward with marijuana-related policies that are light on restrictions and favorable to cannabis users and potential businesses.

About 80 people attended Tuesday night’s special meeting, which was held strictly for the council to dive into and hash out exactly how the city should proceed with medicinal and recreational marijuana regulations. The council quickly reached a consensus to decline enacting any local bans on marijuana use in excess of the state regulations, and then the members went into an extended discussion of the parameters they wanted to see put in place regarding marijuana regulations.

All of the suggestions that were made at the meeting — which spanned personal and commercial uses for both medicinal and recreational marijuana — are set to go back to the council’s ad hoc committee on marijuana for further review and implementation into a policy. The topics included indoor and outdoor cultivation and other uses, commercial and recreational commerce, and local taxation of the industry.

For the most part, the council agreed to require little to no oversight from the city in many areas.

“I expect a certain level of personal responsibility when it comes to personal use and personal growth, whether indoor or outdoor,” said Councilwoman Jenelle Osborne, who led much of Tuesday’s discussion.

Councilman Dirk Starbuck later offered a succinct agreement by saying that he’d prefer government to “stay out of my bedroom.”

The ad hoc committee that will continue developing the cannabis policies is comprised of Osborne and Councilman Victor Vega. The committee was formed Dec. 20, 2016, after the council declined to move forward with a set of marijuana-related ordinances proposed that night by city staff. The council determined that proposal was too restrictive.

Prop 64 is set to go in effect statewide on Jan. 1, so the council will need to adopt its own policies by Nov. 21 in order to have them also implemented on Jan. 1, according to City Attorney Joe Pannone. With that deadline in mind, the council agreed to have the ad hoc committee meet in September and bring its recommendations back to the council at its regular meeting on Oct. 3, so as to have the policy ready for Nov. 21.

Tuesday’s meeting opened with a short presentation from Pannone, who outlined the areas in which the city had authority for local controls and other parameters that the council might wish to consider.

That was followed by a public comment period, during which 26 speakers voiced their concerns. The majority of the speakers were in support of lax marijuana regulations that are in line with the state guidelines set up in Prop 64.

A few speakers implored the council to ban as much as it could, while another raised concerns about the dangers related to pesticides used on marijuana grows.

Osborne opened the council discussion by making a range of suggestions that were ultimately backed by Vega, Starbuck and Councilman Jim Mosby. Mayor Bob Lingl initially made motions to ban all or some marijuana uses within the city, but his motions died after failing to receive any support.

Osborne’s suggestions for grows, both indoor and outdoor, included not requiring city permits, unless alterations were being made to a home. In that case, the permitting process would be required as it normally is.

She suggested that the city not mandate any fencing or enclosures beyond what state law already requires, and that security should be at the discretion of the property owner. She further proposed that renters would need permission from landlords before growing and that the city look at implementing odor controls for all matters, including marijuana.

Regarding marijuana smoking, the council seemed in consensus that it should not be allowed in common areas of multi-family dwellings or in smoking sections of public parks.

The council later reached a consensus to break from its current laws and allow medical marijuana dispensaries within the city. There was discussion on whether a lottery system should be used to determine which businesses are permitted or whether the free market should decide. That issue is expected to be among those that are researched and brought back by the ad hoc committee.

While Osborne noted some of the benefits of the lottery system, other council members seemed in favor of allowing the market to regulate itself.

“We don’t limit the pharmacies that are out there,” Mosby said, adding that the city also doesn’t limit wineries.

“I think the free market could control it,” he later added.

The council also looked at taxation for sales, manufacturing, cultivation and businesses. Osborne offered suggestions based on those proposed by other cities around the state. Notably, she suggested that cannabis testing businesses not be taxed beyond a business license from the city, while other commercial operations would be taxed similar to those in other communities.

The issues not decided Tuesday will likely be discussed by the council following the ad hoc committee’s consideration.

The Lompoc City Council is scheduled to reconvene for its next regular meeting at 6:30 p.m. Tuesday, Sept. 5.

The Lompoc City Council moved forward Tuesday night in its potential transition to district-based elections and, separately, gave a vote of co…

Although the Lompoc City Council once again stopped short of approving a new budget during Tuesday night’s special session, the group seemingl…

It’s not often that the retiree is the most energetic character at his or her own retirement party, but that was certainly the case Thursday f…

'Capital of cannabis on the Central Coast': Lompoc moves toward embracing marijuana industry

In an attempt to help shape future regulations, several Lompoc residents shared their views Thursday on the ways Lompoc could benefit from all…

Like many others around the city and the state, Lompoc resident Joe Garcia said he was ecstatic when Proposition 64 passed by a wide margin in…

Lompoc resident Jacob Garcia, a self-described medical marijuana user, displays a sign in support of the Lompoc Valley Cannabis Coalition for Safe Access during Tuesday night's special meeting of the Lompoc City Council. The meeting was held strictly for the council to focus on marijuana-related regulations.