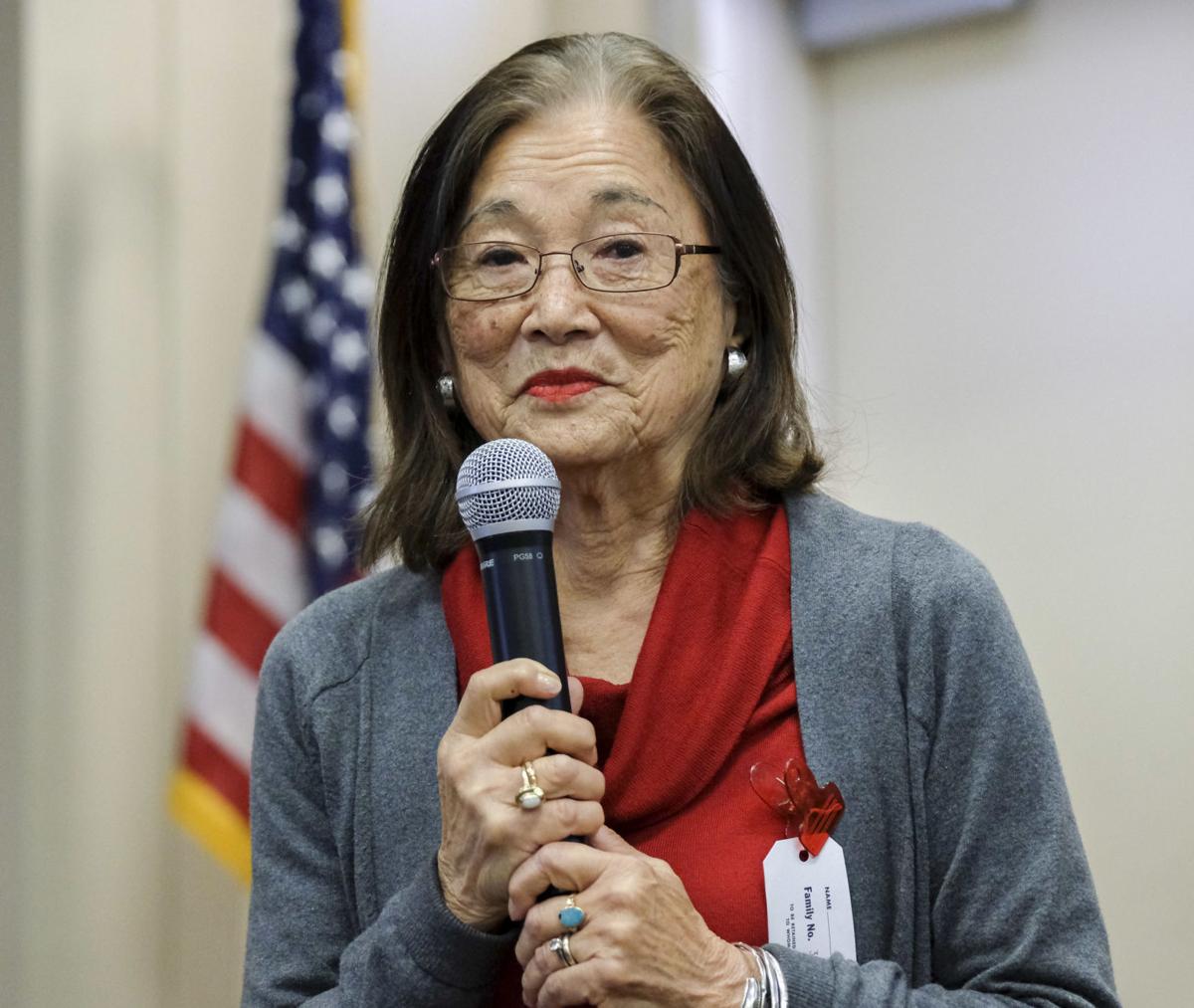 Margaret Nakamura Cooper speaks about living in two different internment camps during World War II in a Heart of the Valley presentation at the Santa Maria Public Library on Saturday. 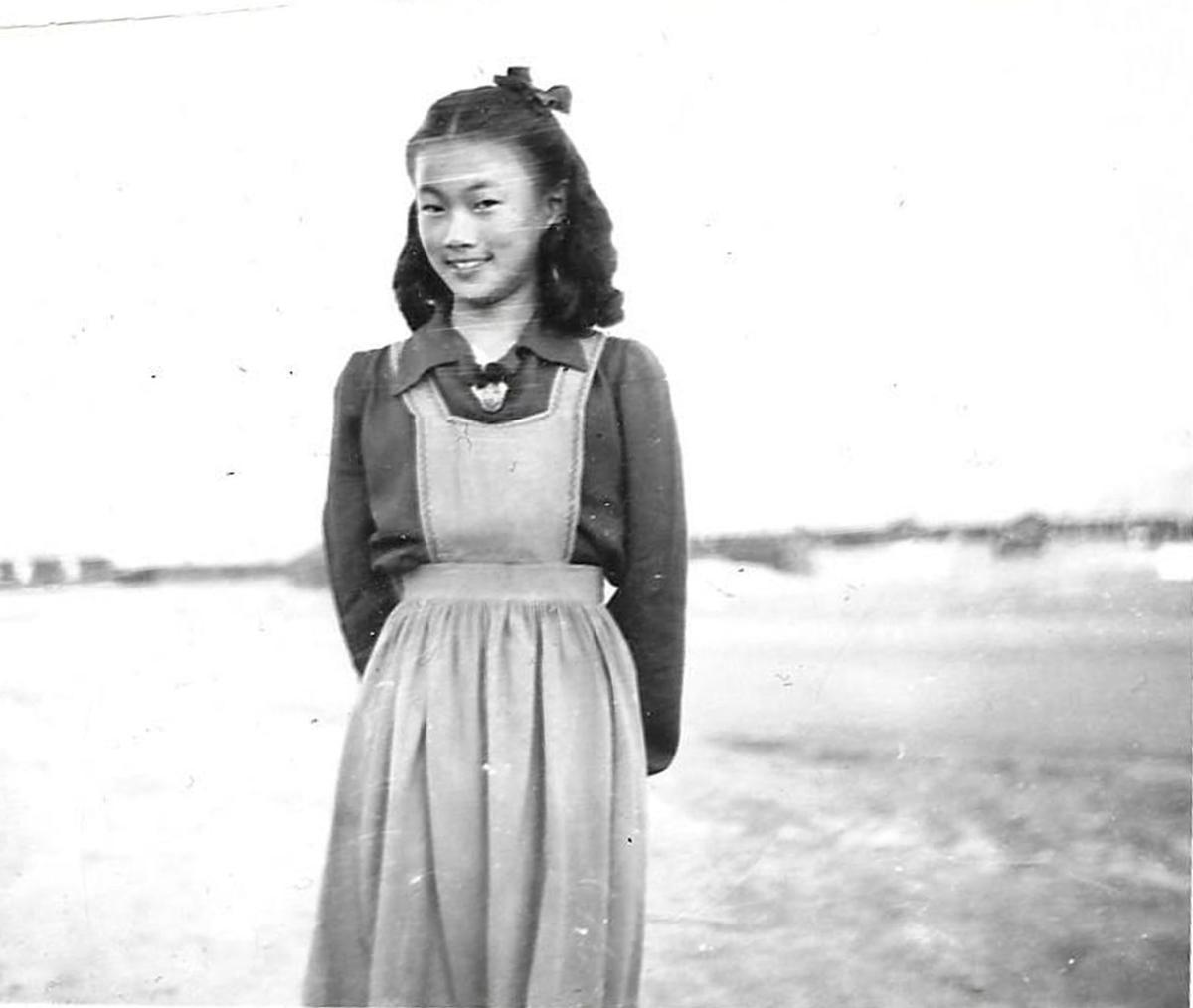 Margaret Nakamura is shown when she was 12 in the Heart Mountain internment camp in Wyoming. 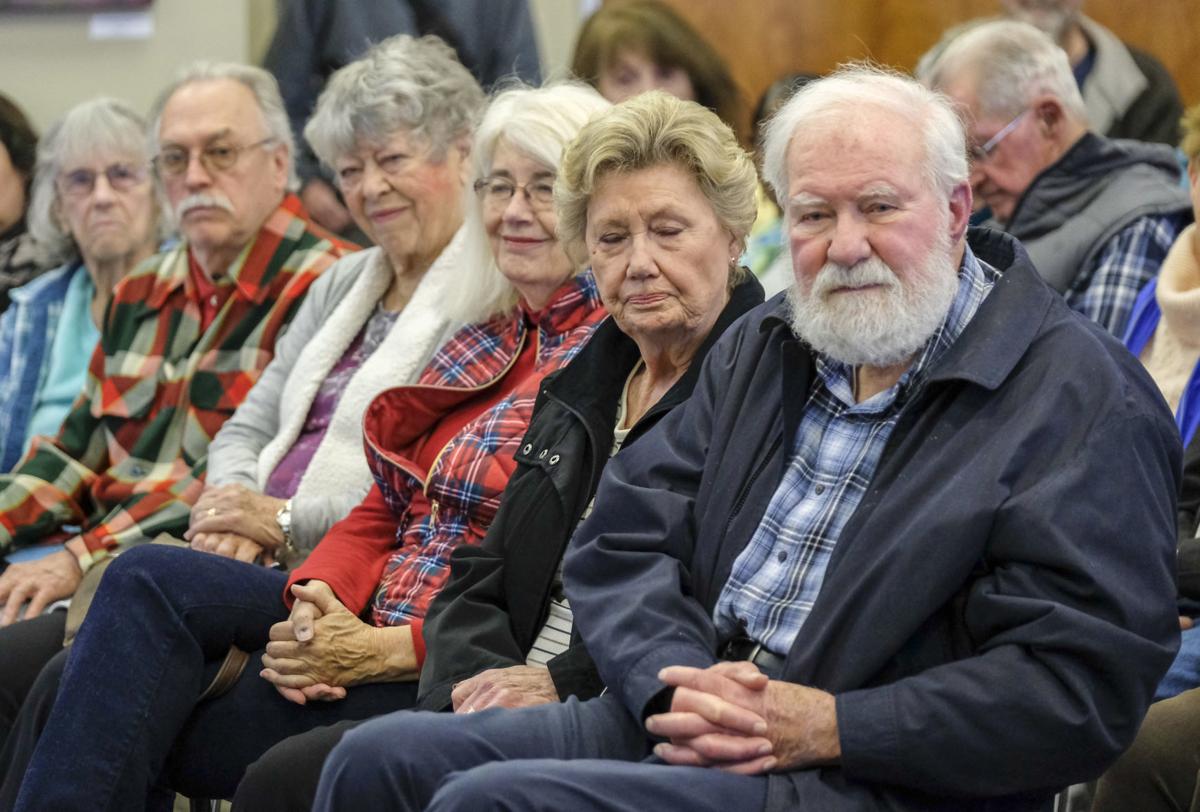 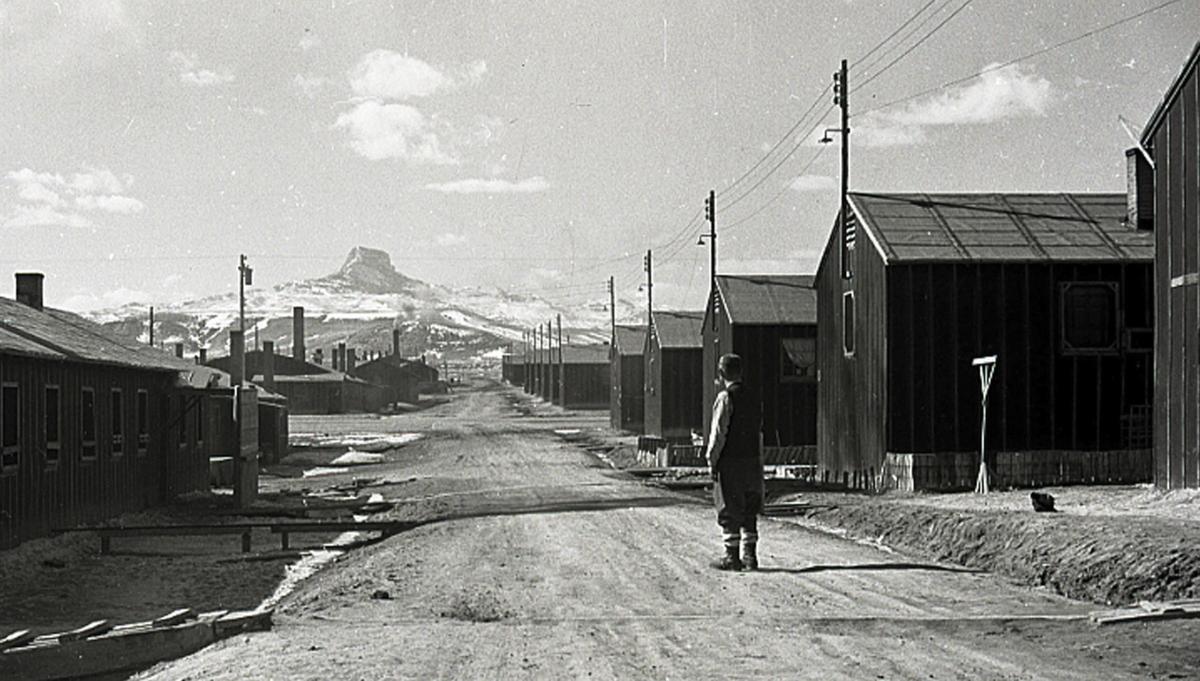 In this photo taken between 1943 and 1945, a Japanese-American boy is shown outside the barracks of the Heart Mountain internment camp in Wyoming. 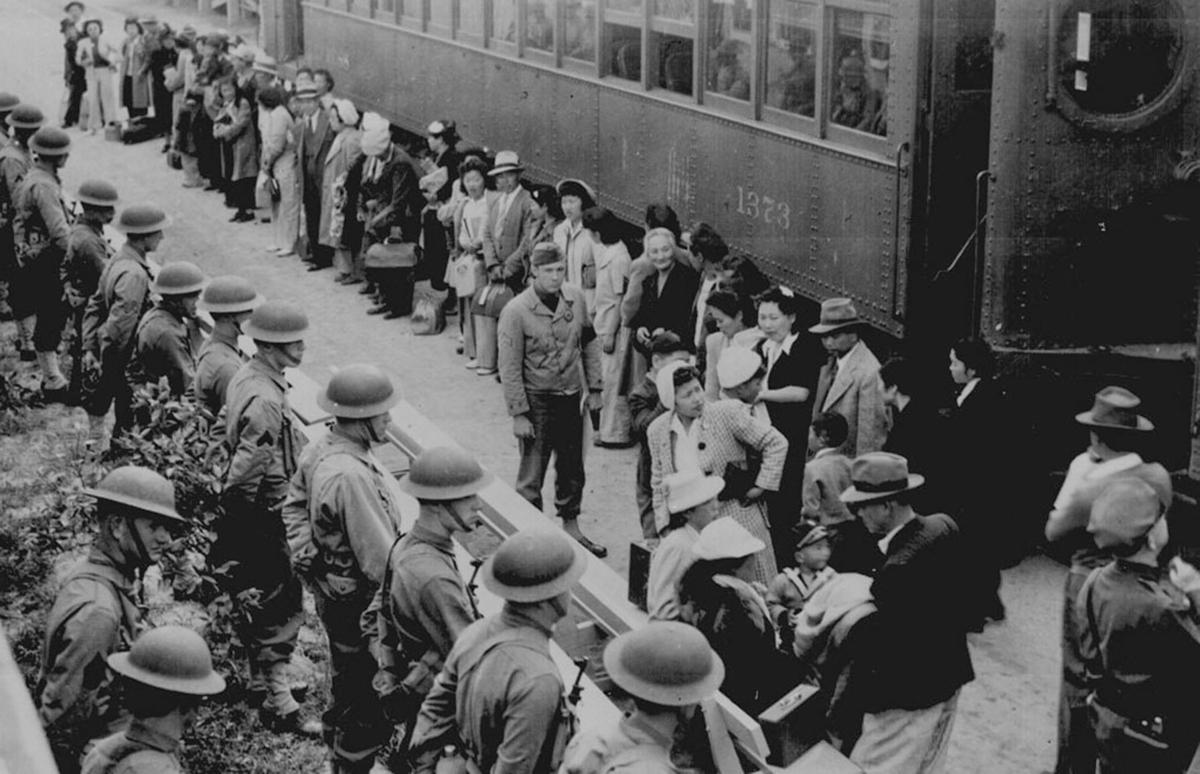 Persons of Japanese ancestry arrive at the Santa Anita Assembly Center on April 5, 1942. Evacuees lived at this center at the former Santa Anita racetrack before being moved inland to relocation centers.

At age 11, she was an active tomboy living on a farm in the Northern California town of Mountain View.

"I broke my leg kicking a football," said Margaret Nakamura Cooper during her talk as part of the Heart of the Valley series at the Santa Maria Public Library on Saturday.

At age 12, Margaret, her father Harry, mother Nelli and three siblings were among 120,000  men, women and children of Japanese ancestry, most of whom living on the West Coast, who were rounded up and sent to internment camps.

Her time in the camps began in April of 1942 and spanned 18 months and two camps -- six months behind barbed wire at the Santa Anita racetrack and the rest of the time behind more barbed wire at Heart Mountain in Wyoming, she said.

"When you're 11, 12 years old [in that situation], you don't really know what's going on. This is my country. I'd never spent one moment in Japan."

Cooper's father was a native of Japan.

"He came to Seattle with $40 in his pocket," and eventually joined the U.S. Armed Forces that fought in World War I, Cooper said.

Her mother was a San Jose native.

After six months, the Nakamura family went from brutally hot conditions at the Santa Anita camp to Heart Mountain, where the temperature once dropped to 36 below zero.

Heart Mountain was located on a desolate Indian reservation, but the size of the camp "made it the third-largest city in Wyoming at the time," she said.

All interred families were tagged. Cooper wore a replica of her family's tag -- family No. 32062 -- on Saturday.

"The camp took 18 months of my life. For some people, it took four years. They had no place to go to. No job. No money. They wanted to stay in the camp."

When her father landed a job, Margaret with her family left the camp, except for one brother.

"He died of spinal meningitis at age 11," she recalled. "[It's] often contracted by living in cramped quarters, and it's very contagious."

Cooper doesn't dwell on her family's confinement, "but I am forever scarred by it. I think of myself as two people -- the person before World War II and the person after World War II," she said.

Margaret Nakamura eventually married Fred Cooper, and the two came to the Central Coast in 1963.

Both were longtime teachers before they retired.

One audience member asked Cooper if she thought what happened to her and other internees was similar to anti-Semitism.

She added, "Especially these days, where some people believe constitutional rights are being abrogated, don't think it can't happen again."

At the end of the presentation, the audience watched a 15-minute documentary narrated by internees about their experiences at the Heart Mountain camp. The comments were striking.

"My God, it's a concentration camp!" one man said upon arrival.

"We lost everything," a woman said.

Another woman said she was 19 when she was first herded to a camp. Though at the time she was several years older than Cooper, she was no less bewildered by her circumstances.

"I loved my flag, I loved my country," she said. "But that wasn't the impression most of the general public had of us."

Cooper and others said many Caucasians were kind during the wrenching time, and many others were not.

"We had to draw the shades because people were throwing rocks and bottles at our windows," one documentary speaker said.

"One of the things about the Japanese spirit is, you just endure," said one woman in the documentary.

Margaret Nakamura Cooper speaks about living in two different internment camps during World War II in a Heart of the Valley presentation at the Santa Maria Public Library on Saturday.

Margaret Nakamura is shown when she was 12 in the Heart Mountain internment camp in Wyoming.

In this photo taken between 1943 and 1945, a Japanese-American boy is shown outside the barracks of the Heart Mountain internment camp in Wyoming.

Persons of Japanese ancestry arrive at the Santa Anita Assembly Center on April 5, 1942. Evacuees lived at this center at the former Santa Anita racetrack before being moved inland to relocation centers.