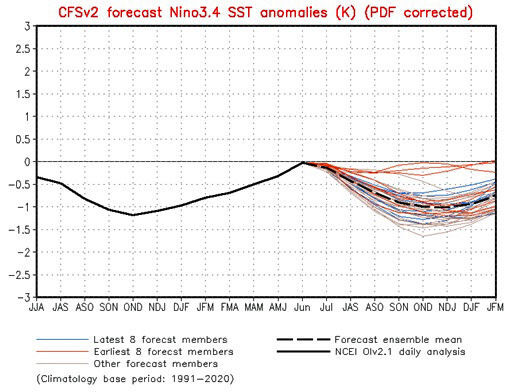 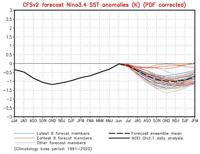 Over the last few months, the Climate Prediction Center was advertising a neutral condition — the infamous “El nothing” or “El Nada” — or even a slight chance of El Niño that would continue through this winter, with the hope of near-normal amounts of precipitation.

However, last week, the U.S. Climate Prediction Center issued a watch for La Niña in the heart of our upcoming rainfall season, November 2021 through March 2022. In fact, the United States National Centers for Environmental Prediction (NCEP) ensemble mean forecast indicates a chance of another La Niña. Unfortunately, some of these model runs are venturing into moderate La Niña territory, just like last winter.

At this time of the year, these predictions are often accurate. Here is why: We are well behind the so-called “spring predictability barrier.” In spring, the El Niño Southern Oscillation (ENSO) is often in transition from one phase to another.

For example, a La Niña phase could be decaying and passing through a neutral condition to an El Niño condition, or vice versa. Of course, as you get closer to winter, the models become more accurate because there is less time for inaccurate oceanographic and atmospheric data to be amplified at model initialization.

So, what is La Niña? In a word, it is mostly ocean temperatures and the way the atmosphere responds to them.

Since 1950, National Oceanic and Atmospheric Administration (NOAA) has used sea surface temperatures to categorize the amount of temperature that deviate from the average, in other words, an anomaly. NOAA uses Niño 3.4, a region of sea-surface temperatures (SST) in the central equatorial area of the Pacific Ocean, as the standard for classifying El Niño (warmer-than-normal SST) and La Niña (cooler-than-normal SST) events. The fortunetelling SST cycles in Niño 3.4 are categorized by the amount they deviate from the average SST over a three-month period.

Neutral or weak La Niña and El Niño conditions typically do not produce reliable seasonal rainfall predictions along the Central Coast, but a moderate, strong, or very strong El Niño or La Niña classification does more times than not.

Overall, moderate or strong La Niña conditions typically produce lower-than-average winter rainfall. However, there have been a few La Niña years that have produced well above average rainfall amounts.

With that said, the predicted La Niña may happen within the context of a larger climate event, a resurgence of a cool phase of the basin-wide Pacific Decadal Oscillation (PDO). The PDO is a long-term fluctuation of the Pacific Ocean that waxes and wanes between cool and warm phases approximately every five to 20 years.

During most of the 1980s and 1990s, the Pacific was locked in the oscillation’s warm phase. But conditions changed in 1999, when the cool phase, which resembles a large La Niña, has tended to dominate the Pacific Ocean.

For the past two decades, La Niña events have been more frequent than warmer El Niño occurrences.

“This multi-year Pacific Decadal Oscillation “cool” trend can intensify La Niña or diminish El Niño impacts around the Pacific basin,” Patzert said. “The reemergence of this large-scale PDO pattern tells us there is much more than an isolated La Niña occurring in the Pacific Ocean.” Said Bill Patzert, a retired oceanographer and climatologist at NASA’s Jet Propulsion Laboratory in Pasadena.

So how do these above or below average seawater temperatures in an area so far away have such a profound effect upon California’s weather?

The answer is in the winds, or should I say the upper-level winds. During an El Niño, the warmer waters in the eastern Pacific produce a more considerable amount of evaporation. As this water vapor ascends into the atmosphere, it often condenses into thunderstorms and releases tremendous amounts of latent heat, further decreasing the atmospheric pressure. This area of low pressure, in turn, changes the path of the southern branch of the polar jet stream, pulling it farther southward toward the Central Coast. This condition, in turn, brings the storms that produce precious rain and snow.

La Niña does just the opposite; it tends to drive the storm track further northward into the Pacific Northwest, leaving the Central Coast with fewer storms.

A few weather forecasters blame la Niña for the “Ridiculously Resilient Ridge of High Pressure” made famous by the previous drought that redeveloped last year. Not only did this high-pressure ridge kept California primarily dry, but it also produced persistent northeasterly (aka Santa Lucia/offshore) winds along the Central Coast.

PG&E Message: Have you ever been on Diablo Canyon Power Plant's Turbine Deck where about 20% of California's carbon-free electricity is generated? Here's your chance. https://twitter.com/PGE_John