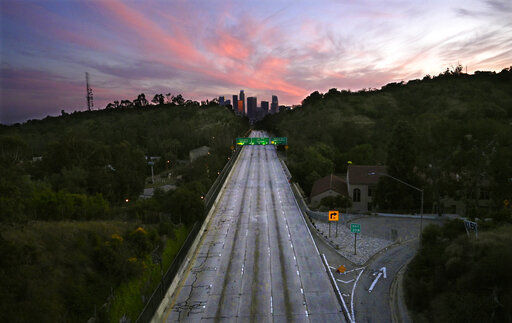 Empty lanes of the 110 Arroyo Seco Parkway that leads to downtown Los Angeles is seen during the coronavirus outbreak. The world cut its daily carbon dioxide emissions by 17% at the peak of the pandemic shutdown in April of 2020, a recent study found. But with life and heat-trapping gas levels inching back toward normal, the brief pollution break will likely be “a drop in the ocean" when it comes to climate change, scientists said.

Empty lanes of the 110 Arroyo Seco Parkway that leads to downtown Los Angeles is seen during the coronavirus outbreak. The world cut its daily carbon dioxide emissions by 17% at the peak of the pandemic shutdown in April of 2020, a recent study found. But with life and heat-trapping gas levels inching back toward normal, the brief pollution break will likely be “a drop in the ocean" when it comes to climate change, scientists said.

I have often been asked the average yearly amount of rainfall for a particular location and how it is calculated.

I saw a tweet from Jan Null last week that answered this question. He has been a meteorologist in the San Francisco Bay Area for over four decades and runs an informative website called Golden Gate Weather Services, ggweather.com.

Null's site stated, "Every decade, the 30-year normals that are the de facto climatological standard, are recalculated. Sometime within the next six months, an update from the 1981-2010 normals to the 1991-2020 normals will be published by NOAA and other agencies around the world. It is interesting to note that over the past decade, all the California stations, except Eureka, show a drop in their 30-year normals, averaging approximately 5%. This shift was largely the result of the drought years across much of the state from 2011 to 2015 that pushed values downward."

I performed an analysis of rainfall data from key Central Coast weather stations and found roughly the same magnitude of decline in rainfall normals. I utilized rainfall data from the Southern California Climate Summaries https://wrcc.dri.edu/summary/Climsmsca.html.

Warmer air can contain more water vapor than cooler air before becoming saturated and condensing into clouds or falling in the form of drizzle, rain, sleet, snow, graupel or hail.

So why is warmer air capable of containing more water vapor than cooler air?

As the temperature of the air increases, the water vapor molecules contained within are also warmed, giving them more energy, which in turn makes it less likely that they will come together and condense or change phases from a gas to a liquid, kind of like a fast dance versus a slow one.

As the atmosphere and oceans continue to warm due to ever-increasing greenhouse gas levels like carbon dioxide, the air can absorb more water through evaporation.

If the dew point temperatures are low and air temperatures high, which is so often the case in California during summer and fall, more rain will evaporate before reaching the ground (virga).

Consequently, this reduces soil moisture and stream flows. Not only does this provide less water for trees and other vegetation, but it also allows the air to remove more moisture directly from the plants, creating bone-dry surface fuels. This condition, combined with other factors, has dramatically increased the severity of wildfires.

Dawn Dunlap lives above Cambria on the Walter Ranch at 1,250 feet of elevation in the Santa Lucia mountains. She told me that this past storm produced more than 17 inches of rain over 54 hours, but the winds were not strong at her home.

Nevertheless, southerly wind gusts estimated at up to 90 mph howled on Jan. 27, around Hearst Castle. Due to orographic enhancement, which happens when larger amounts of rain or snow develop on the mountains' windward side. Like squeezing a wet sponge, moisture from this air mass is released in the form of precipitation. It was reported Doc Miller, who lives a few miles away from Hearst Castle on Pine Mountain, saw nearly 40 inches of rainfall!

Due to the dry Earth, many of the lakes and reservoir levels did not increase as much as hoped. However, Nacimiento Lake saw a rise from 21% of capacity to 41% during this AR event, which drenched its watershed.

Climate Central, https://www.climatecentral.org, an independent organization of leading scientists and journalists researching and reporting the facts about our changing climate, said that the number of days with heavy precipitation has increased in most locations in the U.S. over the past 70 years.