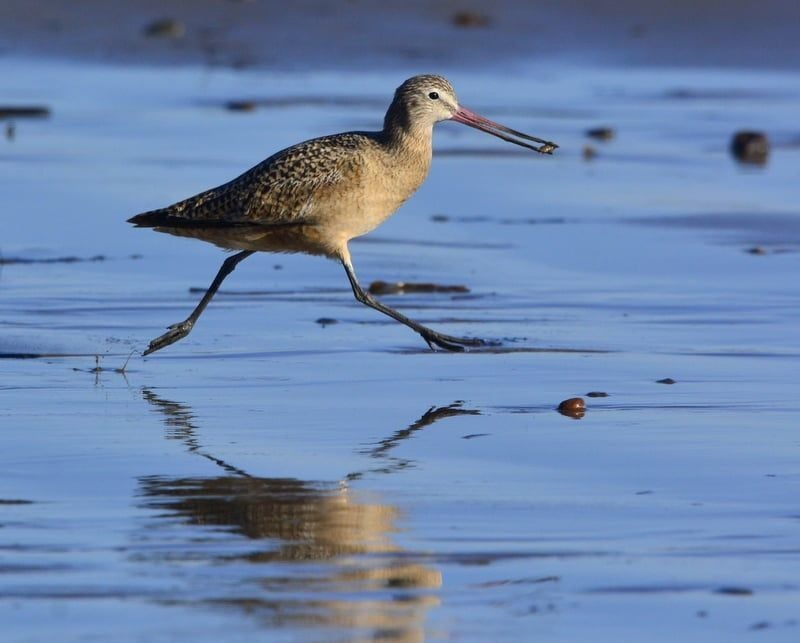 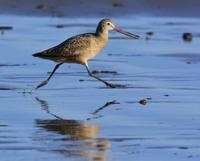 A Marbled Godwit  is seen running to keep its meal from others at the Goleta Lagoon Outflow.

A Marbled Godwit  is seen running to keep its meal from others at the Goleta Lagoon Outflow.

Smaller and smaller electronic Global Positioning System (GPS) tracking devices, satellite tags, and an increasing number of observations submitted by bird watchers worldwide are revealing the staggering long and continuous flights of migratory birds, many of which can be seen along the Central Coast.

Cliff and barn swallows have a streamlined body and relatively long-pointed wings, which gives them both endurance and efficient fuel-to-energy rate. They reach the Central Coast around mid-March of each year from locations throughout South America, like Argentina, where they spend their winters — an epic 6,000-mile-long journey.

Like the swallows, brant geese have a long migration. John Roser of Los Osos has studied these geese for more than 35 years. After meeting with John, I discovered some interesting facts.

The brant geese migrate from Arctic nesting sites in northwestern Canada, Alaska, and Russia to Morro Bay every fall through spring. During the fall, the majority of the geese gather at Lzembek Lagoon in southwestern Alaska, near the Aleutian Islands. This lagoon contains some of the world's most extensive eelgrass beds, which the geese rely on for food.

That staging area allows the geese to add the needed weight and nutrients necessary to complete their migration southward toward Mexico and California. The lagoon supports nearly the entire Pacific Flyway population of brant geese.

When robust low-pressure systems move near the Lzembek Lagoon into the Gulf of Alaska, gale force northwesterly winds develop on the backside of these storms. That provides the tailwinds for the geese as they travel toward Mexico and the western United States. It is believed that when the geese sense those strong tailwinds, they take off at night for their lengthy nonstop journey.

Without the aid of such modern navigational devices as the Global Positioning System, the geese somehow navigate across the vast expanse of the northern Pacific Ocean, often in inclement weather. They clearly have an instinctive sense of direction; some scientists think they possess an internal compass.

Observations from Weather Station Papa in the middle of the Gulf of Alaska and from a U.S. Air Force facility near the Lzembek Lagoon reveal more interesting facts about the geese.

They fly at an altitude of about 4,000 feet. Their average true airspeed is about 50 mph, but when combined with the gale-force northwesterly tailwinds, their speed can exceed 100 mph.

Their spectacular nonstop flight to Mexico or Morro Bay can be accomplished in less than 55 hours, during which the birds can lose more than one-third of their body weight.

Roser explained that scientists have learned from banding the geese that brants can live more than 28 years and might migrate more than 11,000 miles annually. Male and female pairs follow the creed "till death do us part" and fly side-by-side, even during the nonstop migratory flights from Alaska to Baja California, Roser said.

Not to be outdone, it was discovered that the male bar-tailed godwit flew 7,500 miles from the Arctic all the way to New Zealand, a world record for longest nonstop bird migration.

It took this avian 11 days to complete the voyage with no rest. Like the brant geese, they can fly up to 55 mph true airspeed. Before they depart on their epic migration, they must double their weight by gorging on worms, bivalves, and other marine creatures along the Alaskan coastline, where they summer.

Like our swallows, they start their northward Migration in March; however, they’ll make stops along the East Coast of Asia to eat and rest.

The unprecedented lightning storms of mid-August sparked some of the worst wildfires in California’s history. PG&E crews not only repairing — but also hardening — the electric system in the wake of the wildfires. To lean more, please visit www.pgecurrents.com