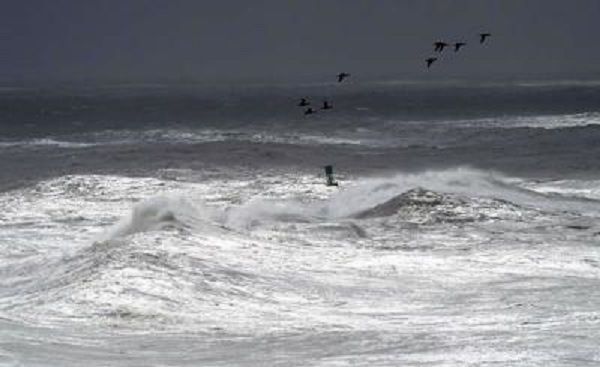 Seabirds fly shoreward over heavy seas near Point San Luis as an approaching cold front begins generating what could be gale- to hurricane-force winds in February of last year.

Seabirds fly shoreward over heavy seas near Point San Luis as an approaching cold front begins generating what could be gale- to hurricane-force winds in February of last year.

As far as the weather was concerned, 2020 will go down as one of the most challenging years our state has ever endured, with record-breaking temperatures, below-average rain and snow, and numerous wildfires covering California with a thick blanket of diabolical smoke.

2020 started with a mostly dry January that turned into a record-dry February, the heart of our rainfall season, which runs from July 1 to June 30 each year. Precipitation amounts dropped to about a third of average throughout the Central Coast.

However, by March, the Eastern Pacific High shifted into the Gulf of Alaska, which opened the storm door. Our weather pattern changed drastically as a series of storms swept through our area and brought much-needed rain.

Overall, most Central Coast locations went from about a third of average rainfall at the beginning of March to one-half to two-thirds of typical rain by the end of this month.

I probably wouldn't classify it as a "Miracle March," like the one we saw in 1991, but perhaps a "Mini Miracle March" as the snowpack in the Sierra Nevada had significantly increased but remained lower than average.

In May, the northwesterly spring winds kicked in along the Central Coast, producing fog-free afternoons, high seas, and vast amounts of upwelling. That, in turn, brought frigid, clear, and nutrient-rich water from the ocean's depths to the surface along the immediate shoreline. The winds relaxed, which produced plankton blooms, and the illuminating phenomenon that is called bioluminescence created glowing electric, blue-colored waves that crashed on our beaches.

In June, a bright comet is lit-up the skies. It was named NEOWISE after NASA's Near-Earth Object Wide-field Infrared Survey Explorer spacecraft that first discovered it coming from a dark part of the night sky.

In August, a mesoscale subtropical storm intensified and moved northward toward the Bay Area. The tempest produced thousands of lightning strikes over the coastal mountains of Northern and Central California. The outbreak of lightning marked the start of one of the worst heat waves ever to grip the state. Over that period, daily temperature records fell like bowling pins. Paso Robles Municipal Airport reached more than 110 degrees Fahrenheit three days in a roll, breaking the old daily records. The Cal Poly RAWS station in San Luis Obispo hit 112 degrees, and the Santa Maria Airport saw five straight days of record-breaking temperatures. These record-breaking temperatures reduced the moisture levels in vegetation. This helped hundreds of small lightning-triggered fires in California's coastal mountain ranges to rapidly grow and merge into huge complexes that became some of the biggest blazes California has ever seen. Smoke from these fires covered nearly the entire western United States. Many Central Coast locations reported the worst air quality readings on Earth. I have never seen anything like it.

This heatwave also caused another problem, the outbreak of sudden branch drop. This syndrome, also known as summer branch drop, occurs when oak and other types of trees self-prune during the summer and fall, often with little or no wind. I received emails and photos of giant oak trees losing large limbs. There are typically no warning signs of limb loss — just the sound of an explosion-sharp crack followed by a loud thump and whooshing as the hefty bough whacks the ground.

On Sunday, Sept. 6, temperatures hit a Death Valley-like 122 degrees Fahrenheit in Solvang, Cal Poly reached 120 degrees, busting the previous campus heat record of 112 degrees set in September 1971. The San Luis Obispo, Paso Robles, and Santa Ynez airports all reported a high 117 degrees. After extensive research of the climate summaries, these may have been the hottest temps ever recorded so close to the Atlantic or the Pacific Oceans in North, Central, or South America.

On the last day of 2020, a 921-millibar storm developed near the Aleutian Islands. This mid-latitude cyclone broke the record for the lowest atmospheric pressure reading in the North Pacific Ocean. A marine buoy near the storm reported a significant wave height of 58 feet with a 19-second period with maximum waves reaching over 100 feet! Understandably, the buoy's anemometer stopped working. Swell from this storm will arrive along the Central Coast during the first week of 2021.

PG&E annual scholarship opportunities are now open for applications. Both college-bound high schoolers and current college students who are PG&E customers with primary residences in Northern and Central California are eligible to apply. More than 120 awards totaling nearly $300,000 are being made available through PG&E's employee resource group and engineering network group. Information about the scholarships, including criteria and applications, can be found at pge.onlineapplications.net/applications. Applications are due by Feb. 12, 2021.