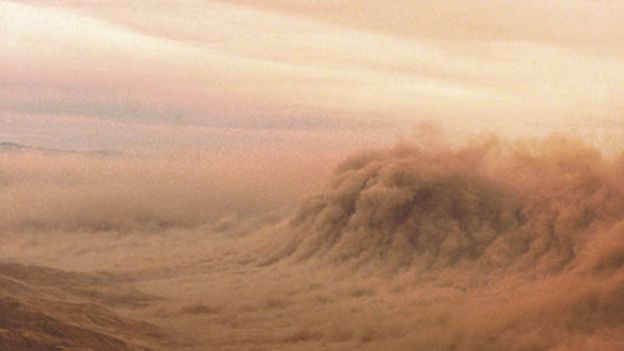 This photo, taken from an aircraft, shows the sandstorm over Arvin in 1977.

This photo, taken from an aircraft, shows the sandstorm over Arvin in 1977.

Most numerical models indicate that an intense low-pressure system will slide southward down the Sierra Nevada's spine into Southern California early this week. A strong high-pressure ridge to the north will create a steep pressure gradient that will produce strong to gale-force (25 to 38 mph) easterly winds with locally higher gusts of 55+ mph in the coastal passes, gaps, canyons, and ridgetops Monday night into Tuesday morning. At one time last week, it was thought that these winds could have been even more substantial.

These predicted winds stoked my curiosity: What were the strongest winds ever recorded in Central California. This is what I discovered.

In March 1995, a storm developed about 900 miles off the Central Coast and caused an intense cold front to stall over our area that tapped into a plume of subtropical moisture (atmospheric river) that stretched to Hawaii. The rain began to fall early on Mar. 9 and continued through the next day, producing remarkable 24-hour rainfall totals. They ranged from a low of 3.4 inches in Pismo Beach to 11.6 inches in Santa Margarita.

Not to be outdone, a storm developed off the Central Coast on Jan. 17 and 18, 1988. This major storm made landfall near Pismo Beach, where the surface pressure dropped to 979 millibars, one of the all-time low-pressure readings for our area. The strongest winds with this tempest occurred at Platform Harvest, approximately 16 miles west of Point Conception, where it was reported that northwesterly winds reached a sustained speed of 78 mph from the northwest.

Be prepared for emergencies!

Before emergencies occur, it is a good idea to create an emergency supply kit. Stock up on enough supplies to last a week. Put the items in waterproof containers and store them in a place that is easy to reach. To learn more on how to prepare the kit, visit www.pge.com.

As you might imagine, winds of these magnitudes apply great forces on any object in their path and more than strong enough to damage roofs, break tree limbs, and even blow trees over, especially if the soil is saturated.

Even a small increase in wind speed can significantly increase the force applied to objects, such as the surface of the ocean, buildings, or trees. For example, if you double the wind speed from 22 mph to 44 mph, you are quadrupling the amount of force.

There have been two occurrences of confirmed tornadoes. The first occurrence happened on Apr. 7, 1926. A Pacific storm from the west produced lightning that struck large oil tanks along Tank Farm Road and caused a massive fire. As a result, hundreds of fire whirls formed. The second confirmed tornado happened on the morning of May 5, 1998, near Cal Poly.

Further inland, one of the strongest wind events in California's history occurred in the southern San Joaquin Valley on Dec. 20, 1977. Much like this year, the Eastern Pacific high was entrenched off the California coastline and kept the storm track far to the north. Due to one of the worst droughts in California history, the San Joaquin was more parched than typical. As the winter of 1977 approached, the air over the western United States' high deserts cooled and became dense and heavy.

On Dec. 20, a large area of high pressure moved southward over the Great Basin. Simultaneously, an intense low-pressure system and its associated cold front approached the coast of Northern California. This condition produced a very steep pressure gradient through the Central Valley. The air flowed in a clockwise direction around the high-pressure system, forcing cool and dry desert air down the Tehachapi mountain canyons toward the southern San Joaquin Valley. As gravity pulled the air mass toward the valley floor, it funneled through the mountain passes and canyons, producing hurricane-force east-southeasterly winds.

Vehicles that were left outside during that sandstorm were literally sandblasted. Not surprisingly, large volumes of dust were carried northward through the San Joaquin and Sacramento valleys toward the Oregon border. Dust from this storm obscured the sun as far north as Colusa County. Months later, PG&E hydrographers found a layer of dust embedded in the snowpack in Mount Shasta.

An outbreak of valley fever followed as spores traveled into Sacramento and Redding. Great apes at the San Francisco Zoo caught the fever.