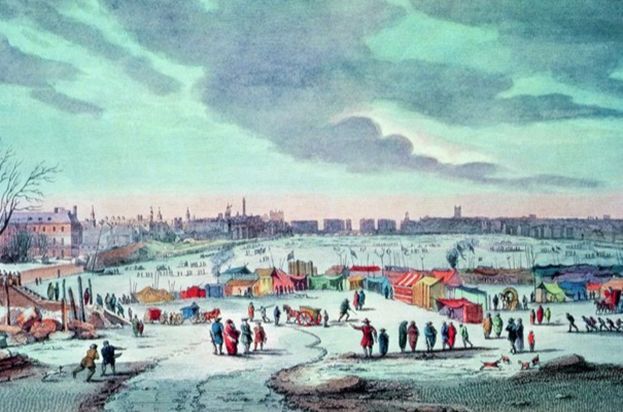 This engraving depicts London in the winter of 1683-1684 when "frost fairs" were held on the frozen Thames.

This engraving depicts London in the winter of 1683-1684 when "frost fairs" were held on the frozen Thames.

I received an interesting question by way of an email from a reader last month.

"Do you believe that a grand solar minimum will have a significant effect on future global temperatures?"

To start with the basics, a solar minimum is the period of least solar or sunspot activity in the 11-year solar cycle of the Sun. In contrast, a grand solar minimum is hypothesized to last for decades.

To look further into the cycles of the Sun and their impact on global warming, I decided to forward this question to Dr. Ray Weymann. Weymann is a retired director and chair of the Astronomy Department at the University of Arizona and director and staff member emeritus of the Carnegie Observatories in Pasadena who lives locally in Atascadero.

Here is his thoughtful response.

Visualize Moscow in winter, and you may think of people in fur hats making their way through bone-chilling temperatures in the mid-teens. Yet, visit Glasgow, Scotland in mid-winter, and the average low temperature is several degrees above freezing, despite the two cities having the same latitude. A significant reason for this difference is the warm ocean water carried up to Scotland by the Gulf Stream.

But England and Scotland have not always enjoyed such mild winter weather. The attached engraving depicts London in the winter of 1683-1684 when "frost fairs" were held on the frozen Thames, with bitter cold, crop failures, and widespread suffering. This winter fell during a period of a few centuries with long cold snaps primarily felt in Europe. This period is the "Little Ice Age," as distinguished from more severe cycles of many thousands of years of vast glaciers.

There is no scientific consensus on the leading cause of the Little Ice Age. Shifts in atmospheric pressure patterns and ocean currents like the gulf stream may have contributed. So too may have been periods of more vigorous than usual volcanic activity since ash spewed into the sky prevents some sunlight from reaching the earth's surface.

A third possible contributor may have been a slight dimming of the Sun itself. Shortly after the invention of the telescope, astronomers daily projected images of the Sun to record the number of sunspots. (Warning: Never look directly at the Sun through a telescope!) Records show that the Sun was virtually spotless during a period from about 1640 to 1700. Modern observations from space have established a strong relationship between periods when there are lots of sunspots and a very slightly brighter than average sun, and a marginally fainter sun with periods with few spots.

Typically, the Sun goes through an eleven-year cycle with lots of spots to one with few spots. But one group of solar astronomers think we may head for another prolonged period of few spots and solar dimming, while others disagree. Upwelling currents of the electrically conducting gases in the Sun generate the Sun's magnetic fields, which give rise to the sunspots. Complete understanding of even the eleven-year cycle, let alone longer-term changes, is still in the future, however.

Nevertheless, suppose the first group is right. Should we then worry about another "Little Ice Age?" Almost certainly not. Here is why.

While fluctuating changes in ocean and atmospheric circulation (long-term 'weather') cause regional climate changes, long-term global changes are caused by changes in the overall energy flow in the earth's climate system. All our warmth comes from 70 percent of the Sun's energy that is not reflected back to space. The earth maintains energy balance by radiating an equal amount of heat energy back into space. It is "self-adjusting" since the amount of this radiated energy depends upon the earth's surface temperature--a higher surface temperature radiates more heat. But only about 60 percent of this energy can escape to space, while 40 percent is re-directed by greenhouse gases, like carbon dioxide, back to the earth's surface.

Change any of these energy factors, and you will warm or cool the earth as it tries to restore energy balance. We are currently changing one of these factors by rapidly increasing greenhouse gases in the earth's atmosphere, warming our world.

But would the amount of solar dimming that we may experience overcome this? It turns out, only for a short period of time. We can now 'calibrate' the amount of reduced solar energy experienced during the Little Ice Age. When this is compared with the increased heat-trapping at our present rate of increased greenhouse gas levels, it turns out that in just six years or so, the effects of a dimming sun would be overcome, and further warming will continue.

The message is clear: We must reduce our dependence on fossil fuels as our primary source and switch to sources that do not produce greenhouse gases. A period of a spotless sun will not spare us from further warming.

For a detailed discussion of this subject and other aspects of climate change, please visit http://www.centralcoastclimatescience.org/

Thinking about the Central Coast and how fortunate we are to live here, here is a beautiful video describing the microclimates surrounding the Diablo Canyon Power Plant along the Pecho Coast, with scenic views of the hills, canyons, trails, and ocean. https://www.youtube.com/watch?v=SjPY_8zapdg&amp;t=5s

PG&E’s Safety Action Center website (https://www.safetyactioncenter.pge.com/) offers easy-to-use educational videos and visual guides with tips on how to create defensible space, which is the buffer area between a home and any vegetation or material that could fuel a wildfire.