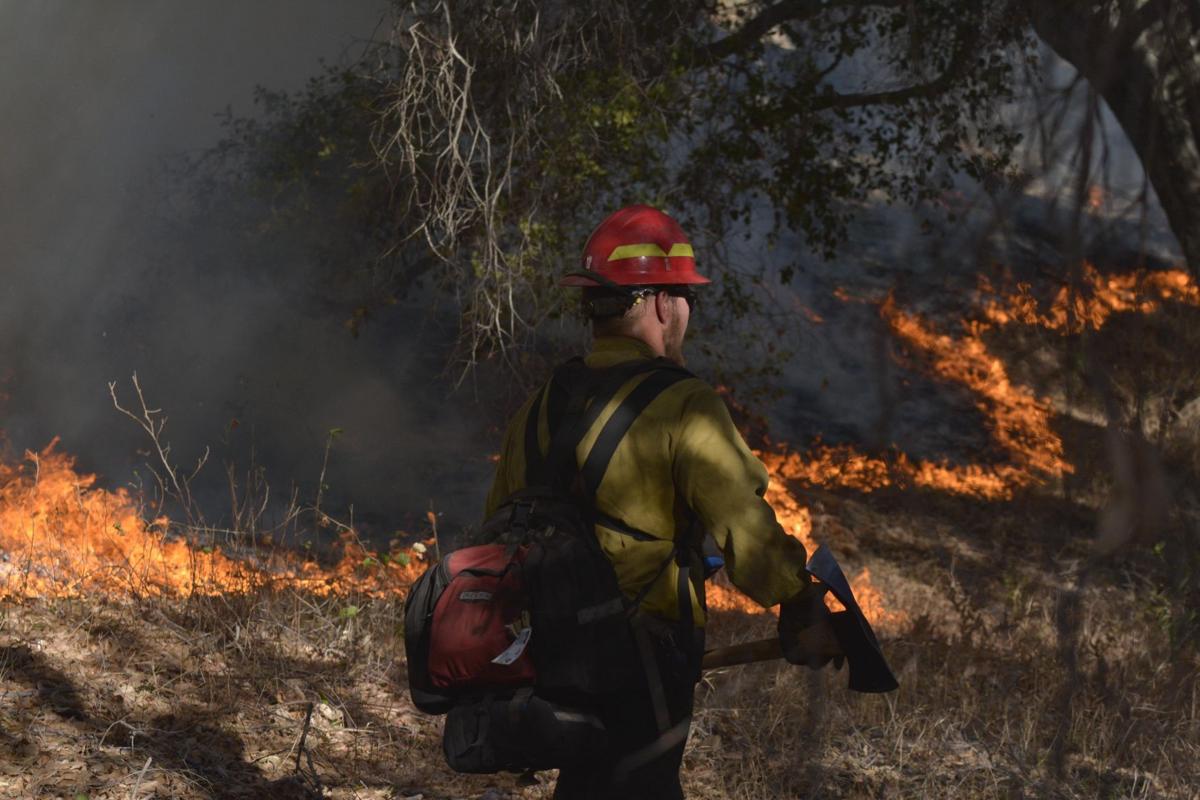 A firefighter watches the approach of flames during the Rey fire north of Paradise Road on Thursday. 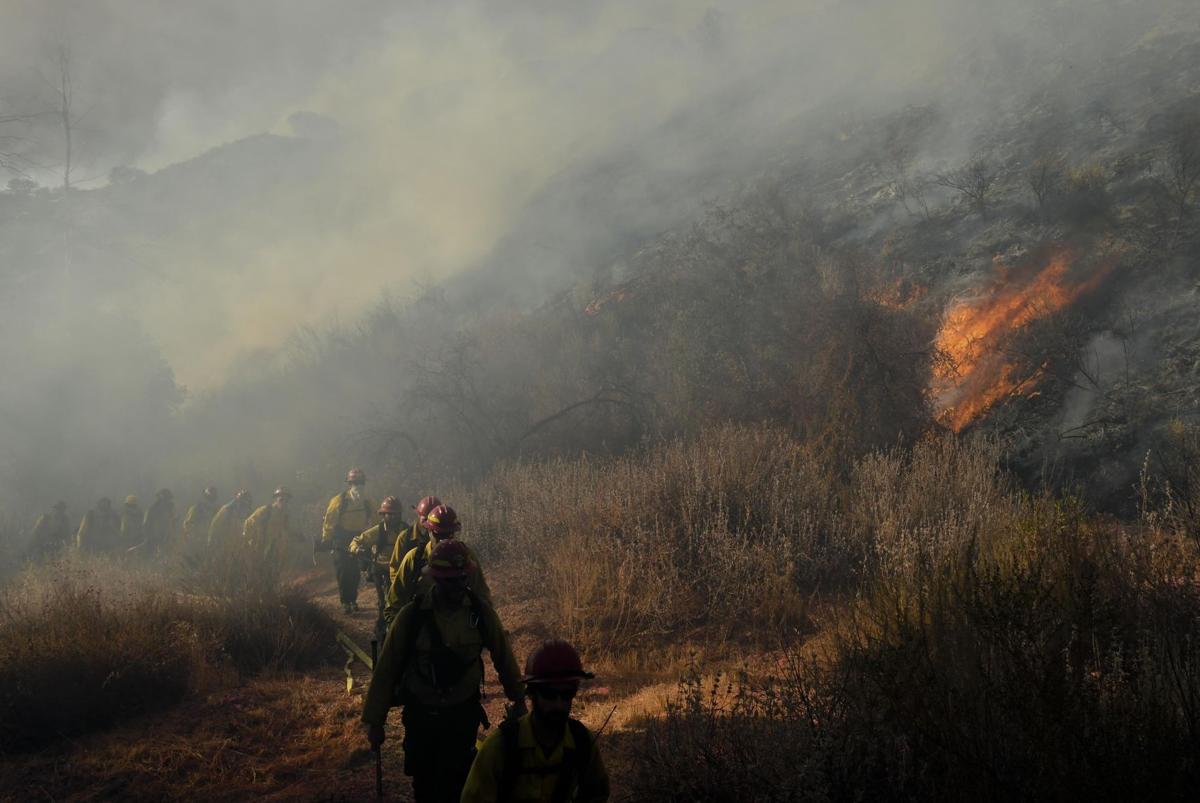 Brush crews fall back to a hot spot in the Rey fire above the Santa Ynez River on Thursday. 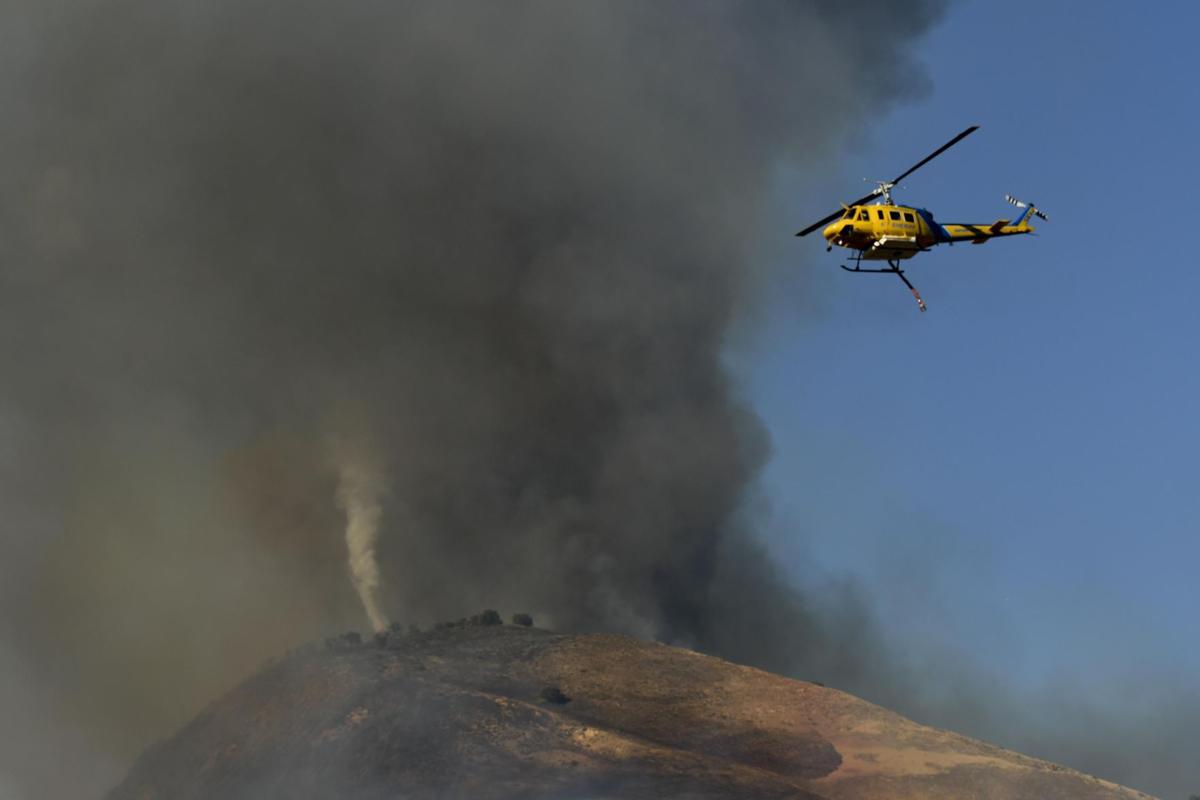 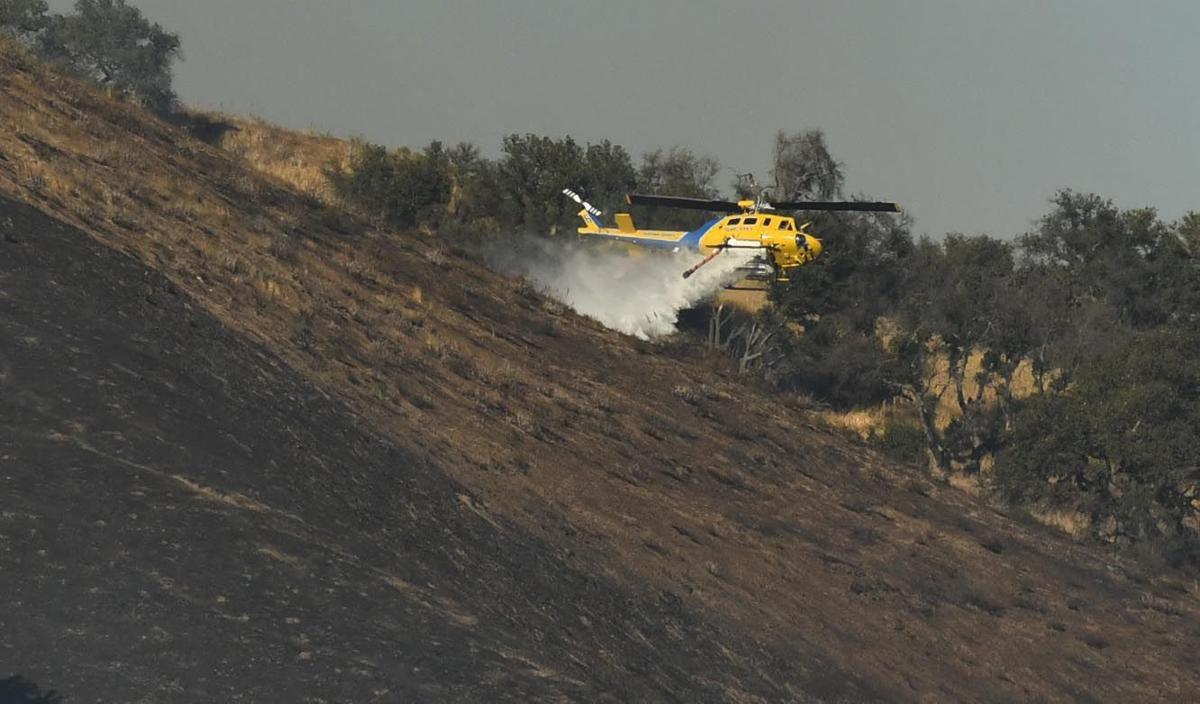 A helicopter makes a low pass to drop water on the Rey fire near Paradise Road on Thursday.

As of Saturday morning, firefighters have contained about 10 percent of the 10,782-acre fast-moving vegetation blaze dubbed the Rey fire, which sparked Thursday near White Rock Campground in the Los Padres National Forest.

About 500 fire crew members first began focusing most of the attention on the northeast of the Santa Ynez River Friday afternoon, according to officials. However, the fire on the northwest began growing due to increasing winds and change in wind direction Friday afternoon. Officials said the fire is moving in a northerly direction into National Forest system lands.

Smoke is visible from the Santa Barbara area.

Wind speeds were expected to pick up Friday evening, but no structures are under immediate threat.

"We have a little more fire activity toward the northeast side of the Santa Ynez River again," said Manuel Madrigal, public information officer for Los Padres National Forest. "Other than that, it was looking pretty good today on the northwest side after the wind directions changed late Friday afternoon."

Madrigal said that in the northeast area, the fire began charring canyons but well within the fire lines.

"We're expecting more smoke to be coming in throughout the night and into Saturday, and we'll have the same humidity conditions, same level of marine layer last Thursday night, so hopefully that helps us out," he added.

Depending on the growth of the fire, more fire personnel will be added to fight to the fire into the weekend.

Air tankers and helicopters are out on scene assisting crew members, and the evacuation of Paradise Road was still in effect as of Friday evening.

Paradise Road campgrounds, parts of Stagecoach Road and the Los Prietos Boys Camp are under evacuation. Highway 154 has been reopened, but Paradise Road remains closed.

Engines and crews from the Los Padres National Forest, Santa Barbara County and nearby municipalities continue working to contain the fire. Two injuries were reported Friday, one due to heat and one due to bee stings.

Temperatures will consistently be in the 90s in the area of the fire, with a minimum relative humidity between 5 to 10 percent. The humidity levels will remain throughout the weekend.

No additional evacuations are anticipated at this time. The Red Cross shelter at Santa Ynez High School has closed but will remain on standby.

Officials are urging forest visitors to be extremely careful with anything that could cause a spark.

"The safest fire condition for our firefighters is the fire that never starts," said district ranger John "Pancho'"Smith.

Members of the public are urged to observe fire restrictions when recreating on national forest system lands.

On Thursday, more than 300 residents and campers in the area of Stagecoach and Paradise roads and the Los Prietos Boys Camp were issued mandatory evacuation orders. By Thursday evening, the Rey fire had burned more than 500 acres. Highway 154 was closed in both directions between Highway 246 (at the roundabout near Santa Ynez) and the State Route 192/Cathedral Oaks Road in Santa Barbara.

Aircraft were diverted from other fires in the state to fight the Rey fire, which was reported about 3 p.m. when officials were alerted to black smoke coming from a hillside near Paradise Road.

The county Public Health Department and the Air Pollution Control District issued an air-quality watch for the county Thursday night to remain in effect until conditions change.

The cause of the fire is under investigation.

According to Cal Fire, the Rey fire off of Highway 154 and Paradise Road has now burned 2,700 acres and is just 20-percent contained as of Fri…

A firefighter watches the approach of flames during the Rey fire north of Paradise Road on Thursday.

Brush crews fall back to a hot spot in the Rey fire above the Santa Ynez River on Thursday.

A helicopter makes a low pass to drop water on the Rey fire near Paradise Road on Thursday.