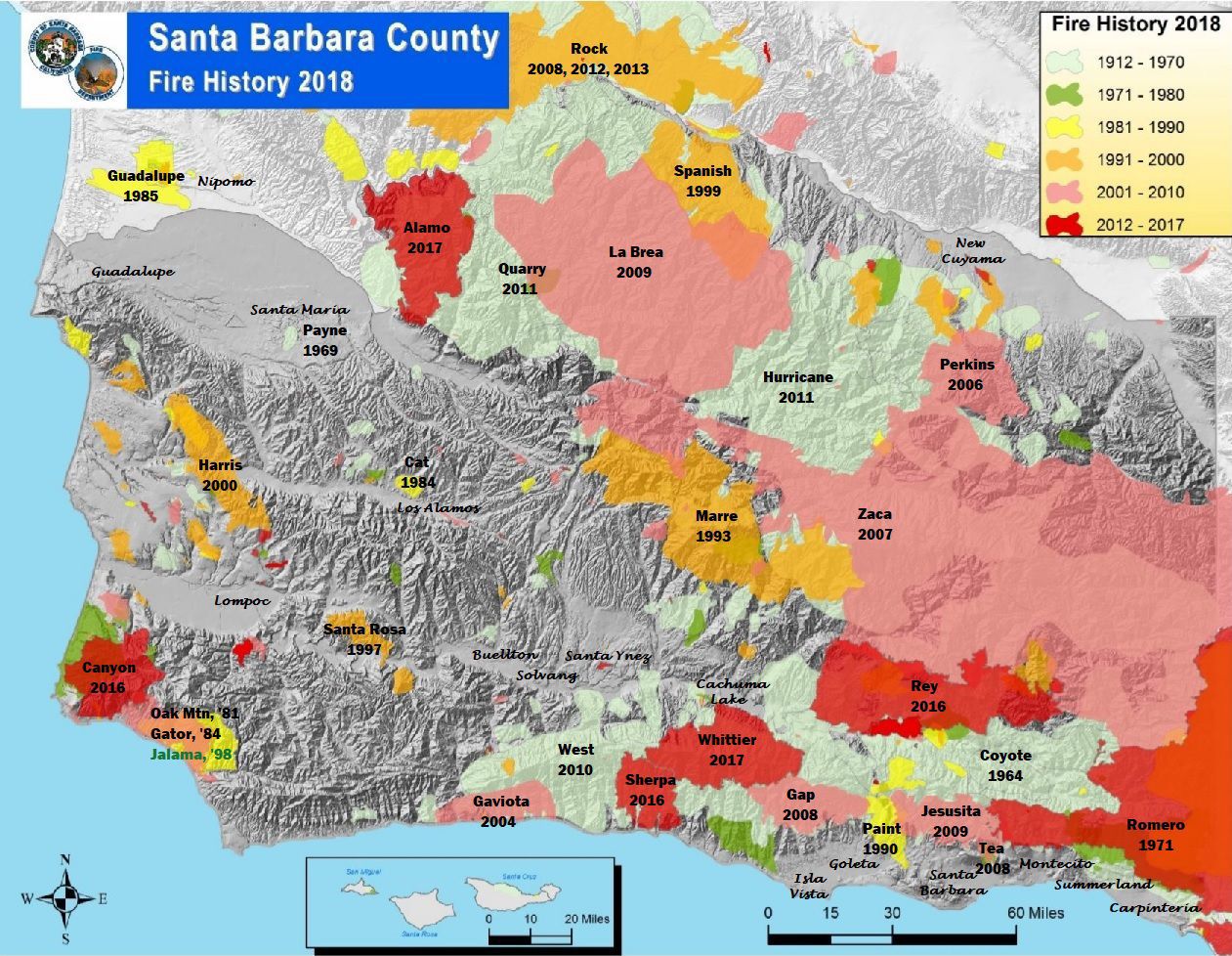 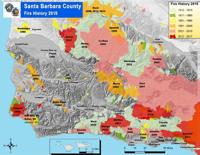 Major fires in Santa Barbara County, from 1912 to 2018, with their names, approximate size and the year they occurred are shown on this map with burns color-coded by decade. 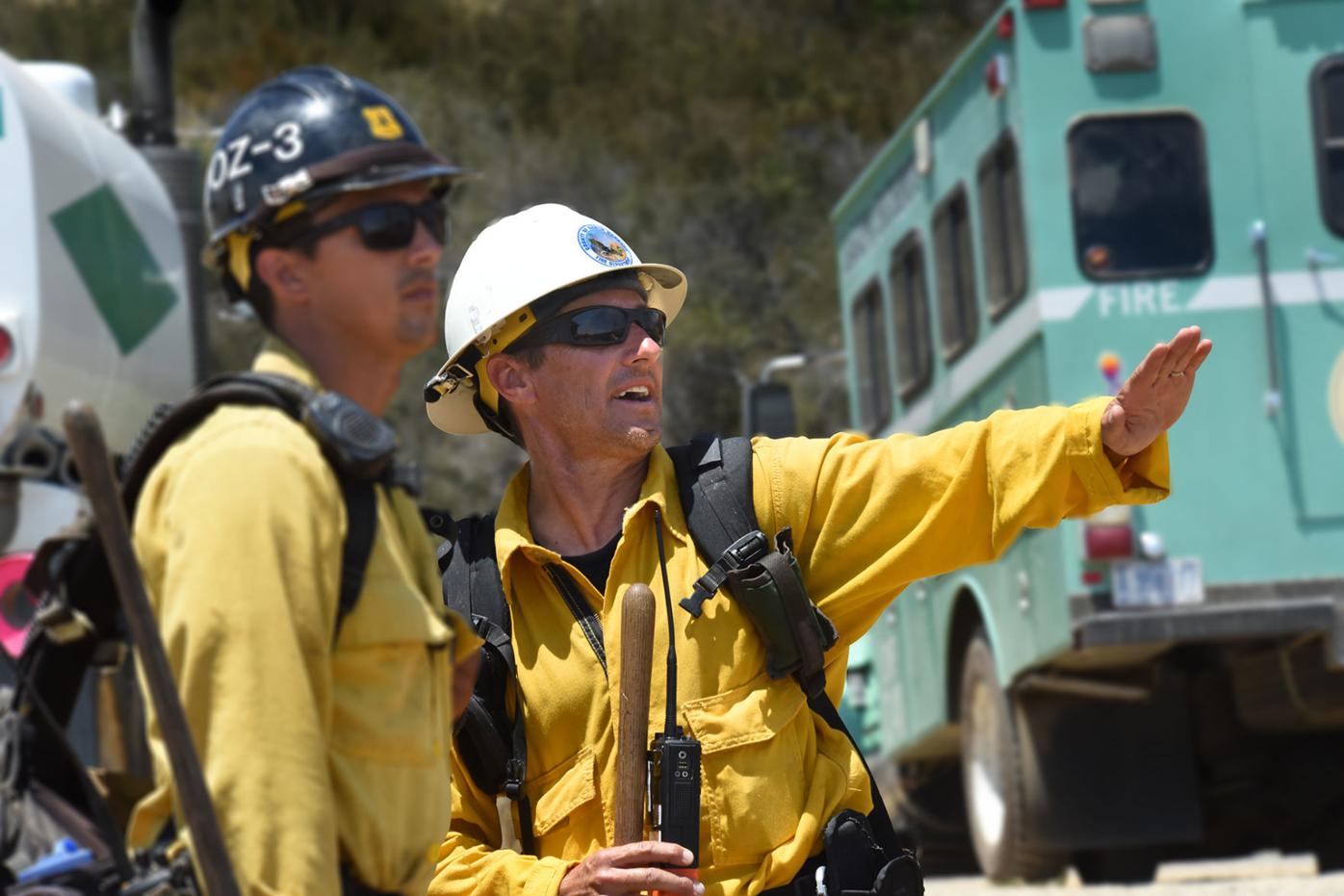 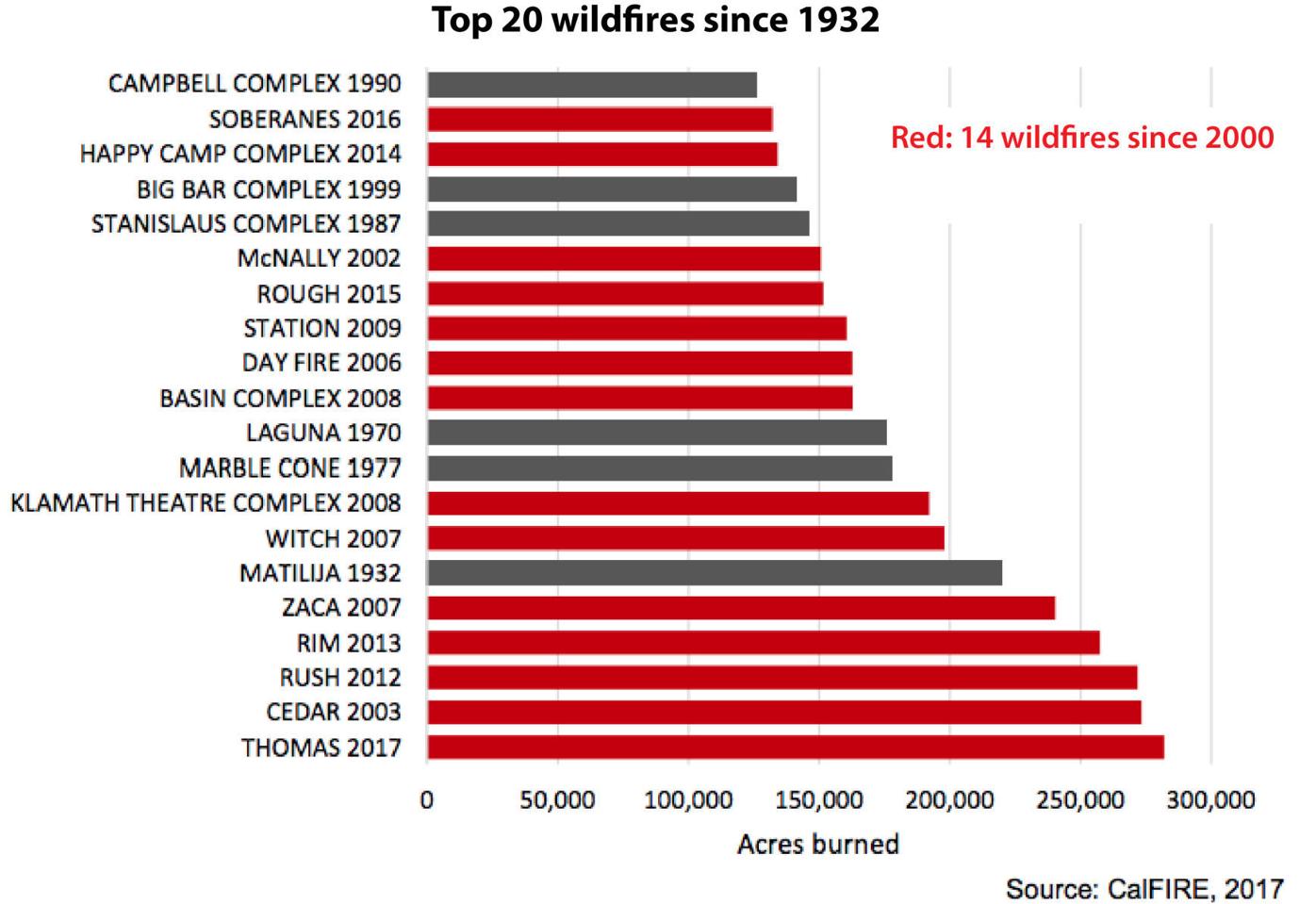 Santa Barbara County has had so many wildfires over the years that firefighters brought in from other areas to help fight the big ones have joked that it should be renamed Wildfire County.

“Every year we have 100 fires,” said Rob Hazard, division chief and fire marshal for the Santa Barbara County Fire Department. “But 96% of them are put out at less than 10 acres.”

State and federal officials have listed every city, town, village and cluster of homes in the county as “at risk” of wildfire, even places like Santa Maria and Guadalupe, which are surrounded by thousands of acres of farmland.

Fire officials attribute Santa Barbara County’s high risk, in part, to its location in the wildfire “Goldilocks zone." The county sits far enough north to get the winter rainfall needed to grow a healthy crop of fuels, but it’s also far enough south to feel the Southern California summer heat that cooks those fuels tinder-dry.

What is the ‘Goldilocks zone’?

Astronomers searching for planets that could sustain life look for an area they call the “Goldilocks zone,” taken from the folk tale of “Goldilocks and the Three Bears.

For astronomers, it’s the place where a planet would not be too close to nor too far from its star, thus maintaining a “just right” temperature.

And, because it's close to the large So Cal population centers, the county also draws hordes of weekenders and vacationers who raise the risk another notch.

“Generally, the [areas] most at risk are in close proximity to public involvement,” said Jimmy Harris, fire chief for Los Padres National Forest. “Ninety percent of fires are human-caused. … Most fires start within 20 feet of a roadway.”

Hot embers blown from an exhaust pipe, sparks scattered from a chain dragging along the asphalt and the extreme heat of a catalytic converter beneath a car pulled onto the shoulder are prime ignition sources for the dry grasses and brush that line the county’s roadways.

“Cars and power lines are the No. 1’s” for causing fires, Hazard said.

Firefighters look at the ingredients for cooking up wildfires as a triangle. One side is weather, another is topography and the third is fuels.

Hot and dry or cold and wet, flat and level or steep and rugged, virtually barren or a dense forest — combined in various ratios they define wildfire risk, which in the North County is different than that along the South Coast.

On the South Coast, the steep slopes of the Santa Ynez Mountains, covered with chaparral and close to dense urban areas, create “a classic wildland-urban interface” where wildfire risk is high, Hazard said.

The average slope in the county’s mountains is 40%, and that steep terrain with a lack of access roads makes it difficult for hand crews and bulldozers to fight South Coast fires, leaving much of the battle to aerial assaults.

In fact, some firefighters from other areas have said they would rather fight wildfires almost anywhere than southern Santa Barbara County because of the rugged terrain, baking heat and gale-force winds.

“We have our own unique wind condition,” Hazard said. “When there have been large fires, there have always been Sundowner winds at some point during the fire.”

The Sundowners not only drive the flames forward but heat the air as they rush downslope.

Without even consulting a map or list, Hazard cites the Coyote fire in 1964, the Romero Canyon fire in 1971, the Sycamore fire in 1977 and the Painted Cave fire in 1990 as wind-driven blazes that swept the steep South Coast slopes.

Where are the areas of lowest risk?

Fire officials say Santa Maria and Guadalupe have the lowest risk of wildfire in the county because they are surrounded by thousands of acres of agriculture.

But Santa Maria is not completely immune. The 1969 Payne fire scorched an oval-shaped area of probably less than 250 acres northeast of Old Orcutt.

While the county is blanketed with areas at risk for wildfire, there are some areas where the risk is significantly higher.

In Los Padres National Forest, the most at-risk areas are in the "backcountry" along highways 154 and 166, around the numerous campgrounds, astride the Santa Barbara urban-rural interface and in the areas that haven’t recently experienced a wildfire, Harris said.

“There’s a lot of growth around Figueroa,” he added. “Figueroa is one of the spots we need to focus on. And the [Highway] 166 corridor.”

In fact, the Tepusquet area east of Santa Maria hasn’t burned since 1953 when the Big Dalton fire raged through the area.

So for 65 years, the chaparral and trees have grown and matured, dropping leaves and branches to create a thick carpet of duff below a forest of fuels primed to burn.

Is agriculture a viable wildfire barrier?

A few people have suggested creating wide agricultural or green spaces around communities in areas of high wildfire risk.

But while irrigated, green, high-moisture plants might prevent wildfire from sweeping through a community, firefighters say the idea is impractical for many reasons.

Not all soil is suitable for agriculture, and neither is the climate in many high-risk areas. Getting all landowners around the fringe of a community to commit to agriculture would be impossible, and governments wouldn’t have the amount of money needed to buy up enough land to surround a community with a park. Plus, communities inevitably grow and would outstrip the green space.

Firefighters say a better solution is for each property owner to create their own defensible space and fire-harden their structures.

In the Santa Ynez Valley and the foothills surrounding Santa Ynez, the ratio of elements in the wildfire triangle change, and so does the risk.

“The risk [there] is more defined by hotter days throughout the summer, but there are also lighter fuels,” Hazard said.

Harris agreed, noting the rolling hills are mostly covered with grasses, “light, flashy fuels, where fires are easier to suppress, easy to put out with aircraft and bulldozers.”

Occasionally there are fires in the wine country, Hazard said, but the topography is different — the hills are not as steep, and irrigated crops aren’t as volatile.

There are areas in the county where many wildfires ignite, but none of them burn large areas, much less balloon into monsters.

“We have lots of ignitions where there are no fire hazards,” Hazard said. “Where we don’t have a history of big fires is Buellton, Los Alamos, Orcutt. The topography consists of lighter fuels, there’s lots of access and they have moderate weather.”

A map of fire history in the county bears out that assessment, as a swath of land sweeping from Buellton through Guadalupe shows a lot of ignition points but burn footprints sometimes too small to even show up.

Hazard said the risk to Santa Maria and Guadalupe is extremely low because they are insulated by miles of agriculture, perhaps the best buffer there is against wildfire.

Santa Barbara County's mix of topography, abundant fuels and Sundowner winds presents a specific set of challenges for firefighters who say they'd rather fight wildfires almost anywhere than the place some of them have dubbed Wildfire County.

More in Series: Wildfire County - Planning for the next big blaze (2 of 23)