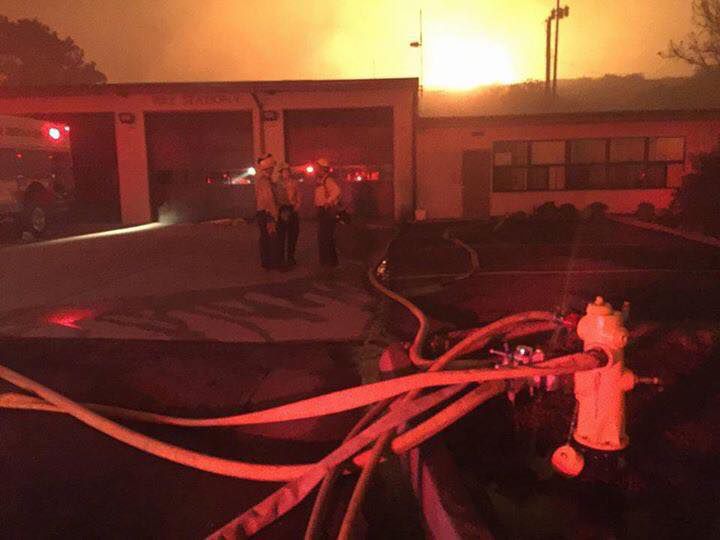 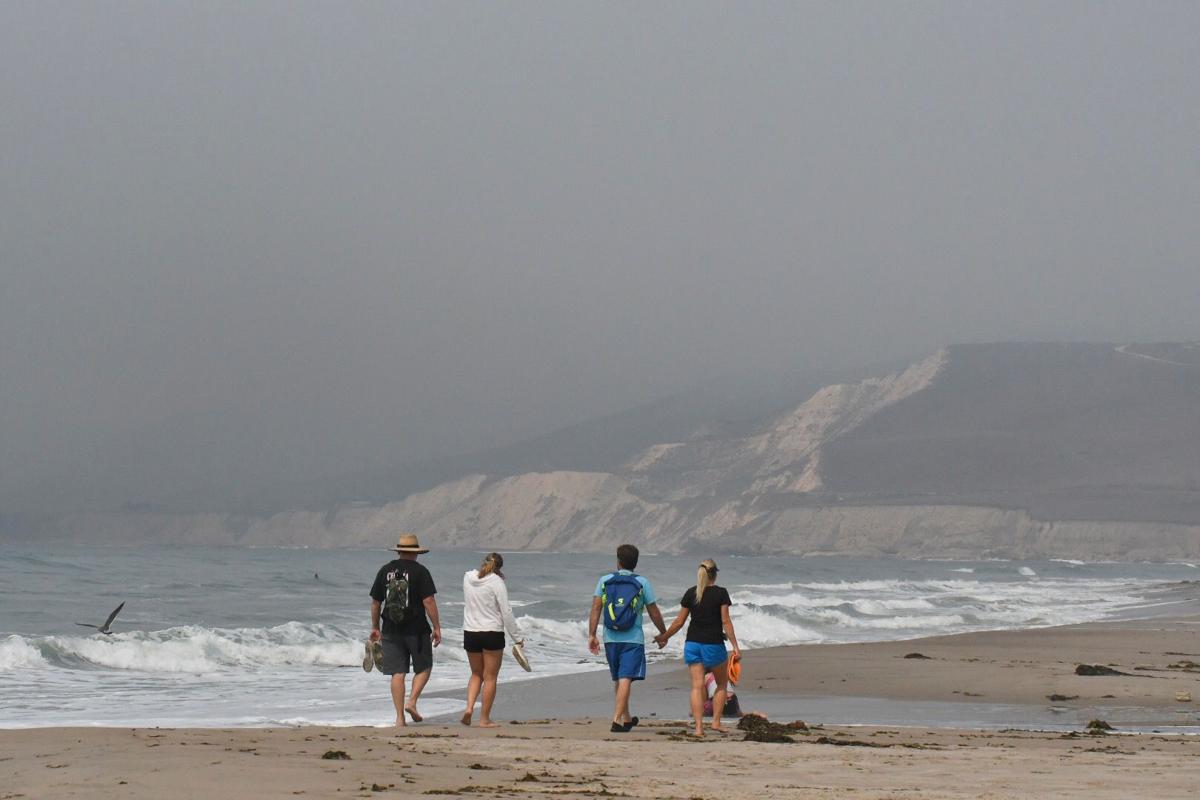 Jalama beachgoers walk through smoke from the Canyon fire on Tuesday morning. 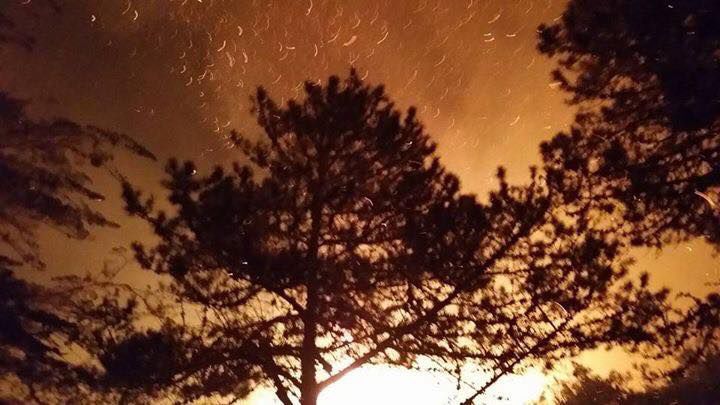 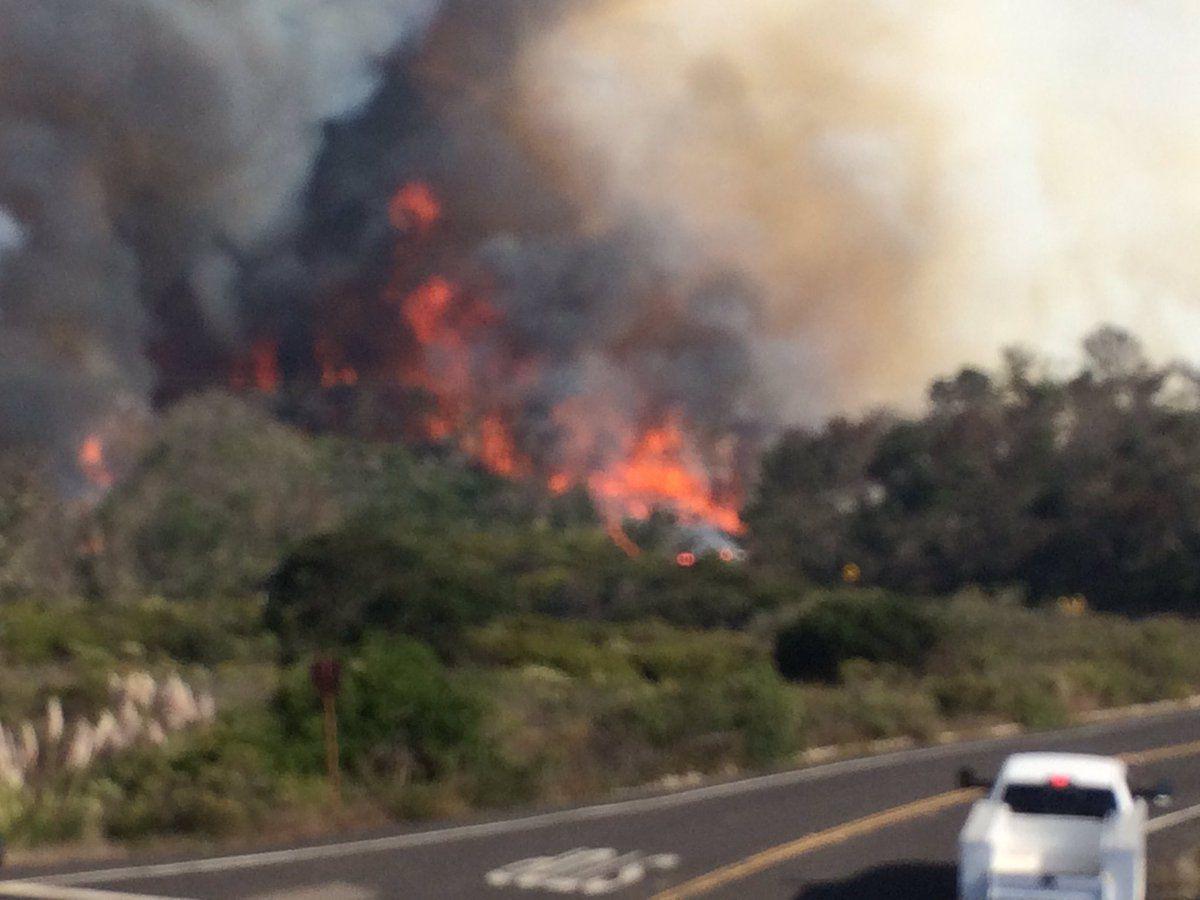 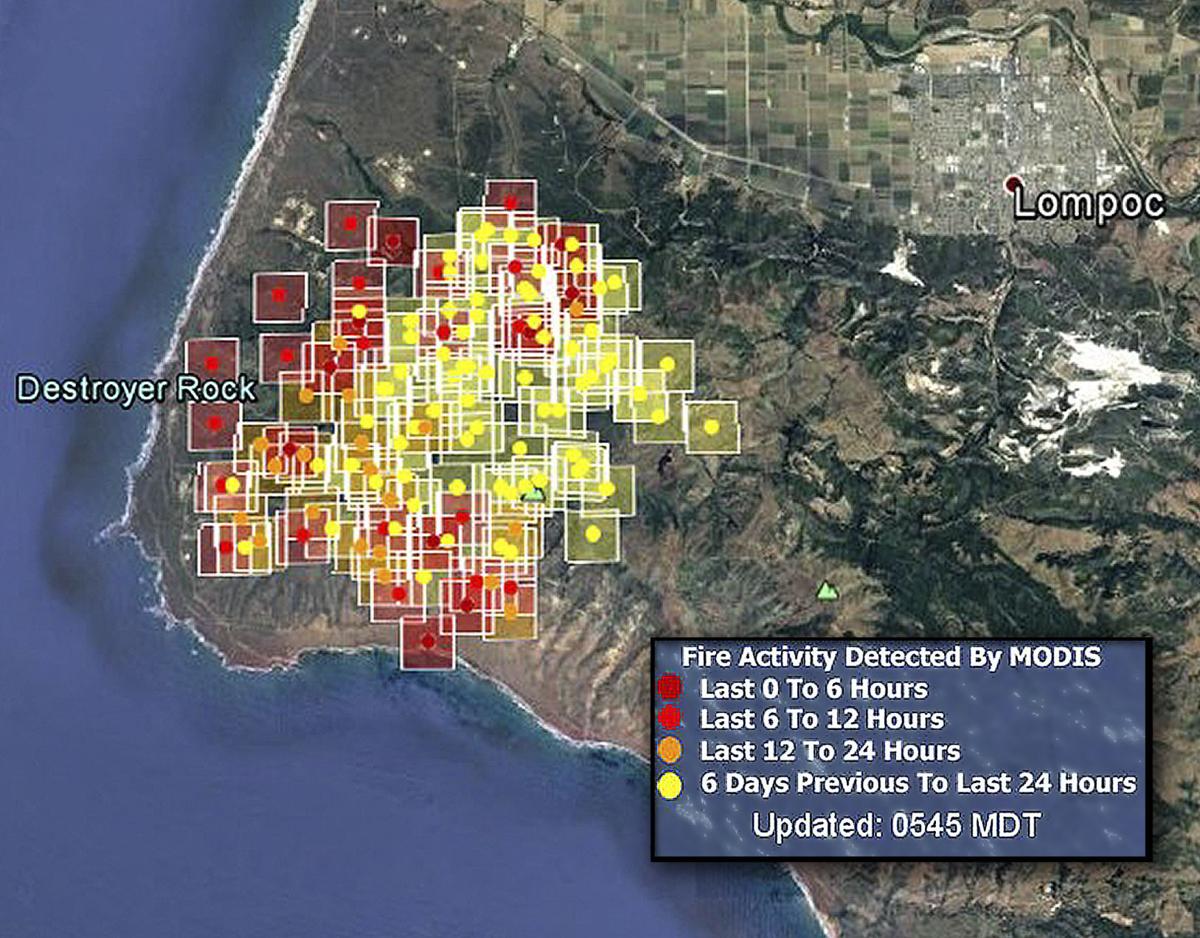 Fire activity for the Canyon fire burning Tuesday morning at Vandenberg Air Force Base is shown in a computer map from the US Forest Service.

A wildfire that sparked Saturday night at Vandenberg Air Force Base grew to more than 12,000 acres by Tuesday night and was about 45-percent contained, according to base officials.

About 1,056 firefighters from over 50 agencies have been battling the blaze, dubbed the Canyon Fire.

Fire Station 4 on base was nearly destroyed Monday evening due to intense fire conditions, VAFB Assistant Fire Chief Wayne Seda said at a 2 p.m. news conference Tuesday. Crews, however, were able to save the station and other structures under siege. Four firefighters — two on Sunday and two on Monday — have also suffered "minor" injuries due to smoke inhalation, Seda said.

As conditions allow, crews will continue to extend existing containment lines and build new ones.

Despite progress made, the Canyon fire remains significant and unpredictable, officials said. For safety reasons and to prevent any interference with the fire response, South Base access continues to be limited to emergency personnel, officials said.

Seda said that crews are anticipating a shift in upper winds on Thursday and are preparing for that.

Teams will work to strengthen defenses and fire breaks along the east and west boundaries on Thursday, while protecting the launch complexes and preventing the fire from spreading off base property, officials said.

The fire caused the postponement of an Atlas V rocket launch that was scheduled for Sunday, but Seda said Tuesday that officials don't believe any launch facilities are in immediate danger.

“It’s a concern, but we have several crews around those critical assets who are doing prep work,” he said.

Personnel from the 30th Security Forces have established roadblocks along West Ocean Avenue to minimize traffic congestion and to facilitate fire response forces entering and leaving South Base. Base officials are asking personnel to remain clear of West Ocean Avenue between Vandenberg's North and South bases.

Smoke from the Canyon fire is causing air quality to be unhealthy for sensitive groups in Lompoc and officials are advising everyone in that area to limit prolonged or heavy exertion outdoors, and telling people with heart or lung disease, children and older adults to limit time outdoors and be extra careful.

Major Kevin Haines, with VAFB's 30th medical group, said Tuesday that biologists have been testing particle levels in the air at various locations around the base since noon Monday. He said the results of those tests have shown elevated levels, but nothing extreme.

He advised all county residents to check for updates on the air quality at www.airnow.gov. He also advised that people utilize common sense.

“If you see (smoke clouds) blowing away from you, then you’re probably in pretty good shape,” he said. “If you see it coming toward you, it’s probably not a good idea to go out and run a marathon or do something like that.”

A team of resource advisers are supporting the fire response by locating and identifying natural and cultural resources threatened by the fire. Some of these resources include cultural sites related to the Chumash, wildlife habitats and watershed concerns.

Seda confirmed Tuesday that crews are battling the fire using water from portable stations that have been set up, as well as from the nearby Pacific Ocean.

The fire broke out about 5:20 p.m. Saturday near Arguello and Santa Ynez Ridge roads and spread rapidly through heavy fuel, scorching 50 acres by 11 p.m., a County Fire spokesman said.

Jalama beachgoers walk through smoke from the Canyon fire on Tuesday morning.

Fire activity for the Canyon fire burning Tuesday morning at Vandenberg Air Force Base is shown in a computer map from the US Forest Service.